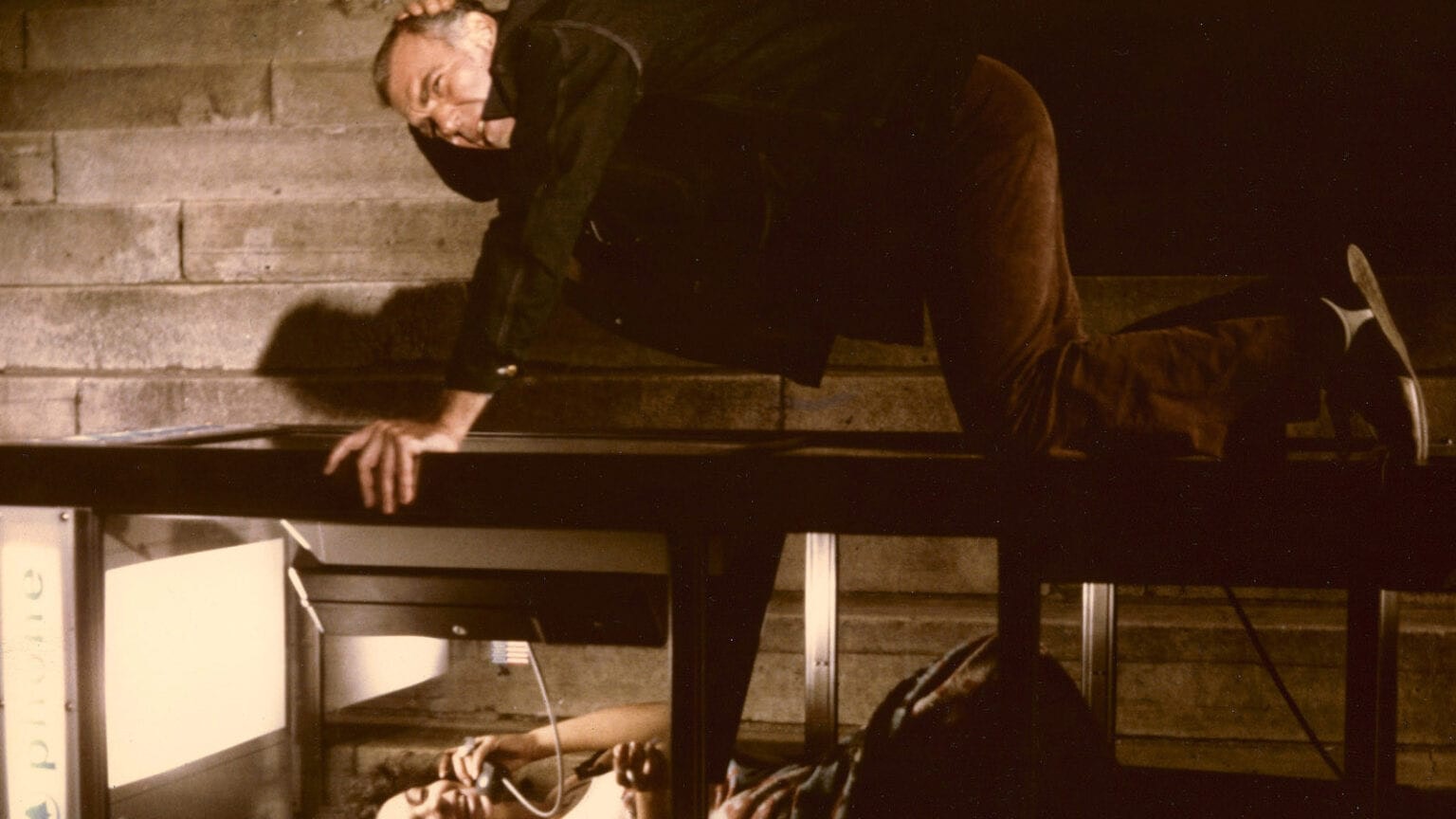 Woof!: Making The Werewolf of Washington

The long, bumpy road from crazy idea to the release of a definitive version nearly 50 years later, as told by the film’s writer/director. 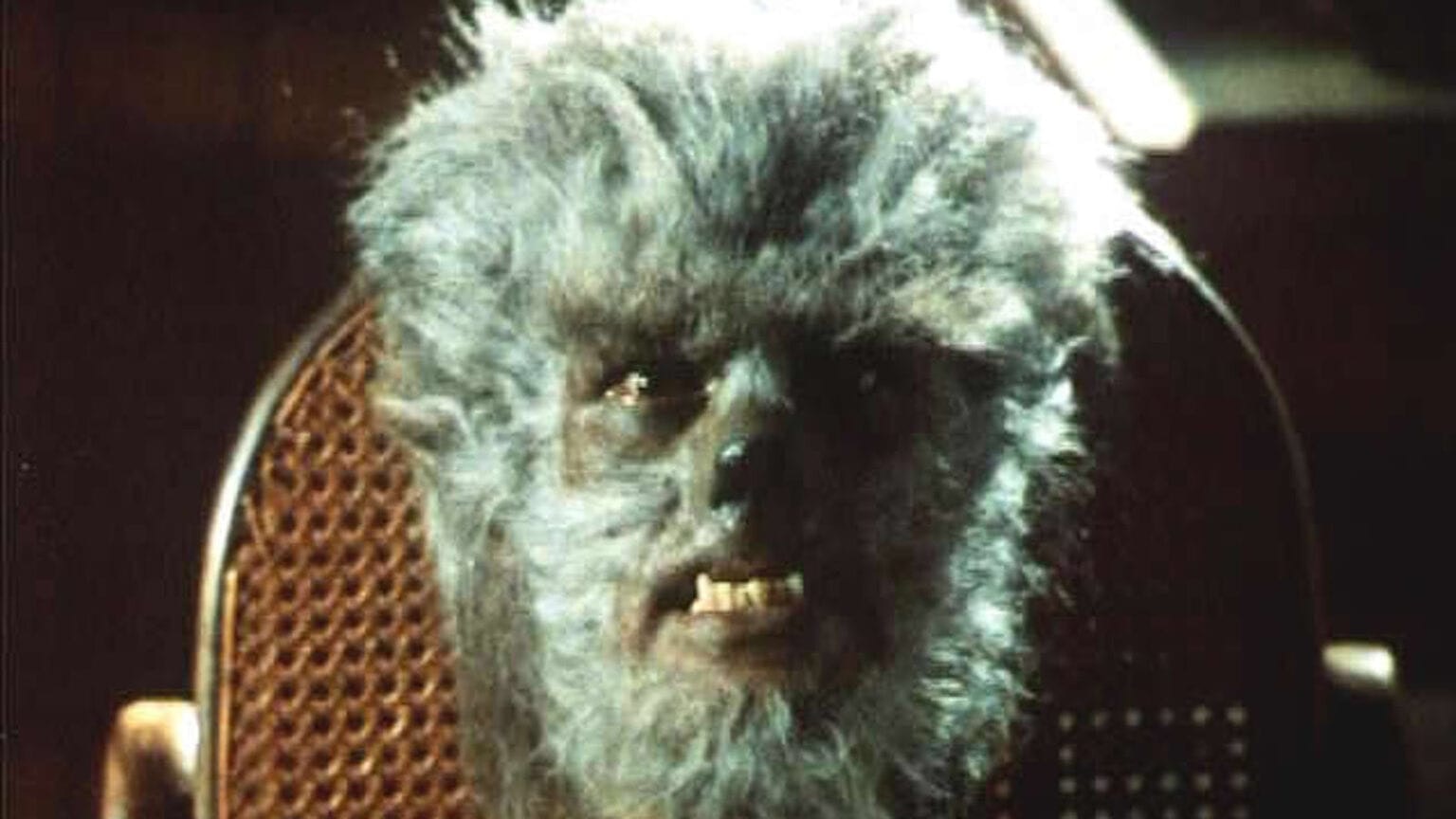 I grew up in a Bronx Jewish family who worshiped the Trinity—Roosevelt, Truman and, The Holy Democratic Party. And, as we know, the religion of our childhood haunts us forever. So maybe that was the real start of The Werewolf of Washington.

And… the other inspiration for the film! At the age of 8 my parents let me to go to the movies alone—and one Saturday morning the Zenith played The Wolf Man with Lon Chaney Jr. Traumatized doesn’t even begin to cover it. I never saw another horror film again, depriving myself of the pleasures of Frankenstein and Dracula.

Speed ahead to the late 1950s. After graduating Columbia, I wandered the boulevards trying to write the Great American Novel. I didn’t realize it required sitting down. No wonder I could never get past the Great American First Sentence.

And then one day in 1960—an epiphany! I was stunned by Antonioni’s L’Avventura!  And, soon after, by Fellini and the very undervalued Ermanno Olmi. I saw that cinema could crystallize the same depths of emotion the novel could. I’d love to try that! And as much as writing fiction eluded me, I seemed to master every aspect of filmmaking with pleasure and ease.

Within 10 years I made a film I was extremely proud of—for $50,000—Coming Apart. But it proved much too controversial and never made any money. And then I couldn’t make another film. Producers would greet my submissions with, “Man in angst again?!”

I was broke, in growing debt, unable to pay my rent. So, to the unanimous disapproval of my friends, I decided to make a werewolf movie. The same producers gave me an advance of $1,000 on the idea alone. I could pay my rent and some of my debts, and even rent a summer share on Fire Island.

I spent the early part of June in the still, empty beach house and wrote the screenplay in 10 days. But in searching for a plot, the ghost of politics reclaimed me—the Nixon Presidency was leaning hard on our democracy!

Hence, The Werewolf of Washington! 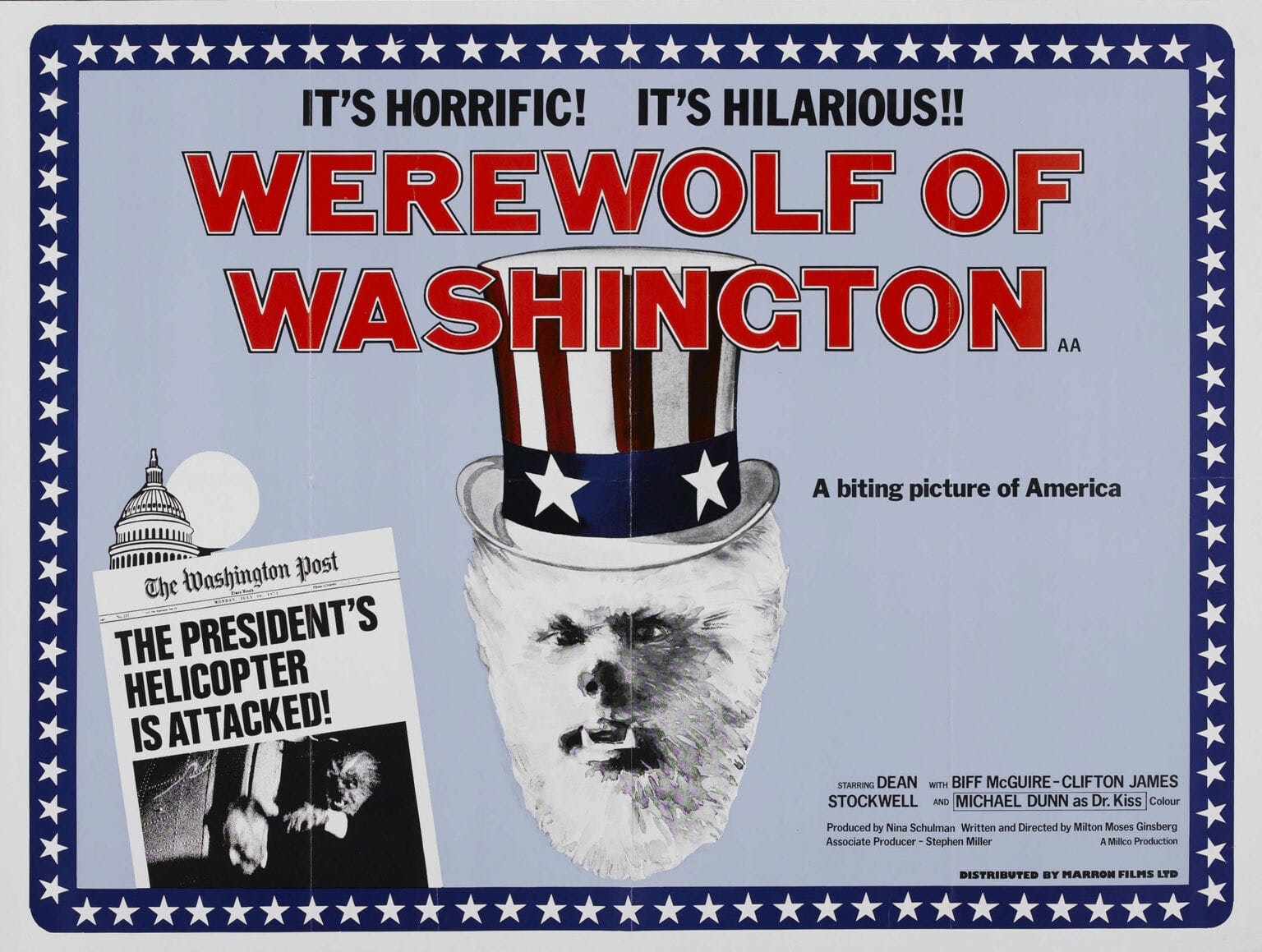 I presented the script to the producers. I could do it for 100 grand, I told them. Their response: “Are you crazy? You’re attacking the President of the United States! We don’t want to have anything to do with this script! You owe us nothing, we owe you nothing! Now get out of here and never come back. Oh, you do owe us one thing—please don’t ever tell anyone we advanced you the money for this monstrosity.”

In fact, all the characters in the film came out of Nixon’s orbit, including the publisher of his dreaded Washington Post. Dean Stockwell’s character even anticipates John Dean, who’d I’d never even heard of when I wrote this script. Listen, there’s a John Dean in every administration.

My girlfriend at the time optioned the script for about a grand and raised 80 percent of the 100 g’s we would need. Another friend, Herb, who had recently come into some money, put in the last 20 g’s, laughing as he wrote the check because he knew he would never see a cent. But, listen, anything for a friend...

Then we set out to find the wolf. The very concept of the film was clearly an inspiration for two of the actors we sent it to. Gene Wilder immediately went on to make Young Frankenstein and George Hamilton to create Love at First Bite. It would thrill me to match my 100-grand film against their million-dollar movies any day. But I am rather jealous that they got paid for their work.

Dean Stockwell was the actor who finally bit, so to speak—and his performance was genius. The actor we chose for President, Biff McGuire, performed even more brilliantly.  Immodesty aside, you have to see Werewolf, certainly for their performances—and for half-dozen of the funniest scenes you will ever see in your life. I spent a considerable amount of time rolling around on the floor trying to muffle my laughter to keep from ruining the audio. 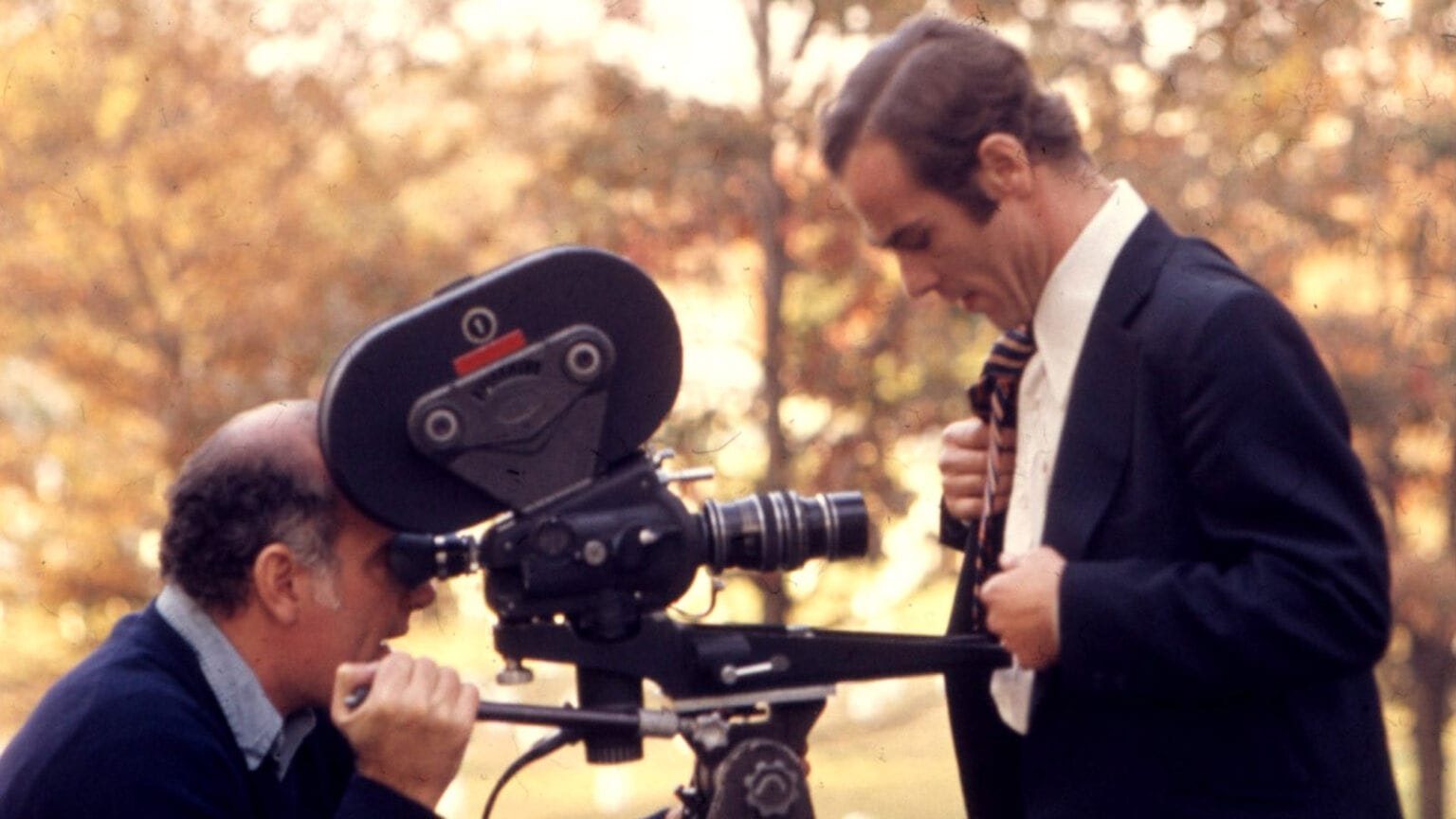 We knew 40 locations on 100 g budget would prove tough. It translated to very limited camera movement. And if you couldn’t shoot a scene on the day it was planned, it wasn’t going to be in the film.

All the transformations from man to beast: the rocking chair, the helicopter, the transformation in reverse on the red carpet—all—were done in less than half a day, by changing the cloth behind Dean every time another level of makeup was added. It was a wolf brilliantly designed by Bob O’Bradovitch.

The true genius behind the production, though, was a mad fellow named David Appleton, who sported short pants in any kind of weather and long hair and a pointy beard—D’Artagnan in hot pants with a penchant for yammering. But then, coming from the Bronx, I’ve always had a profound affection for lunatics. Without David’s production virtuosity, there would have been no film!

We filmed for a little more than a month, mostly in the Glen Cove area of Long Island. Brooklyn Borough Hall provided the steps for the Capitol, with the addition of a borrowed phone booth. A few of us went down to Washington for a day to film exteriors.

But, finally, we were too late. Werewolf came out a few months after the true horrors of Watergate surfaced. The reality was unbearably worse than I had even imagined. Or maybe distributors were still timid, afraid of Nixon. In any case, The Werewolf of Washington was never released!

As a director, I fell into oblivion and never made another dramatic film again. I went back to editing, for which I seemed to have an overabundance of the appropriate genes—edited three Oscar-winning docs, more than anybody else, I suspect. But who even knows or cares? It was writing and directing dramatic films I craved. About Man in Angst!

A final note: I had agreed to deliver a 90-minute film or I would lose my participation in the profits. Who could imagine there wouldn’t be any profits?

Leaving me for the last five decades needing to edit Werewolf to the form and length it truly desired—and start the film off in the black-and-white textures of Lon Chaney Jr.’s original Wolf Man. And now I have! Never leave a pair of scissors around an old editor! • 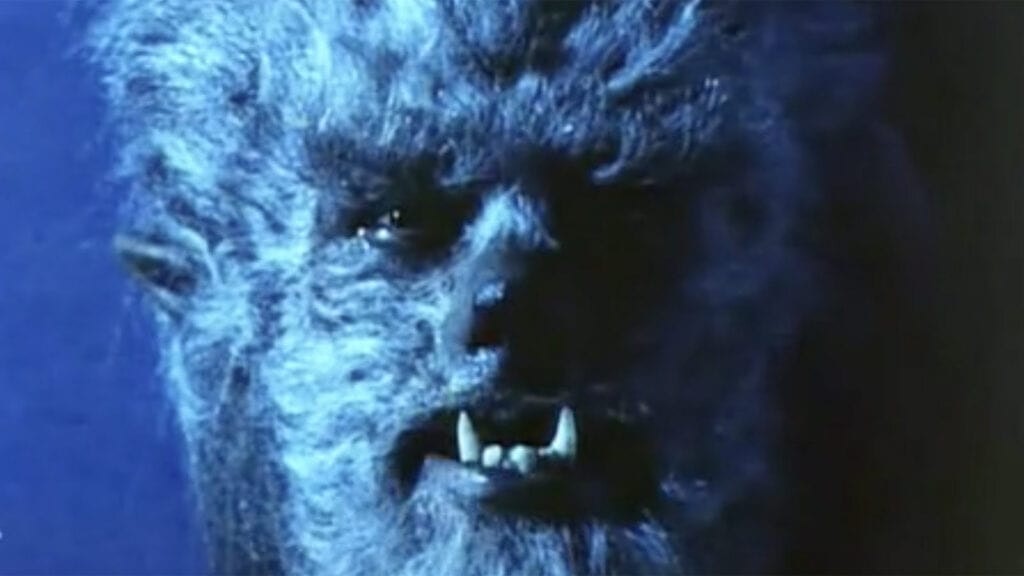