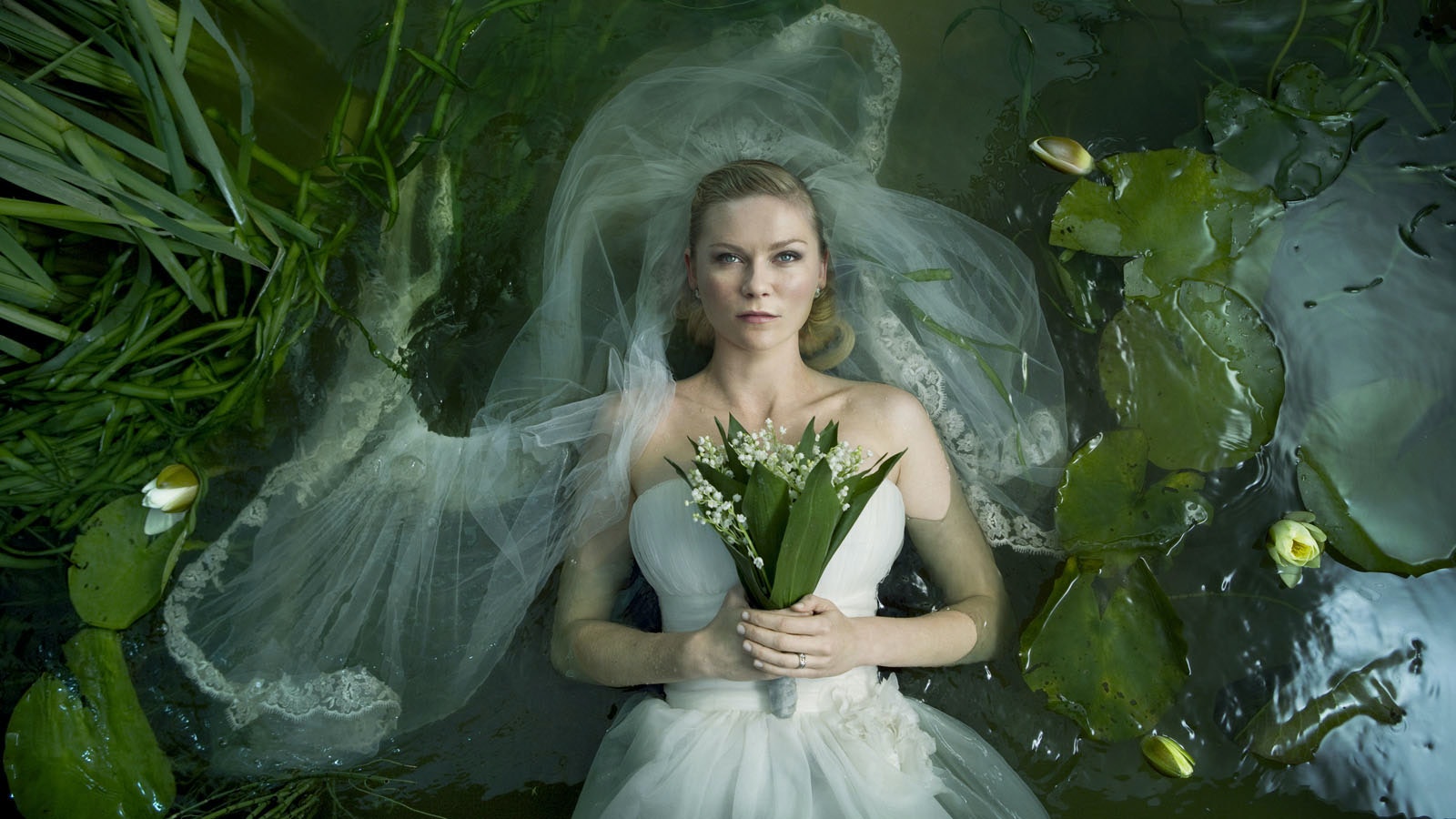 To Go on Living 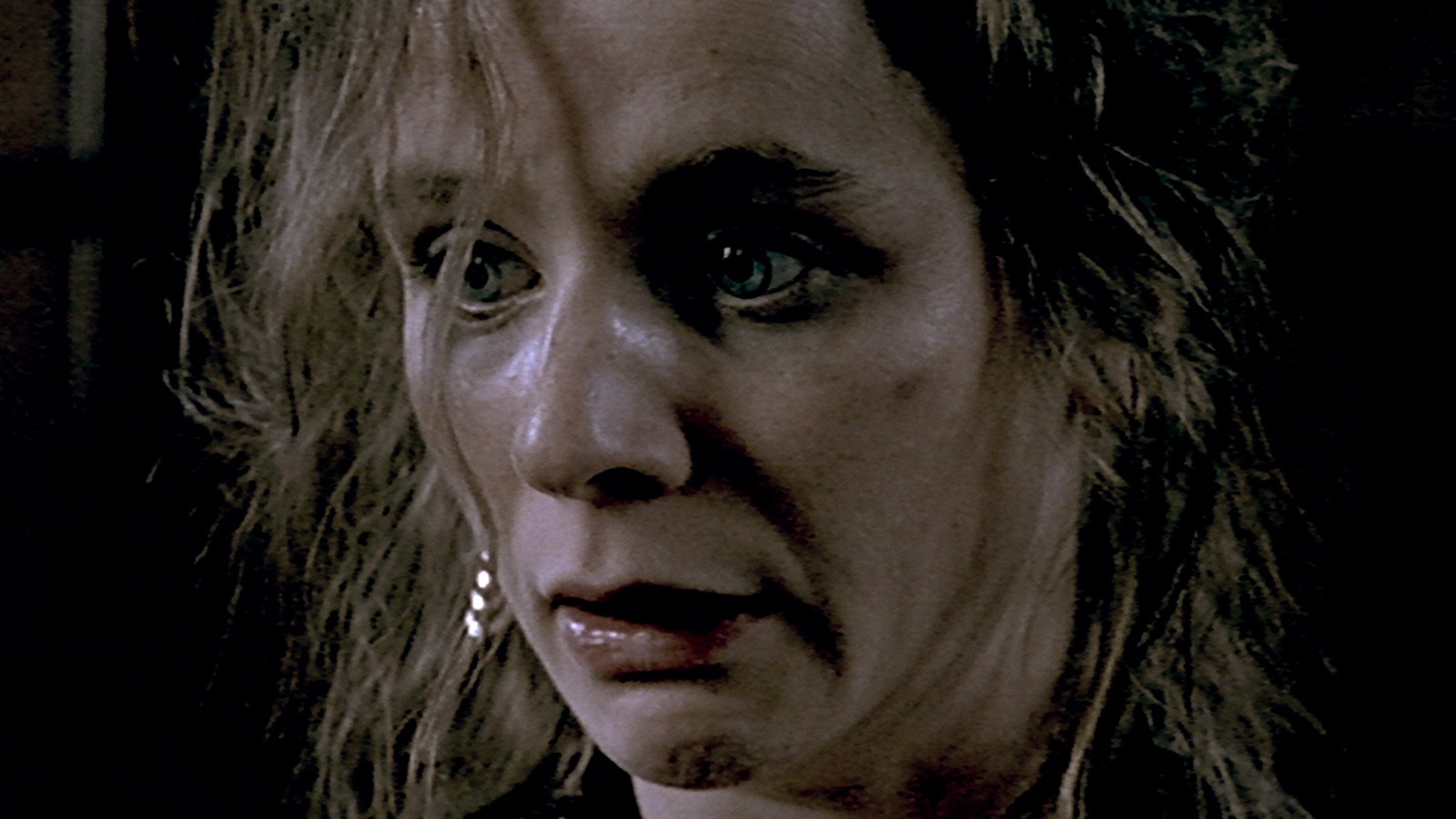 Whatever he takes for story—capital punishment, sex, religion—Lars von Trier is an artist of female suffering. His theory of the meaning of female suffering is most plainly on view in Breaking the Waves, in which an oilman (the virogorous Stellan Skarsgård) named Jan, who has been paralyzed from the neck down, persuades his deeply religious and/or nutty wife Bess (Emily Watson) to have sex with other men and describe it to him. Jan believes this will bring them closer together; what she does with others will be like she did with him. It is telling that in von Trier’s world, the pursuit of holy infidelity becomes also a pursuit of self-harm and violence; the film’s fascination is with how goodness and purity can only be tested through acts of degradation. Bess’s final act of faith and sacrifice—she seeks out a violent sexual encounter that causes her death—ultimately restores her husband to mobility and freedom. Von Trier has been accused of exploiting the audience and making his characters automata to illustrate his ideas, but the results can be profound testaments to how cinematography and performance can overcome the limitations of sensation. Breaking the Waves may be an allegory of how male artists increase in power through female abasement, but it is the artistry of Emily Watson that one remembers—assuming you can see through your tears.

Kirsten Dunst, one of the finest actors of her generation, has been underutilized by a Hollywood that doesn’t know what to do with her. She was made to suffer not only in von Trier’s Melancholia, but when she appeared with him at the infamous Cannes press conference where he expressed sympathy for Hitler. “Stop,” she whispers to him on the video, a humiliated smile helplessly spread across her face. But he cannot be stopped, anymore than the Earth can be saved from destruction by the planet Melancholia.

The first shot is Dunst’s grim, unsmiling face. Then dead birds fall out of the sky behind her. There follow eight minutes of poetic, non-narrative imagery—a black stallion coming to its knees beneath the Northern Lights, electricity shooting out of Dunst’s fingertips. She tries to run through the forest in a huge wedding dress, but vines are pulling her back, and the film is moving in slow-motion. It is odd to contemplate Penélope Cruz, who was set to play the role until her Pirates of the Caribbean shooting schedule interfered, in these tableaux, as well as in the narrative that follows. Dunst has a capacity for bitter resignation that is all her own. She plays Justine, whose marriage unravels over the course of a lavish wedding reception, as her husband, the innocent Alexander Skarsgård, realizes that he cannot make her happy, and nothing can. She doesn’t care that he’s bought them a plot of land to call their own where sweet apples grow. What good are Edenic fantasies when God has sent a flood?

Unlike von Trier’s other suffering women, the women in Melancholia are not punished by an ignorant or close-minded community, by acts of personal violence or crime, or by the state. The source of suffering is not social; it is located at once inside the self and in the universe writ large.

Perhaps it should not surprise us when we learn that Justine works in advertising. Her specialty is coming up with taglines: words that can sell images. The cheap, fashion photo irony of Dunst doing all sorts of inappropriate things in her enormous ball gown—driving a limo, falling asleep, having sex with a wedding guest in a field—is so skillfully handled that it becomes art. The wedding is grotesque excess on Justine’s brother-in-law’s estate. It is important that Justine’s family be filthy rich. One of the most persistent fantasies of the climate crisis is that the wealthy will be able to buy their way out of it, whether through storehouses, underground bunkers, or private firefighting forces. It is fundamental to von Trier’s vision that no one is able to escape. (Yet even in a film that thinks the unthinkable—existential annihilation—money still functions as something unspeakable. Justine’s brother-in-law can’t bring himself to name the exact amount the wedding cost him. “For some people, an arm and a leg” is what he comes up with.) In the second act, Justine and her sister Claire (a panicked Charlotte Gainsbourg), await the apocalypse with Claire’s astronomer husband and son. Melancholia hangs like a bomb in the sky.

The prologue has prepared us for the end, so there is no suspense, or rather, the suspense has to do with how the characters will comport themselves. Claire suggests a glass of wine on the terrace. Justine sneers. Unlike von Trier’s other suffering women, the women in Melancholia are not punished by an ignorant or close-minded community, by acts of personal violence or crime, or by the state. The source of suffering is not social; it is located at once inside the self and in the universe writ large. There is no redemption, no miracle, and no satisfaction of revenge to help us achieve closure. There is also no reconciliation; the sisters do not suddenly understand each other. The film is entirely committed to its pessimism.

What there is (and it is hardly recompense) is the grim satisfaction of knowledge borne out. Justine’s depression has given her an advantage. “I know things,” she says. Her example of something she knows, however, is stupid: how many beans were in the jar at the wedding reception. What she knows is less significant than how knowing it allows her to cope, with a kind of grim acceptance and grace. She has the calmness that possesses someone whose worst fears have been confirmed, who can finally say, with satisfaction, that their sadness is the end of the world. “I know we’re alone,” she says, refuting Claire’s desperate hope that even if life on Earth is destroyed, there might be life elsewhere in the universe. Life itself is, Justine says, “evil,” and when the end comes, it is total and cataclysmic and there will be nothing to grieve. As the planet Melancholia approaches Earth, Justine, who had been so weak she could hardly stand, gathers strength. The end of everything is not a tragedy, but an aesthetic opportunity. 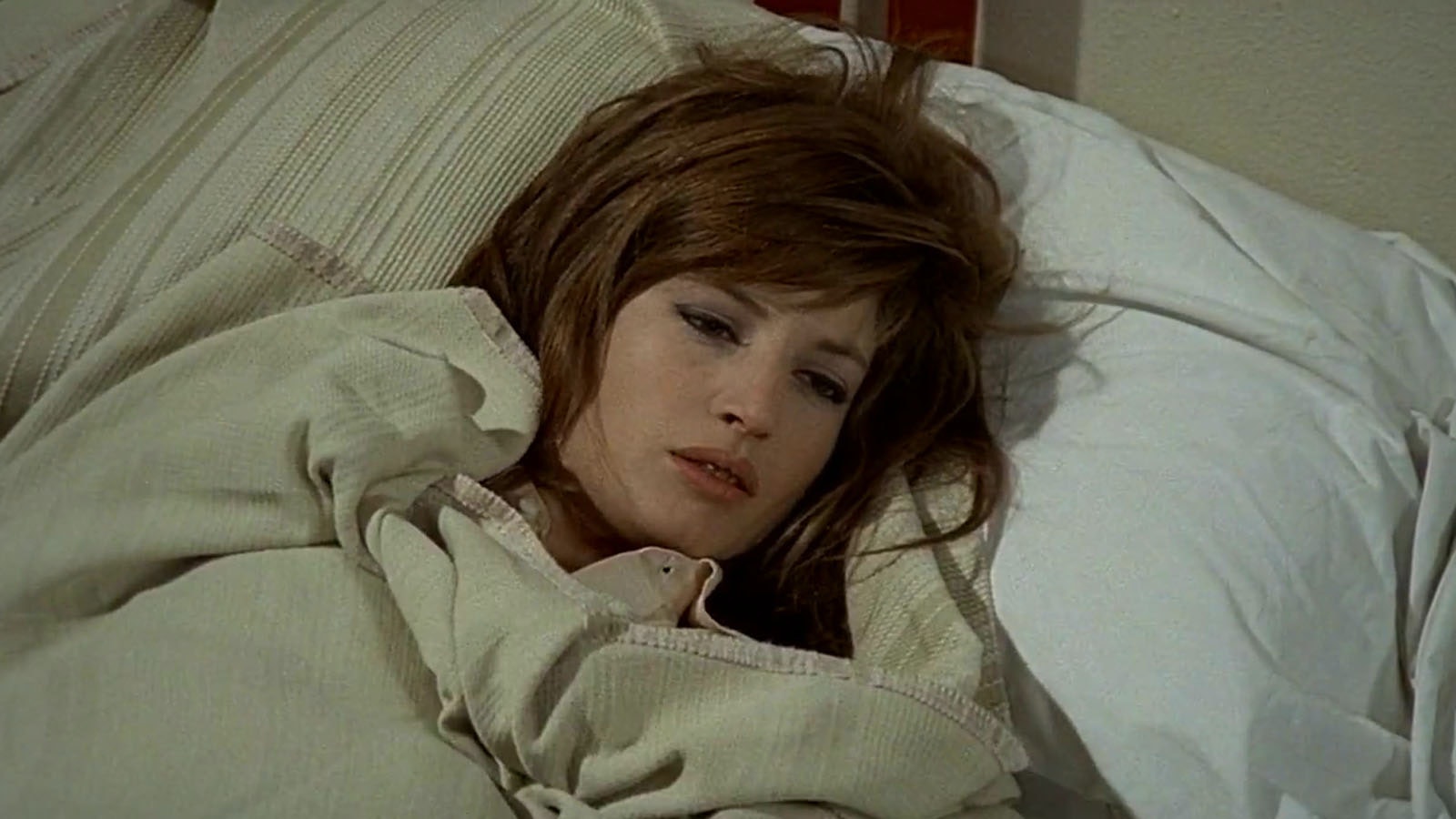 Nearly 50 years before Melancholia, Michelangelo Antonioni’s masterpiece of alienated beauty, Red Desert, also placed female despair amid environmental foreboding. Red Desert features Monica Vitti as Guiliana, a bundle of nerves who traipses in short skirts and inappropriate footwear throughout bleak industrial landscapes spewing toxic fumes. We learn from Guiliana’s useless, rationalist husband Ugo that she has been fearful since surviving a car accident, but she confides in Ugo’s friend, with whom she has a passionate sort-of affair, that she has been suicidal. Unlike Justine, Guiliana doesn’t have the comfort of knowledge. “There’s something terrible about reality, and I don’t know what it is,” she cries. “No one will tell me.” In the depths of despair, she tries to get on a ship leaving the docks, but a sailor stops her. They don’t speak the same language. One fears the situation will escalate to rape or physical violence, but Guiliana just walks down the gangplank and makes a speech that he may or may not understand. “I’m not a single woman,” she says, “though sometimes I feel sort of… separated. No, not from my husband. Our bodies are all separate. If you prick me, you don’t suffer.”

Depression is a state of separation, but what drives Guiliana’s despair is fear—not that she will die, but that she will have to go on living. It is naïve to point to the factory that spews poisonous yellow smoke and say that it is bad. Antonioni is as enamored of the industrial landscape as Von Trier is of the looming planet. The point of Red Desert is that when factories spew toxins, the birds have to learn to fly somewhere else. Guiliana is grieving for a world in which she felt connected and unalienated, but if that world ever existed, it is gone now. She has to find some way of, as Antonioni said, “adjusting.”

Melancholia mocks Claire’s fear of dying while worshipping Justine’s fear of life. It may look like a study in climate grief, but it has little to do with the actual climate crisis we are in. Its temporal structure is more related to nuclear war, to the notion of a total and immediate annihilation. Climate crisis is a new kind of ending: an ending that has no end, only a middle. It would be easier if the world was about to blow up. Then there would be nothing to do but, as von Trier’s characters attempt, take a front-row seat, and find in the last moments the courage to treat the children among us with compassion. But the world isn’t going to blow up all at once. It has been blowing up, and will continue to blow up, here and there, ending for some and not others, then ending for those, too, setting off migration and instability, fires and floods. There will be so much time to respond, and no time at all. It feels good to weep over our collective demise, to experience total helplessness. But after Melancholia ends, we are still here. • 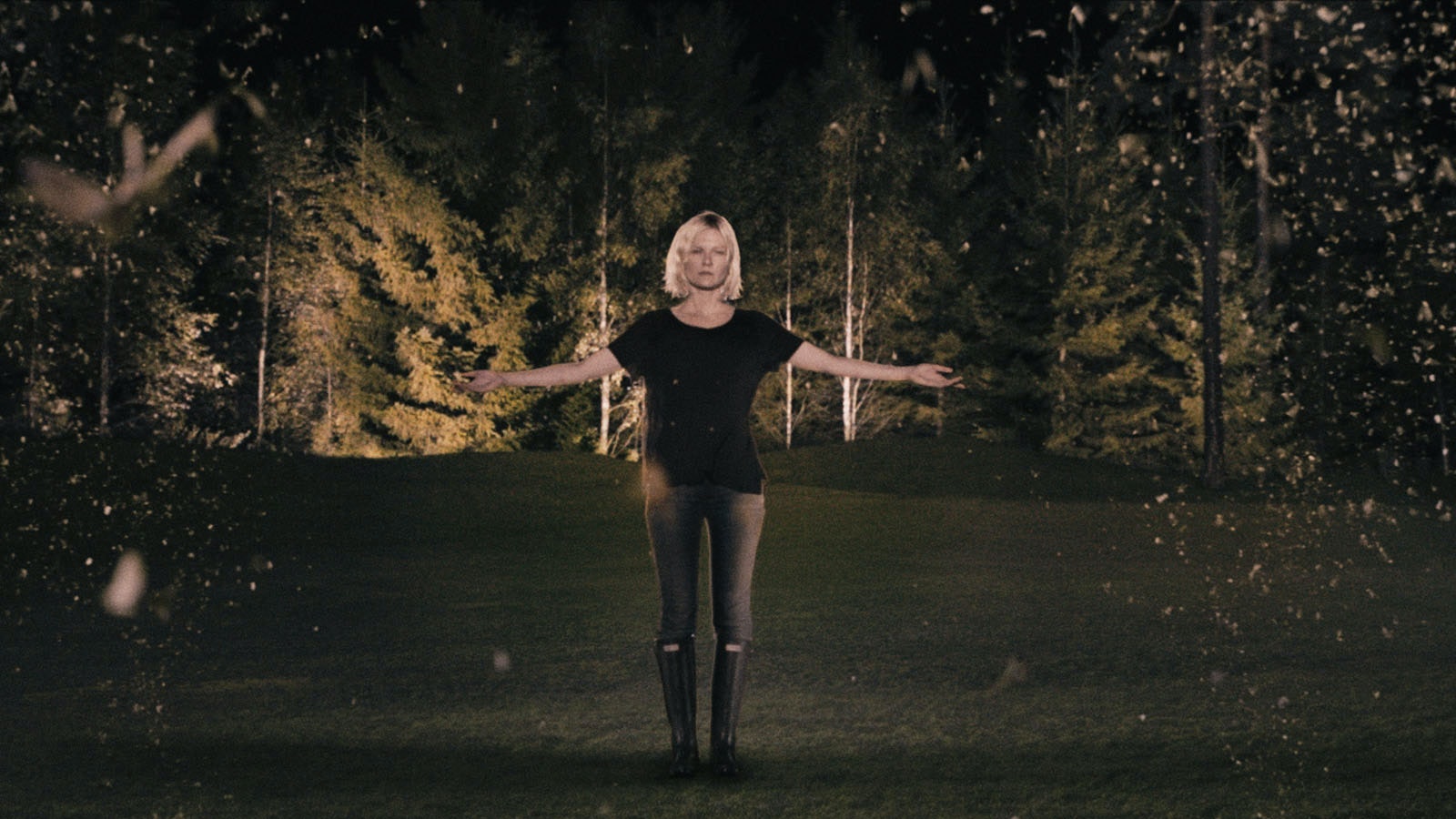