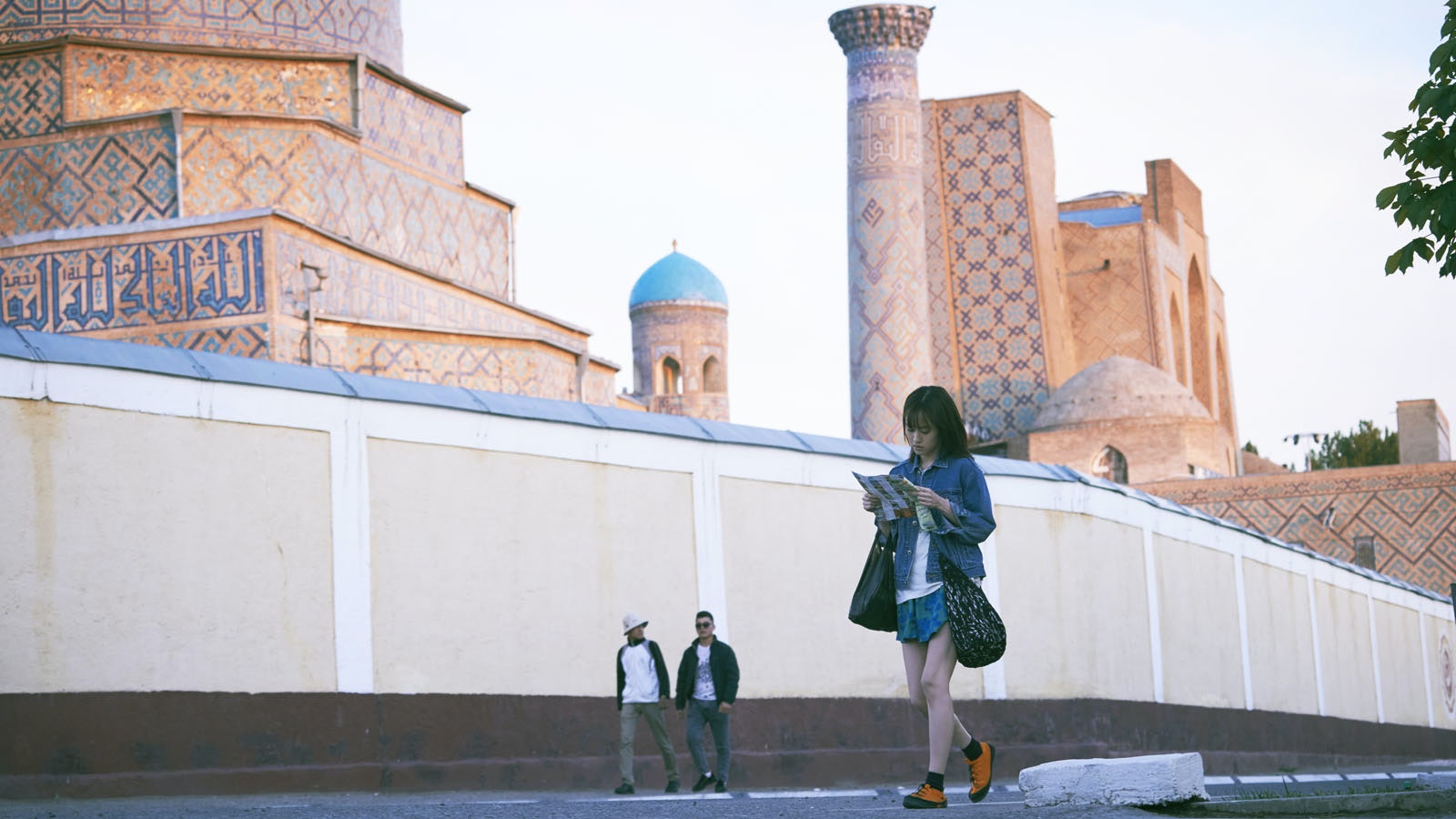 Kiyoshi Kurosawa’s films of isolation perfectly suit the mood of today, but To the Ends of the Earth, in which a young woman feels lost in a faraway land, brings less doom to the usual reality-fantasy mix. 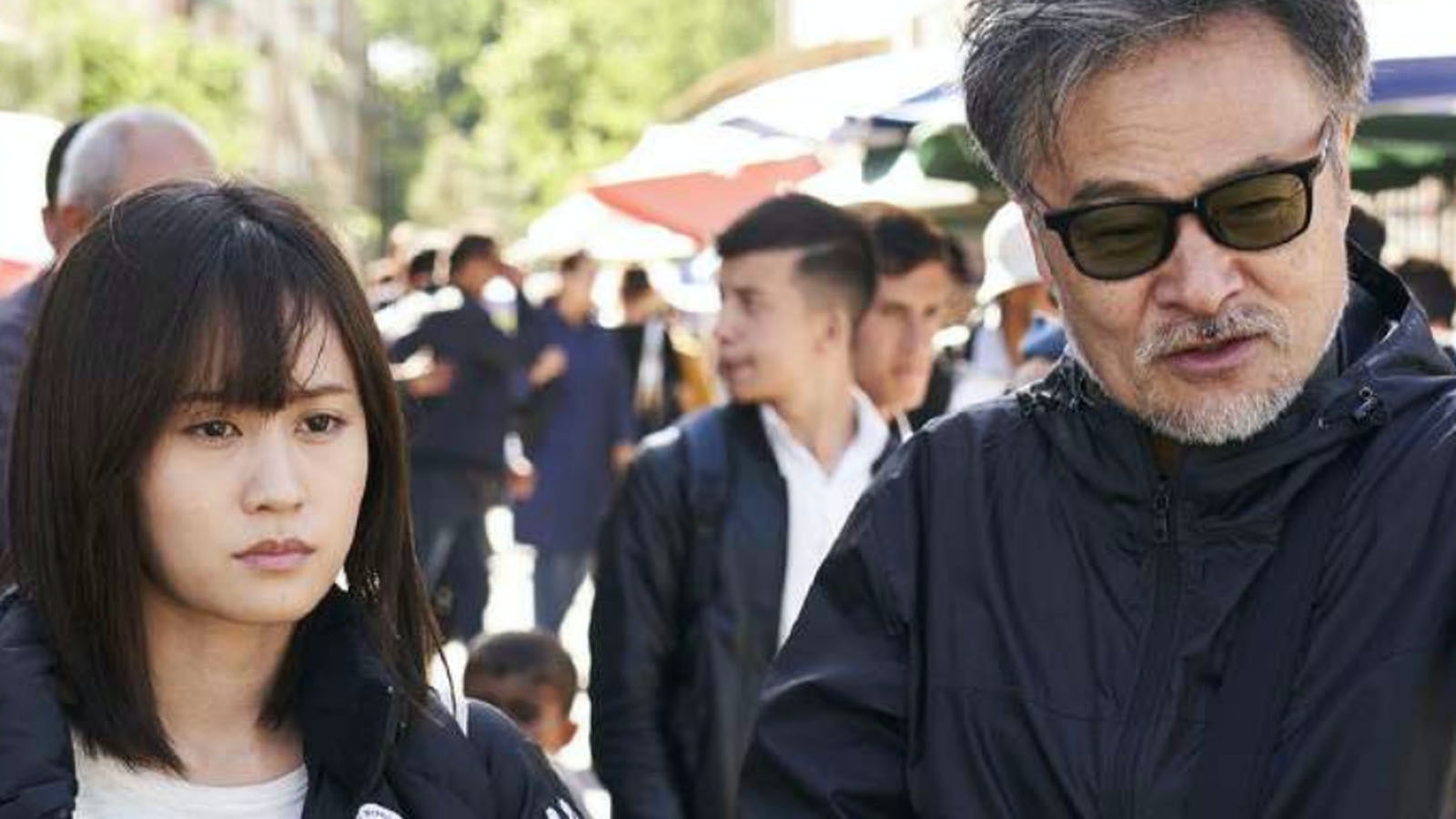 Maeda and Kurosawa on set

Midway through Kiyoshi Kurosawa’s To the Ends of the Earth, Yoko (Atsuko Maeda), the anchor for a Japanese TV travel program, is having an awkward conversation with the show’s cameraman. They are in the breakfast room of a hotel in Tashkent, one stop on a whirlwind tour of Uzbekistan, where Yoko goes on camera every day to report on the unique attractions of this Central Asian nation—which for Japanese viewers might as well be on the far side of the moon. Yoko’s job is to make travel seem like fun and not in any way as dangerous or alienating as it feels to her personally. To that end, she’s waded into a frigid man-made lake in search of a mythical sea monster, only to be admonished by the local fishermen that the creature will not appear if there is a woman around; she’s eaten mouthfuls of undercooked rice in a ramshackle luncheonette and pronounced it “deliciously crispy”; she’s ridden a rickety amusement park whirligig strapped into a seat that rotates 360 degrees, three times faster than the similarly rotating arm. The director demanded three takes, over the objections of the proprietor, who said that the ride was off-limits to children, only to be told that Yoko, despite her demeanor and the fact that she probably weighs less than 100 pounds, is not a child and can make her own decisions. After Yoko vomits into a plastic bag proffered with a bottle of water by the cameraman, the team moves on.

So the breakfast conversation is awkward. Yoko quietly explains that she feels as if she’s gotten further away from what she really wants to do, which is to sing. “Reporting needs reflexes,” she says. “Singing needs emotion from the bottom of my heart.” She has an audition when she returns to Tokyo. When she says that she plans to sing “Hymne à l’amour,” the cameraman asks her to sing a bit of it. She refuses, saying she’s not yet ready. The Edith Piaf/Marguerite Monnot song demands enormous vocal and emotional resources. But we already know that Yoko possesses a full measure of both. We’ve watched her perform (or project herself performing) “Hymne à l’amour” with a full orchestra supporting her on the stage of Tashkent’s great Navoi Opera Theater. 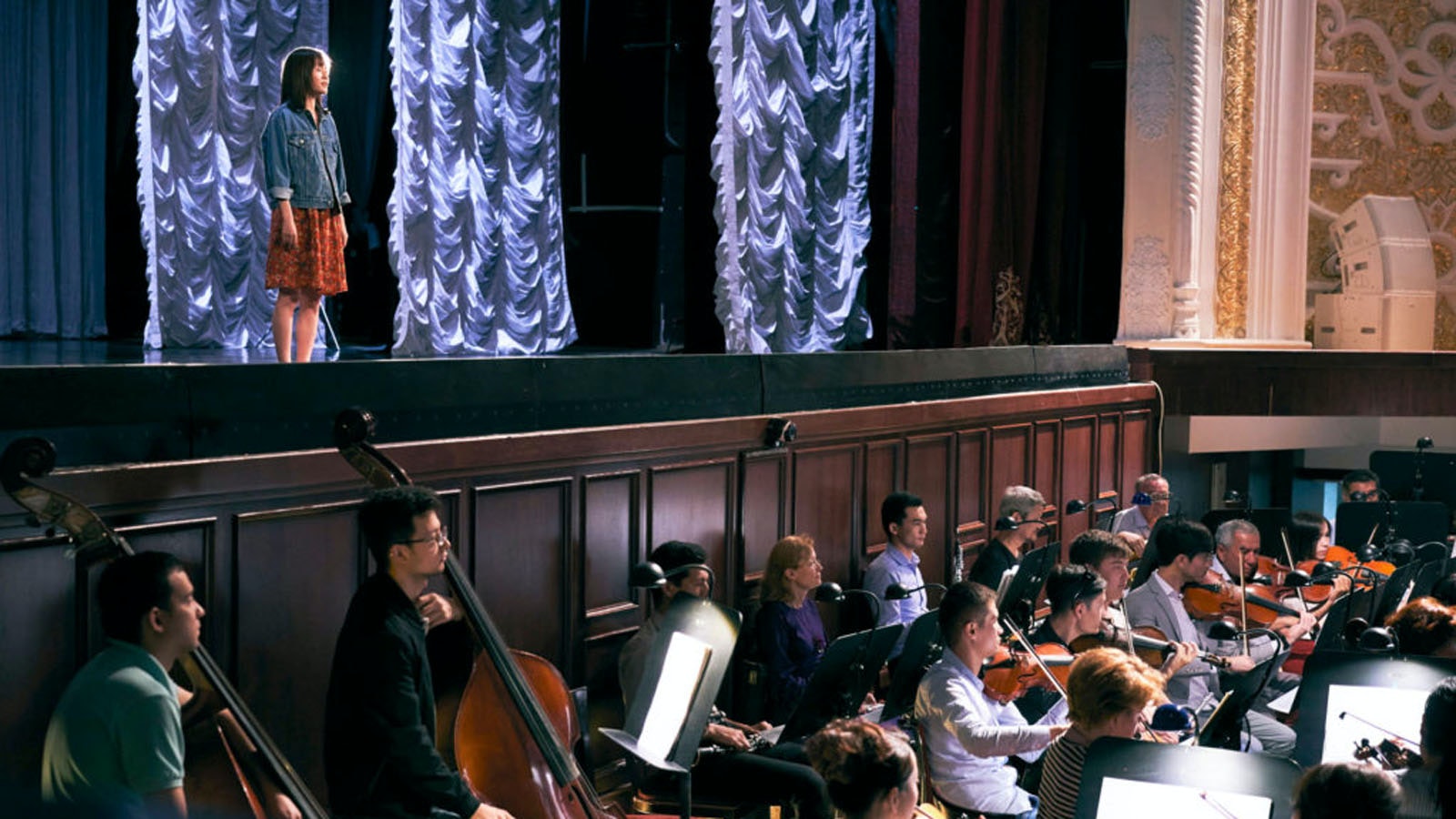 Still, the most surreal scenes are real in the sense of Reality TV. The film within the film is the travelogue in which Yoko is permanently perky and eager to please as she chats up the camera (i.e., the at-home audience) and the locations are chosen because everyone except Yoko thinks they make for good TV. But she has a lot of free time to explore her surroundings, and her curiosity overcomes her anxiety. I can’t think of another movie as attuned to the experience of being a woman alone in a strange country where you don’t understand the language, or how to buy a bus ticket, or how you’ll know when it’s your stop, or how after you’ve ventured into a food market where everything looks scrumptious but you can’t communicate with the sellers, you end up going into the one grocery store that’s almost empty and buying stale packaged crackers and water, and because you don’t know how to say “how much,” you show the guy behind the counter a bunch of paper money and hope that he doesn’t rip you off. Kurosawa gets all of those small details right and also the deeper sense of being lost, not just in a particular place, but as an existential condition, which turns these incidents into the stuff that haunts your dreams.

Kurosawa has said that he long wanted to make a film in one of the countries on the Silk Road. To the Ends of the Earth is an Uzbekistan/Japan commission. The rugged vast landscape is unlike anything Kurosawa and his terrific DP Akiko Ashizawa have ever shot before. Similarly “foreign” are the people in the streets, who crowd the frame and seem to be fascinated by Yoko, but just as likely have been attracted by the camera that follows her everywhere. Kurosawa’s movie is a richer travelogue than anything the TV crew could conceive. If everything about Uzbekistan is oversize in comparison with Japan, Kurosawa chose an actor to play his protagonist who has the physical flexibility and stamina of a gymnast, but could easily be mistaken for a 14-year-old. The difference in scale generates a visual drama of its own. Maeda was a J-pop star who turned to acting a little over a decade ago. One of her earliest important roles was in Kurosawa’s Seventh Code (2013), which I believe was the director’s first film to focus entirely on a female character. There are many strong women in Kurosawa’s films, but they are almost always part of an ensemble, as Maeda is in Before We Vanish (2017). But in To the Ends of the Earth, Maeda carries the entire film. Kurosawa employs the intensity with which she moves through space, and the emotional availability and transparency that allows him to shoot close-ups of her face in moments of discovery: when, for example, she realizes the policeman from whom she fled in terror actually wanted to help her, she slowly begins to weep, not only out of relief but because she is ashamed of having distrusted him. 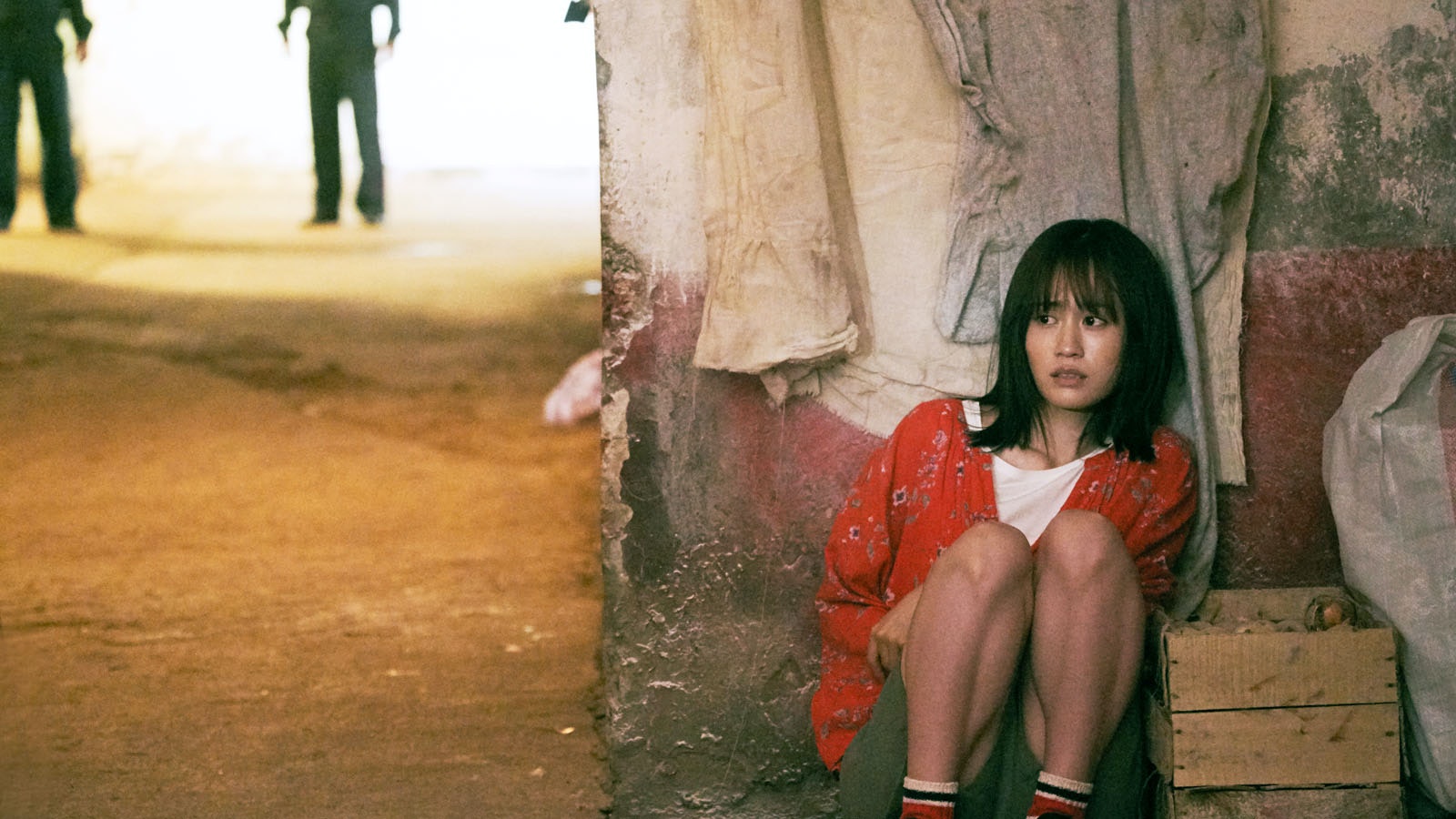 In one of the film’s amazing set pieces, Yoko enters the Navoi, drawn by the sound of a woman singing. Built by Japanese prisoners immediately after World War II, the building is minimalist in structure and ornate in detail. Yoko walks through the empty, perfectly proportioned rooms to arrive in an auditorium where a woman is alone on stage singing the familiar aria “Si, mi chiamano Mimi” from Puccini’s La Bohème. As she listens, Yoko slowly makes her way down the side aisle and onto the stage, where she is now alone, and, tentatively, she begins to sing “Hymne a l’amour,” her voice growing stronger as a full orchestra materializes in the pit. When the song ends, an abrupt cut returns us to the rows of seats, all empty except for Yoko, who is startled awake by a guard who wants to know what’s she doing there. It is one of the simplest and most surprising blurs of waking and dreaming life in Kurosawa’s work.

Yoko’s excursions often take her into the kind of labyrinthine spaces that Kurosawa loves. In the film’s emotionally twisty, climatic sequence, the TV crew is shooting in Tashkent’s huge indoor market. Yoko is given her own video camera, and like the red shoes in the Powell and Pressburger film of that name, the camera propels her through the winding aisles of the market and into the alleys and stairways behind it, where she is confronted by guards who point out the “No entry” signs. She flees from them only to find herself trapped in the passageways of the basement beneath the market, where the cops pursue her as she alternately tries to hide and outrun them.

During the early days of the pandemic, I pulled out my collection of Kurosawa DVDs and found in Pulse (2001) the perfect mirror for the terrifying isolation I felt while sitting in front of my computer screen. A devastating horror film, Pulse suggests that loneliness is not only a condition of the way we live now, but that it follows us to the grave and beyond. To the Ends of the Earth is an antidote to Pulse. Like Kurosawa’s Tokyo Sonata (2008), it ends in a moment of transcendence, achieved through music. In Tokyo Sonata, a young boy plays Debussy’s “Clair de lune” as sun streams through the windows of a classroom and two audiences—one on screen and the other watching the film—sit transfixed, knowing they are in the presence of the miraculous. In To the Ends of the Earth, Yoko, fulfilling her last TV obligation in Uzbekistan, climbs a mountain, and as the crew watches from below, she again sings the Piaf/Monnot ode to the power of love. In Godard’s 2 or 3 Things I Know About Her (1967), the female protagonist tries to recapture a moment of profound connection. “I was the world and the world was me” is how she describes it. Godard attempts to depict this transcendent experience but fails, perhaps deliberately. Kurosawa doesn’t fail. As Yoko sings, a tiny figure in a vast mountain space, he simply lets the wide shot continue for the entire length of the song, punctuated by three or four extreme close-ups of Yoko’s radiant face. (Kurosawa explained in an interview with Slant that although the air on top of the mountain was very thin, Maeda performed the entire song live and he demanded 20 takes.) The actor and the landscape—the elements that brought this uncategorizable film into being—are inseparable for one extended moment, and because this is cinema, to the end of time. • 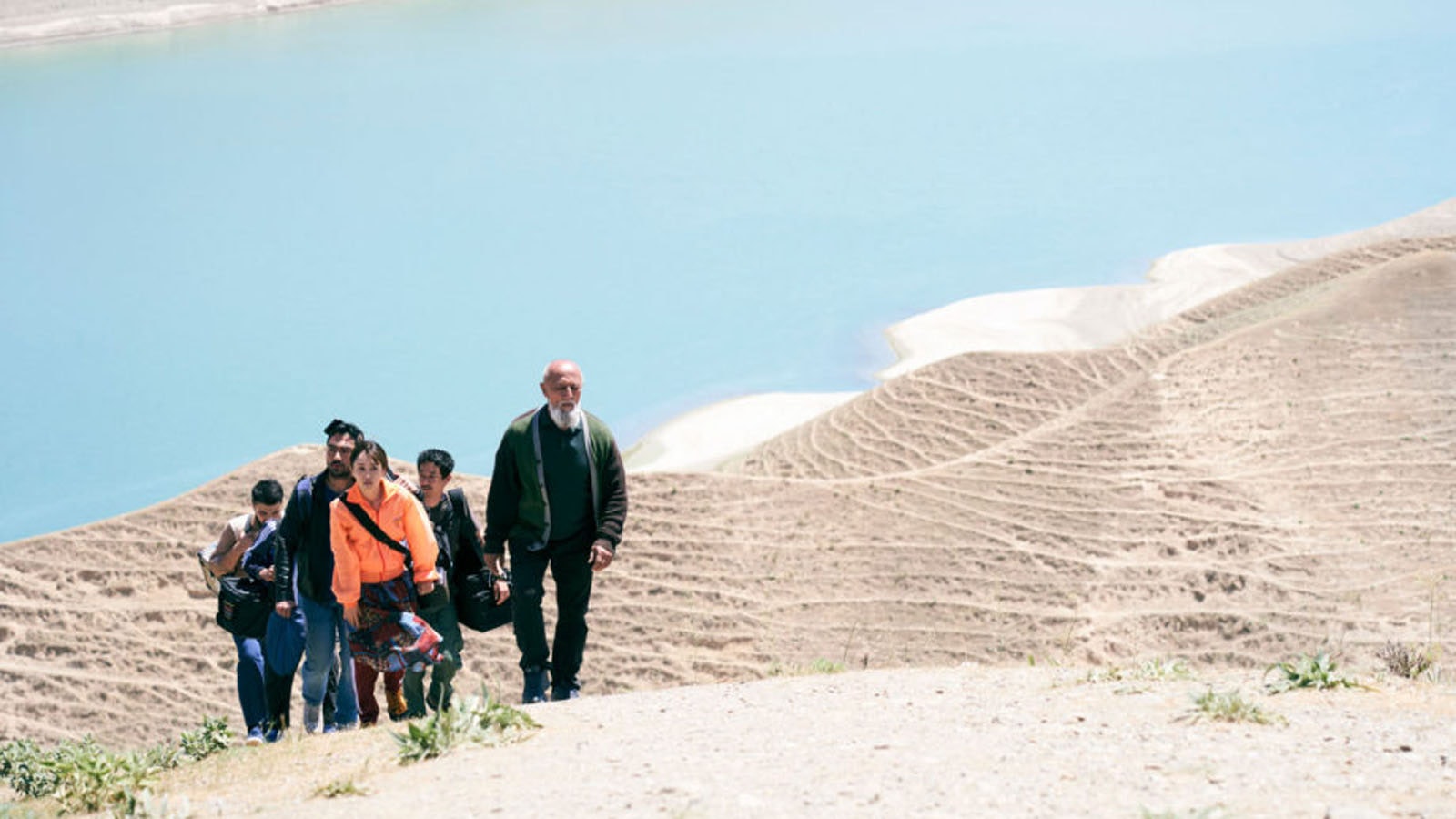