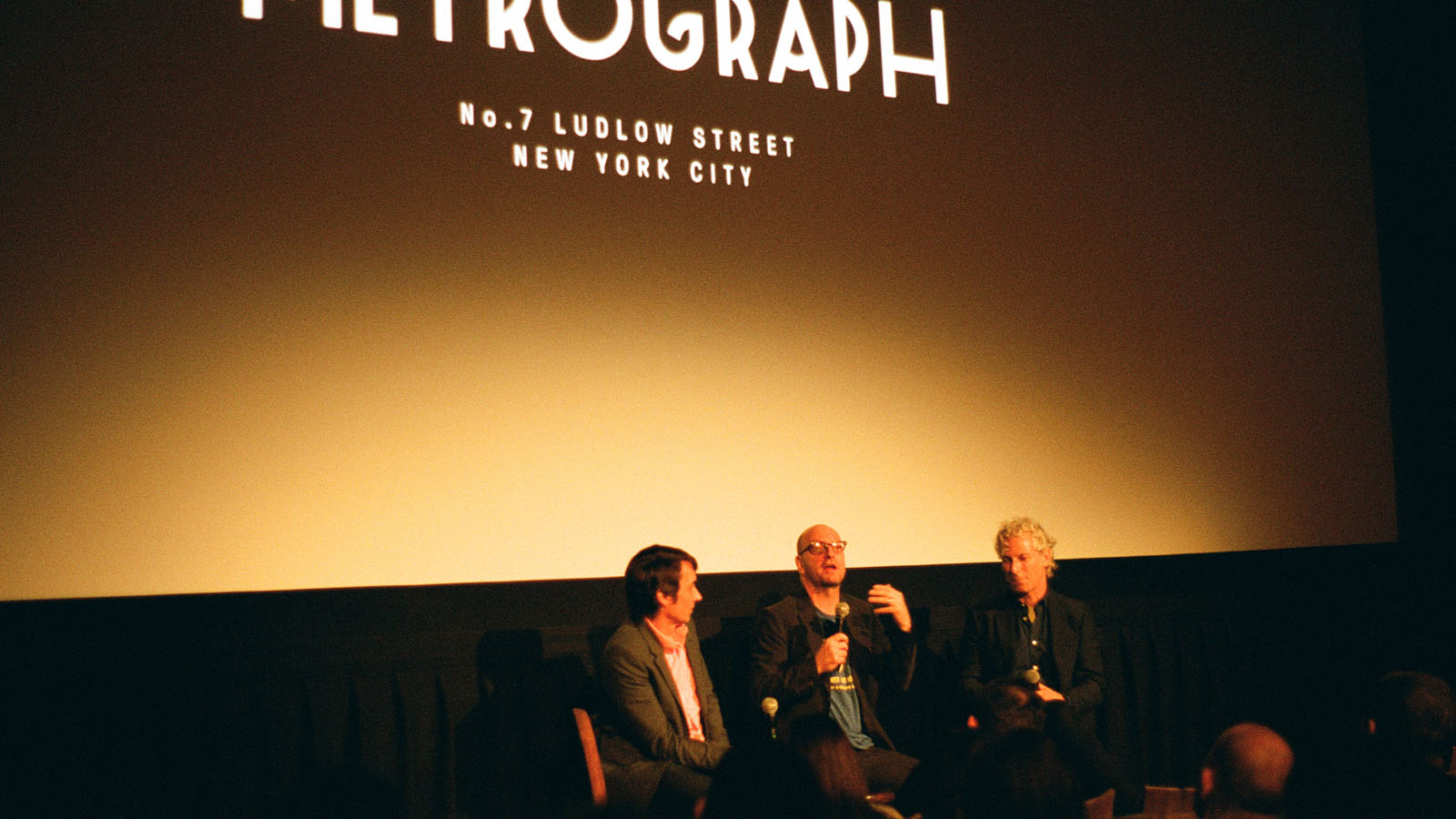 During an in-theater chat from 2017 with Soderbergh, directors
David Siegel and Scott McGehee discuss what it took to make
their debut feature, a neo-noir brain-twister, filmed in sordid
black-and-white widescreen. 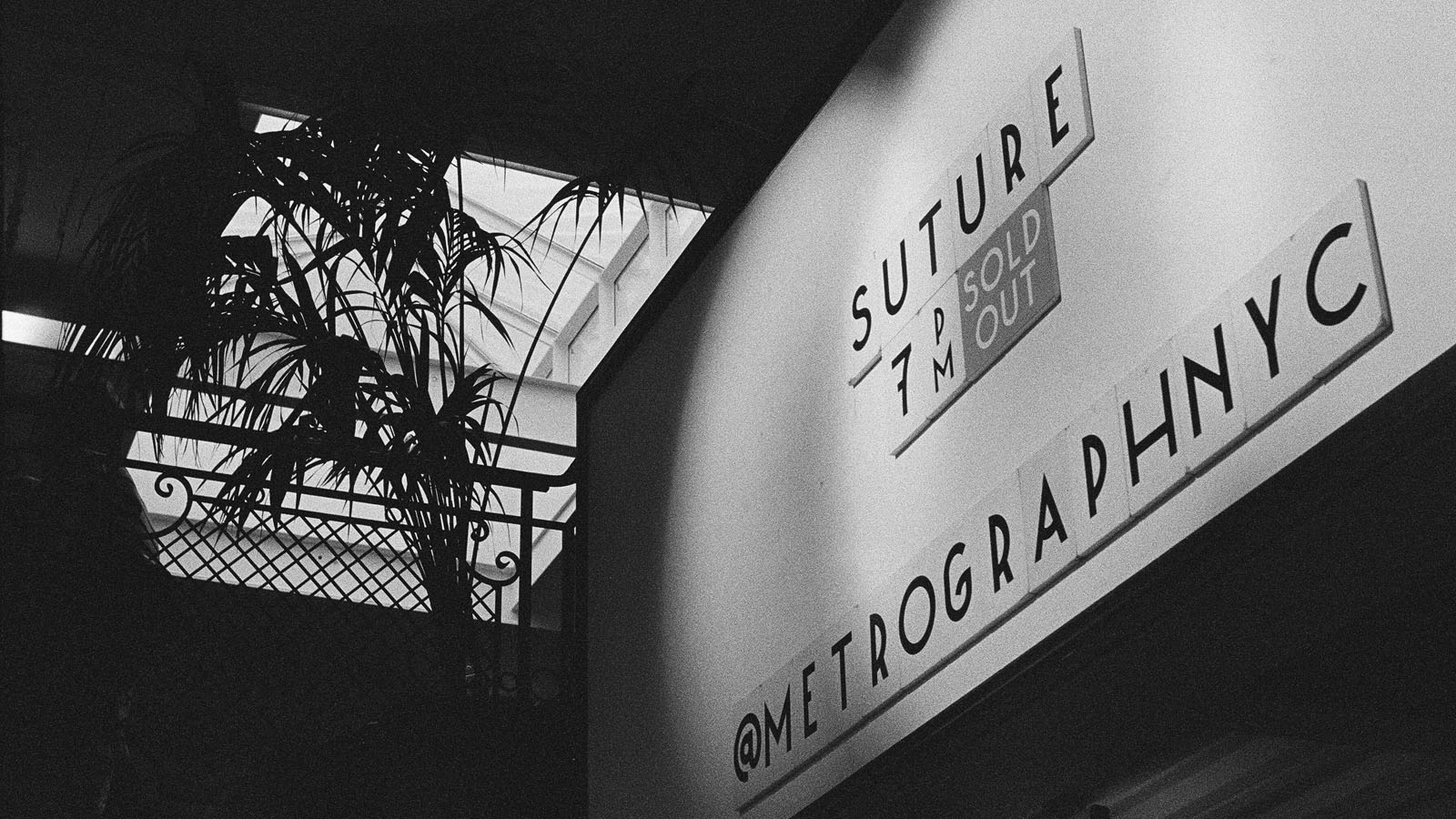 One question that runs through my mind when I see this film—it’s a bit of a gotcha question: do you care about the audience at all? [Audience laughs]

I mean, look, this is the first thing you’ve done. I came to it through a mutual friend who said, “Some friends of mine made this movie that I think is really interesting, you should see it. They’re looking for funds to finish it.” And I saw it and I loved it obviously and got involved. You wanted to stake your place in the movie business, and even in the early ’90s when things were a lot different than they are now, what did you think might happen?

Scott McGehee: Like, what the hell? [Laughs] We definitely cared about an audience, but it was an audience of people who we imagined, not like the broader audience that we’ve come to realize is essential to having a successful film.

Can you talk about how you met—because your collaboration preceded this film—and the things that you worked on prior to making Suture?

SM: David and I met because my sister, Kelly, who is the production designer of this movie, and David went to art school together. They became friends and then David and I became kind of family friends first and we decided to try and make films together. I was in graduate school studying Japanese film history in the rhetoric department at Berkeley and David was doing a fine-arts degree, and we both thought that there were better prospects in the film business. [Laughs] Boy, were we wrong. But that started out our collaboration. It was a family thing— me, Kelly, and David were gonna make things together, and we made a couple of short films. In graduate school, I was studying a lot of postwar Japanese films, like [Hiroshi] Teshigahara’s films, that David and I watched together when we first started working together. We used to go to the Pacific Film Archive in Berkeley and put films up on the flatbed and just watch them together, and we kind of formed an aesthetic by watching cinema that we both liked, and that was part of the process that led to this film.

“when I see things that I made early on, I often think, ‘Oh, that’s only the kind of film that a stupid young man could make,’ in the sense that you don’t know what you don’t know.”—STeveN SODERBERGH

Does this line up with your memory?

DS: I think that’s what I remember…

DS: And to some degree, widescreen black and white [was an influence]. Scott likes to tell the story of the fact that after the war, in Japan they just flipped all cinemas to projecting all Cinemascope films or all widescreen, anamorphic films, so all movies were made in that format, which was not the case in the United States. In the United States, the widescreen format was principally used for epics and sword-and-sandal films, and things that seemed like they had a different kind of perspective or scope, but in Japan they were using it for personal dramas, and crime movies, and things that you wouldn’t necessarily expect here. And we started seeing the use of that kind of space and graphically what was happening that way, and that was very exciting to us. And to some degree that’s what inspired some of the formal aspects of the film.

And from a storytelling standpoint, I know the film Mirage [Edward Dmytryk, 1965] was a sort of talking point for you guys. Talk to me about how the writing of the script developed. You’d made some shorts together, but was this the first feature-length thing that you guys tried to write?

SM: We tried one other feature film that never really worked. But then this came out of a conversation we were having about identity, and we looked at film tropes we liked that kind of got to that core idea, and it was amnesia, psychotherapy, twins—different things that kind of poked at a kind of abstract idea of identity, and we tried to cook up a plot that used as many of those tropes as we could. And this is what came out of that.

DS: When we had the idea of the conceit of a Black guy and a white guy who don’t really look anything alike but within the story they are addressed as if they do, that was kind of the trigger that kept things going.

How long did it take for you guys to get a draft?

SM: I actually don’t know. I feel like a few months. 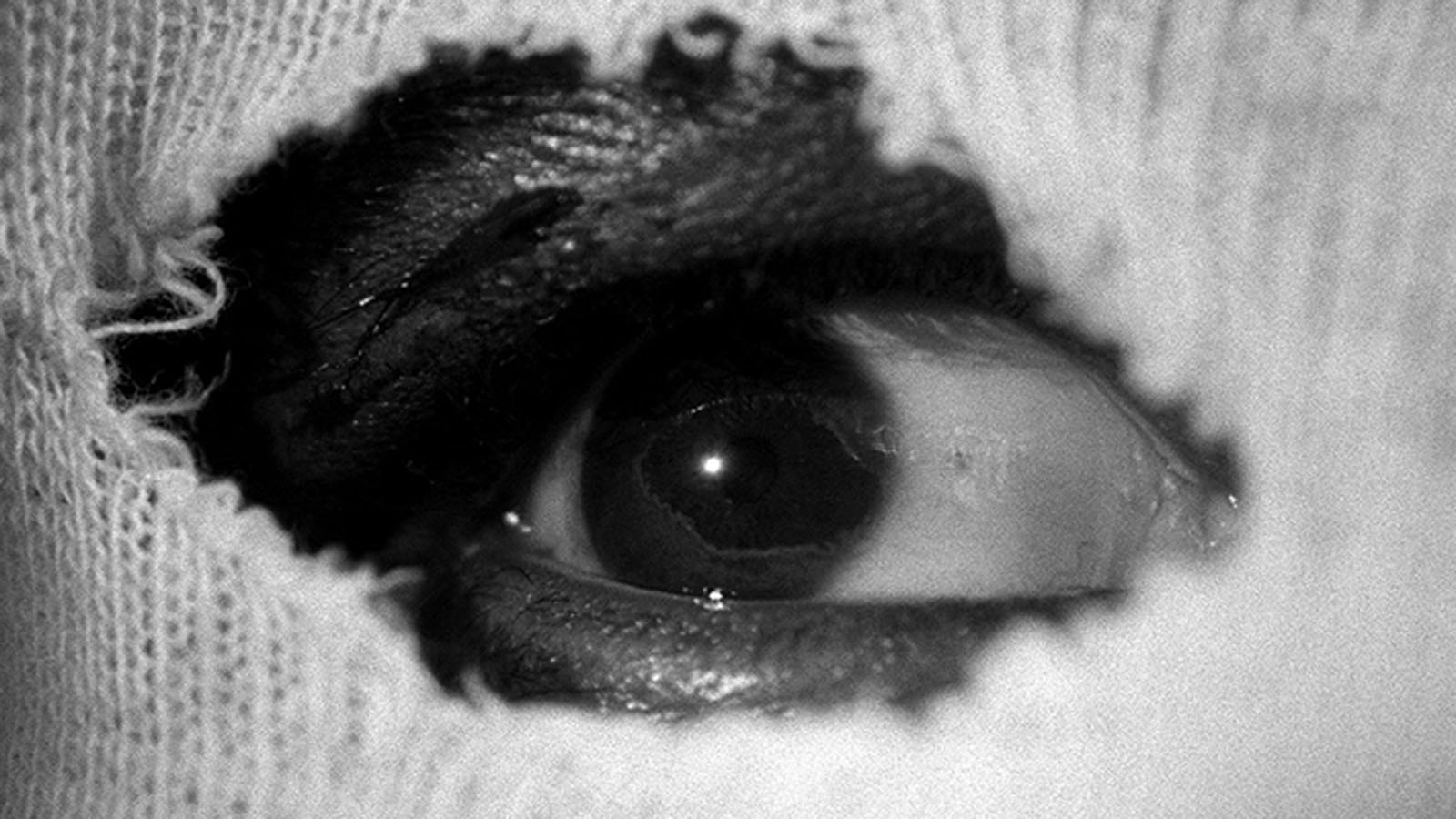 And so you know nothing, how do you then go about trying to raise money for this totally commercial script? [Audience laughs]

SM: We just started talking to people, like rich people that we knew [Laughs] and…

SM: We sent out a bunch of letters to industry people, and that got us nowhere. Gus Van Sant wrote us back. We still have that letter that he wrote.

SM: Yeah, typed on a portable typewriter. But pretty much that was it, we had a bunch of meetings. We had one with a guy at New Line, who was like a frat brother of a friend of David’s or something. And I remember him saying to us: “‘Suture,’ is that a common word?” And David very gracefully said, “Well, I don’t want to make is sound like you don’t know a common word, but yeah it is.” [Audience laughs] We didn’t make it there… We had somebody who wanted us to make it in color and without the Black guy and the white guy, like there was somebody who thought that would go. We didn’t want to do that, but we ended up putting together enough money through investors—not very smart investors—who would let us go into production without enough money to finish.

This is another way in which the business has changed. I don’t think you could do that now. You couldn’t get anybody from SAG to be in a movie in which you don’t have enough money to prove to them that you could finish the film. So these were the halcyon days of independent filmmaking. This was 20-plus years ago, so we can open up the kimono a little bit: so you went into production with how much money?

So you were basically out of money at the point that I saw it?

SM: We sort of knew we had enough to get through a rough cut, and we were cutting on film, so we had this really taped-together, written-on rough cut that we were then projecting to people to try and get some enthusiasm so that we could raise the rest of the money to finish it.

So I came to this through Alison Brantley, who’s credited as a produce. She was working at Miramax during the sex, lies, and videotape period and she was the one who called me and said I should check it out. And when I saw it, I called Michele Halberstadt, who runs an independent distribution company in France, and they bought the movie for enough money to finish it.

SM: But that was after months of screening and screening and screening in Los Angeles, and Steven would show up at every screening wearing a Suture T-shirt, but no one was biting. So Michele was like months later. You were at Cannes and had that conversation that actually ended up finishing the film. But we were getting pretty desperate…

Can’t imagine why… We did this session not long ago, the movie is out on Blu-ray now, it’s been remastered beautifully and David and Scott and I did a commentary for it. That was the first time I’d seen it in a long time. I don’t know how recently you guys had really sat down and watched the film… I know when I see things that I made early on, when I have to, when they get remastered, I often think, “Oh, that’s only the kind of film that a stupid young man could make, in the sense that you don’t know what you don’t know, and you just think, wow… and part of me now would maybe be a little hesitant. Knowing its history and that it was your first film and that you’ve continued to work, what’s it like to look at now?

DS: I mean, that is sort of the beauty of it though—we would never make the choices that we made then because they would be mediated by our own sense of business and what expectations are. When we watched the movie when we were remastering it—and we hadn’t seen it in a long time—we thought, “That was very freeing,” in the way we made choices, and what we did. It could never really be like that again, or at least you can never really get fully to that place. So there’s a lot of pleasure in that, and it’s both a sweet and sour kind of experience, because it’s beautiful to again feel that sort of liberation, and to some degree there’s melancholy in that it can never really be again… • 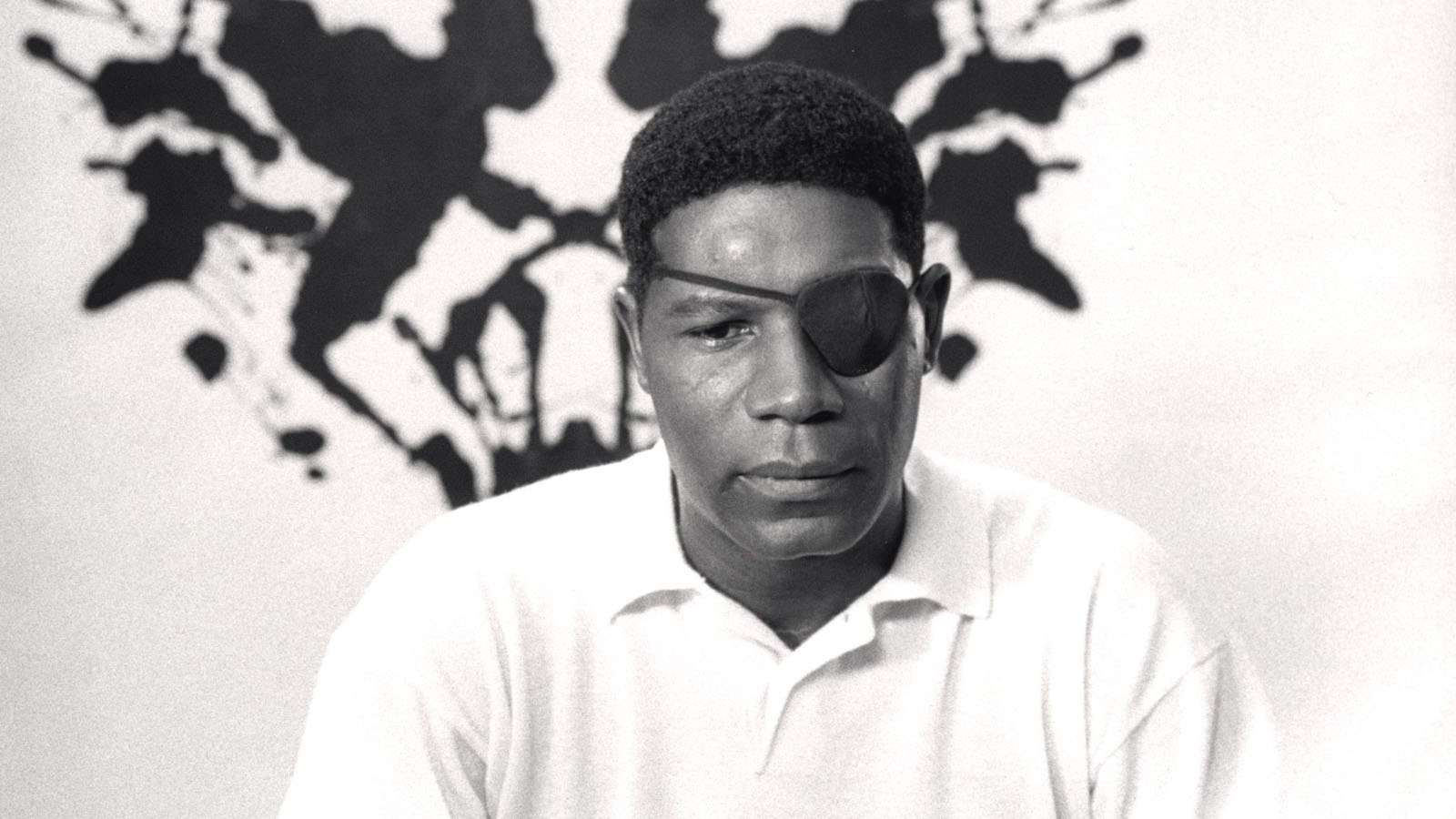