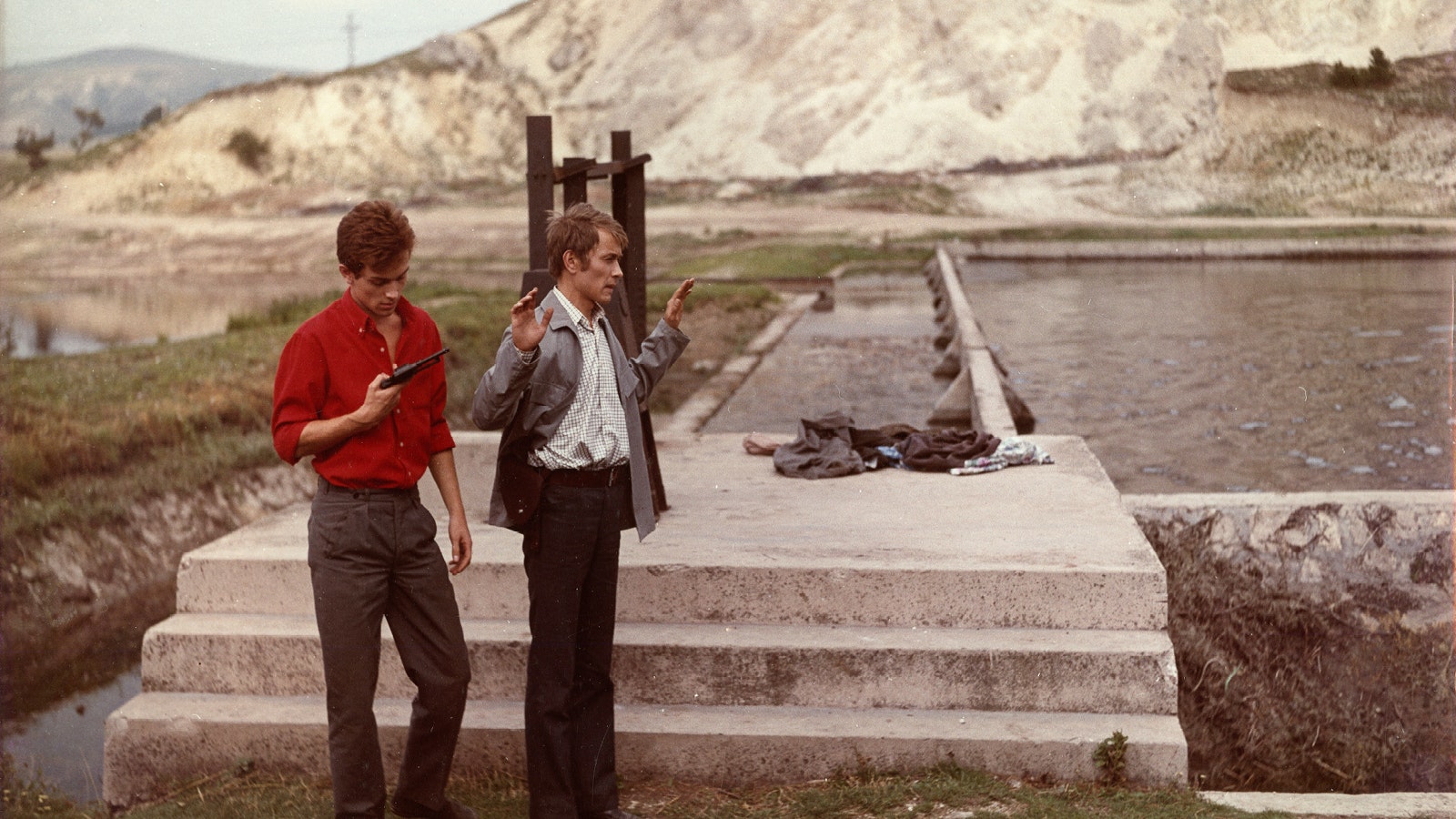 On the Hungarian master’s music-filled, most controversial film. 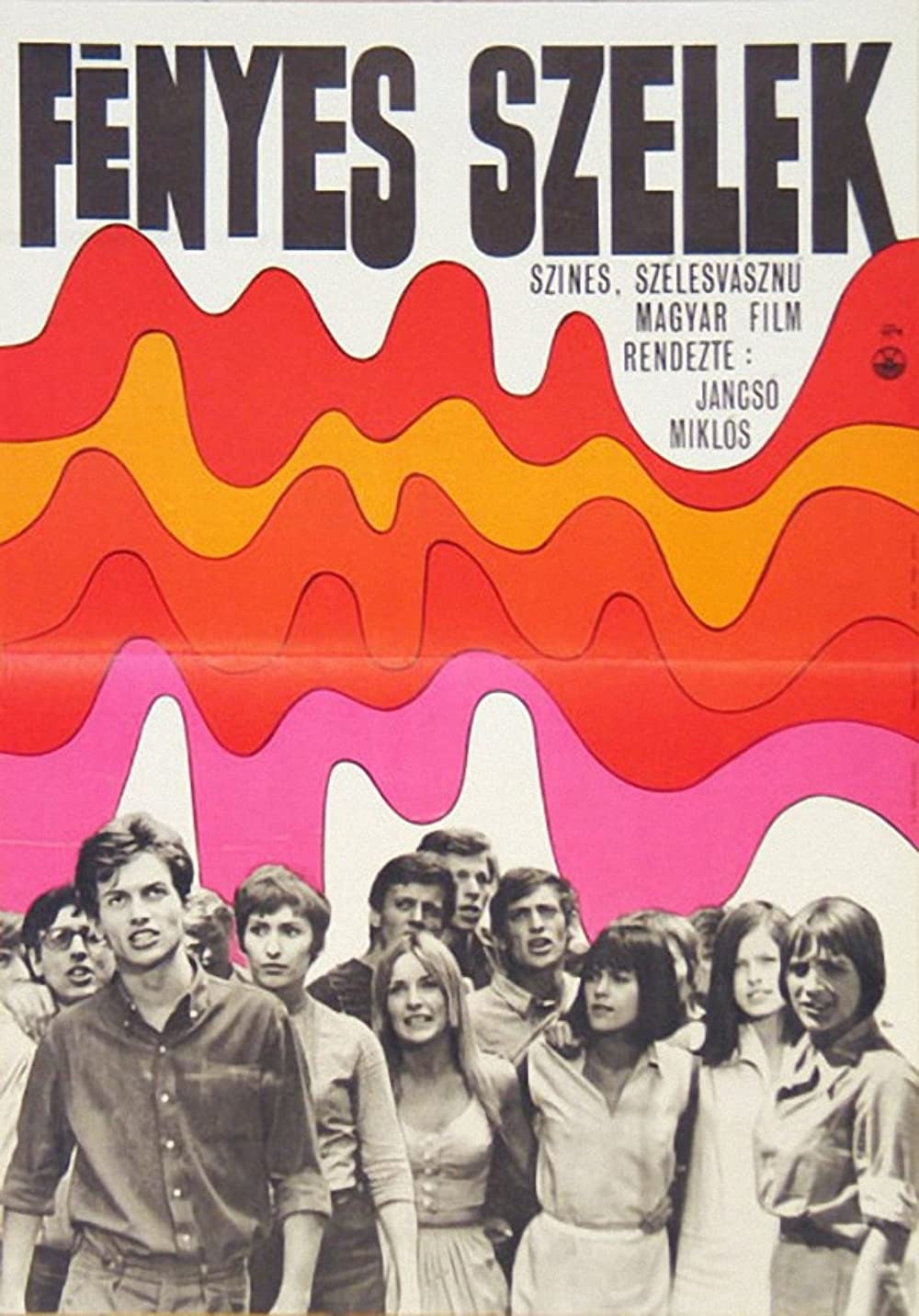 Miklos Jancsó’s bleak, antipsychological studies of groups under pressure are distinguished by one of the boldest styles to emerge anywhere in Europe over the first quarter century since the end of WWII—a personal idiom based on long, intricately choreographed tracking shots, copious nudity, and narratives that pivot on cryptic betrayals. His strongest films dramatizing the seizure of power and the exercise of terror at cusp moments of his nation’s tumultuous history, Jancsó has no equal in the metaphoric representation of the encircled Hungarian condition.

Born in 1921, the son of a Romanian mother and a Hungarian father, Jancsó was raised in Vác (20 miles north of Budapest along the Danube). He received a Catholic education and converted to Communism during WWII, joining the party in 1945. Something of a perpetual student, having variously applied himself to law, art history, and ethnography (including a period of fieldwork in Transylvania) before entering the Academy of Dramatic Art, Jancsó was also active in the People’s College (NeKOSZ) movement that, two decades later, became the subject of his most controversial film, The Confrontation.

Jancsó’s first color film—as well as a musical, complete with period anthems—The Confrontation was set in mid-1947 but produced in the aftermath of the French May and Prague Spring. (Invited to Cannes, Jancsó was unable to screen his 1967 Silence and Cry when militants closed the festival; The Confrontation shoot was interrupted when Hungarian tanks rolled by en route to Czechoslovakia.) Thus, Jancsó ambiguously portrays his own generation at the zenith of its youthful idealism wearing the blue jeans and miniskirts of the 1960s.

The mood is ambiguously festive. It is only a few months since the Communists engineered the demise of Hungary’s most popular political party, the Smallholders, and shortly before the national elections in which the Communist Party would emerge, with 22% of the vote, as the largest partner in a new ruling coalition. Mock utopian, The Confrontation stages politics as a source of pleasure—or at least as a game. Opening with a close-up of one girl, Jancsó pulls back his camera to show a group of students playfully blocking an army jeep. Mediating between two groups, a young police officer, Kozma, orders the soldiers to remove the demonstrators. Instead, the high-spirited students unexpectedly push the soldiers into the river-then strip off their own clothes and jump in.

Jancsó ambiguously portrays his own generation at the zenith of its youthful idealism wearing the blue jeans and miniskirts of the 1960s.

The screenwriter Gyula Hernádi was also a member of NeKOSZ, and the film’s Hungarian title, Fényes Szelek (Bright winds) is taken from one NeKOSZ anthem: “Our banner is blown by bright winds and what it says is Freedom. Tomorrow we will transform the entire world.” (While the film adaptation of Milan Kundera’s The Joke—in production around the same time as The Confrontation—makes ironic use of a May Day 1949 newsreel showing official costumed folk dancing in the streets of Prague, Jancsó is more ambiguous in his nostalgia for the Stalinist folk culture.) The wind is heard when, singing and dancing, the exuberant students invade a nearby Catholic seminary, scaling the fence to drape their red banner over the stone cross, in an attempt at friendly reeducation: “We’ve come to debate with you.”

The student leader, Laci—resplendent in an unambiguously red shirt—is an advocate of persuasion who considers Communism the “first decent power in history.” There are two simultaneous debates. One, within the group, concerns revolutionary tactics and reflects a division between the urbanist Communist Laci and a group of radical populists; the other is the ideological discussion with the seminarians. The students initially dominate the seminarians, encircling the bewildered Catholics—as if to emphasize their own freedom and unity. In particular, Laci seeks to engage a Jewish student—an intellectual—who escaped Fascist persecution by taking refuge in the seminar. What, Laci asks, is the role of the individual in history? The Jewish boy rejects the Communists (although it is evident that he is attracted to their community) because of their use of force.

A masterful tour de force, The Confrontation consists of only 31 shots. Jancsó’s ever-moving camera integrates the singing, dancing radical students; the continual parting and regrouping of crowds; the small struggles within the cadre; and the sudden flare-ups of violence into a fantastic political ballet, where meaning is generated as much by action as speech. The narrative unfolds without apparent heroes or villains—initially abstract characters developing through their behavioral responses to the changing situation.

Throughout, the students circle-dance around their adversaries. “This business of ‘holding hands,”‘ the political philosopher Ferenc Fehér wrote in Filmkultúra, is “visible presentation ... that the most decisive organization power is still very definitely that of the people.” Perhaps: in The Book of Laughter and Forgetting, Milan Kundera describes a news photo showing a row of armed police in riot gear, glaring at a group of youthful demonstrators “wearing T-shirts and jeans and holding hands and dancing in a circle.” Kundera, eight years younger than Jancsó, also came of age in the brave new world of East European Stalinism. “I think I understand them,” he writes of these youthful demonstrators whom he imagines dancing to “a simple folk melody.” “They feel that the circle they describe on the ground is a magic circle bonding them into a ring. Their hearts are overflowing with an intense feeling of innocence: they are not united by a march, like soldiers or fascist commandos; they are united by a dance, like children. And they can’t wait to spit their innocence in the cops’ faces.” 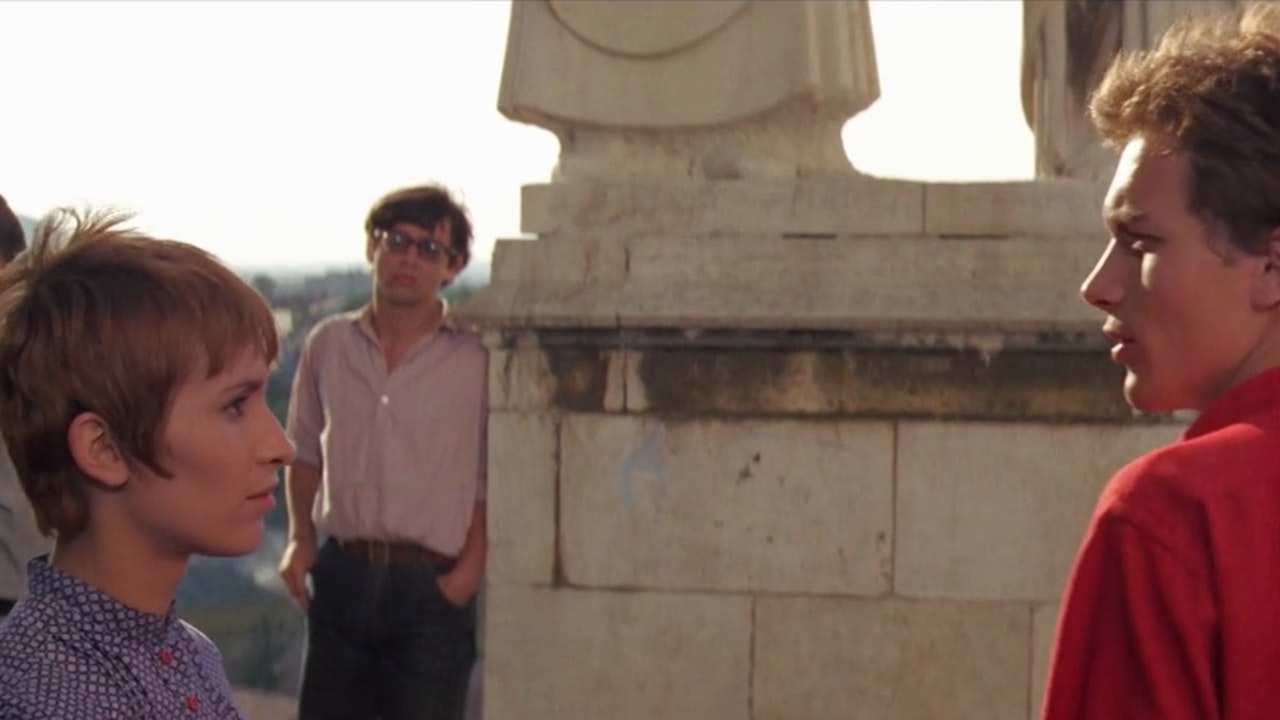 In The Confrontation, the Catholics remain sullen and unresponsive until the Communists bring in a folk band. (At this point, the near-continuous music and dancing proves contagious: “Even God forgives a merry sinner,” someone says.) But along with the band comes police support. When the pragmatic Kozma—scarcely more than a student himself, albeit the class-conscious son of a peasant family—takes this opportunity to arrest five suspected counterrevolutionaries, the irate Catholics surround and overturn his jeep.

It is irrelevant to the movie whether Kozma’s warrants are justified. Under idealistic Laci, the students refuse to cooperate with the police. Hence, the scrupulously rational Kozma criticizes Laci as overly romantic and insufficiently tough-minded. (Separated by his uniform from his former comrades, Kozma sometimes joins in their dances, other times manipulates them.) Whereas this straightforward policeman is the film’s most politically aware character, the neurotically self-doubting Laci is the most sympathetic. When, as a protest against Kozma’s tactics, he attempts to resign his leadership position, he is accused of a bourgeois deviation and dismissed.

Now, as suggested in the movie’s first image, the students turn to the ousted Laci’s adjunct, the rigidly sectarian Jutka—a peasant rather than an urbanist, sometimes referred to as the Girl in Trousers. Borne on her supporters’ shoulders, Jutka returns to the seminary and further harangues the pupils: “There can be no democracy for the enemies of democracy. He who is not with us, is against us.” Thus anticipating the Hungarian Communist Party’s subsequent line, as well as articulating its burgeoning attack on Catholic institutions, she demands that the priests renounce their allegiance to the church, even as her followers stage provocations and break windows.

Jutka is the film’s most idealistic and ideologically consistent figure, as well as the most authoritarian and intolerant. (She is, as Kundera wrote of Ludvik’s lost love, “naive,” “strict,” and “full of joy”—like the spirit of the time.) A heroine out of a Chinese revolutionary opera, Jutka is deliberately harsher than the cops. Her methods-burning “reactionary” books, threatening to shave the seminarians’ heads until they remember Auschwitz, making them march in dunce caps—suggest Fascism as well as the Chinese Red Guards, a taboo subject in 1969 Hungary.

Jancsó provocatively called The Confrontation “a warning to all revolutionary movements in the process of being born and to those which have not yet triumphed that the Revolution carries certain dangers within itself.” Jutka’s reign of terror lasts only until a group of slightly older Communists arrive and—belying the independence of the people’s colleges—assert their own control over both the situation and the student cadre. The party is both cynical and expedient: Jutka and her few faithful followers are summarily expelled from college, although as Jutka defiantly observes, she never cast anyone out.

When Laci objects, the party leaders relent. Jutka may remain. The film ends, as it began, with a close-up of Jutka—in this case, the back of her head—as Kozma observes that she might yet become a leader.

Released in February 1969, The Confrontation anticipated by a decade the anti-Stalinism of Hungarian films such as Angi Vera and The Stud Farm, arousing unprecedented popular debate (as well as conflicting appraisals in the official press). “On the one hand,” wrote sociologist Ivan Vitányi, The Confrontation articulated “the basic line of democratic socialism, on the other hand the extremist movement of Maoism and Cohn-Benditism.”

After the party daily Népszabadság called The Confrontation “a defense of church and reaction” (even while favorably citing its “political realism” as an alternative to the now-discredited Czech allegory), the debate over the picture reached an extraordinary pitch. Angry critics stalked out halfway through the screenings. Press and cultural weeklies discussed The Confrontation at length, disputing its historical accuracy, with former NeKOSZ students taking positions on both sides of the controversy.

Feher’s Filmkultúra piece ended with the prudently italicized Kádárist assertion that The Confrontation “certainly does not accept any alternative to socialism.” But there were others who suggested that the movie be banned, or at least—as the youth newspapers proposed—given some kind of X certificate, indicating a nonrecommendation for young people. Playing theatrically all through the spring of 1969, The Confrontation was the subject of two organized conferences—one for party officials and teachers, the other attended by an assortment of students, historians, pedagogues, critics, philosophers, and housewives.

This excerpt from J. Hoberman's 2000 book, The Red Atlantis: Communist Culture in the Absence of Communism, is reprinted with the permission of the author and Temple University Press. 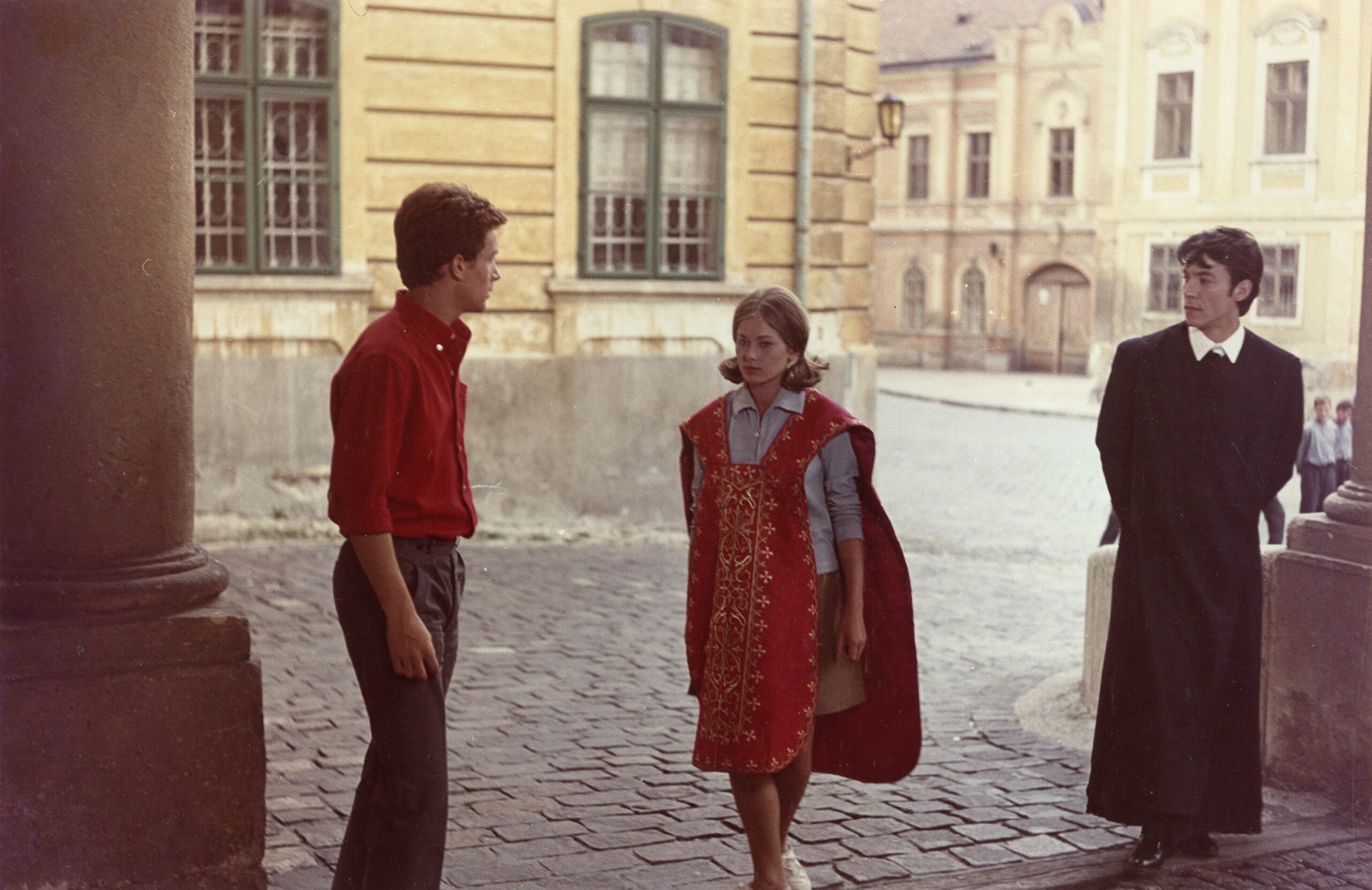 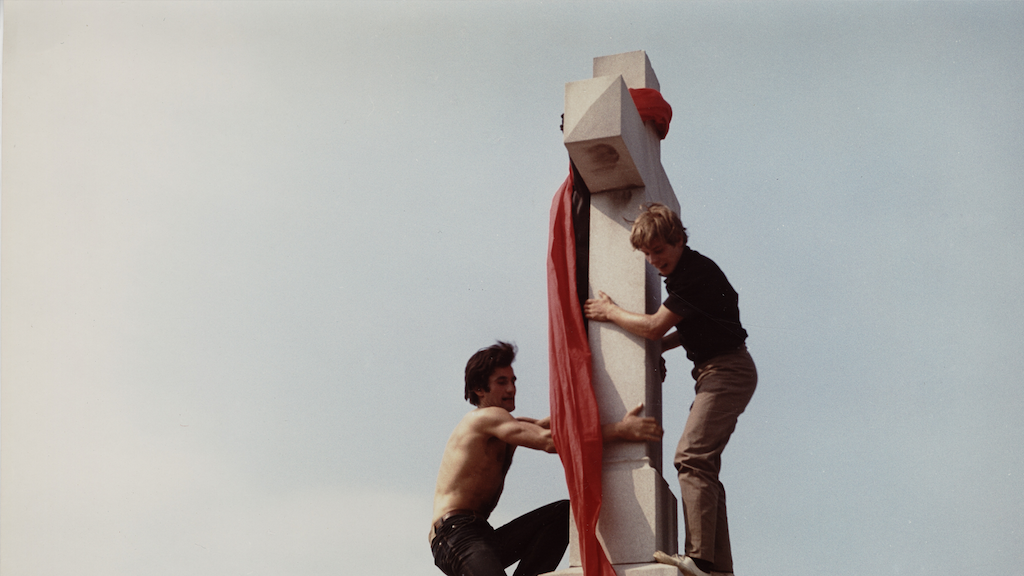 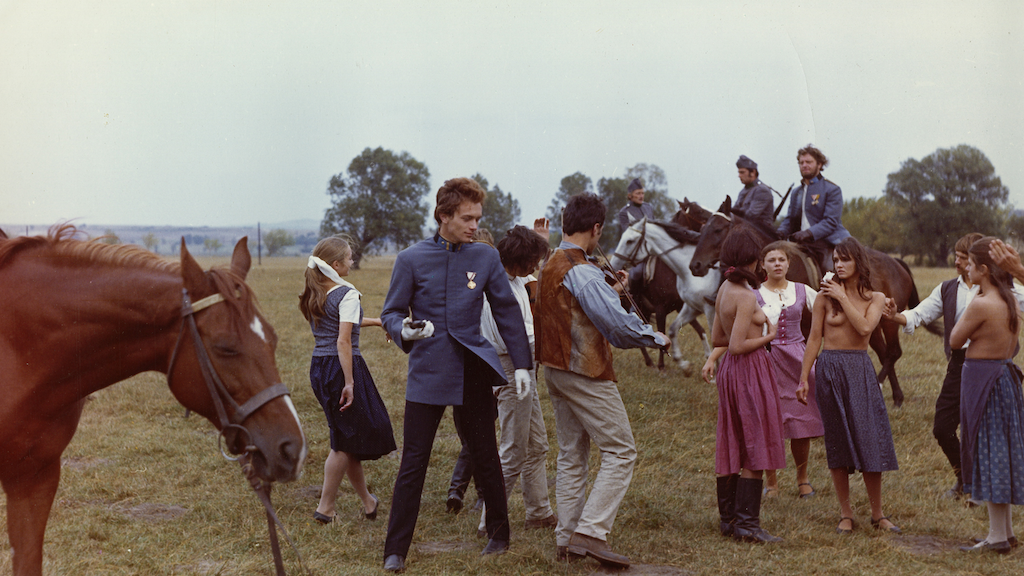 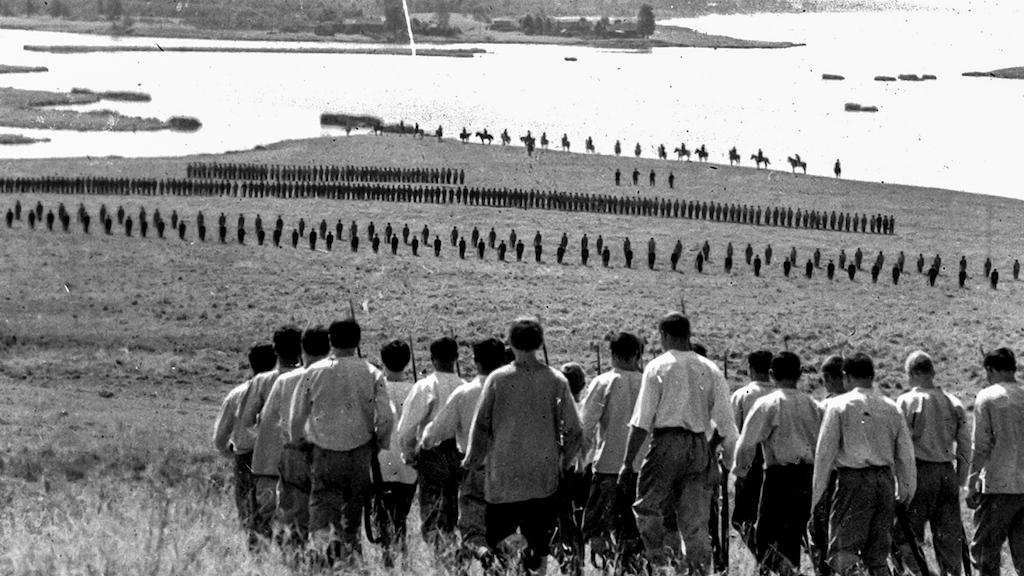