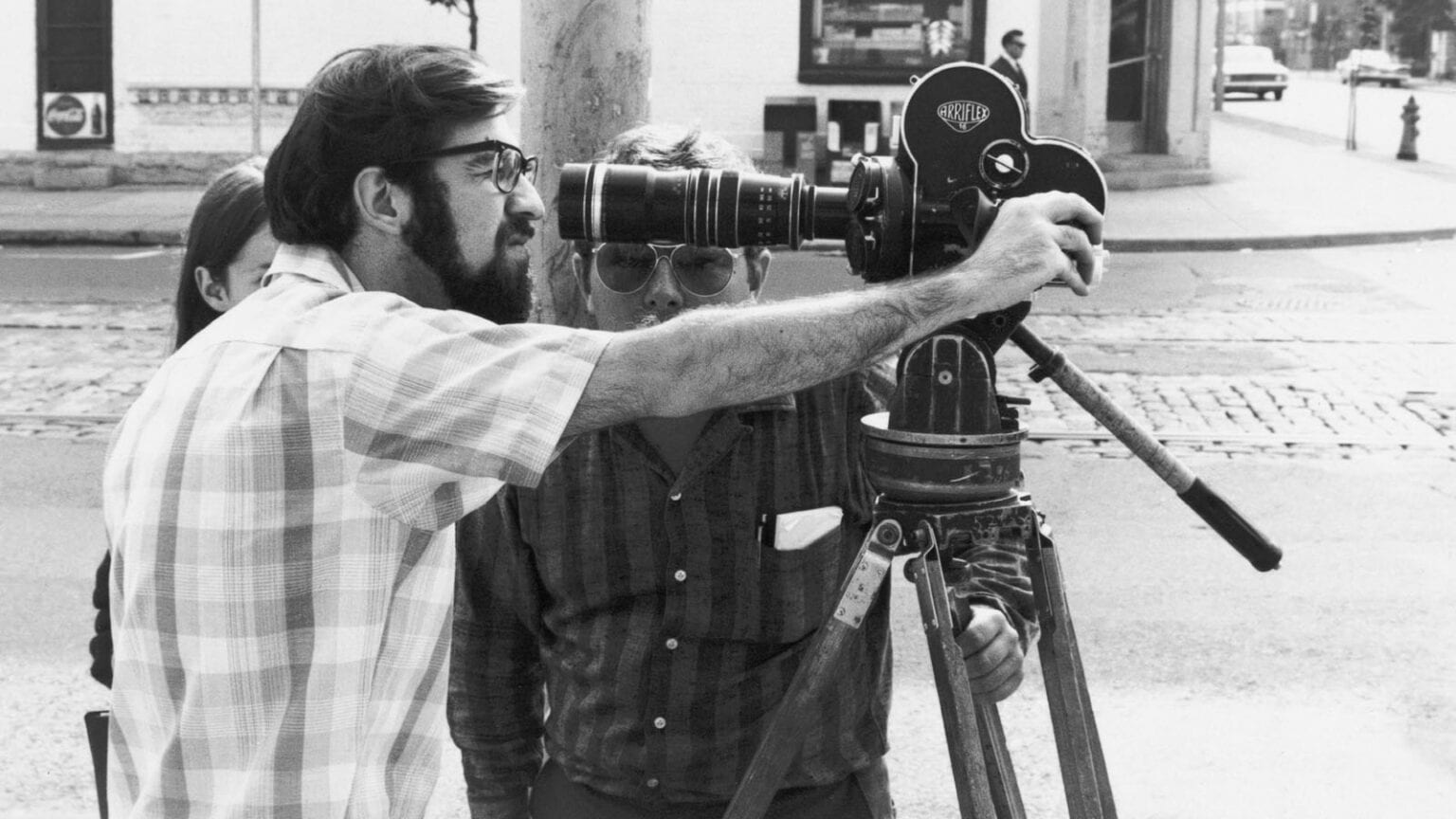 © National Film Board of Canada

How a director turned the reins of a documentary made at the height of the late-’60s counterculture movement over to a group of Toronto youth eager to tell their own story. 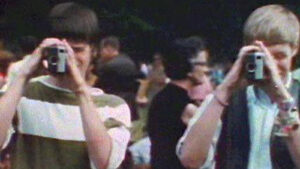 The unruly adolescents have chunky glasses, handsome sandals, bad skin, questionable facial hair, and an array of eccentric hats. They cruise the avenue in two station wagons, one olive, one burgundy, several of the teens literally spilling out of the windows and taunting passersby. They have encounters with police officers, city officials, and sundry elders, and in every case, they question, question, question. “We’re just a group of kids, but we’ve got some cameramen from the National Film Board with us,” one of the girls explains to a City Hall receptionist from a phone booth in Étienne Brûlé Park, where she and her entourage are hoping to capture images, pending city permits, for a documentary that is in the process of discovering what it’s about.

Nominally directed by 35-year-old Mort Ransen, Christopher’s Movie Matinee (1968) was a project undertaken by the National Film Board of Canada in the wake of protests calling upon the city of Toronto to ban all motor traffic from Yorkville, the midtown, campus-adjacent district that at the time was a hub for the burgeoning local counterculture. The protesters were met with violence from police and unsympathetic reportage in the media, which largely fell in line with the hyperbolic sentiments of former Mayor–turned–City Councillor Allan Lamport, who expressed concerns over what he deemed an epidemic of indolence and poor hygiene among Yorkville’s hippie contingent. “Sometimes you get a cancer area there, and we’re trying to ferret that out,” Lamport explains to Ransen’s camera.

Gathering roughly 30 students—most of whom, for the record, didn’t identify as hippies—Ransen and his skeleton crew opted to surrender an unspecified degree of the film’s authorship to its subjects. In turn, the filmmakers themselves became co-stars in the unfolding drama, appearing on camera and frequently engaging in debates about procedure, content, and purpose. Looking pretty hip in snug white trousers and dark shades, Ransen early on declares, “The kids are deciding what the film is going to be.” But what is perhaps most interesting about this experiment in collective creation is the fact that, even after more than half a century, its essential underlying message remains ambiguous or, if anything, plural: Christopher’s Movie Matinee is sufficiently loose in its conception and open-ended in its execution as to invite varied readings.

CHRISTOPHER’S MOVIE MATINEE SEEMS AS CONCERNED WITH CAPTURING ITS SUBJECTS’ SPIRIT AND CELEBRATING THEIR INNOCENCE AS IT IS WITH GIVING VOICE TO THEIR IDEALS.

The film apprehends a movement in flux at a time when youth-driven movements were novel and most often met with dismissal and hostility. It offers a portrait of rebels with only the most hazily defined causes: where the much-publicized protests, seen in black-and-white archival footage, were undertaken with a specific goal, the kids with whom Ransen collaborates express a rangier dissatisfaction with establishment values generally and varied concerns with current events, such as the escalation of the war in Vietnam. Christopher’s Movie Matinee is a film about challenging hierarchies, both on the macro level of governance, education, and citizenry, and on the micro level of documentary filmmaking and the myriad compromises undertaken when real life is sculpted into spectacle.

What was perhaps less apparent in 1968 than it is today is the degree to which the film is also about the transformation of cities, how they generate factions of culture and class, and how dissent becomes domesticated, police require greater scrutiny, and public space is ultimately governed not by public need, but rather by the twin hegemonies of capitalism and consumerism. If you’re familiar with Midtown Toronto yet find that you can’t recognize a single setting in Christopher’s Movie Matinee, there’s a reason for that: virtually all of the area’s former funk has been bulldozed away so as to make things more comfortable for developers and the affluent. A key scene in the film finds Councillor Lamport announcing his hopes that Yorkville will flourish as a shopping center. This statement is met with a round of chuckles from the young people on hand, but history ensured that Lamport got the last laugh. Today’s Yorkville is home to high-end retail, boutique hotels, haute cuisine, and million-dollar condos: the very antithesis of that 1960s bohemian haven. Whether you regard this transformation as inevitable probably depends on how cynical you feel toward the ostensible integrity of baby boomers and the so-called hippie dream.

While Ransen’s unshared directorial credit is to be regarded as something of a formality, his dominion as the film’s editor is writ large in almost every sequence. Christopher’s Movie Matinee is awash with the influence of the Nouvelle Vague and its most flamboyant acolytes in English-language pop filmmaking, such as John Boorman, Arthur Penn, and Richard Lester: note the scene in which a field trip to a deserted building results in some amiable Hard Day’s Night hijinks. Ransen deploys enigmatic freeze-frames and mischievous non sequiturs. He injects abrupt hard cuts to generate a staccato, strobe-like audiovisual mosaic, alternating between diegetic sound and bursts of folk rock. (The film’s music, and title, was furnished by 3’s a Crowd, a band from Vancouver very much of its time, with self-consciously trippy song lyrics about, for example, how great it is to chew gum.) Perhaps this sensorial battery was intended to echo the jackhammer heard intermittently during the film’s opening sequence, which also features a girl listening to some undisclosed recording on headphones and marveling at its resemblance to the sound of being inside a spaceship.

The Godardian emphasis on cinematic artifice is, I suppose, less alienating in the context of nonfiction than it might have been in a fictional narrative, but the absence of superimposed titles, voiceover, and other such devices meant to orient the viewer was certainly a significant break from Canada’s robust documentary tradition. At one point, one of Ransen’s “kids” makes reference to Marshall McLuhan, whose canonical, collage-like The Medium Is the Massage, co-authored with Quentin Fiore, was published the previous year. The University of Toronto superstar lecturer and media theorist’s ideas on technology as content surely encouraged Ransen’s subversion of generic norms as a way to honor his subjects’ call to interrogate the status quo. 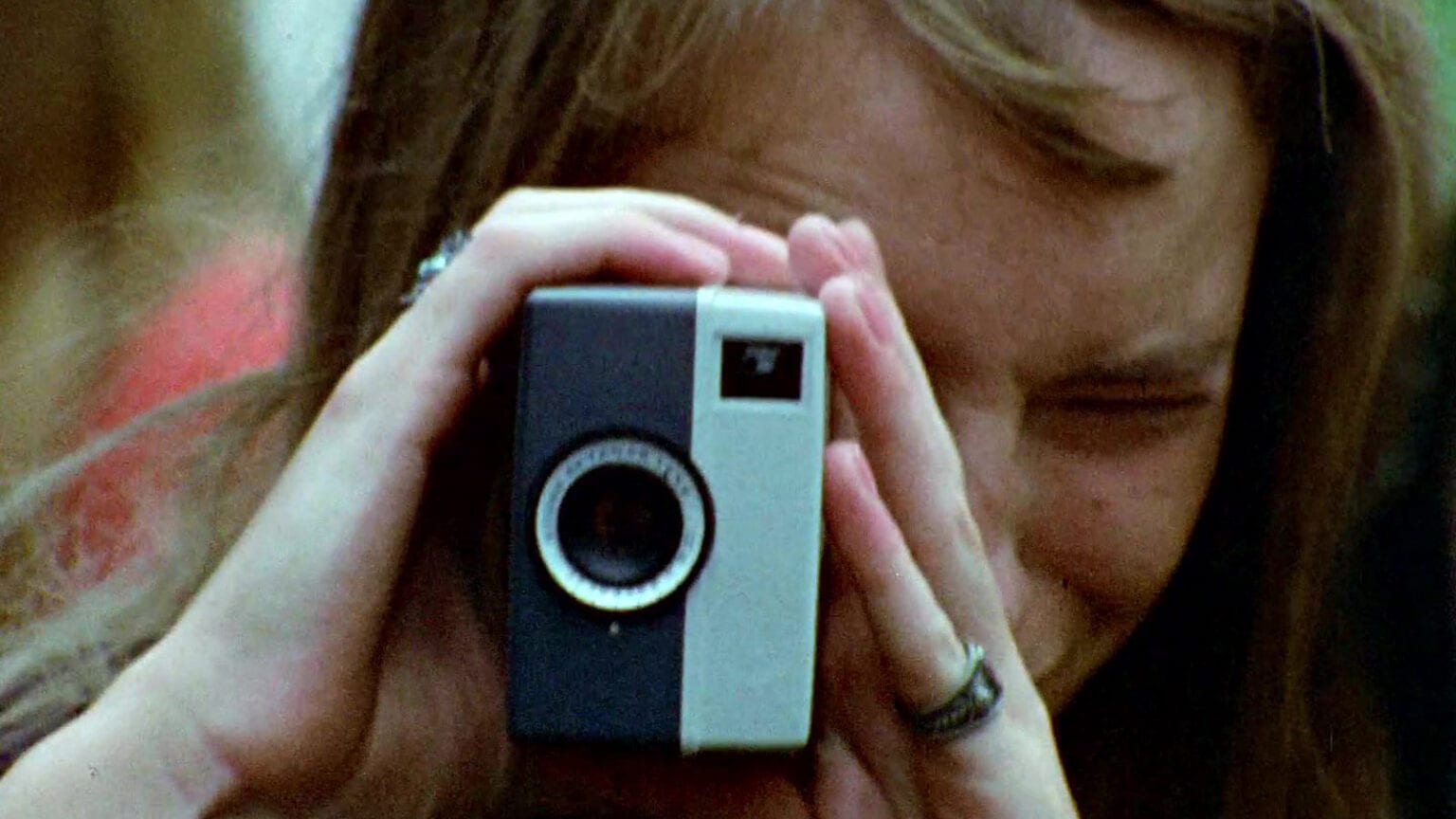 Christopher’s Movie Matinee seems as concerned with capturing its subjects’ spirit and celebrating their innocence as it is with giving voice to their ideals. Ransen devotes a significant portion of the film’s runtime to some fairly circular debates concerning whether to shoot parking meters or ladybugs. There is a long sequence in which the kids occupy a classroom and enact a kind of kangaroo ethics class, which finds the speakers sentimentalizing the ostensible wisdom of children and disputing the very essence of organized education, all while passing around a Clarks Desert Boot to be used as an ashtray. There is a deeply endearing scene in which a young woman named Doreen gets teary-eyed while confessing that she’s never been so happy as she was during the film shoot. Raw catharsis seems to be one of the film’s by-products.

The more pertinent and overtly political scenes in Christopher’s Movie Matinee are those that place its subjects in direct confrontation with authority figures. The most notable example of this depicts a town hall meeting between Lamport and local activist David DePoe, which the film’s teenage cohort attend, staging a sort of sit-in, with many donning dark sunglasses and tucking flowers behind their ears. The purpose of this meeting seems to have been to enlighten municipal officials as to the frustrations and ambitions of Toronto’s radical youth, but Lamport expresses only token interest in the discussion; mostly he uses the occasion as a platform for his characteristic blend of avuncularity and condescension. The kids score at least one ideological point, however, when, following Lamport’s query into why this generation seems allergic to work, a young man points out that everyone in the room is there to perform the same task on behalf of the public good—though it’s only Lamport who’s getting paid for it.

The City Hall sequence is immediately followed by a lengthy, high-friction encounter on a teeming city bus between a World War II veteran and one of our cohort’s more unfiltered spokesmen. (That gendered term is, alas, intended: women are given precious few opportunities to speak when the group is confronting their square adversaries.) The besuited veteran responds to questions about what it means to be a responsible citizen with growing exasperation, especially when his interlocutor claims, rather risibly, to identity with the plight of Black Americans in the Jim Crow South. (The young man also seems to be confused about the meaning of the word “reactionary.”) The scene is one of many that draws attention to the film’s paucity of people of color and the youth movement’s undeniably privileged perspective, realities that don’t fall under the purview of the film’s direct-cinema modus operandi, but which inevitably contextualize contemporary readings. Among its other characteristics, Christopher’s Movie Matinee is a time capsule, reminding us just how large of a role whiteness played in the counterculture gaining a place at the table.

The shooting of Christopher’s Movie Matinee had to be aborted prematurely. After an article in Toronto’s Globe and Mail suggested that the so-called hippies had wrested control of the project, and that Ransen and his crew were directly involved in the organization of demonstrations, the National Film Board pulled the plug and called back all personnel to its Montreal headquarters. It was a despairing development, yet it ultimately provided the film with a more poignant conclusion than it might have found otherwise, placing Ransen precisely on the threshold dividing his subjects from the network of institutions whose insistence on conformity they rejected. Asked by one of the kids if he thinks he can make a film out of the material they’ve accumulated, Ransen says, “I don’t know,” his reply immediately followed by another freeze-frame, giving the anti-director the last word. I believe Ransen’s dramatically equivocal answer was, in the moment, an honest one, and that the film he subsequently crafted was the best possible representation of his experience. Indeed, the only correct ending to this story was the inconclusive one: youth is fleeting; rebellion is, to some extent, an end in itself; and the revolution is ever directing our imagination toward the future.

José Teodoro is a critic and playwright. 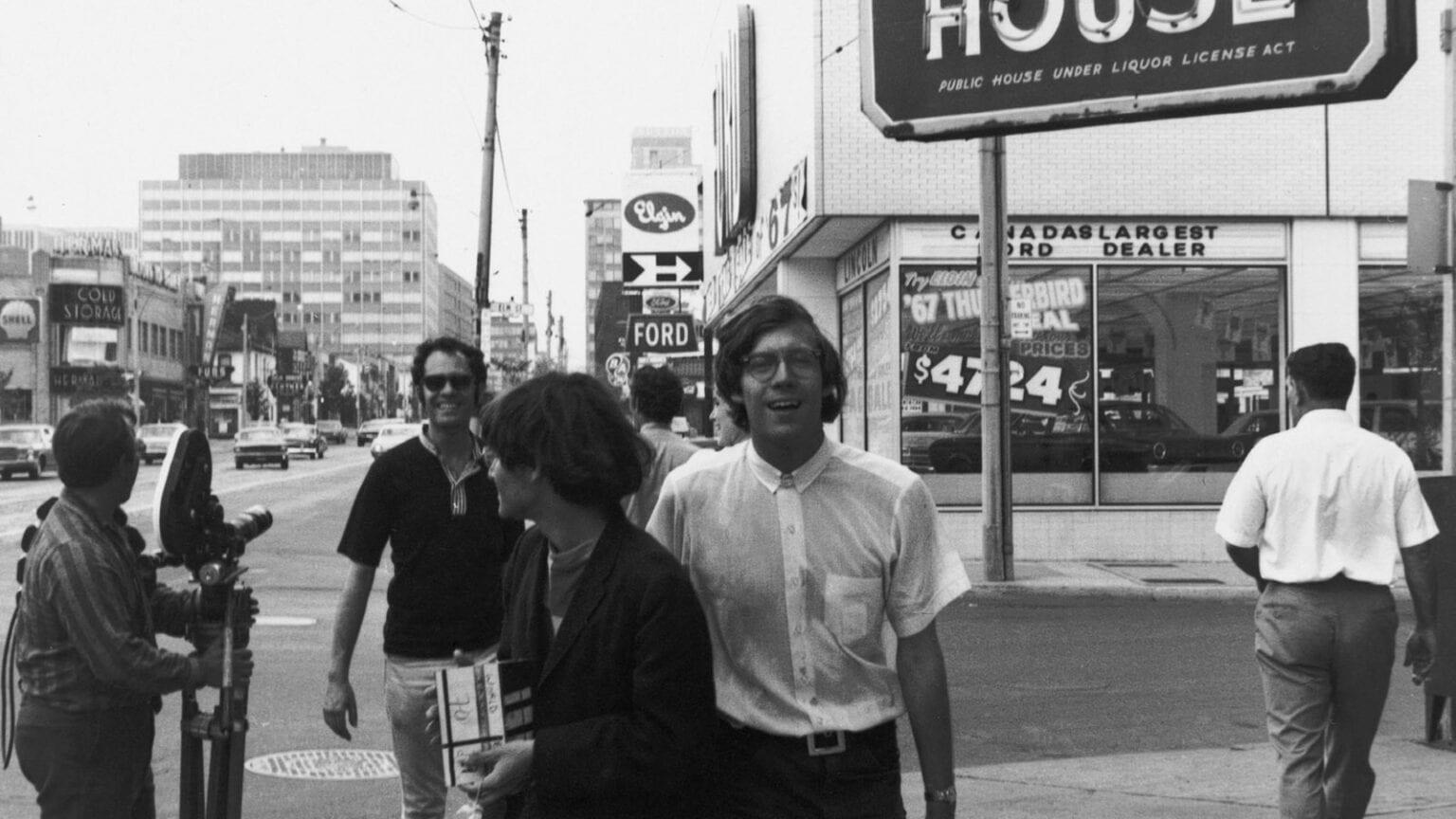