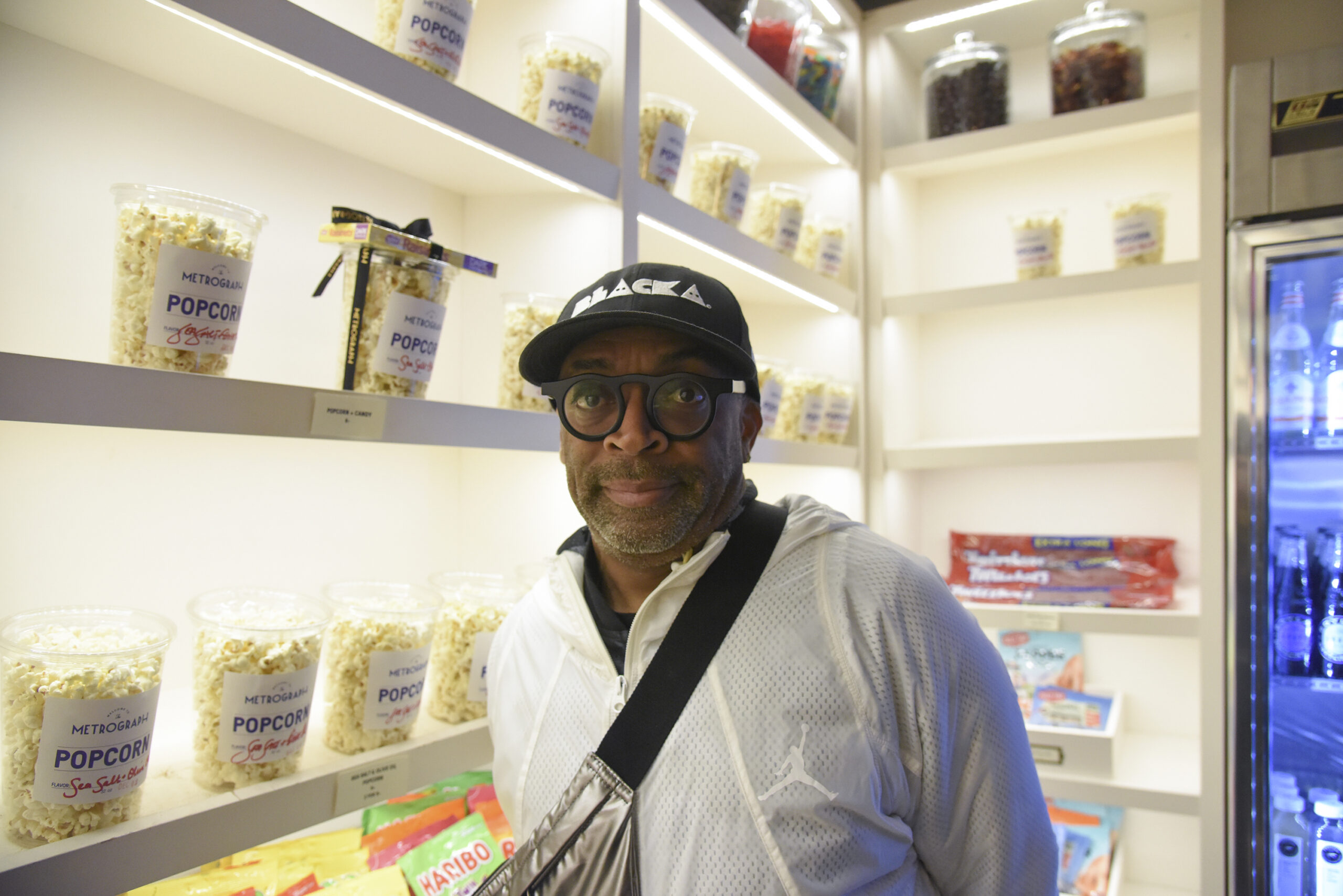 Spike Lee joined Metrograph in person during the 2016 presidential election to present two favorite films:
Ace in the Hole and
A Face in the Crowd.

The legendary, prolific, fearless New York filmmaker Spike Lee visited Metrograph in 2016, smack-dab in the middle of an election year, personally curating a series of the films that have influenced him most, including Billy Wilder‘s Ace in the Hole and Elia Kazan‘s A Face in the Crowd.

In a wide-ranging conversation with Metrograph Artistic Director Jake Perlin during the 2016 presidential election, Lee touched on the Academy Awards, the rise of Donald Trump, and his lifelong admiration for his late friend, the screenwriter Budd Schulberg.

SPIKE, YOU’VE BEEN SHOWING A FACE IN THE CROWD TO YOUR CLASSES FOR YEARS. ONE OF THE PHRASES YOU ALWAYS USED TO DESCRIBE THIS FILM WAS THE CRYSTAL BALL. FIVE YEARS AGO, WHEN YOU WERE THINKING ABOUT THIS MOVIE AS A CRYSTAL BALL, COULD YOU HAVE IMAGINED WHAT’S BEEN HAPPENING LATELY? THE FILM SEEMS TO ME, ULTIMATELY, OPTIMISTIC THAT SOMEONE LIKE A LONESOME RHODES COULD BE PUT DOWN. BUT IT FEELS LIKE TRUMP IS LONESOME RHODES PLUS INDEPENDENT MONEY, AND THAT CAN'T BE STOPPED.

I‘m not gonna lie and say I did not see Donald Trump coming at all. I don‘t think he believed it. He said, you know, ”Let me give it a try,“ but we’re on some serious business now. I think the fate of the world is gonna be determined by this presidential election. Because I said before… Him with the nuclear code? That‘s a real-life nightmare to me.

IN THIS FILM, YOU HAVE THE GENERAL POWER STRUCTURE PROPPING LONESOME RHODES UP. BUT NOW, SOMEONE WHO’S INDEPENDENTLY WEALTHY DOESN’T EVEN REQUIRE THE PARTY TO PROP HIM UP.

Well, he got to a point, but he was not gonna be President of the United States without the cahoots with the Republican Party. Trump had a meeting, and they’ve worked it out so he will be the nominee for the Republican Party. Before, he was financing everything himself. Now, he’s just not doing it anymore. He’s going to get money from the GOP.

“I’M NOT GONNA LIE AND SAY I DID NOT SEE DONALD TRUMP COMING AT ALL.”

COULD YOU TELL ME A LITTLE BIT ABOUT YOUR FRIENDSHIP WITH BUDD SCHULBERG?

Well, we were friends, and met through the great boxing legend Bert Sugar. Budd and I wrote a script together. It was called Save Us, Joe Louis. It was an epic script about the relationship between Joe Louis and Max Schmeling. Budd was at both fights, both in Yankee Stadium. And then in the second fight, Joe Louis knocked Schmeling out in the first round, and many people thought that the winner of that second fight would determine who would win World War II. Would it be democracy over fascism? So we wrote this script. Hitler was in it. FDR, Lena Horne. I mean, we had everybody in it. And, once a month, Budd would call me and say, ”Spike, got the money yet?“ I said, ”We don’t have the money yet.” And so, you know, I made a promise to him that I’d get the money. So, one day, for Budd Schulberg, I’m gonna get this film made about Joe Louis and Max Schmeling. 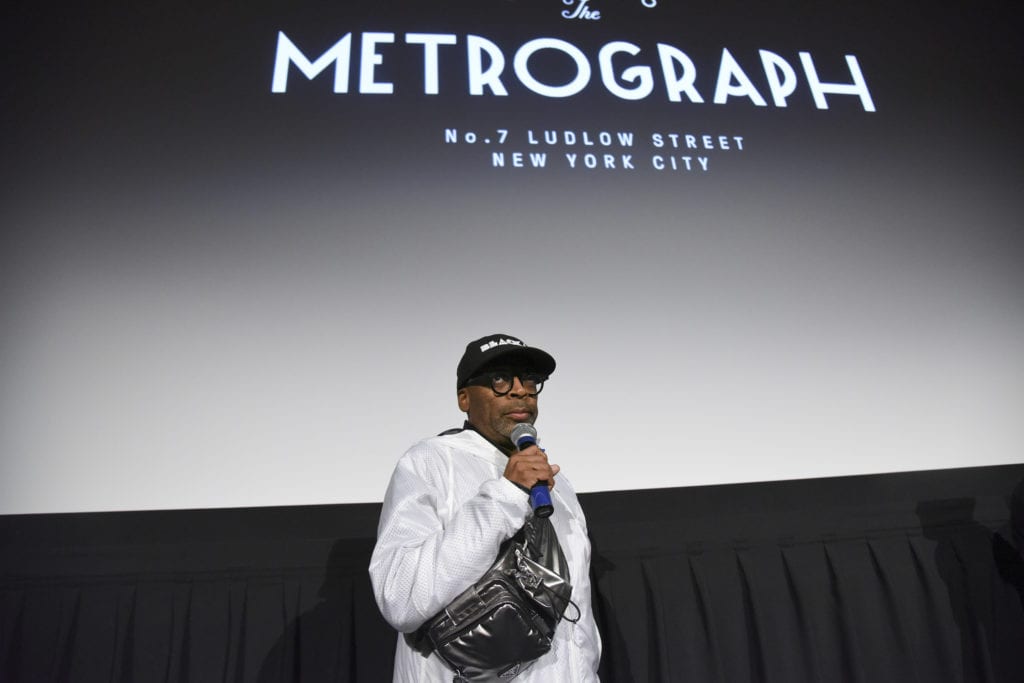 JUMPING OFF ON THE NOTION OF TRYING TO FINANCE FILMS, AND HOW FILMS LIKE A FACE IN THE CROWD AND ACE IN THE HOLE GOT MADE, YOU’VE SAID IN THE PAST, “THESE ARE THE FILMS AFTER THE HUGE SUCCESSES.”

Well, a lot of people don’t know the dynamic duo of Elia Kazan directing and Budd Schulberg writing the scripts. The film before this was On the Waterfront. How many Academy Awards did it win? It was a Best Picture winner. That’s the height of heights. And this was the next film, and nobody went. It was a complete bomb. Critics hated it. The public hated it. It was just too dark for America at the time.

Ace in the Hole followed Sunset Blvd. They even changed Billy Wilder’s name for the film. They called it The Big Carnival and cut it up. So both these films follow what were Billy Wilder’s and Elia Kazan's biggest, most successful films, and nobody went. I mean, you can only put so much—I know this firsthand—in the Academy Awards and stuff like that. The good shit is gonna endure. And even though nobody went to see both of these films, and they did not get a great critical response, they still hold up.  For me, that's what’s important.

THERE ARE REALLY ONLY A SMALL HANDFUL OF BEST PICTURES THAT ACTUALLY ENDURE. I DON’T THINK THAT ANYONE’S PSYCHED TO SEE IF A REPERTORY THEATER IS EVER GOING TO SHOW CRASH OR DRIVING MISS DAISY OR CHARIOTS OF FIRE... 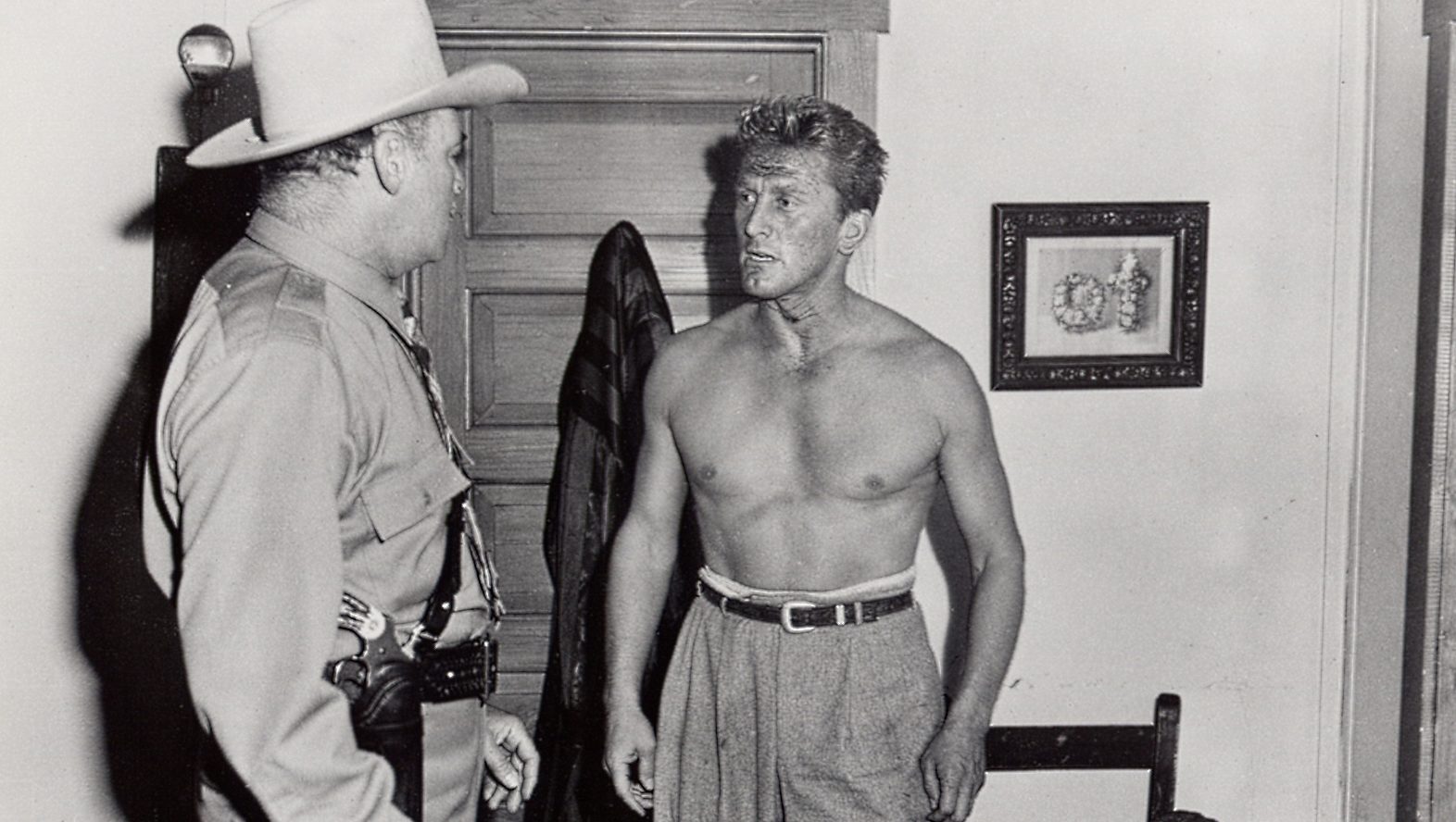 Ace In The Hole

SUNSET BLVD. AND ON THE WATERFRONT ARE TWO OF THE FILMS THAT WERE ACKNOWLEDGED IN THEIR YEARS AS THE BEST FILMS, AND DECADES AND DECADES ON ARE STILL GENERALLY UNDERSTOOD TO BE MASTERPIECES. AND THAT’S VERY UNUSUAL FOR ACTUAL BEST PICTURE WINNERS. WHAT WAS THE ONE FOR YOU? WAS IT MIRACLE AT ST. ANNA AFTER INSIDE MAN?

No, but I wouldn’t say that. I wouldn’t compare what I’ve done to Kazan and Billy Wilder. Martin Scorsese talks about this a lot. Among Hollywood directors, they say, ”One for you, one for me.” I never considered myself a straight-up Hollywood director. I’m an independent filmmaker, and I have one foot in Hollywood and one foot in independent cinema. This is never like a ”one for me, one for you“ thing. Those were back in the days when directors had studio deals.

I WAS JUST THINKING THAT INSIDE MAN GROSSED A HUNDRED MILLION DOLLARS. I’M CURIOUS TO KNOW IF IN THIS DAY AND AGE, THAT STILL GIVES YOU A LITTLE BIT MORE LICENSE OR SWAY.

No, no, no. Those dynamics are out the window. I mean, there’s not one film I want to see this summer. I looked at what was coming out, and I was like, “Shit.“ It’s bleak if you don’t like comic books and superheroes. To me, it's sad. When I was growing up, the blockbusters really had a specific time: Memorial Day to Labor Day. Now, studios want a home run with every film out, and that’s not just relegated to Memorial Day to Labor Day. It’s 12 months.

I just find it interesting that that could happen in art. You do a piece of work that’s lauded all over, and your next thing, you know, 100 percent of people dismiss it. Folks like Budd Schulberg and Elia Kazan, they were confronting so much with the rise of television, the new power of TV. You see, they’re visionaries, and a lot of times, when you’re a visionary, whether in business or art, people think you’re crazy.

When Ted Turner said, ”I’m gonna have a 24-hour news station,“ people said, ”Get the fuck outta here. Who’s gonna watch the news for 24 hours?“ Phil Knight made the soles for Nikes in the waffle iron in his home and sold them out the back of his truck… they said, “Who was gonna buy a sneaker called Nike? How do you even say that? We got PF Flyers and Converse. You know, you don’t need anything else.” I mean, there’s so many examples of artists, businesspeople who were ahead of their time. That’s why they call them visionaries, and that's why people have a hard time recognizing them. A visionary sees something before other people see it and they’re labeled a lunatic. Like, go to Rikers. Or not Rikers, but Bellevue, 8th floor. I think these two films are visionary work by Wilder and Kazan. That’s why you’re here, too, I think. 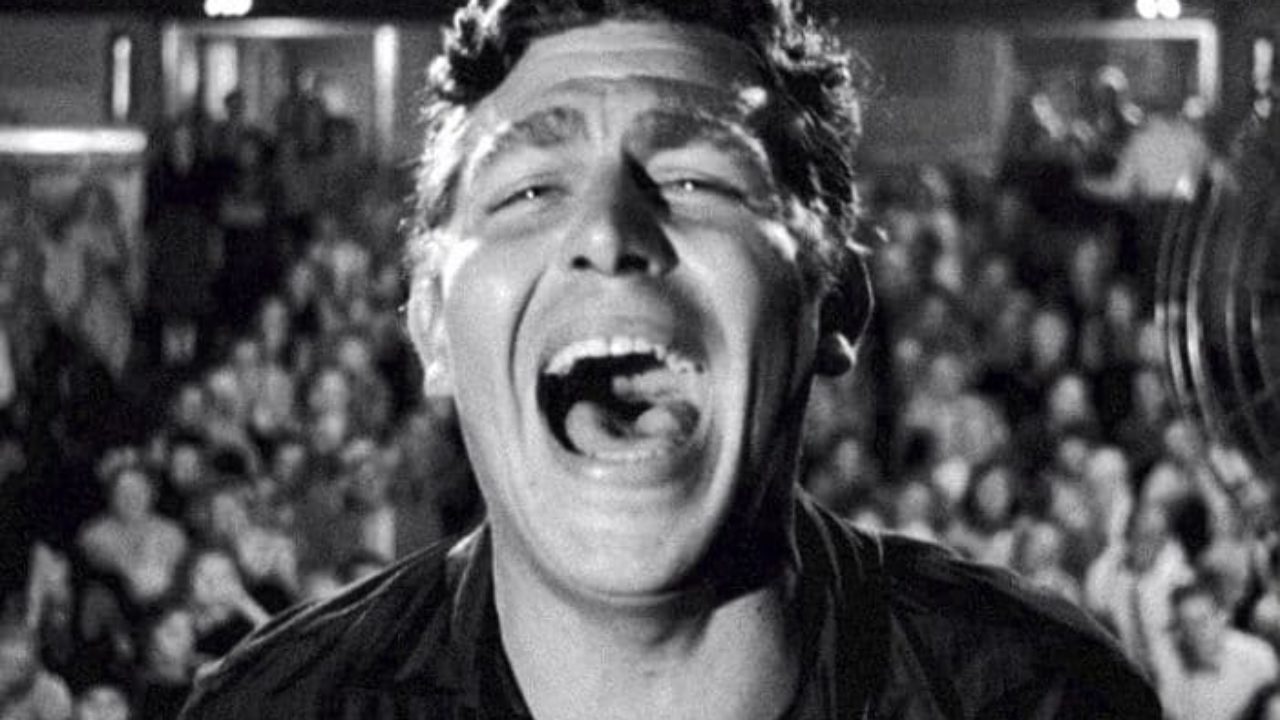