In 1969, Susan Sontag and Agnès Varda sat down together while promoting their films Duet for Cannibals and Lions Love.

In 1969, during the 7th Annual New York Film Festival, two film directors with movies in the Official Selection entered a New York public TV studio to discuss their work.

Both directors were appearing at the festival with new films about sexual relationships arising amid complex group dynamics, and both movies were made away from their home turf. The French director Agnès Varda was in town with the Hollywood-set Lions Love, and Susan Sontag with her directorial debut, the Swedish production Duet for Cannibals.

What took place in the TV studio was a revealing public discourse about cinema, gender, and intellectual life during wartime. The episode of Camera Three came to be known colloquially as “Lions and Cannibals.”

The following is an abridged version of their conversation, focusing on Sontag.

Announcer: Today, Camera Three welcomes two most exciting new film directors, Agnès Varda and Susan Sontag, in a discussion of their work and the condition of the modern cinema. We should see excerpts from their films: Ms. Varda‘s Lions Love and Ms. Sontag’s Duet for Cannibals, both of which have been accorded the honor of being shown at the seventh annual New York Film Festival. There are interesting similarities and differences in the work of these two filmmakers. Duet for Cannibals is Ms. Sontag’s first film, she being primarily known as a literary critic and an unsentimental observer of the state of contemporary culture. Lions Love is not Ms. Varda‘s first film. She is French and yet she made this film in America. Ms. Sontag is American, but she made her film in Sweden. Both films might be described as being interested in the grotesque, and yet both might also be described as political. Both are quite certainly films could not have been made 10 years ago. Unraveling some of these matters with Ms. Varda and Ms. Sontag is another Camera Three guest today: Jack Kroll, senior editor of Newsweek.

Jack Kroll: I‘m sure you know, and as Susan Sontag certainly knows because you‘ve written about this kind of thing in the arts, the Andy Warhol film and your famous essay on Camp and so forth, for a lot of critics—

JK: No, but I mean the underground film and the non-establishment film and so forth and so on.

SS: Well, I haven‘t written about that either, but I have opinions about it. 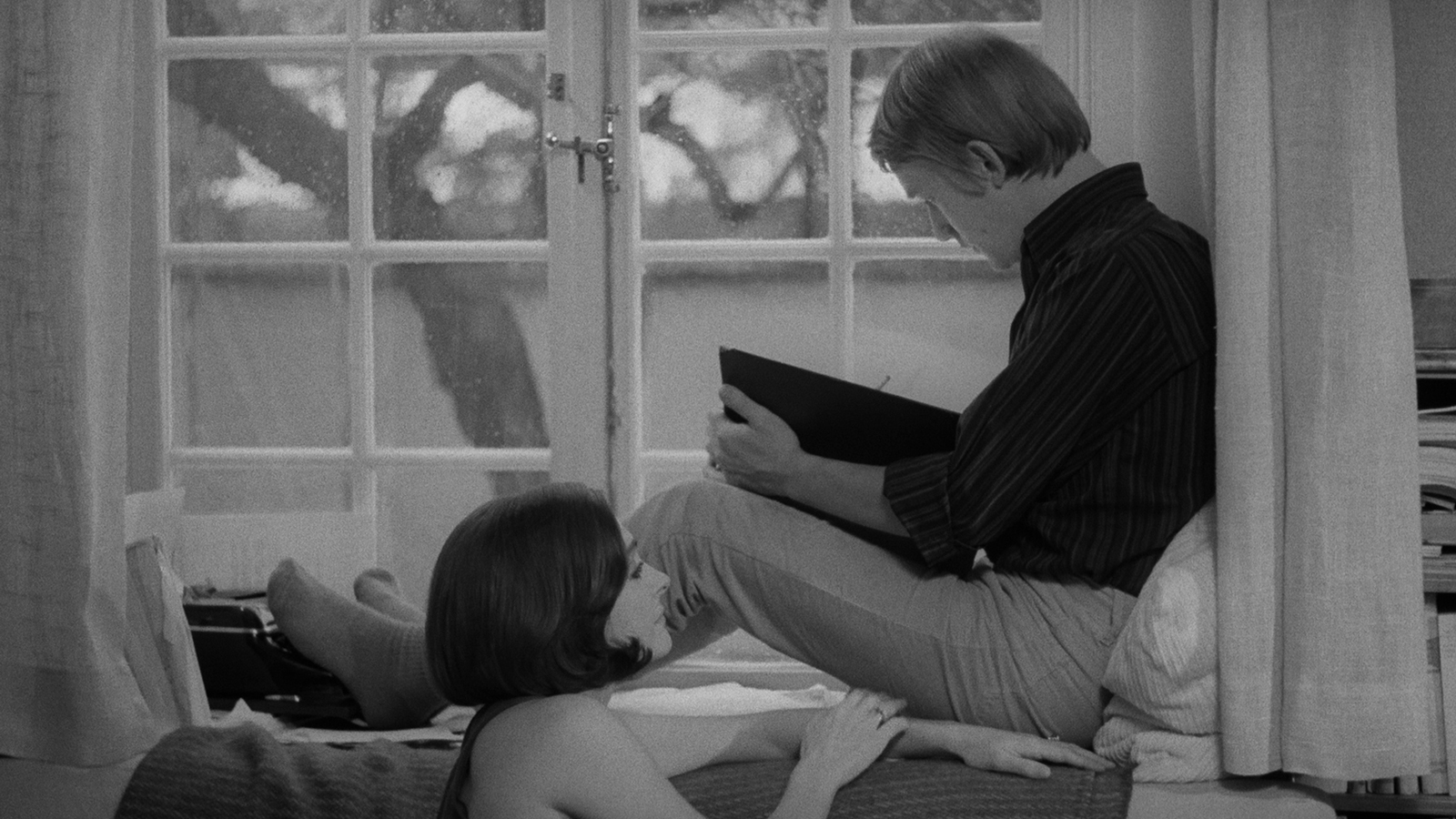 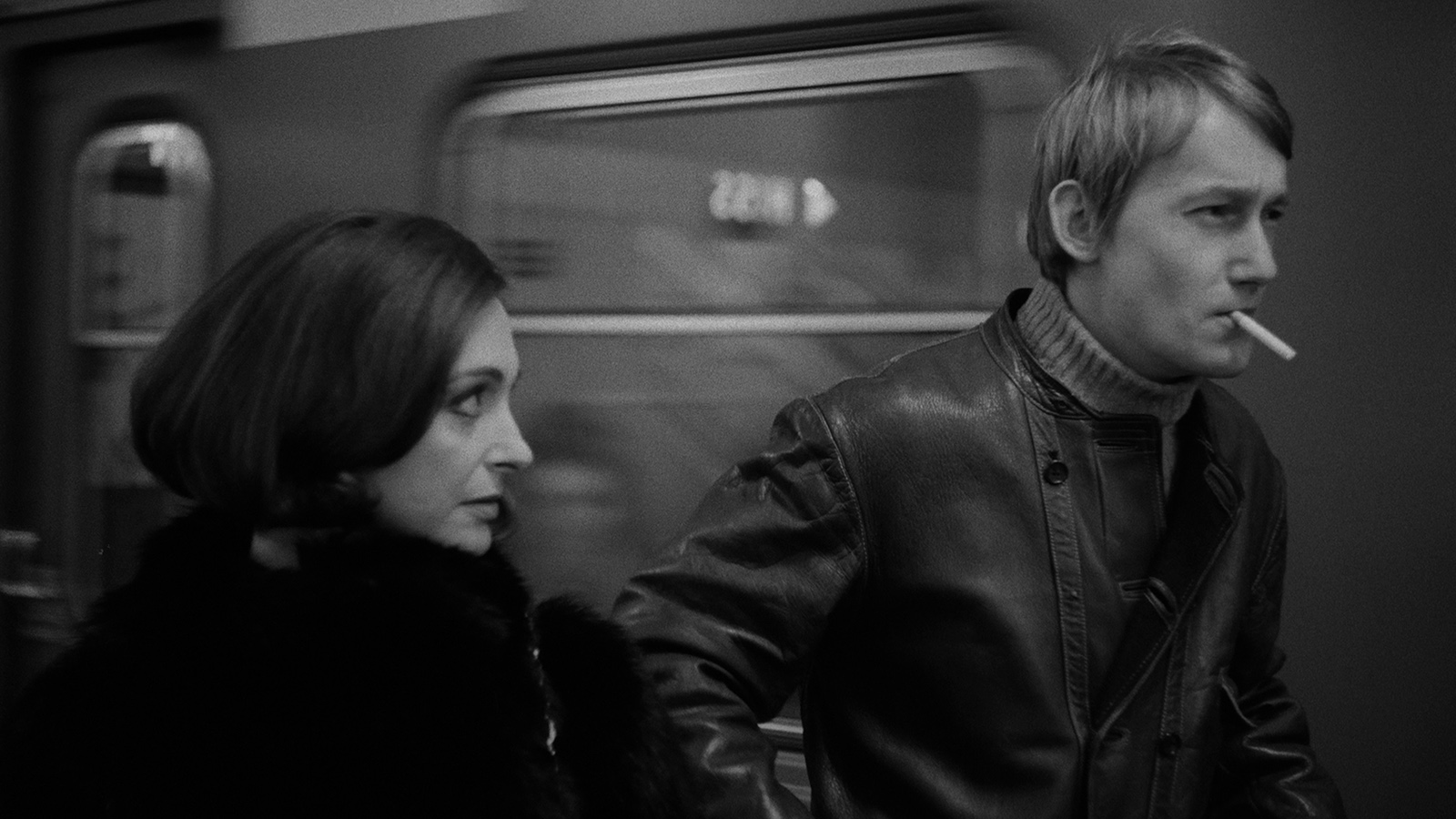 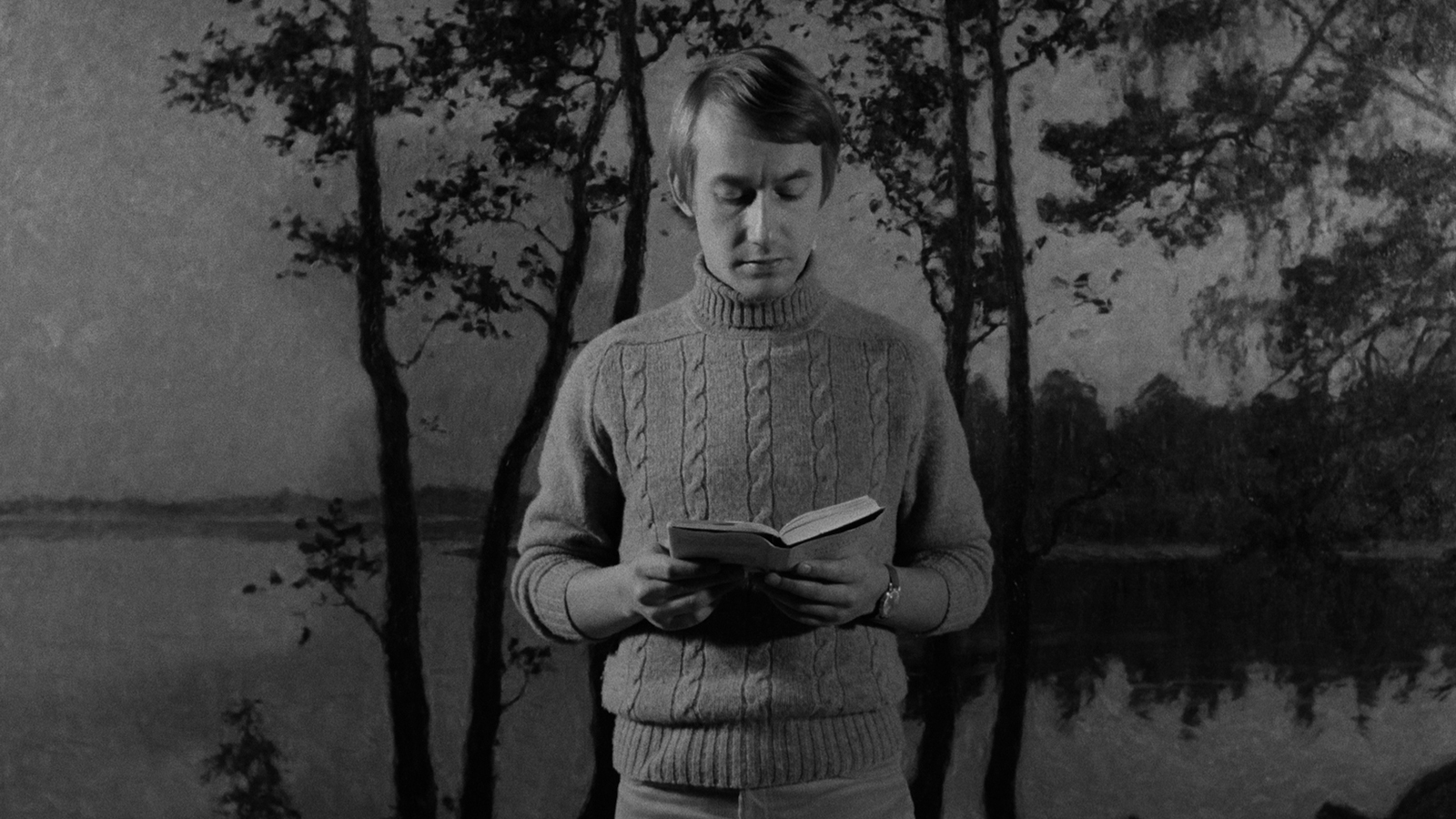 JK: Well then, let me ask the both of you. As you know of course, for many, maybe most critics, establishment-type critics, let‘s say, the gradual and yet in some sense sudden and rather astonishing entrance and influence of people like Warhol and performers such as Viva, these people have started to very strongly influence the mainstream in filmmaking and in culture generally. Here they are. They used to be on the margins and on the fringes and were seen by a very limited type and number of people. And suddenly we find them in your film, and this upsets a lot of people. I‘m being the devil‘s advocate here. You hear, ”Why should we be interested in these people? What is the significance of this kind of person and of their characteristic experience for us?” I think it‘s a question of some importance and I‘d like to hear what both of you have to say about it.

SS: I disagree completely with you, Jack, because I think one of the things that I like best about Agnès’s film is it‘s one of the few films that I‘ve seen in a long time where I recognize real people. And far from being grotesque, as I said, one of the interesting things about the film is that there really are lots of people like this and that the film shows them. Whereas most people you see in movies have very little relation to real people. That isn‘t bad either. I mean, that‘s one of the conventions of art. The relation of art to real life is very complicated and very ambiguous. I mean, in the average Hollywood movie, you don‘t see real people, either mainstream people or marginal people. You see ideas that people have about what people are supposed to be or the way people are supposed to be represented—

Agnès Varda: And also the language problem. I mean, I‘m not the best one to argue about the way of speaking. But the way people speak in real life is rarely presented in movies.

JK: Although those barriers are being more and more broken down, aren‘t they? In film and on stage, and in literature.

SS: It was about time. Just take a very simple thing like the fact that people traditionally in films don‘t interrupt each other when they talk. You say your line, another person says his line and so on. Whereas everybody interrupts each other in real life.

JK: Now in your film, Duet for Cannibals, we have on the other hand, people who on the surface appear to be in the mainstream. We have Bauer, who is some sort of political philosopher or pundit professor, whatever he may be. You have the young man and his mistress, you have Bauer‘s wife. On the surface: John Kenneth Galbraith, Arthur Schlesinger, if you will. And yet, as the film develops, as we get to know these people more and more, especially Bauer, especially the philosopher, the political scientist, whatever he is, we find that behind the seemingly normal or mainstream surface there are convolutions and all sorts of interesting things that one would not see in the public dimension. So perhaps that is one point where these films come together.

SS: Yes. Well in a sense, the older couple, Bauer and his wife, they‘re actors. In the story of the film, he‘s a political refugee, a political leader of will and his Italian wife. But one of the possible ways of looking at the film is that they‘re really actors, that this is the role that they‘re playing in this relation with the younger couple and, but they don‘t know what they‘re like at all, so that the surface, while it‘s realistic, is not at all necessarily genuine. Whereas the younger couple is treated quite realistically. There are lots of people like that.

JK: Well, even to the point of questioning what is life and what is death, you find Bauer and his wife shifting back and forth until one can hardly be certain at the very end of the film who is alive and who is dead. Now, this is really carrying role playing to an extreme. So I think in both of these films you have people who are so caught up and involved with role playing on a very different level.

AV: Anyway, what I like in Susan‘s story, it‘s about vice. And it is really... I mean the vice, it‘s not the way you live, it‘s the way you intend to spoil people. And that meaning is very clever.

“THE RELATION OF ART TO REAL LIFE IS VERY COMPLICATED AND VERY AMBIGUOUS. IN THE AVERAGE HOLLYWOOD MOVIE, YOU DON’T SEE REAL PEOPLE. YOU SEE IDEAS THAT PEOPLE HAVE ABOUT WHAT PEOPLE ARE SUPPOSED TO BE.”

JK: In your film, you have these people living together. And eventually in Susan‘s film, you have a ménage à quatre in a sense. The four people come together in a very disquieting way. Let me ask you, it‘s a very strange movie. Politics. Yeah. I think it‘s a bit strange. Politics is involved in some way. One is forced to think about that category. And as Ms. Varda has said, vice and therefore virtue I suppose. But you mix up all the human categories in a fascinating way. The sexuality of these people, the ideology of these people are played with in, I think, a unique fashion. And although it‘s the gauchest possible question, why? What‘s going on here?

SS: Well, you‘re really asking several questions at the same time. As far as the politics goes, I just picked that background to locate the story. It‘s not a political film. It assumes a certain political milieu, which since I made the film in Sweden, it‘s even more realistic, more just for Sweden, for Stockholm let‘s say. Perhaps for New York, can certainly find similar circles in any big city like New York or London or Paris. But what‘s important in the film or the material of the film is the relationships between the people within that situation or in that background. And it doesn‘t necessarily have to be a story about people involved in politics. The basic story is the relationship of the two couples.

JK: I think one tends to think of people who seem to exist primarily in the public eye as somehow separate subspecies. They are public effigies. And one is sometimes shocked when brought nose to nose with it, in the case of the Kennedys in various ways. These are living human beings with all, as I said before, all the labyrinthine convolutions that belong to us and to characters in the novel by Dostoevsky. And for me that‘s a powerful point. You may not have meant to make that point in your film, but I think it‘s no accident that you do have an ideological character at the center.

SS: Yes, because the attraction of the younger couple to the man, to Bauer, is because they admire him. He‘s a hero of theirs for his ideology. And of course they don‘t even think about what he‘s really like as a person, and they resist thinking about it as long as possible because they want to go on admiring him.

JK: People‘s minds are being changed. Stock reactions are being replaced by the reality of it because the reality is developing. It‘s increasingly being shoved in all of our faces. All of us are being forced to change our minds in one way or another.

JK: It‘s been remarkable to me, looking at the films in the seventh New York Film Festival, how this theme of apocalypse seems to pervade almost all of them. Films from practically every country where films are made. The sense of, on the one hand, finally finding the authentic person or realizing that this is the search that has to be made, and at the very same time, being conscious of this completely impending disaster. I‘d like to ask both of you about that. You‘re both international people. You travel around the world, you‘re intellectuals. That‘s a bad word. You‘re women. That‘s a good word. I‘d like to ask you both to comment on this. What is this mood? Why do we all feel it?

AV: I think there is a smell of disaster.

JK: Why? What is the disaster?

SS: It‘s really so. I mean, because every bit of evidence that you get gives you that sense. People are writing about ecology. Look at the ABM. Look at the Hundred Years‘ War in Vietnam. Look at the war in Laos.

JK : What do you think is going to happen specifically?

SS: Well that‘s not fair, but things are bad and one has a feeling that they‘re going to get worse.

AV: As artists, we feel the pressure. As people and as artists, there is no way to just to be light and say, ”You know, let‘s make a comedy about Hollywood” or “Let‘s make it just a sexy and fancy story.”

SS: Everybody has that sense. Especially with our contact with young people, you feel it even more. I mean, I think Agnès and I having lived into our adult lives are still not quite as pessimistic as 16 and 17 year olds are. They really don‘t think they‘re going to live to grow up. •