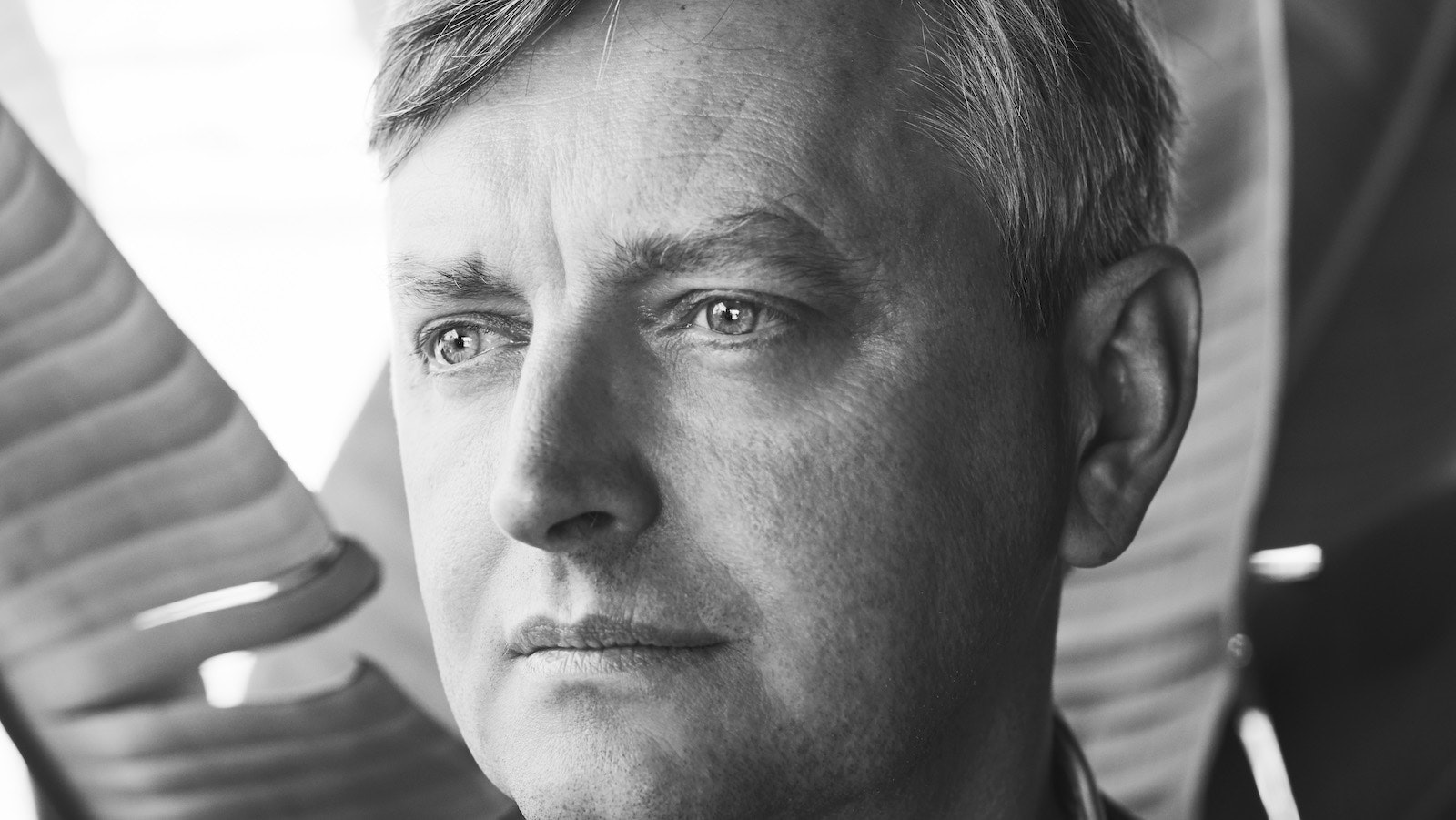 Losnitza’s State Funeral and The Event screen at Metrograph December 18, and Maidan screens December 19, as part of Kon Trubkovich’s series The Russians Love Their Children Too.

What makes the Belarus-born Sergei Loznitsa’s cinema so unsettling is that he dares as few do to look reality dead in the eye, working in a laconic, observational mode that hearkens back to early cinema, while fixing an unblinking gaze on distinctly 21st-century phenomena. In 2016, Loznitsa was asked by the International Documentary Filmfestival Amsterdam (IDFA) to compile a program of Top 10 films, which then screened at Metrograph. His selection highlights nonfiction films that have made a deep impression on him, including some films that remain little-known outside of the former USSR.

"This happened long before I even started thinking about becoming a filmmaker: one day I was walking down a street in Kiev and I suddenly saw a film poster advertising a very peculiar title. I decided to take a look and entered the cinema. The film, which I watched in an almost empty movie theatre, astonished me. Is it possible to speak about such things? And to speak so brilliantly! Koma is a rare example of a film about the Gulag which was shot during a short period of relative freedom in post-Soviet society. This film deals with an issue which remains a taboo subject in Russian culture. It is a feature film shot in the documentary style."

"It is simply a fortunate coincidence that this film survived years of censorship during the Soviet ‘60s and was finally released at the end of the ‘80s. The director made it together with his students, and this ‘cover‘ of being a film school project made the entire production possible. The film presents the horror of war as an existential drama, which radically differs from the traditional Soviet approach, in which war is presented almost exclusively through the prism of patriotic pathos." 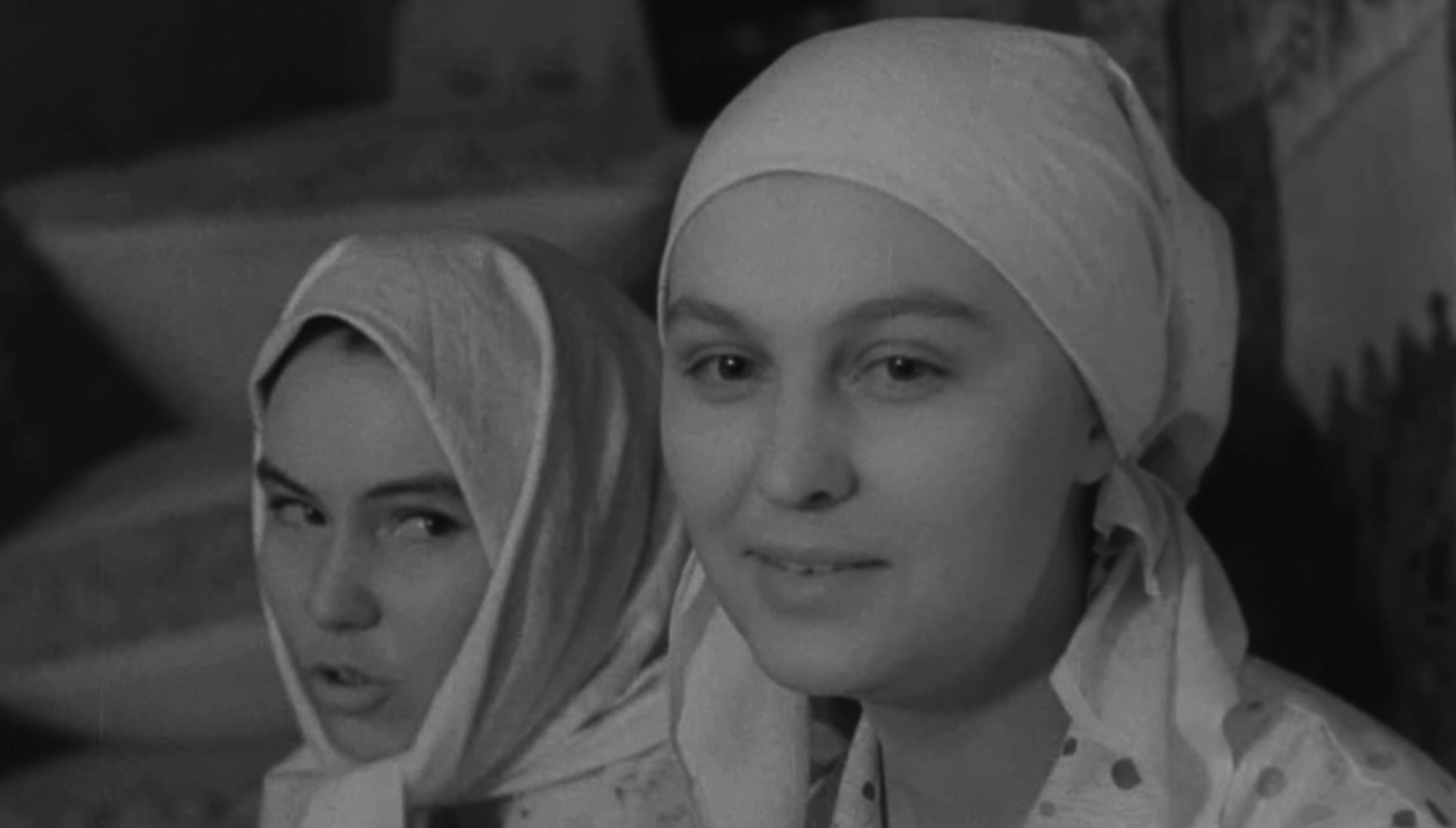 "I would have loved to include all the documentary films by Vittorio de Seta into this program. They are all worthy of our attention. Between 1954 and 1959, De Seta shot a series of 10 films about settlements lost in the most remote parts of the Italian countryside. I Dimenticati is made in the mountains of the Cosenza province during the celebration of ‘Festa dell’abete.‘ It seems to me that my documentary work is rather close to De Seta’s—I’m trying to narrate stories about revolutions, feasts and cemeteries in remote communities which escape our attention. I admire the laconic style of his films."

"The intention of the filmmaker was to denounce the white émigré movement and to give one of its leaders a chance to publicly confess his sins and to admit his mistakes. However, when the film was released in 1965, the charisma, the impeccable manners, and the exquisite Russian language of the protagonist charmed the Soviet spectators to such an extent that the documentary became a box-office hit. Soviet people were queuing up to marvel at a real Russian aristocrat, the likes of which had been completely eradicated in the USSR by the 1960s. The film became such a success with audiences that the authorities decided to ban it."

"Otar Iosseliani, a Georgian filmmaker, who has been living and working in France for many years, is very dear to me. In 1988, Iosseliani shot this elegant miniature piece. At first glance, a small monastery and the Tuscan village which grew up around it exist in parallel worlds, but at the same time, one cannot help thinking that one of these worlds is somehow safeguarding the other."

"I have never used interviews in my films. I don’t think I ever will. I have a kind of aversion to interviews as an artistic method. Kieslowski’s film is an interview with a man for whom life has lost its purpose; it is a very intimate conversation and its composition and visual dramaturgy are so impeccably crafted that I take my hat off to the master." 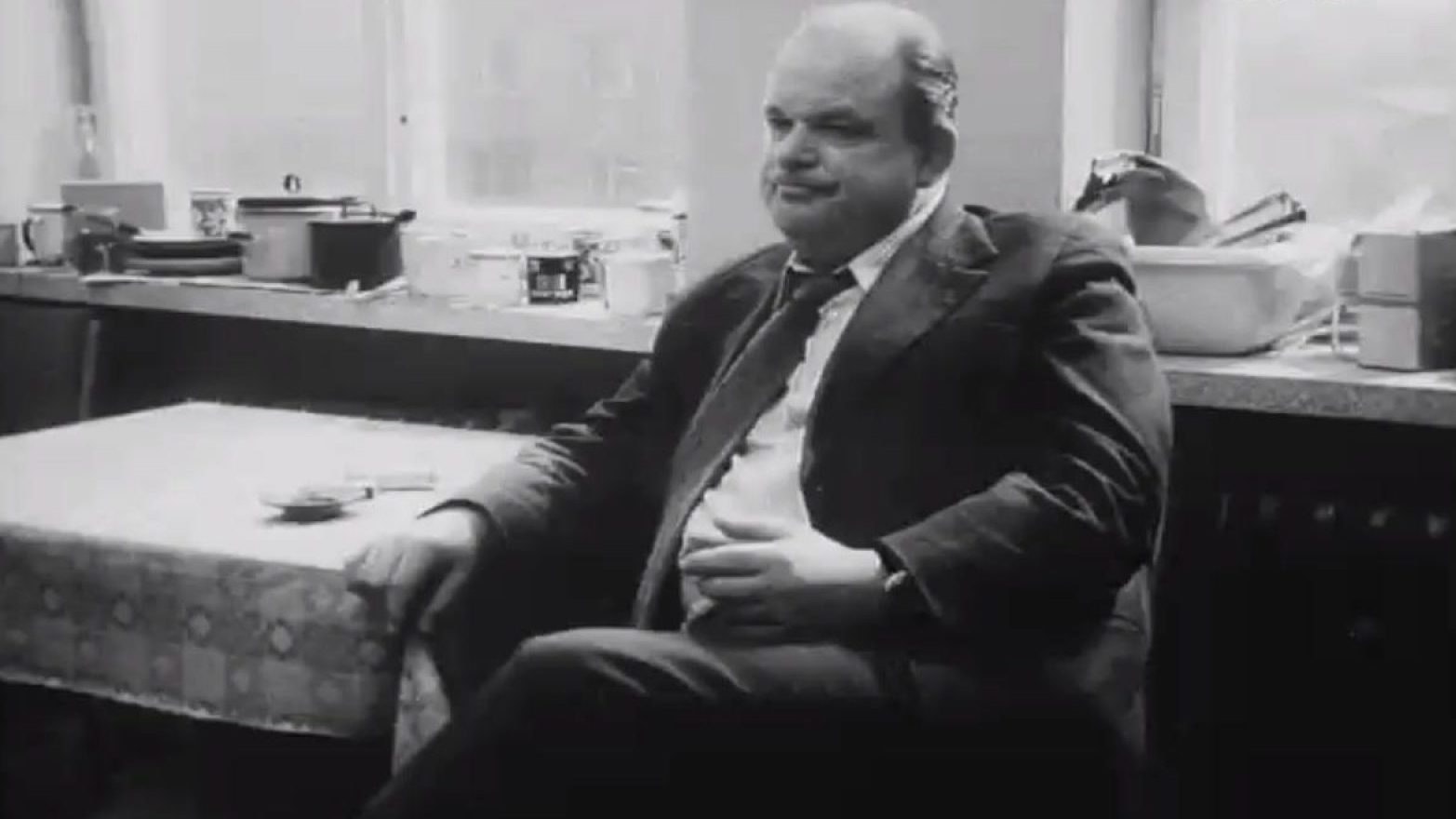 "One day I discovered, to my complete astonishment, that the show trials organized by Joseph Stalin to sentence innocent people, who were at the time proclaimed to be ’the enemies of the state,’ were filmed and used to create propaganda documentaries. The clip which I saw first and which inspired me so much came from 13 Days. The Industrial Party Process. The accused incriminate themselves and confess to crimes they had never committed. They sound so convincing, and their ’performance’ seems to be so genuine, that one cannot help feeling astonished and bewildered by the force of the diabolical enigma, which chained these people—the victims and the prosecutors—to each other."

“This film was made in 1937 and was instantly shelved. It remained banned in the USSR for many years. This is a paradox in itself. Dziga Vertov was a passionate communist, whose films glorified every change brought to Russia by the October revolution. At the same time, Vertov was a genius, and in Lullaby these two sides of his personality clashed to such an extent that the genius defeated the propagandist. The film revealed the essence of the Stalinist regime so precisely that Stalin, who understood it, immediately decided to hide the film.” 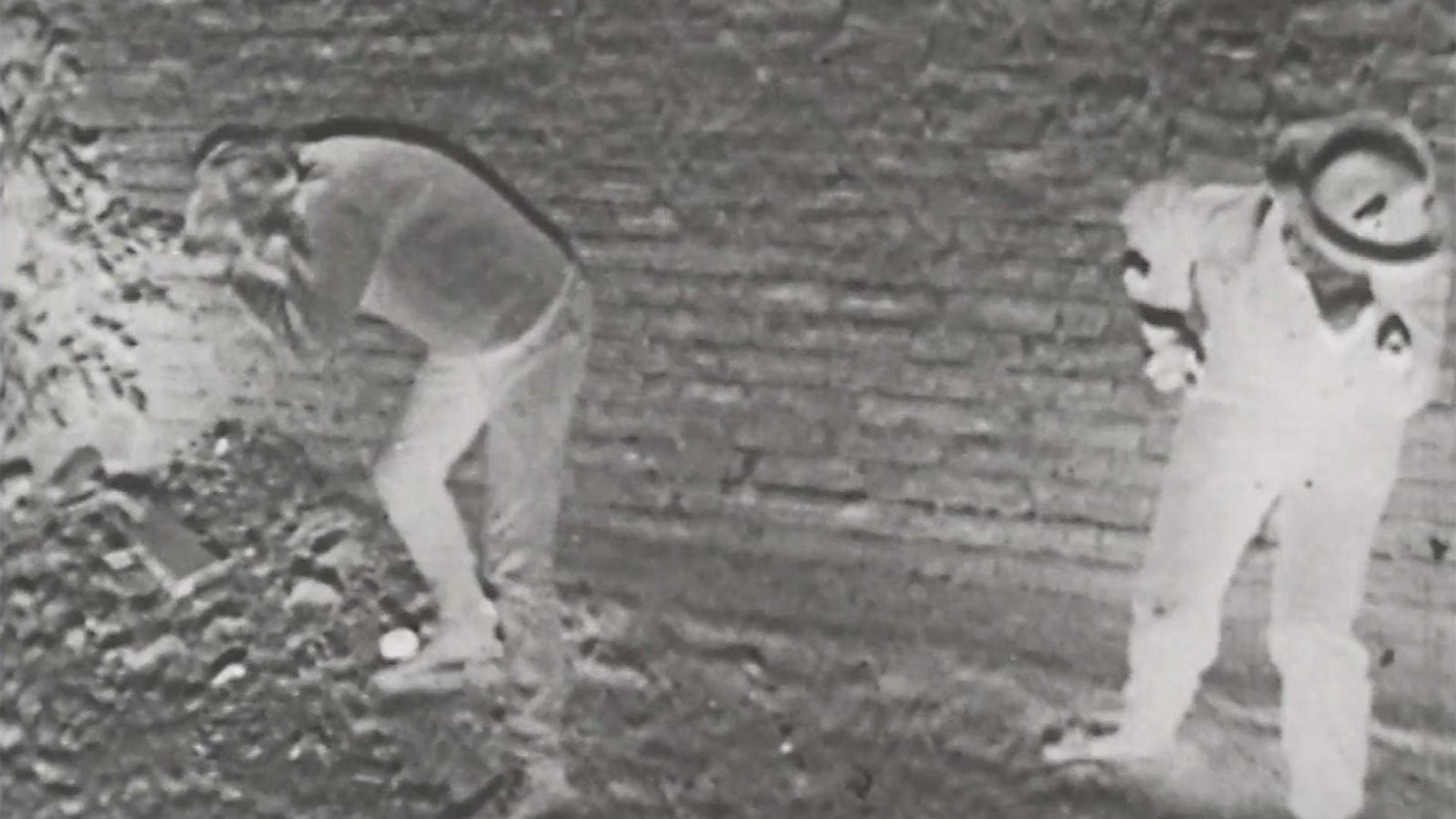 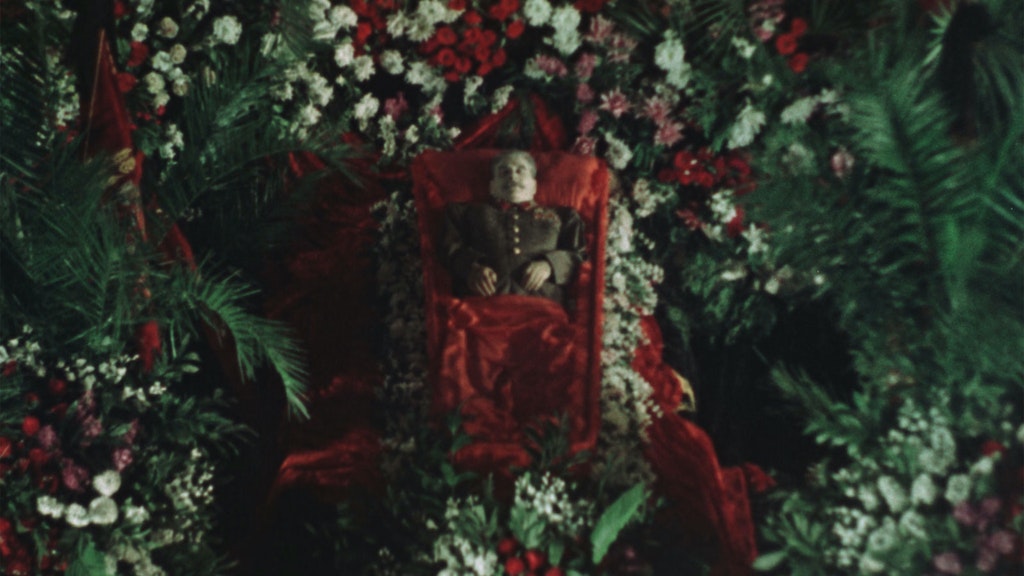 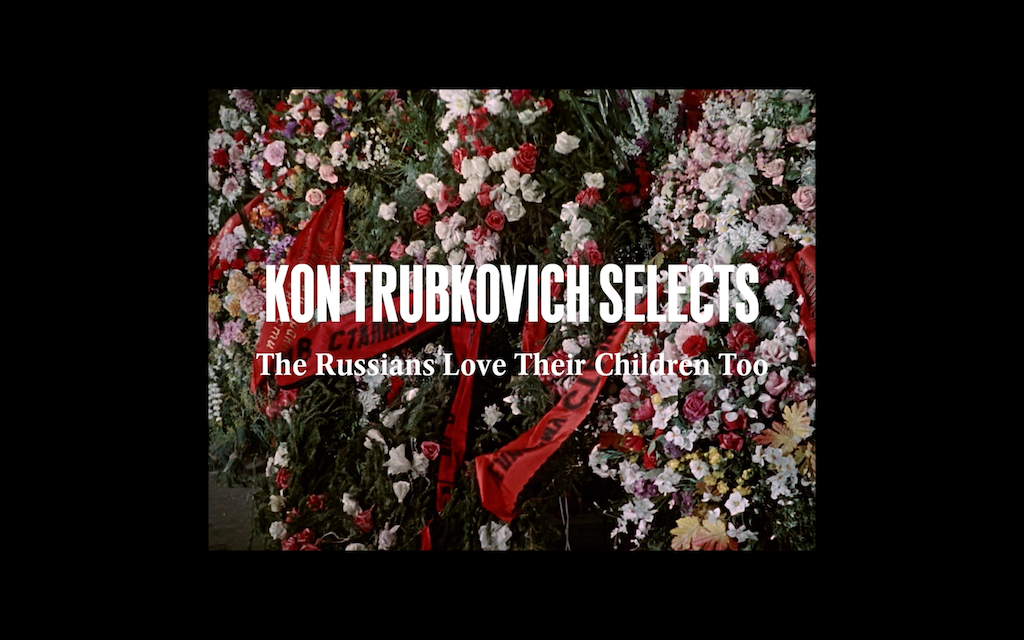 Gagosian and Kon Trubkovich Present The Russians Love Their Children Too