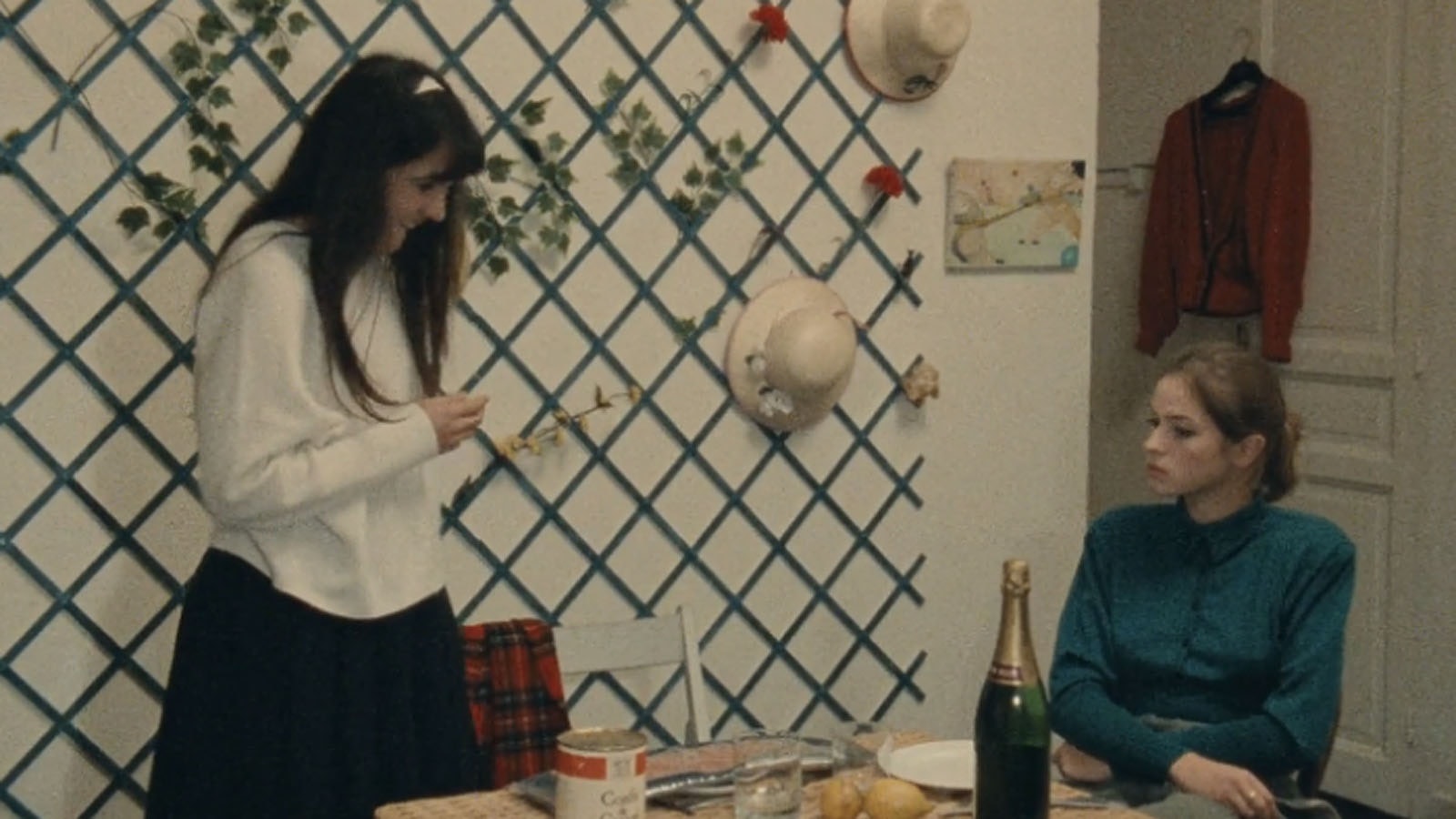 The perennial French auteur creates masterfully designed, inviting spaces that anchor us in this rootless moment. 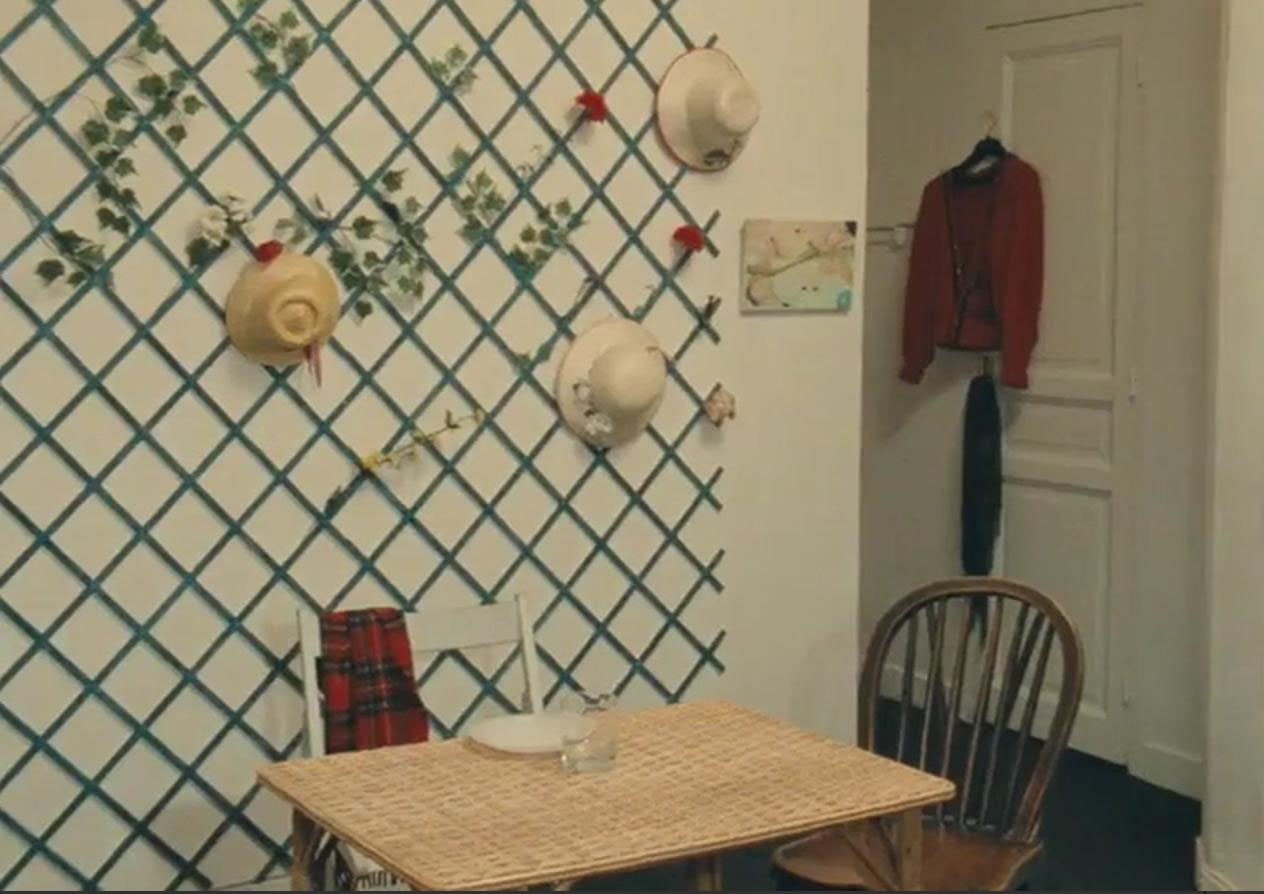 There’s been a Rohmer resurgence of late. Stills from his films are all over Instagram. A recent GQ article details Rohmer’s fashion trends. And Metrograph hails this the “Summer of Rohmer” through a three-title series. His pleasurably aesthetic films have a unique cyclicality to them. Within their simple, elegant plots, beautiful young people are constantly being tempted, falling in love, and getting their hearts broken. But perhaps what’s drawing people most to Éric Rohmer right now is the deep connection his films have to physical space. He constructs his cinematic environments with architectural precision, making these immersive worlds delightfully easy to escape into. The physical, which has often felt so abstract during the pandemic, is tangible here. Neither Paris nor a given seaside town has the facade-like feeling of a set. Instead, Rohmer renders them as spaces for the viewer to experience intimately. Part of what creates this strong sense of place is the fact that his characters are so enmeshed in their settings, always caught in a psychogeographic interplay between their emotional state and the physical spaces they inhabit.

It’s only when you zoom out and compare Rohmer’s films that you can fully see the ways in which he masterfully plays with location and character. He returns to the same settings over and over again, allowing his worlds to build on each other. Like an epic classical concert, there’s a geometric web of connections woven in, creating variations and riffs on the same themes. His films are predominantly set in two different, opposing spaces: the countryside and Paris. Especially in his two six-film series, made from the ’60s into the early ’70s (“Six Moral Tales”) and in the ’80s (“Comedies and Proverbs”), Rohmer obsessively and deftly explores the interdependence between characters’ emotional journeys and French cityscapes or natural landscapes. A pair of his films from 1987, Boyfriends and Girlfriends and Four Adventures of Reinette and Mirabelle, playfully remix and develop these two settings.

Four Adventures of Reinette and Mirabelle was released just after the completion of “Comedies and Proverbs,” and Rohmer evolves the themes he’d been exploring by bringing two characters together who are quintessential products of the city and country. Reinette (Joëlle Miquel) is a sincere, self-taught painter with strict morals living in the provinces, while Mirabelle (Jessica Forde) is a stylish, aloof anthropology student with loose morals living in Paris. In a series of four vignettes, Rohmer playfully contrasts the personalities and worlds of these two young women. The duo experience “the blue hour,” a moment of complete silence at dawn, after spending time on a farm with the Housseaus (a real-life family of farmers). Immediately after, Rohmer thrusts Reinette and Mirabelle into the chaos of Paris, where Reinette is dizzyingly given opposing directions from three different people on her way to a café.

If Four Adventures of Reinette and Mirabelle is about contrast and tension, Boyfriends and Girlfriends is about aesthetic uniformity, both visual and psychological. 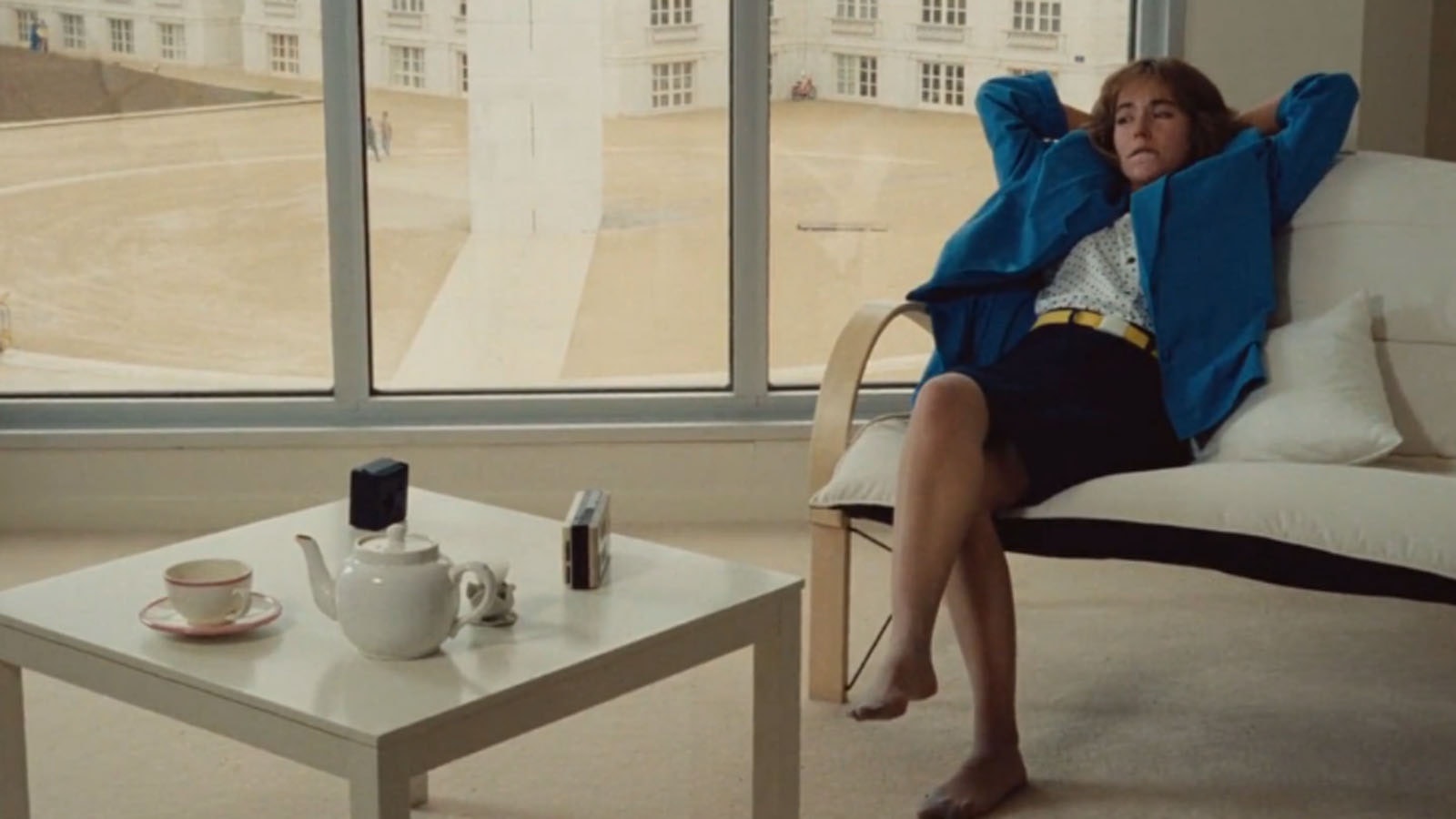 While Four Adventures of Reinette and Mirabelle explores the contrast between urban and rural settings from the perspective of its characters, Boyfriends and Girlfriends takes a more physical approach. It’s set in a liminal space between city and country—the modernist and newly built communal living space of a French “new town.” The characters reside in Cergy-Pontoise, a cloistered, state-funded assemblage of communes intended to house Paris’s growing population. New towns were initiated to facilitate an alternate way of life, with everything a community could need in one convenient space. The first of five new towns erected around Paris, Cergy-Pontoise was designed to be entirely self-contained, with shopping malls, cafés, apartment complexes, schools, ample public space, and easy access to nature. This modern architectural utopia was not only new ground for French living standards but also a departure for Rohmer from the classicism of Paris or the quaint architecture of rural France.

Throughout Boyfriends and Girlfriends, Rohmer creates synchronicity between characters and settings in several artful ways as the film follows a new class of modern, young professionals, who, comfortably divorced from old ways of life, decide to live in a modernist, just-built commune. When filming began, the construction of Cergy-Pontoise was on the precipice of completion after more than a decade of planning. The characters in Boyfriends and Girlfriends, like Cergy-Pontoise, are slow-building developments, and newly emergent. They are all at the beginning of their careers and adult love lives. Léa (Sophie Renoir), a computer-science student, lives between her boyfriend Fabien (Éric Viellard) and her parents. Not only is her house situated in between spaces, but she’s also in a constant state of flux about whether or not to leave Fabien. Blanche (Emmanuelle Chaulet) is a bureaucrat with no friends in the area. She’s also in the eternal process of almost making a romantic move for Léa and Fabien’s friend Alexandre (François-Éric Gendron). Still under construction, but on the verge of a fresh beginning, Blanche lives in the Belvédère, a new, eerily empty apartment complex.

If Four Adventures of Reinette and Mirabelle is about contrast and tension, Boyfriends and Girlfriends is about aesthetic uniformity, both visual and psychological. Rohmer leisurely constructs the characters’ internal worlds and slowly builds out their self-actualization. Their psychological states not only mirror their living situations but also shape their relationships with one another. The communal and cloistered architecture of Cergy-Pontoise facilitates many of the film’s chance encounters to take place. The characters in Boyfriends and Girlfriends move and come together in organic ways, whether crossing paths en route to work or sighting one another through the window of a café. This allows for new geometries and relationships to form among them. Blanche and Léa meet serendipitously when Léa asks to share a table at a communal cafeteria. The two, living and working so close together, cement their friendship by going swimming together during Blanche’s lunch break. Later in the film, Blanche glimpses Alexandre and Fabien through a window while she’s shopping. Against the clean lines of the town’s communal spaces, she exits the shop and positions herself so that she walks directly into their sight line. The four characters’ shared geography leads to repeated encounters, both accidental and contrived.

Cergy-Pontoise also reflects Rohmer’s own sense of psychogeography. Like the architects of the new towns, Rohmer obsessively designed and premeditated his work. Before filming, he made a documentary and a four-part TV series about planned communities and Cergy-Pontoise, which go into great detail about the conceptual and practical design behind these environments. He also visited Cergy-Pontoise every month for over a year before shooting started, and had Renoir and Chaulet live there while playing Léa and Blanche. 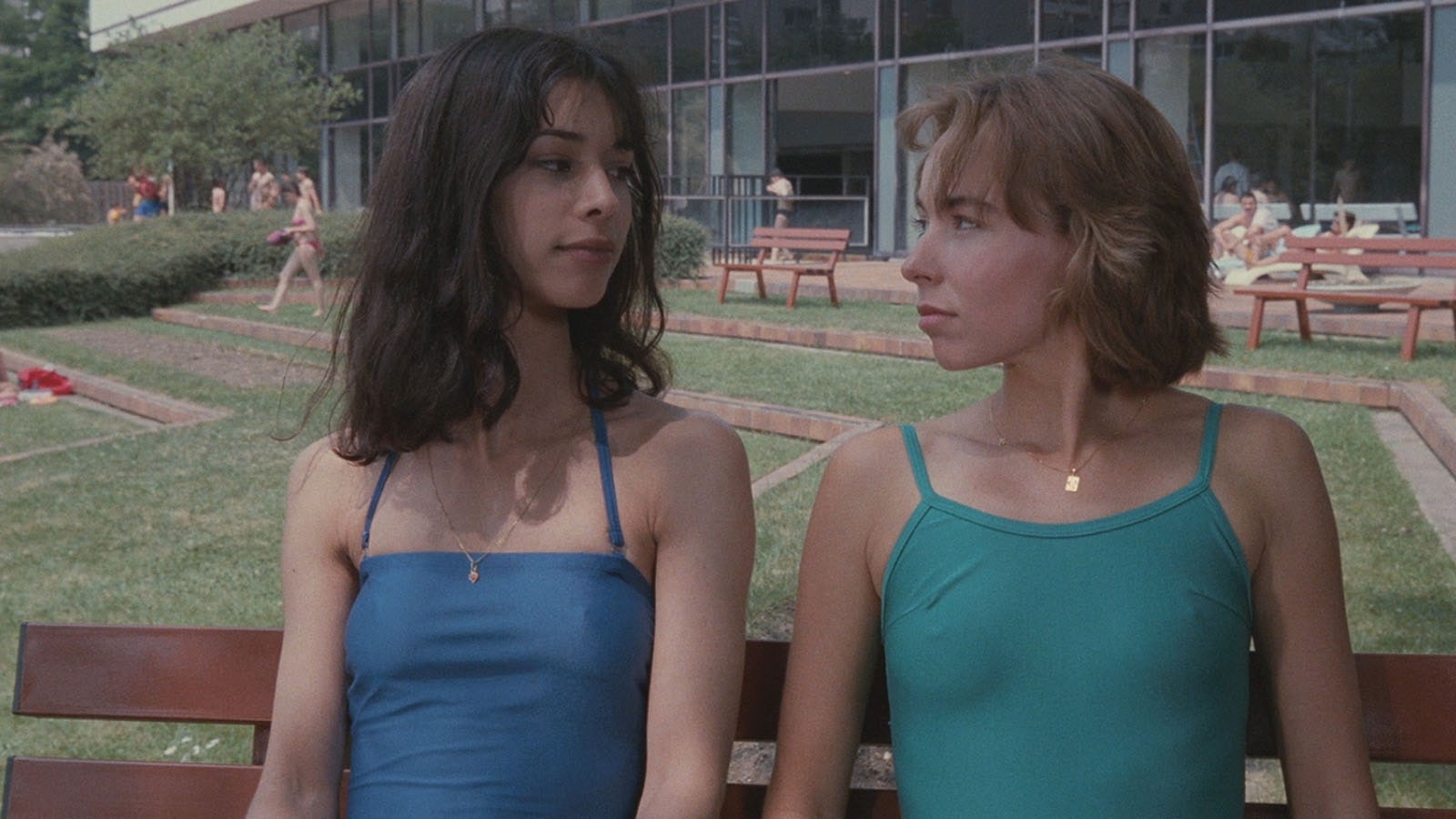 Yet, despite all the in-depth planning and blending of real-life and fictional elements in the film, Rohmer sustains the impression of a story unfolding with organic ease. He slowly brings you into his world without explicitly revealing his hand. Indeed, his disappearance into his work had a long history: a practicing French Catholic, Rohmer used a pseudonym to hide his professional identity from his parents, believing they would disapprove of his chosen career. In his prolific writing about film, he rarely used the first person. His mysterious, inconspicuous nature is also reflected in his craft. The camera stays mostly in medium-shot range, and he was never flashily stylistic in the way many of his New Wave contemporaries were. Boyfriends and Girlfriends is immaculately constructed with deft precision, revealing a commonality of thought to what the new town’s locale’s builders envisioned—designing inhabitants’ entire experience of a life without calling attention to its facade.

Beneath this illusion, though, an uncanny feeling lingers throughout the film as Rohmer reveals cracks in the smooth surfaces. When Blanche and Fabien visit a lake where visitors from outside the town also gather, it’s the first time we see people that Cergy-Pontoise leaves out. Rohmer devotes several shots to a set of racially diverse, lower-class groups, briefly revealing the world outside this cloistered bubble. Another subtle moment of self-awareness occurs when Léa critiques Blanche’s apartment complex, likening it to a “barracks.” Blanche responds by saying: “I sound like a brochure. But to me it feels like being in a luxury hotel,” to which Léa cheekily responds: “Sure, if you don’t stay too long.” Yet perhaps the most uncanny part of the film is that (spoiler alert) Blanche and Léa switch boyfriends and everything works out agreeably. They swap  partners without telling each other, both worrying that the other will be upset. In the final scene, the newly reconstituted couples simultaneously meet for lunch at the same spot, in a less-trafficked area so as not to be discovered. Léa and Blanche sight and confront each other, and, despite a brief moment of misunderstanding, once they both realize what has happened, they laugh, feeling a sense of relief. They join their new respective partners for lunch, the four of them wearing color-coordinated outfits.

This geometric neatness is unusual for Rohmer. In his previous “Comedies and Proverbs” entries, the plots deal with characters being pushed up against temptations outside of relationships, and there are never tidy or morally didactic answers. Four Adventures of Reinette and Mirabelle’s four vignettes together form a tangled knot of tension in Mirabelle’s and Reinette’s nascent friendship. After Mirabelle helps a woman get away with shoplifting, Reinette’s nun-like judgment comes out: “The only way to help the sick or people with problems is to hold a mirror so they can face up to what they’re doing.” Reinette responds with: “The problem is you don’t know why she steals. You can’t accuse someone whose motives you don’t know.” Each vignette contains situations that test their differing principles, setting forth questions about morality, not answers.

This makes Boyfriends and Girlfriends an outlier in Rohmer’s work. Before filming, he would become intimately acquainted with his locations. Cergy-Pontoise was no exception, yet his knowledge of the space existed mainly on a theoretical level, as the French new town’s way of life was still defining itself. The space gave him a blank canvas, not weighed down by messy reality or history. It’s hard to imagine a Rohmer plot playing out this neatly against the chaotic, classical backdrop of Paris—the clean geometry of modernism gave him new territory to work in. Léa and Blanche’s partner-swap resolves itself smoothly and uncomplicatedly, creating a perfect, clean-line geometric balance that most likely could never happen in real life.

Rohmer’s cinematic universe fashions a divine geometry, where previously unexplored connections and parallels can be drawn endlessly within its landscapes and characters. But perhaps the greatest beauty of Rohmer’s world is that his geometry elicits an appreciation for connections to physical space—whether it’s the city or the countryside or somewhere in between. Rohmer’s films feel like the perfect antidote to the delocalizing digital existence. Four Adventures of Reinette and Mirabelle evokes admiration for both the vibrant and chaotic life force of a city and the appeal of being totally divorced from it and immersed in natural landscapes. As much of the world stands on the potential precipice of emergence (but not complete emergence) from pandemic life, Boyfriends and Girlfriends becomes a fantastical reference point for community tied to a physical space and for new geometries and connections to smoothly form within it. •

Boyfriends and Girlfriends is available for streaming now. Four Adventures of Reinette and Mirabelle opens on August 6. 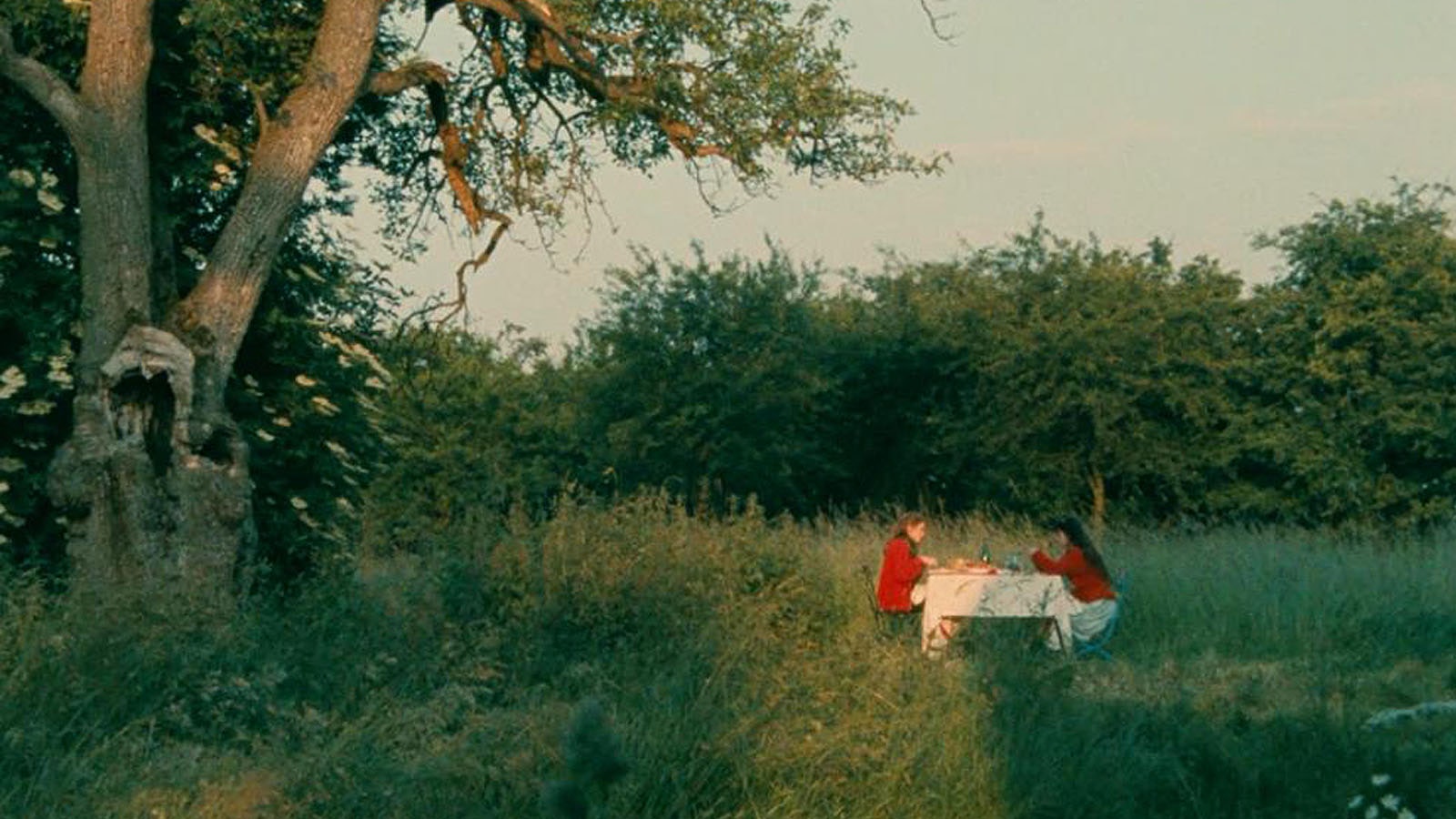 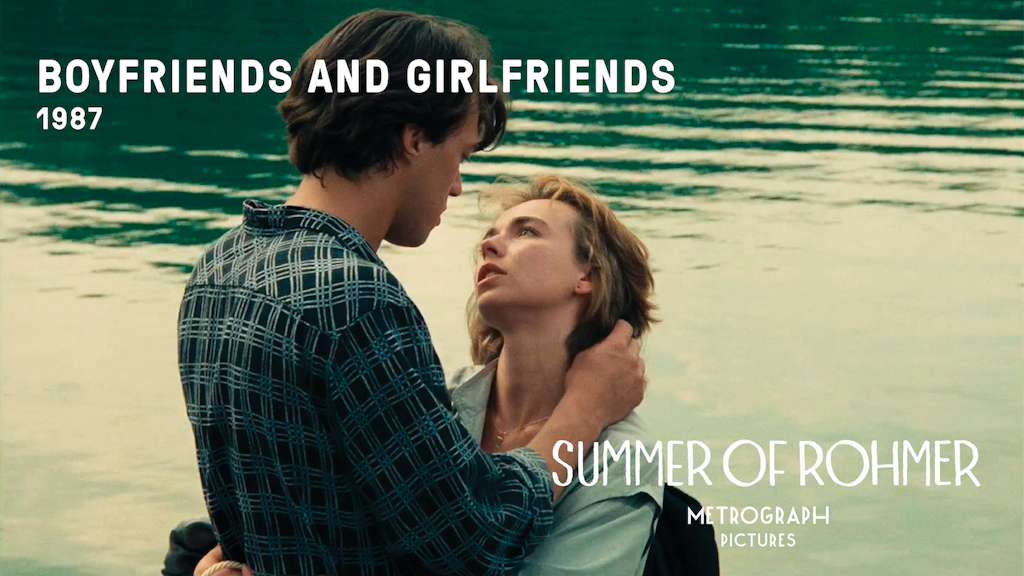 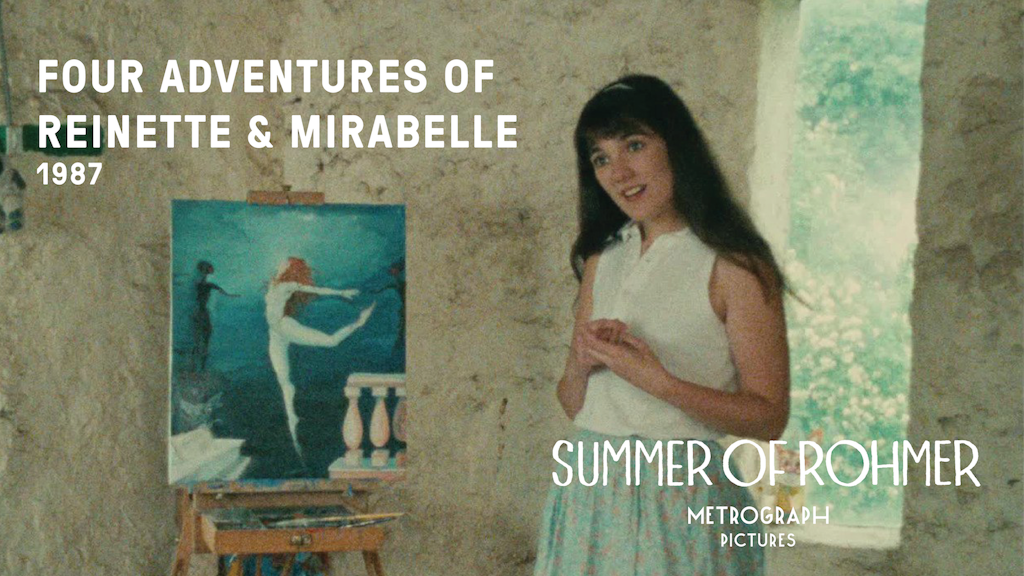 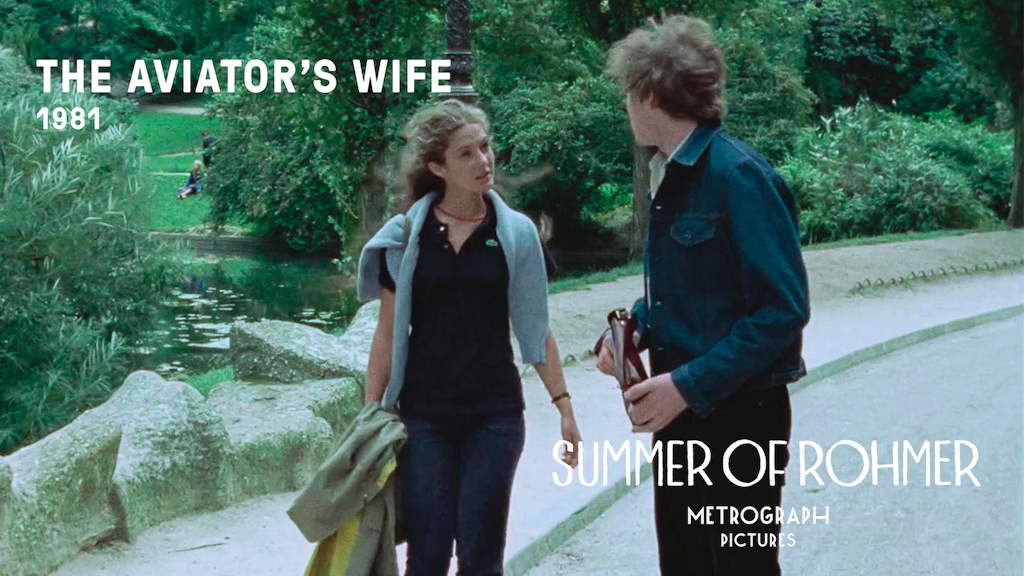