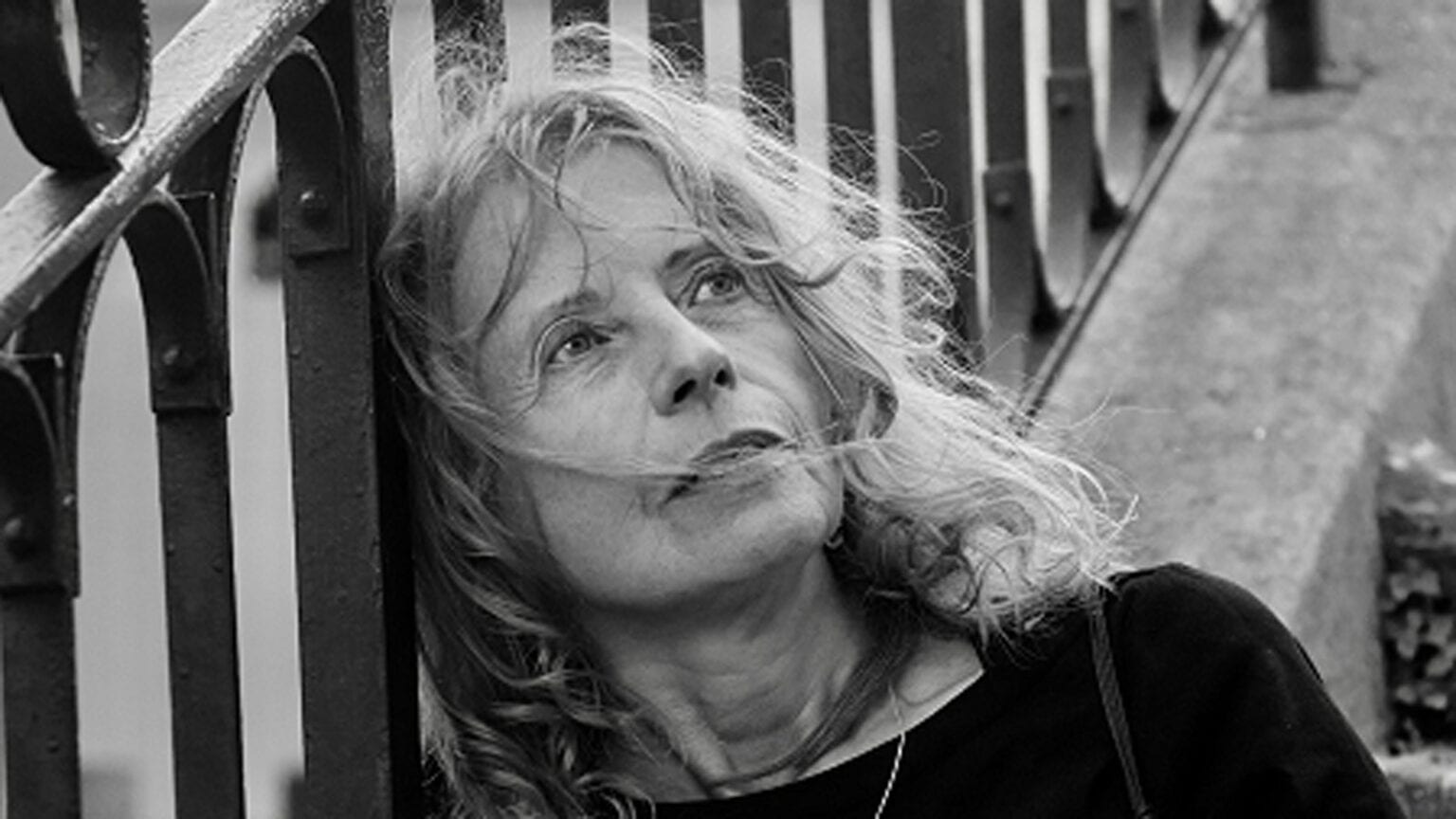 The actress who worked closely with Éric Rohmer, and made her own film in tribute to him, reminisces about the unforgettable roles he provided her with and the joys of their collaboration. 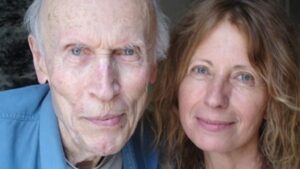 Marie Rivière’s indelible roles in The Aviator’s Wife (1981), Le Rayon Vert (1986), and Autumn Tale (1998) have made her into an icon of Éric Rohmer’s romantic cinema of soul-searching. While her physically eloquent performance as Anne in The Aviator’s Wife verges on tragedy, she conveys the introverted Delphine’s existential turmoil with dignified delicacy in the filmmaker’s venture into improvisation, Le Rayon Vert. The culmination of her collaboration with Rohmer, Autumn Tale—set against the backdrop of the southern French countryside—reveals the actress’s aptitude for wittiness through her nuanced portrayal of Isabelle, a married forty-something bookseller who serves as a matchmaker for her widowed best friend, played by Rohmer regular Béatrice Romand.

Rivière sat down with me to discuss her memories of working with the pioneering director a decade after he passed away.

ANNE, YOUR CHARACTER IN THE AVIATOR’S WIFE, VALUES HER SOLITUDE ABOVE ALL THINGS AND HAS NO INTENTION OF COMMITTING TO A RELATIONSHIP. DID THAT STRIKE YOU WHEN YOU FIRST READ THE SCRIPT?

This type of female character who refuses to get married was very modern for Éric Rohmer’s time, but he told me that he once knew someone like Anne. Éric thought that women could be very harsh with men. [Laughs]

IN FACT, WE SEE TWO CONTRASTING FACES OF ANNE IN HER INTERACTIONS WITH CHRISTIAN AND FRANÇOIS. SHE BEHAVES GENTLY AND AFFECTIONATELY TOWARD CHRISTIAN EVEN THOUGH HE BREAKS HER HEART, WHILE HER ATTITUDE TOWARD FRANÇOIS, HER DEVOTED NEW LOVER, COMES OFF AS CRUEL AND AGGRESSIVE. HOW DID YOU AND ROHMER EXPLORE THIS DUALITY THAT CHARACTERIZES ANNE?

There was no real character exploration with Éric. You just had to listen to what he said and figure out a way of incorporating it into yourself. Anne’s gentleness with the aviator [Christian, played by Mathieu Carrière] comes from the fact that she considers him to be her true love, which is ironic, given that he doesn’t want her anymore. His wife is expecting a child, so he can no longer have an affair, and this was, of course, a recurrent theme in Éric’s work. But it was quite difficult for me to be mean with Philippe Marlaud, who plays François, because he was a particularly sweet and kind young man.

HE DIED VERY TRAGICALLY THE FOLLOWING YEAR WHILE CAMPING…

Yes, his tent burned down because he forgot to blow out a candle before going to sleep, and he never got to see the finished film. 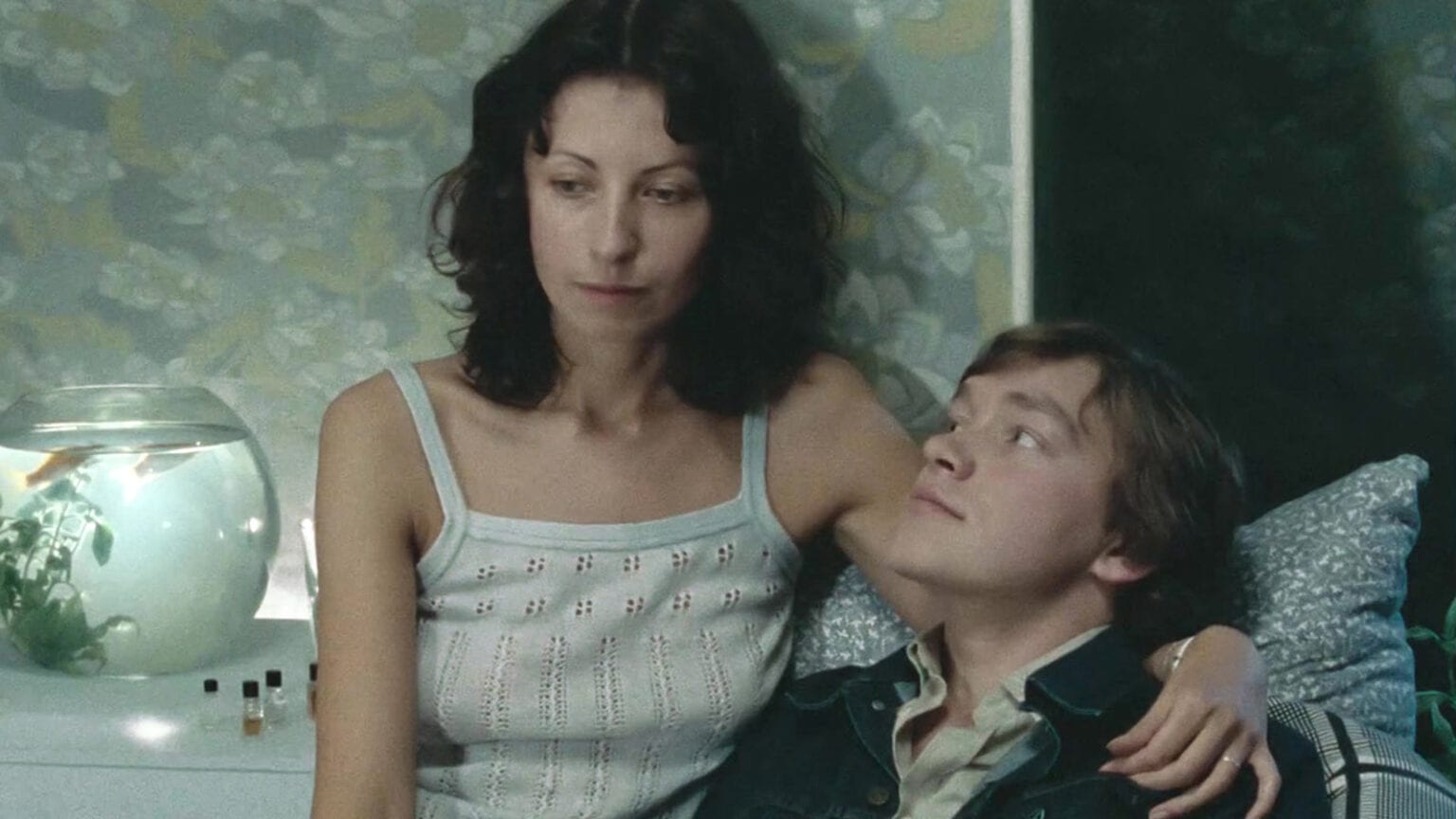 WHAT WAS THE PROCESS OF SHOOTING ANNE’S CATHARTIC FINAL CONFRONTATION WITH FRANÇOIS IN HER BEDROOM, WHICH PLAYS OUT IN LONG TAKES FOR OVER 20 MINUTES?

Although Éric liked his actors to move naturally, we had to block that scene very precisely before the shoot since the room was especially small. Éric asked me to express myself through gestures so that the audience wouldn’t be too bored when I spoke in bed. That allowed me to unleash emotions, and I might have made more gestures than necessary because I tried to breathe life into the rather demanding dialogue. Éric also wanted to make sure I could cry on demand since this was my first big role. So he made me rehearse a lot, and he was relieved to see that I cried at the same exact moment every time.

THE FILM’S MELANCHOLY CLOSING SONG, “PARIS M’A SÉDUIT [PARIS SEDUCED ME],” COMPOSED BY ROHMER HIMSELF AND PERFORMED BY ARIELLE DOMBASLE, OFFERS A POETIC WINDOW INTO ANNE’S INNER WORLD AND CONVEYS HER GROWING DISILLUSIONMENT WITH PARIS. DID THE LYRICS ALSO ECHO YOUR OWN EXPERIENCE OF LIVING IN PARIS AT THE TIME?

That song is really about Éric himself. My early years in Paris were very constructive, partly because I shared a place with my boyfriend. On the other hand, Éric had known poverty and hunger when he moved to Paris after the war, and he probably had difficulty making friends. The chambres de bonne that he lived in were very different from mine—he didn’t have a telephone and led a reclusive life. But, as the lyrics of the song say, he took pride in his solitude, and that was Éric’s strength of character. He recognized something positive even in a negative environment.

AS OPPOSED TO THE AVIATOR’S WIFE, IN WHICH THE ACTORS SPEAK WHILE IN MOTION, LE RAYON VERT, YOUR NEXT COLLABORATION WITH ROHMER, SHOWS CONVERSATIONS TAKING PLACE AROUND TABLES AND USES MOVEMENT FOR THE PURPOSE OF INTROSPECTION, AS WHEN YOUR CHARACTER, DELPHINE, STROLLS AROUND THE CITY OR THE COUNTRYSIDE.

On The Aviator’s Wife, I was confined both by the script and the space—I often found myself at the edge of the frame because of the room’s narrowness. So on Le Rayon Vert, it was very liberating to speak with my own words, and although I was seated, I could still make small gestures, like playing with my hair, which were enough to release emotions. But while the dialogue in Le Rayon Vert is a product of the actors’ improvisation, the film’s introspective mood stems directly from Éric. He reproduced those scenes in A Summer’s Tale [1996], in which Melvil Poupaud’s character walks around and says more or less the same things that I do in Le Rayon Vert.

“WITH ÉRIC, THERE WAS NO STOPWATCH. I THINK THAT WAS THE REASON WHY A LOT OF ACTORS WANTED TO WORK WITH HIM—HE GAVE THEM THE TIME TO EXIST AND EXPRESS THEMSELVES ON SCREEN WITHOUT BEING IN A HURRY.”

WOULD ROHMER SOMETIMES INTERVENE IN LE RAYON VERT’S IMPROVISED SCENES, OR DID HE ENCOURAGE EVERYONE TO MAINTAIN THEIR OWN RHYTHM OF SPEECH?

Although Éric liked to hear the music of his own writing, he never intervened on Le Rayon Vert, since the words didn’t belong to him. One of his intentions with Le Rayon Vert was actually to demonstrate that people said long sentences in real life, rather than short, telegraphic ones like those we hear on TV. Some directors bring a stopwatch on set, and the actors skim the fat off sentences to make sure the scene doesn’t last longer than it’s supposed to. With Éric, there was no stopwatch—we took our time with the lines, and yet Éric’s movies are not long. I think that was the reason why a lot of actors wanted to work with him—he gave them the time to exist and express themselves on screen without being in a hurry to say the words or proceed to the next action.

MUCH OF LE RAYON VERT RESTS ON YOUR SHOULDERS, AND I WONDER IF BEING SURROUNDED BY A FEMALE CREW COMFORTED YOU AND MADE IT EASIER FOR YOU TO ABANDON YOURSELF TO THE CAMERA.

I’m very grateful to the cinematographer, Sophie Maintigneux, but also to Claudine Nougaret [the sound mixer] and Françoise Etchegaray [Rohmer’s assistant and later producer], who supported me in a very delicate and harmonious way throughout the shoot. That being said, it was a silent aid since Éric had forbidden them to talk to me so I could experience my character’s solitude firsthand. [Laughs] But I think a male crew can also make you feel comfortable, as was the case for The Aviator’s Wife, and my main helper on Le Rayon Vert was none other than Éric, who always stood right behind the camera and often framed the shots himself.

AUTUMN TALE MARKED A REUNION FOR YOU WITH BÉATRICE ROMAND, ONE OF YOUR CO-STARS IN LE RAYON VERT, A DECADE LATER, BUT THIS TIME YOU TWO HAD SWITCHED ROLES: SHE PLAYS THE SOCIALLY ISOLATED SINGLE WOMAN, WHILE YOU PORTRAY HER SUPPORTIVE AND ADVENTUROUS BEST FRIEND.

Éric initially offered me Béatrice’s part, but then he thought that a change from playing a lonely and sad woman would do me good. [Laughs] Autumn Tale’s story appealed to me a lot because I was living in a small town at the time, and I was quite bored with my life. I would have been delighted to have a friend around and meet an attractive man in a café, as my character, Isabelle, does. So the film was like Éric’s gift to me, and what I loved about it was the ambiguity of Isabelle, who acts like she was doing a good deed for her friend by finding her a man, when, in fact, she just wants to have some fun herself. Of course, Éric didn’t want me to make this explicit, but it was completely palpable in my exchanges with Alain Libolt [Gérald], such as when I tell him that it was risky for me to go on those dates because I could have fallen in love with him. That’s the confession of a married woman who gets a grip on herself. 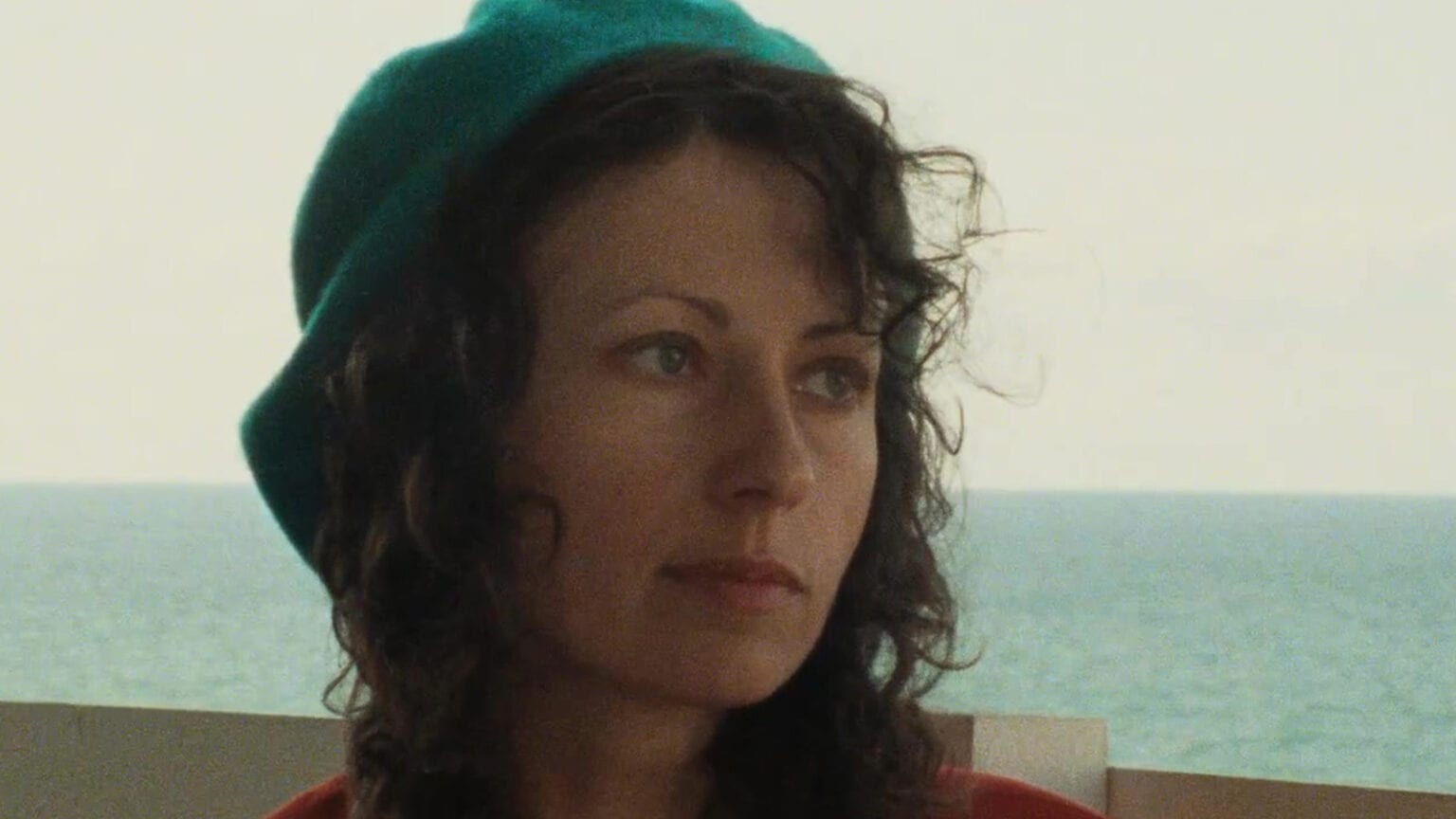 THE SENSE THAT ISABELLE GETS CAUGHT IN HER OWN GAME IS CONFIRMED BY THE MOVIE’S ENDING, WHEN HER CHEERFULNESS AS SHE DANCES WITH HER HUSBAND AT HER DAUGHTER’S WEDDING MORPHS INTO SADNESS AFTER THE CREDITS ARE INTRODUCED. DID ROHMER ASK YOU TO ADD THAT EMOTIONAL NUANCE, OR WAS IT YOUR INITIATIVE?

Éric wanted me to laugh all the time and be happy, but that didn’t seem right to me. I mean, we saw Isabelle getting bored stiff with her husband earlier in the film, so I wanted to emphasize her disappointment at not having had a fling with Gérald. And it was Mary Stephen, the editor, who insisted to Éric that he keep that shot, and he did, but he put the credits over it to avoid compromising the moral of the story.

IT’S UNUSUAL TO COME ACROSS SUCH A REVELATION IN THE LAST 20 SECONDS OF A FILM. MOST VIEWERS OFTEN LEAVE THE THEATER BY THEN.

Yes. There’s a wonderful illustrator called Mirion Malle, who did a comic book about Éric’s movies, and she actually depicts such a situation—a man leaves the theater before the end of Autumn Tale and is held back by the comic book’s narrator, who tells him he’s about to miss the best moment.

IN YOUR DOCUMENTARY, IN THE COMPANY OF ÉRIC ROHMER [2010], YOUR QUEST TO CAPTURE A SYMBOLIC IMAGE IN HONOR OF THE DIRECTOR REACHES ITS COMPLETION ALONG THE BANKS OF THE SEINE, WHERE ROHMER’S FIRST FEATURE, THE SIGN OF LEO [1962], WAS SHOT.

I intended that quest as a gesture of recognition toward Éric for the happiness he filled my life with. I don’t know if he understood it, and the images I shot with my small digital camera are certainly not equal to his. But when I saw the sunset under the bridge, I thought that I needed to share it with him, so I set the camera down and hoped that I would show up in the frame, which I luckily did. I’m very proud of that image because the light on the Seine was golden that day, and it reminded me of The Sign of Leo, a magnificent film brimming with natural light. • 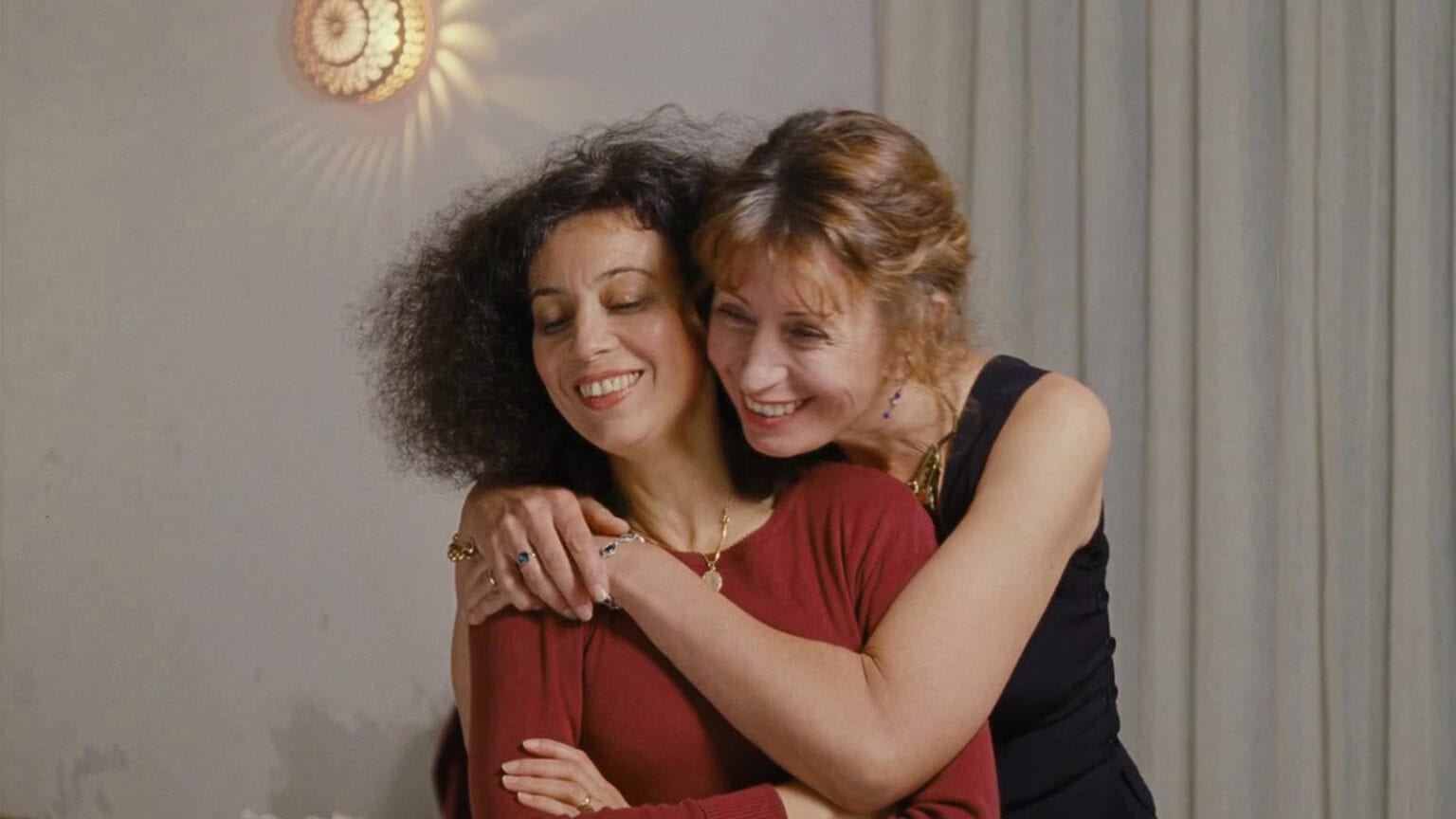