A guided cinematic tour through the hugely diverse Queens neighborhood, which provided the focus for Frederick Wiseman’s panoramic 2015 documentary, In Jackson Heights.

The birthplace of Susan Sarandon, Lucy Liu, Don Rickles, and Mercedes Ruehl and one-time home to Montgomery Clift, John Leguizamo, Charlie Chaplin, and Douglas Fairbanks, Jackson Heights may not exactly be a household geographical name outside of New York, but it holds a small but significant place in screen history.

Frederick Wiseman’s heartening three-plus-hour documentary ode to the Queens neighborhood, In Jackson Heights, helped shine a spotlight on the fantastically diverse locale that has also received its share of news-time these past months for being part of an area hit particularly hard during the COVID-19 outbreak. But while Wiseman’s 2015 film may offer the most intensive screen time given to the area to date, it has been making appearances in movies for over 50 years.

In 1947, the Jules Dassin and his crew on The Naked City made NYC their shooting playground, using over 100 locations, including the Williamsburg Bridge for its exciting police-chase finale. Cinematographer William H. Daniels won an Oscar for his brilliant work capturing the city in the unusual documentary-style film noir tinged with Italian neorealism. Jackson Heights makes a brief cameo as the place Detective Jimmy Halloran (Don Taylor), calls home, at 86-17 30th Avenue. 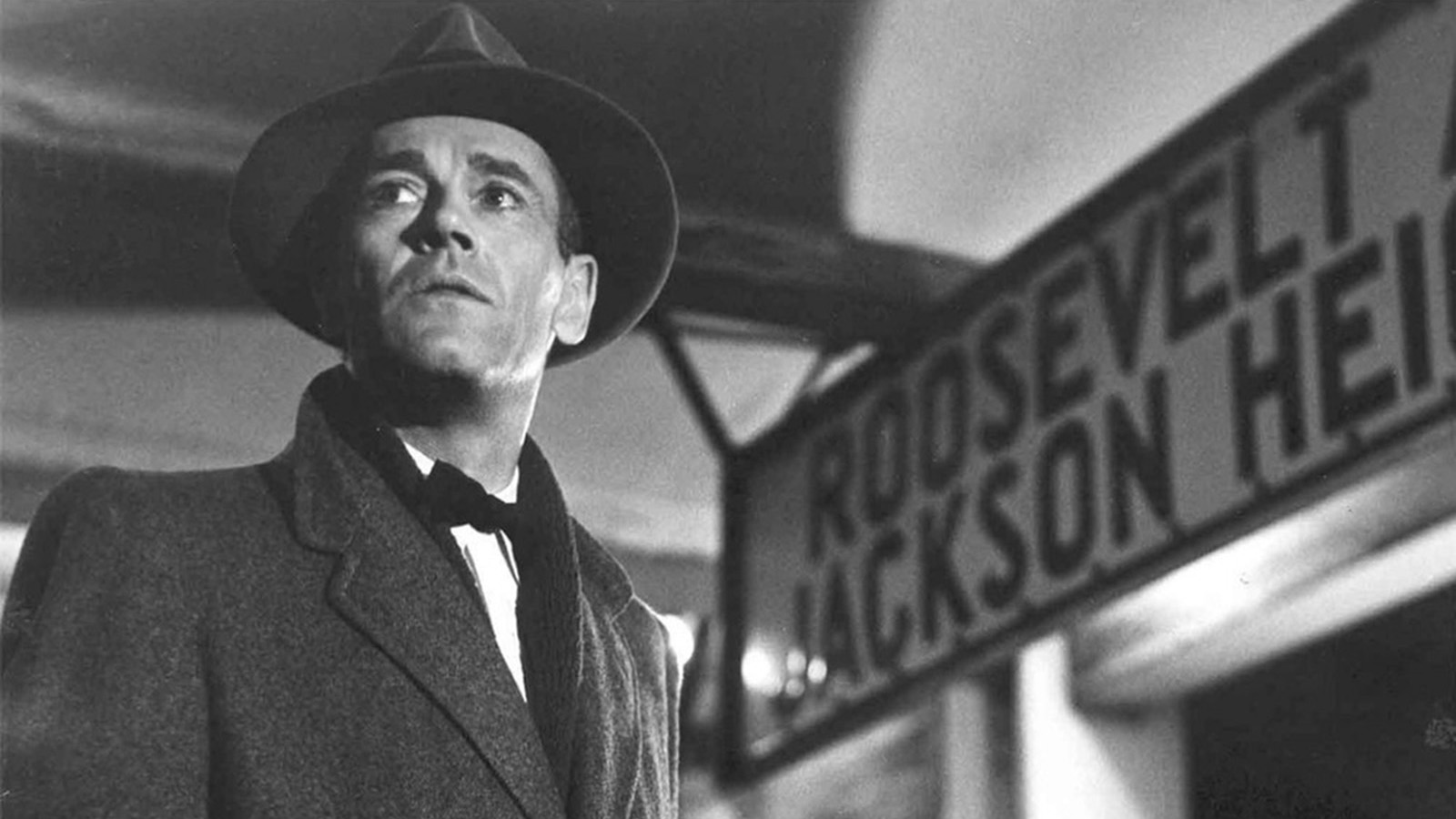 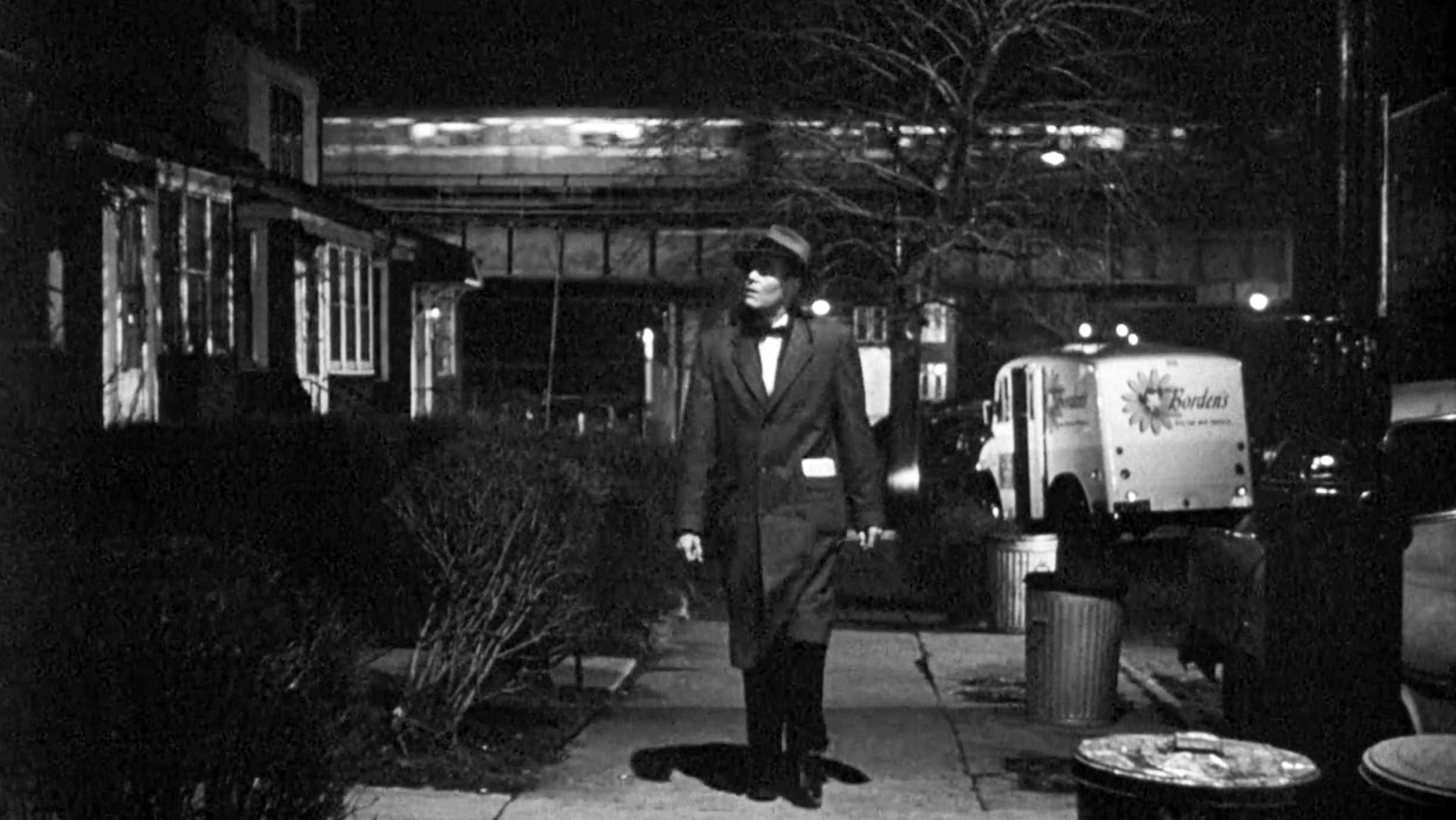 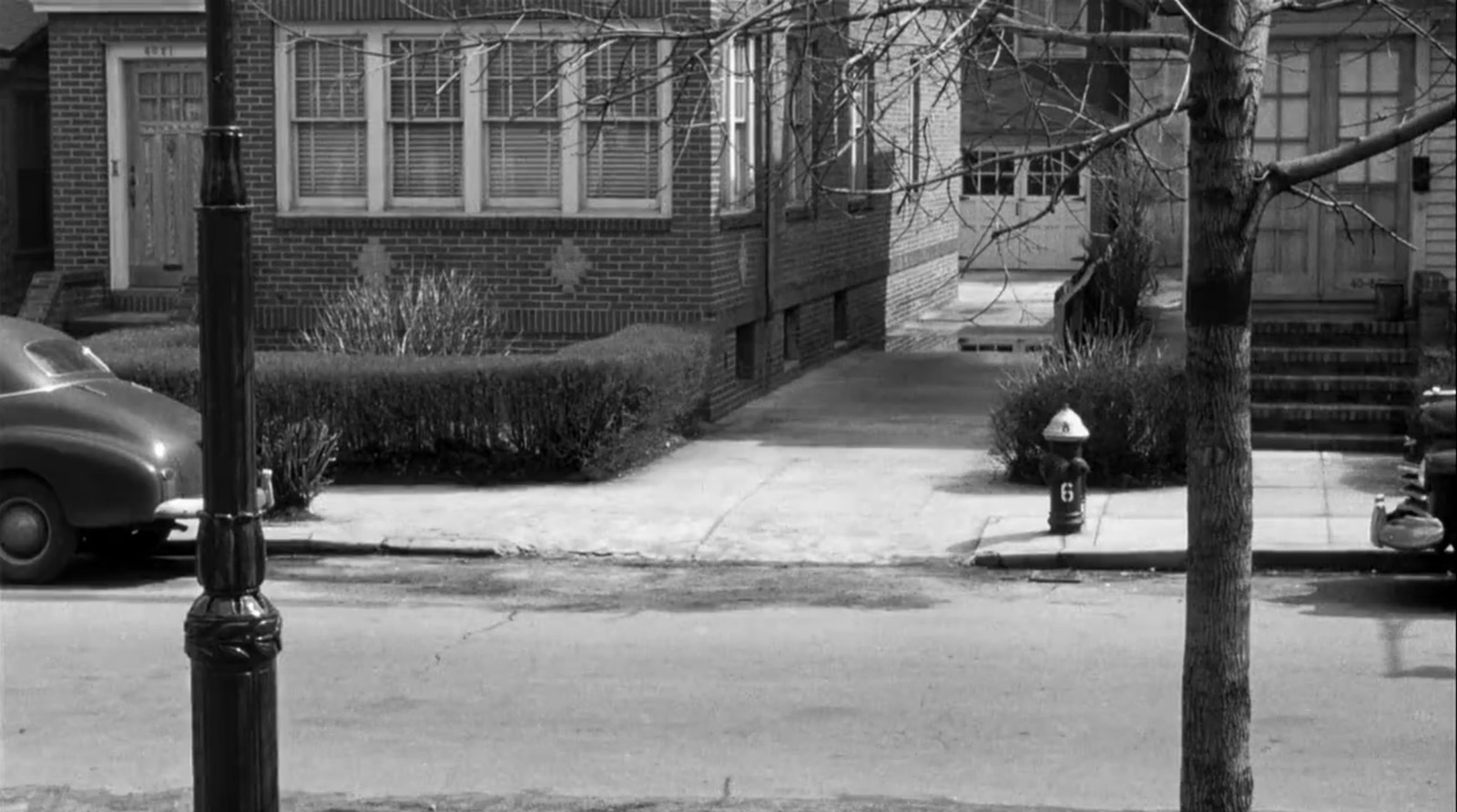 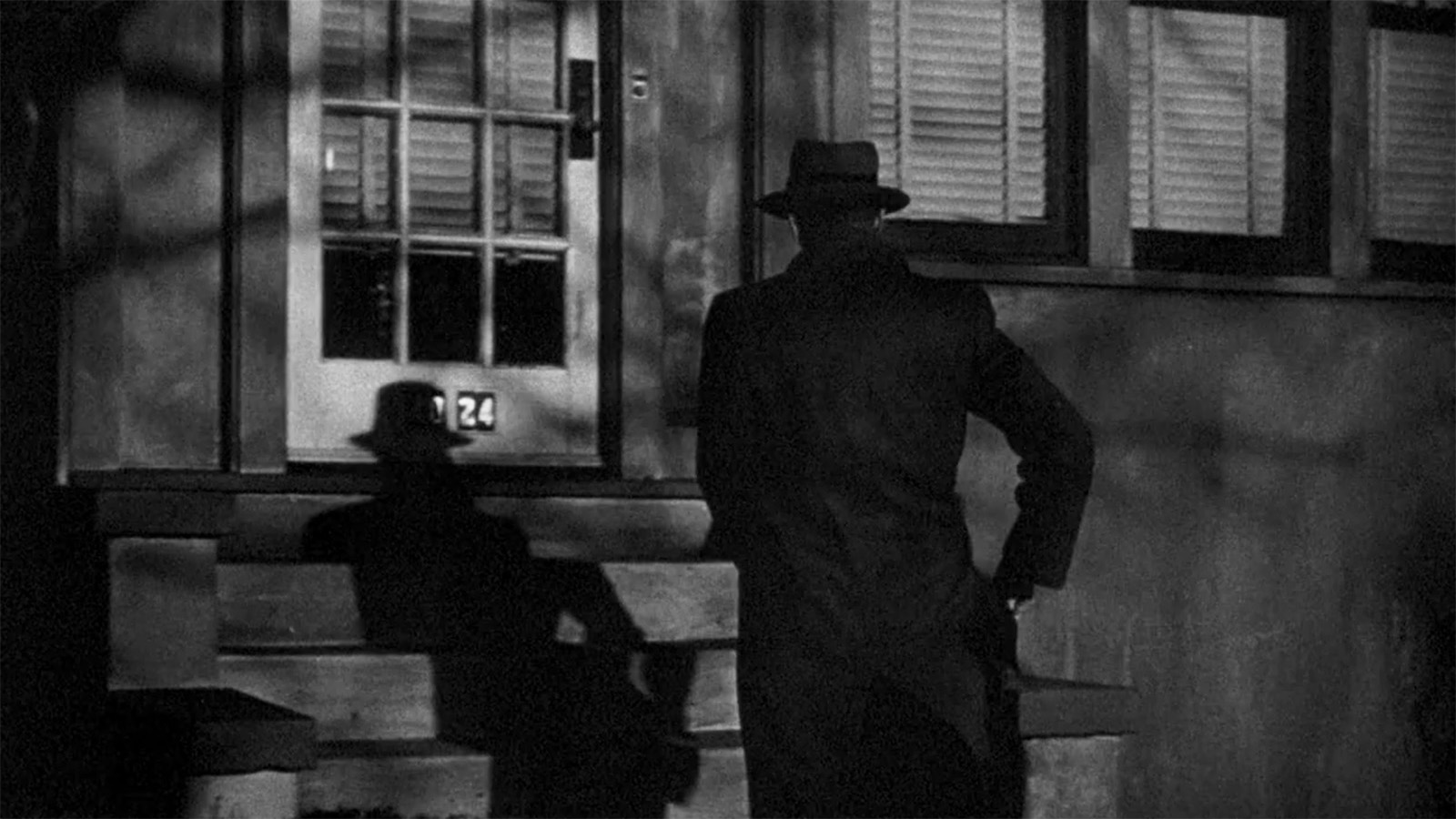 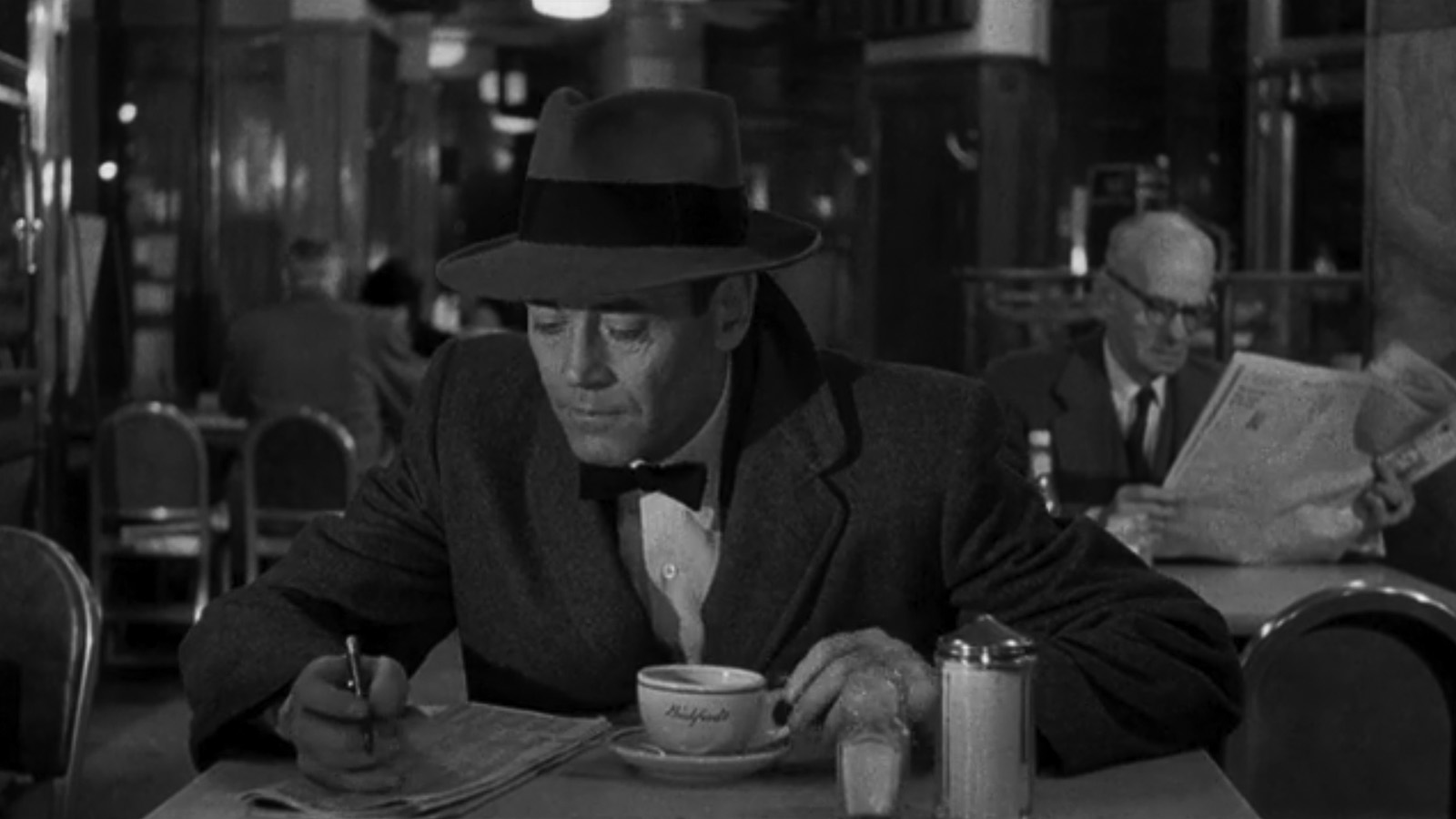 The neighborhood was featured way more prominently in Alfred Hitchcock’s 1956 The Wrong Man. The movie poster claimed that “every twist and turn of it is true!” and indeed it was the first time the director turned to real-life as the basis for one of his films. And for the sake of authenticity, most of the its interiors and exteriors were shot on location in Jackson Heights, the place where Henry Fonda’s character Manny Balestrero resides with his wife and two children, at 40-24 78th Street. He is a jazz bass player at NYC’s Stork Club, as honest as they come, who becomes trapped in a cruel cycle of injustice when he’s falsely accused of armed robbery. So not only do we see Jackson Heights, but we hear it said multiple times as Manny is repeatedly asked to state his name and address while being questioned by lawyers and the police. His plight is a storied one in his town, and in 2014, the border intersection of Woodside, Elmhurst, and Jackson Heights at 73rd St. and 41st Avenue was re-named Manny “The Wrong Man” Balestrero Way in his honor.

Following Hitchcock’s underappreciated masterpiece, it would take nearly 50 years for the neighborhood to be given a screen role as large. In Joshua Marston’s Maria Full of Grace (2004), a 17-year-old girl in Colombia, who’s just discovered she’s pregnant, spends the sometimes unbearably intense beginning of the film preparing for the dangerous mission of transporting heroin capsules to New York, a city she arrives into just about an hour into the film. And once there, much of the action takes place on the streets and in local businesses of Jackson Heights. As she wanders the neighborhood and buys obleas (wafers) from local vendors, we are seeing it from the perspective of her fresh eyes, a heartbreaking experience thanks to the striking debut performance of Catalina Sandino Moreno as Maria. 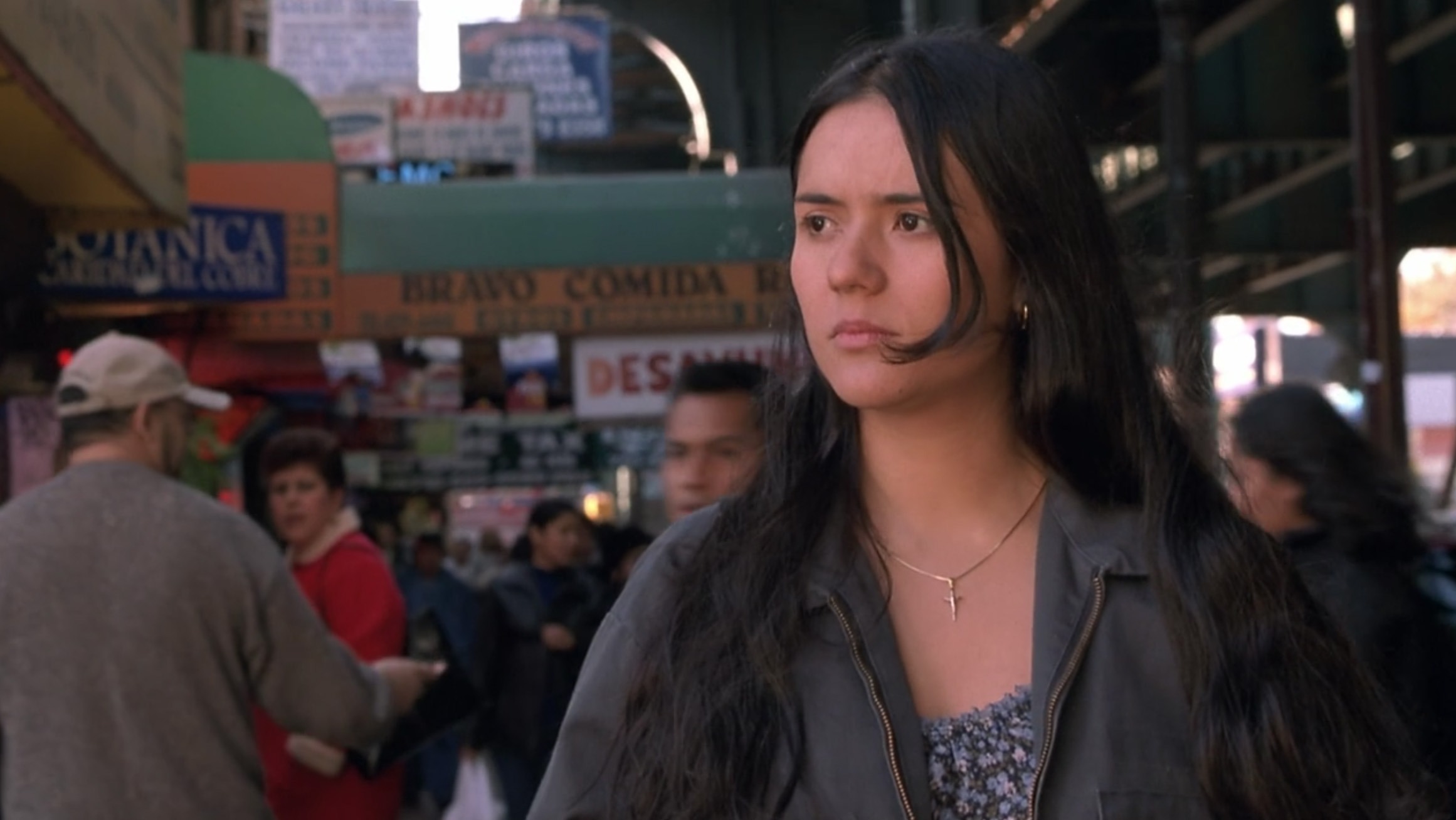 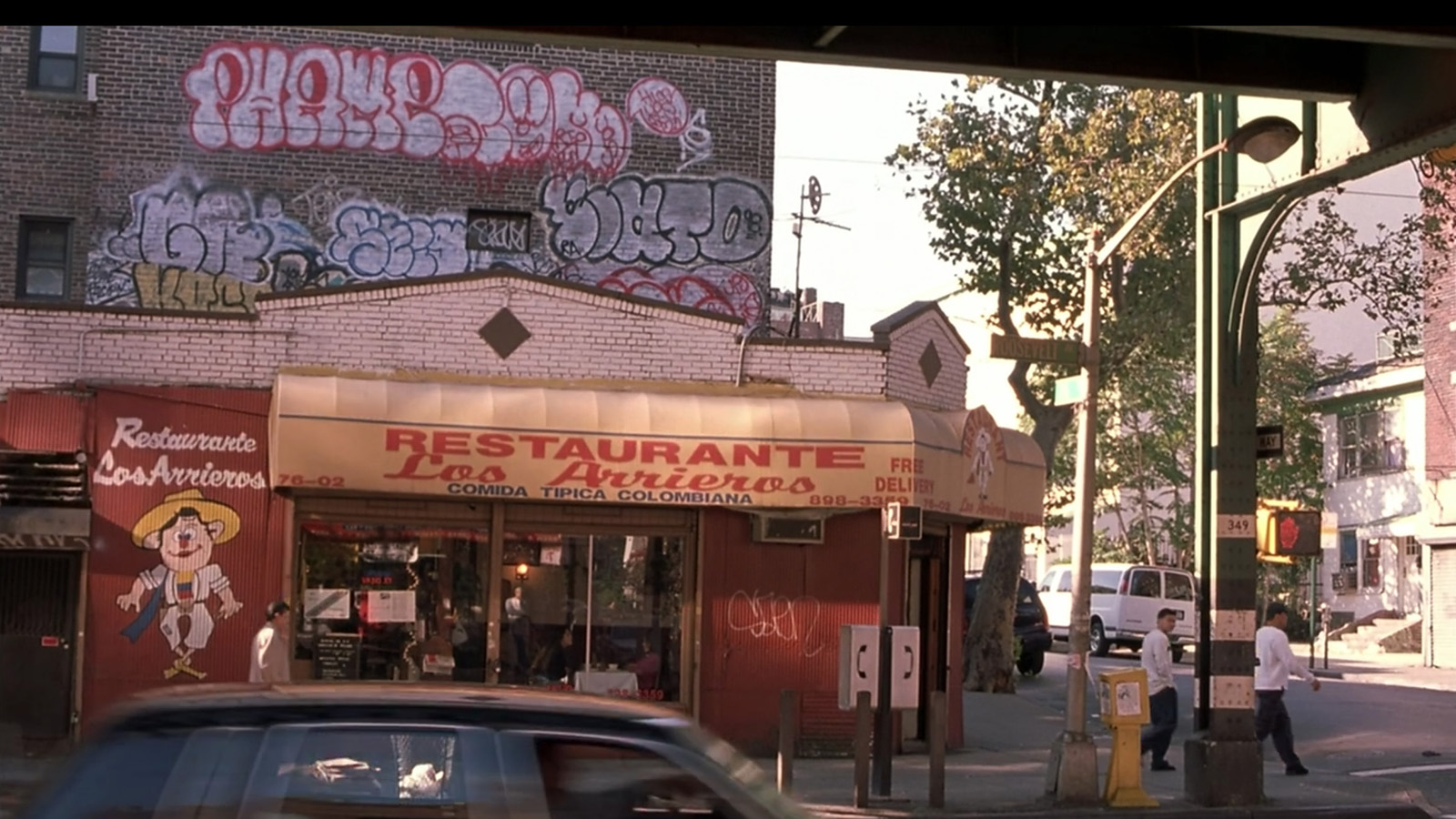 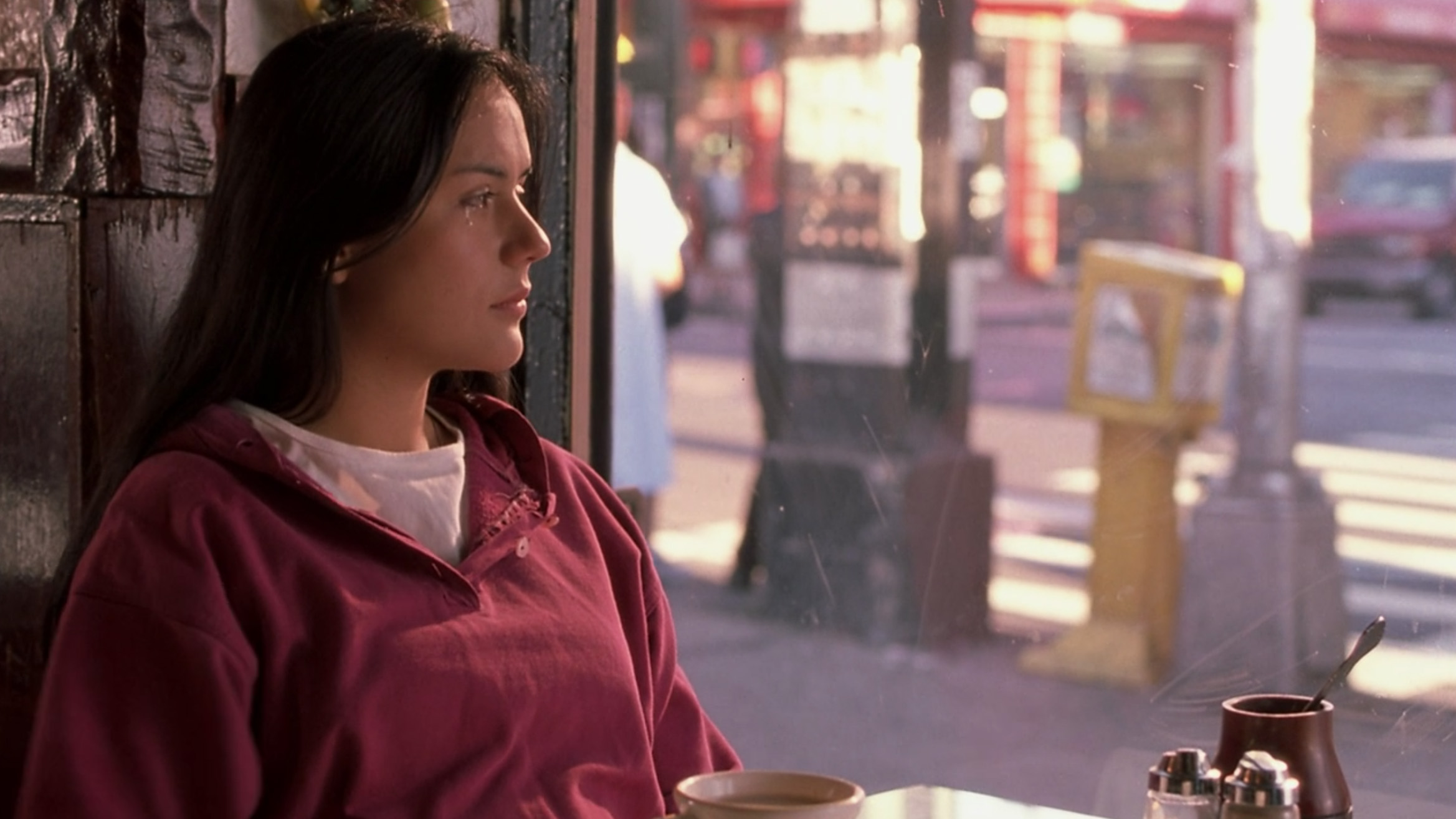 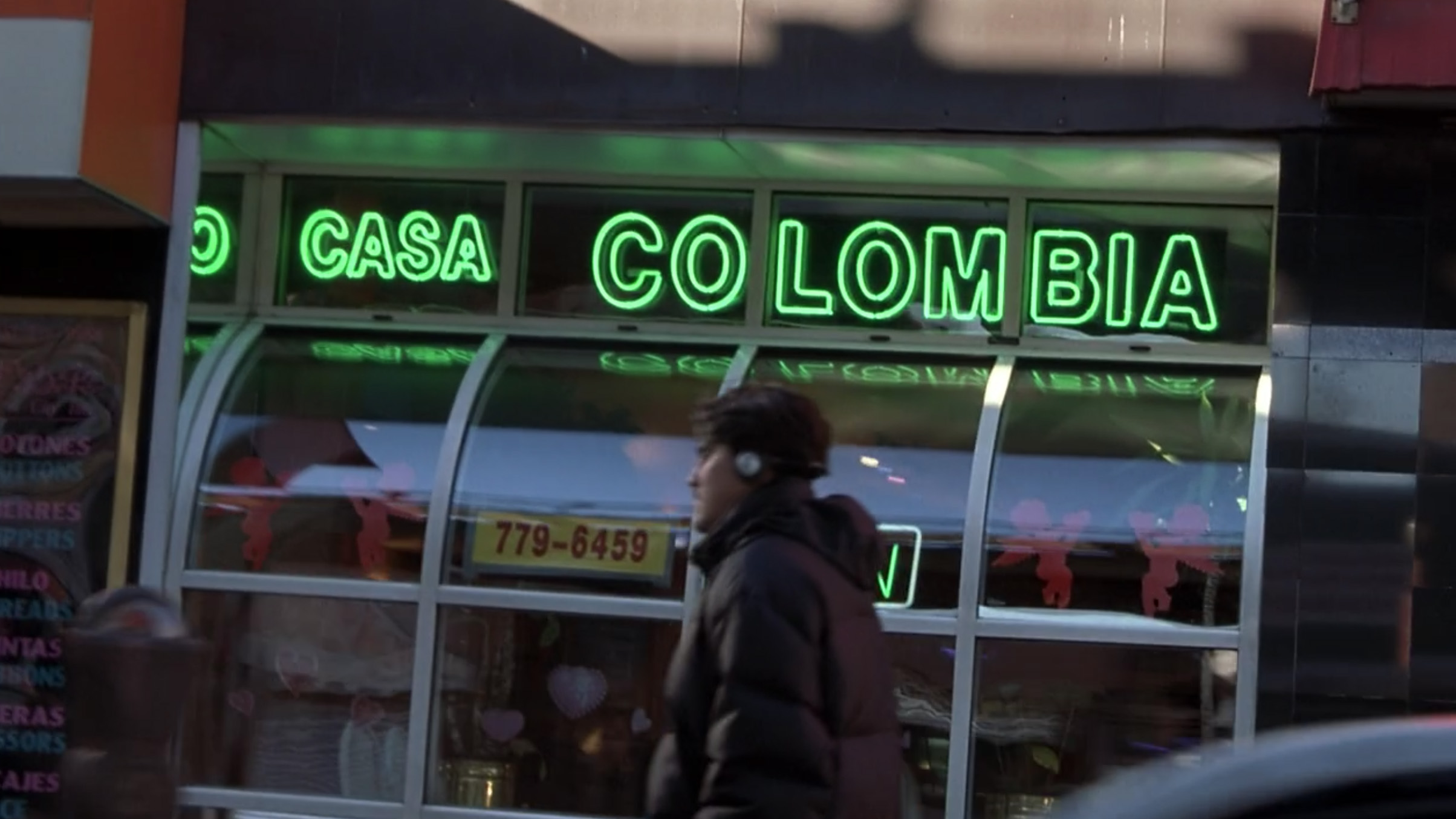 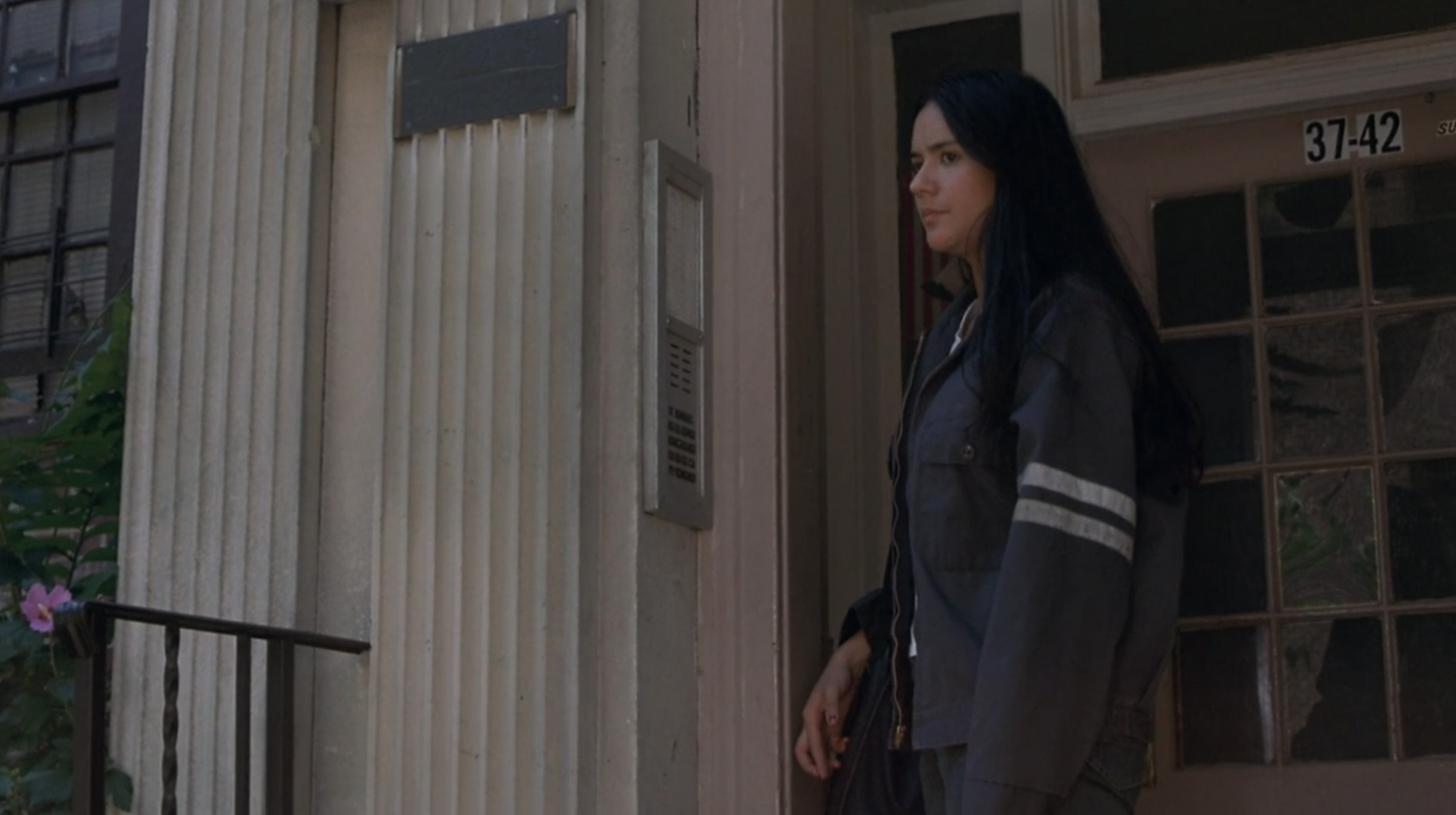 Other filmmakers of note—or ones we’d like to erase—who have used Jackson Heights as a backdrop include Bryan Singer’s The Usual Suspects (1995), filmed around 34th Avenue and 82nd Street, James Gray’s We Own the Night (2007), filmed between 32nd Avenue and 31st Avenue on 84th Street, and Sydney Pollack’s Random Hearts (1999), with 35th Avenue between 76th and 77th Streets standing in for Washington DC and Rhode Island exteriors. Ingrid Bergman’s character Stephanie Dickinson in Gene Saks’s Cactus Flower (1969) lives in Jackson Heights, but while the film features many other NYC locations, the neighborhood doesn’t actually make a screen appearance.

It does pop up, though, in Goodfellas. The first scene in which Henry Hill transitions from young thug to adult criminal, now in the form of Ray Liotta, he stands in a parking lot in front of the magnificent neon sign of the Air Line Diner with Tommy DeVito (Joe Pesci) as he relates in voiceover their plans to rob the Idlewild Airport (now JFK). The diner still exists at 39-35 Astoria Boulevard, though it’s now one of three locations of Jackson Hole, the much-loved New York City burger joint. The restaurant’s website plays up the Goodfellas connection, featuring an image of Liotta and Robert De Niro sitting together in a booth, though that scene was actually shot at Clinton Diner—later renamed GoodFellas Diner!—which was destroyed in a fire in 2018.

What’s most curious about the history of the neighborhood’s cinematic presence is that for having such wide-ranging amounts of races and religions, it comes off, with the exception of Maria Full of Grace, quite white—but it is the movies after all. For a fuller portrayal, turn to Wiseman. •