I Love You But I’ve Chosen Darkness

The agony and ecstasy of growing up within the darkened halls
of movie theaters. 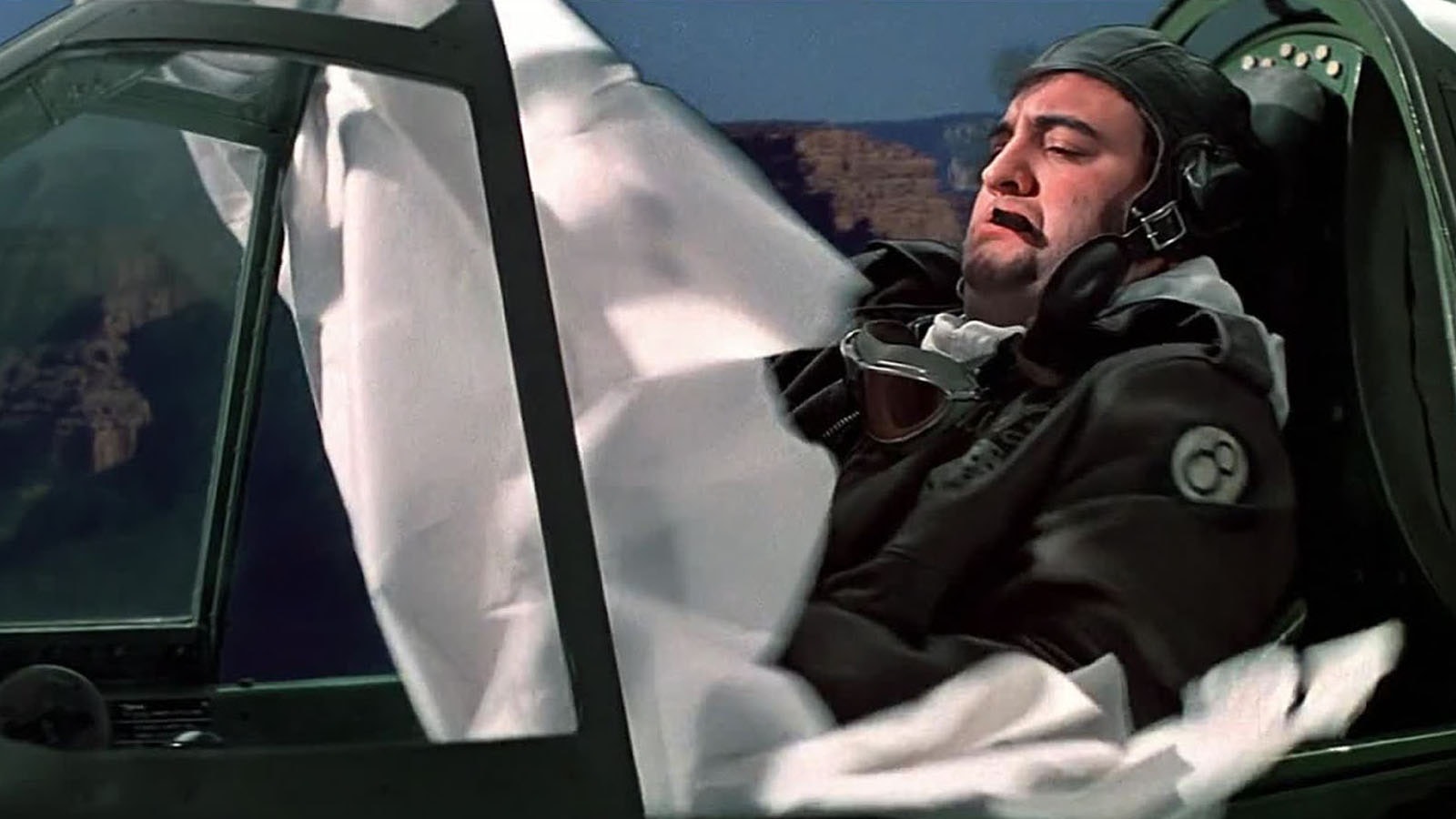 When I was very young, I was afraid of the dark. Then it became the only place I ever felt truly comfortable, or ever wanted to be.

I grew up in the 1970s, the faded Kodachrome decade that heard the last-day gasps of the drive-in and the first lung-clearing cries of the home-entertainment revolution. I have vivid memories of watching John Belushi pilot a P-40E in 1941 from our station wagon’s front window while sneaking extended peeks of forbidden-fruit carsploitation and candy-striper flicks out the back. (There’s an apocryphal family anecdote that my parents took me to see The Godfather at a drive-in when I was a baby and, once the first strains of Nino Rota’s opening theme blared out the car speaker, I stopped crying and sat quietly for the next few hours, falling asleep the minute the end credits rolled.) I also remember standing in a shopping mall’s record store, staring rapturously at a display kiosk that kept showing the same “kooky” trailer for a suicide-obsessed young man named Harold and his sunflower-sporting lady love, Maude, in an endless loop. The catch was, you could apparently buy this film, to watch ad infinitum and revisit at will, like a book or side four of Led Zeppelin’s Physical Graffiti. The game, she had changed.

even when it was just you and the empty seats and the screen, you were never really alone in a movie theater.

But movie theaters were where my formative, sentimental education as a cinephile truly began. That’s where the idea that going to the movies was not just something to do with your friends on a hot summer afternoon, when California smog alerts made suburban pick-up soccer games impossible. They could be passports, portals, time-travel machines, escape hatches, history lessons, here-there-be-dragons cautionary tales. They could be cryptic peeks into adulthood, especially the ones that my mom, my first serious serial moviegoing companion, took me to during our regular Thursday double-feature matinee hang-outs. (What is a prostitute and why is she named Bunny? Why is the guy from M*A*S*H bickering with the woman from Coming Home? What, exactly, is a “California Suite”? Shhh, it’ll all be explained later.) They could be wormholes to fall into and looking-glasses to go through. And they could be places where you stepped into other lives, ones lived by people with names like Apu and Antoine Doinel, who seemed different than you but very much the same, something you experienced in a crowd but also, blissfully, all by yourself, in the dark.

The “by yourself” part was key. While many of my more memorable screenings involved companions and cohorts—seeing Barbarella on a second date with the woman I’d eventually marry; catching a revival of Andrei Rublev with a friend as an elderly Russian lady noisily ate stinky borscht several seats down, turning it into an impromptu Sensurround event—the epiphanies tended to happen solo. There’s something about being on your own in a theater, strangers dotted around you in loose pointillist fashion, and the quiet thrill of shared but unspoken expectation as lights go down and a screen lights up. It might be one-out-of-a-gajillion popcorn-scented rooms inside a Googleplex, or a repertory house whose signature musty odor seems to be emanating from the scratched 35mm black-and-white print itself. (O San Francisco’s Roxie Theater funk! My Proustian Madeline!) It might be Duck Soup in the daytime or Eraserhead at midnight. But like an iris-in shot, the experience narrows from big-picture to something intimate, the rest of it all blacked out, just you and the film itself. “You’re never alone with the radio on,” Jonathan Richman sang. And even when it was just you and the empty seats and the screen, you were never really alone in a movie theater.

Like any relationship, things could turn sour or codependent. (Read Patton Oswalt’s celluloid-addict memoir Silver Screen Fiend and mark it as Exhibit A. See also: the title of this piece.) But in those darkened rooms, you could take up the invitation to play cultural tourist or have a light shined on those interior spaces in your psyche, the corners you may not have even known were there, and walk out an entirely different person than you were when you walked in. You viewed the world as a different place, and you viewed your place in it differently. Those cell-altering moments require a space—if not a room of one’s own, then a place where immersion and interaction between art and a moviegoer can take place. And when you think back to where those perspective shifts took place, it was impossible not to fetishize the temples a bit, or a lot. Those places will always be sacred to you. Just saying the names—the Camera 3, the Towne, the Castro Theater, Film Forum—could be enough to induce genuflecting. That’s where the darkness welcomed you in, and showed you secrets and the world, then left you with an open invitation to return.

A postscript: Upon winning the professional lottery and having the chance to write about movies for a living, there was an ever-present fear that the darkness would no longer be a window but a workplace, to be clocked in to and clocked out of. One day, assigned to cover a movie I’d been chasing down for decades, I took the subway from my office in Manhattan into Brooklyn. The then-Artistic Director for BAMcinématek, Florence Almozini, met me at the door; upon hearing that I’d never seen the movie in question, she told me she had to stick around to share in the experience. So we walked into the large theater at BAM, she sat discreetly behind me and, signaling to the projectionist, started up Celine and Julie Go Boating.

We sat there, her for the nth time and me for the first, watching as Juliet Berto and Dominique Labourier got into misadventures. Then the women on screen slip lozenges into their mouth, which causes them to enter a house where a melodrama keeps playing, gradually revealing itself and gradually inviting our two heroines to become active participants. It is the most potent metaphor for moviegoing I’ve ever seen. It’s the closest thing I have to a “favorite” movie; to this day, it remains the single most enjoyable screening experience I’ve ever had. And at the end, as Jacques Rivette’s existential joke bids us adieu with its full-circle, cinema du feline punchline, Florence giggling and myself slackjawed, the theater remained pitch black for another 30 seconds. I no longer worried that the movie theaters would cease to be sanctum sanctorums. I did not want to spit the lozenge out. I did not want the darkness to lift. •

David Fear is a critic and the Film/TV editor for Rolling Stone.