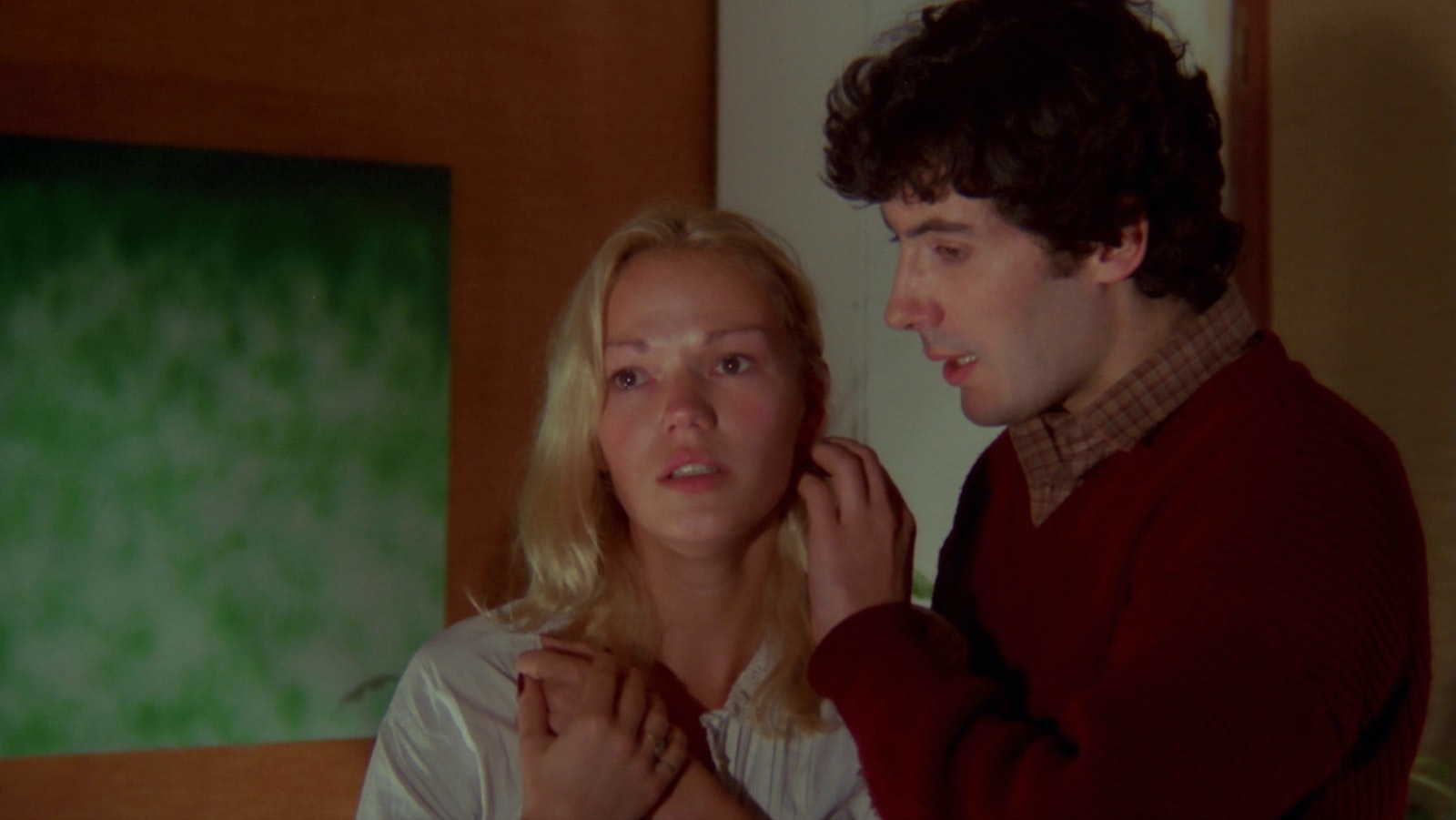 A Touch of Skin

Night of the Hunted is available to stream At Home through January 2. 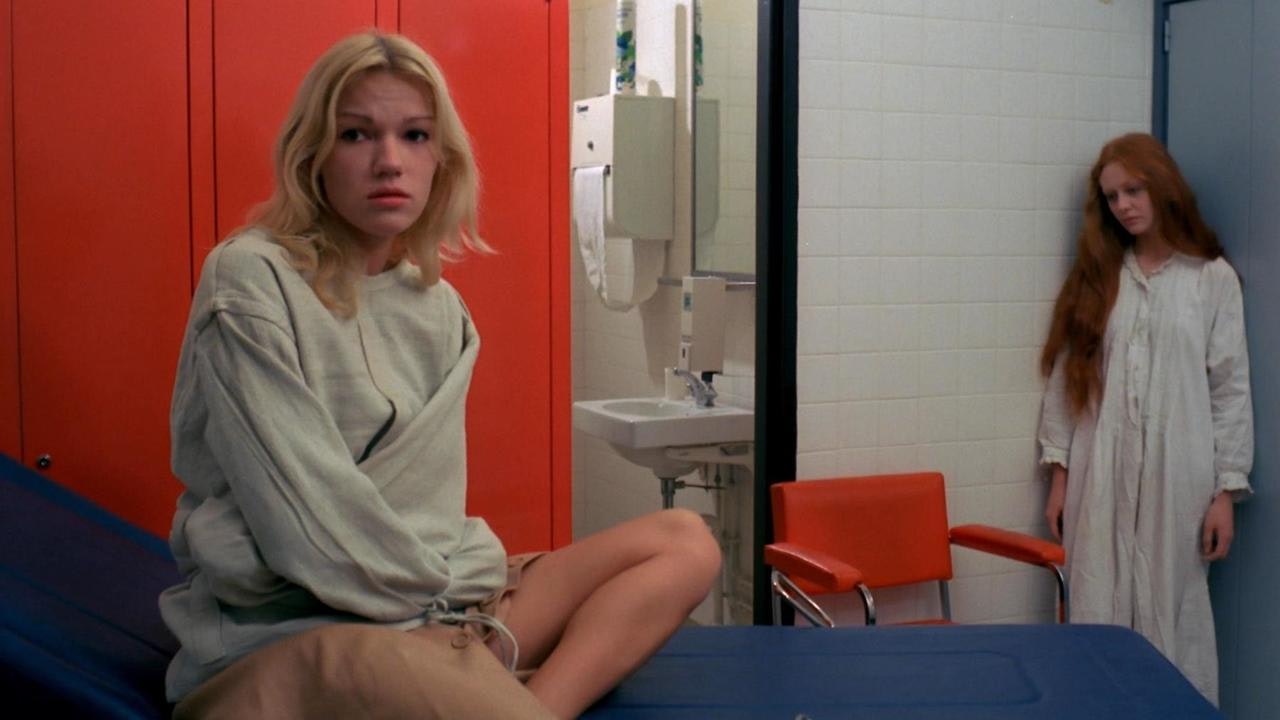 The Night of the Hunted (1980) is a profoundly clumsy movie, and a movie profound in each of its slips. Swapping his customary gloomy Normandy beaches and crumbling châteaux for a frigid psychiatric institution on the city limits of Paris, director Jean Rollin here compels his actors to speak in odd rhythms with irregular pauses, and to wobble like unsure children with each step. A viewer might write off these tics, along with the film’s frequent continuity errors, as marks of its low budget and tight schedule—it was reportedly shot in ten days—but that would be to overlook its dreamy intensity: rather than aim for verisimilitude to please the rational mind, the actors’ jagged enunciation and uncomfortable movements resonate on the level of the body.

The primary body under scrutiny is that of Elisabeth (Rollin favorite Brigitte Lahaie), a fugitive from a clinic whose patients suffer from an extreme form of memory loss, which seems to be wrought by a combination of nuclear radiation and medical malpractice. We first see her on a pitch-black night, lit by the headlights of a car driven by a stranger, Robert (Vincent Gardère); screaming and disoriented, she staggers further down a back road, the flashes of her flimsy white cotton night robe the only discernable detail. The image functions both as guerrilla realism—just a camera, a car, and a girl—and as a visual metaphor for Elisabeth’s damaged mental state, with the present moment illuminated but forever threatened by a surrounding void. Rollin strikes this dual register continually, communicating via careful if bare-bones compositions the abject, existential plights of his characters.

Robert emerges from the car; she clings to him, and they drive back to his apartment, where Elisabeth and Robert promptly get down to it, backed by a smooth organ tune that evokes both the two-dozen-or-so gothic tales and the 20-plus pornographic films that Rollin made across his 40-year career. Sex features heavily in all of the movies—hardcore scenes were all but required in genre flicks at the time—but Rollin consistently invents moving ways to entwine the act. Lahaie was primarily an adult actress, and Elisabeth’s mysterious condition both satisfies and complicates her portrayal of an idealized sexual object: unable to remember her past, she becomes a virgin every night. The sex is heavily stylized—leafy plants jut into the frame, Lahaie’s blond hair mingles with a white shag carpet—but emotionally heightened by Elisabeth’s desperate attempts to ink this moment into her long-term memory. “I will never forget you. It’s impossible,” she whispers. “I want to die with each breath so I will never forget you.” The lines could be lifted from a porno or a ’40s melodrama, but Lahaie’s performance exists at an uneasy autonomy from all known cliché—her eyes switch between a lusty locked stare with Robert and a glazed-over look of fear directed off-screen.

Without mental permanence, a fierce grab of the wrist comes to signify total trust, and a door slammed shut erases a relationship for good.

When Robert leaves for work, Elisabeth inevitably watches those good memories wash away. Thanks to the sinister Dr. Frances (Bernard Papineau) she winds up back at the institution, where the squalid darkness of the early scenes is washed out by the fluorescent, overhead lighting inside the black-glass tower—an office building, situated in the business district of La Défense, that Rollin shot in at night. Elisabeth forms (re-forms?) tenuous bonds with the other patients, haunting figures who exist less as traditional characters—they have no personality or past experiences that can be brought to bear on the narrative—than as bodies in a room, relating to each other by way of touch. Without mental permanence, a fierce grab of the wrist comes to signify total trust, and a door slammed shut erases a relationship for good. 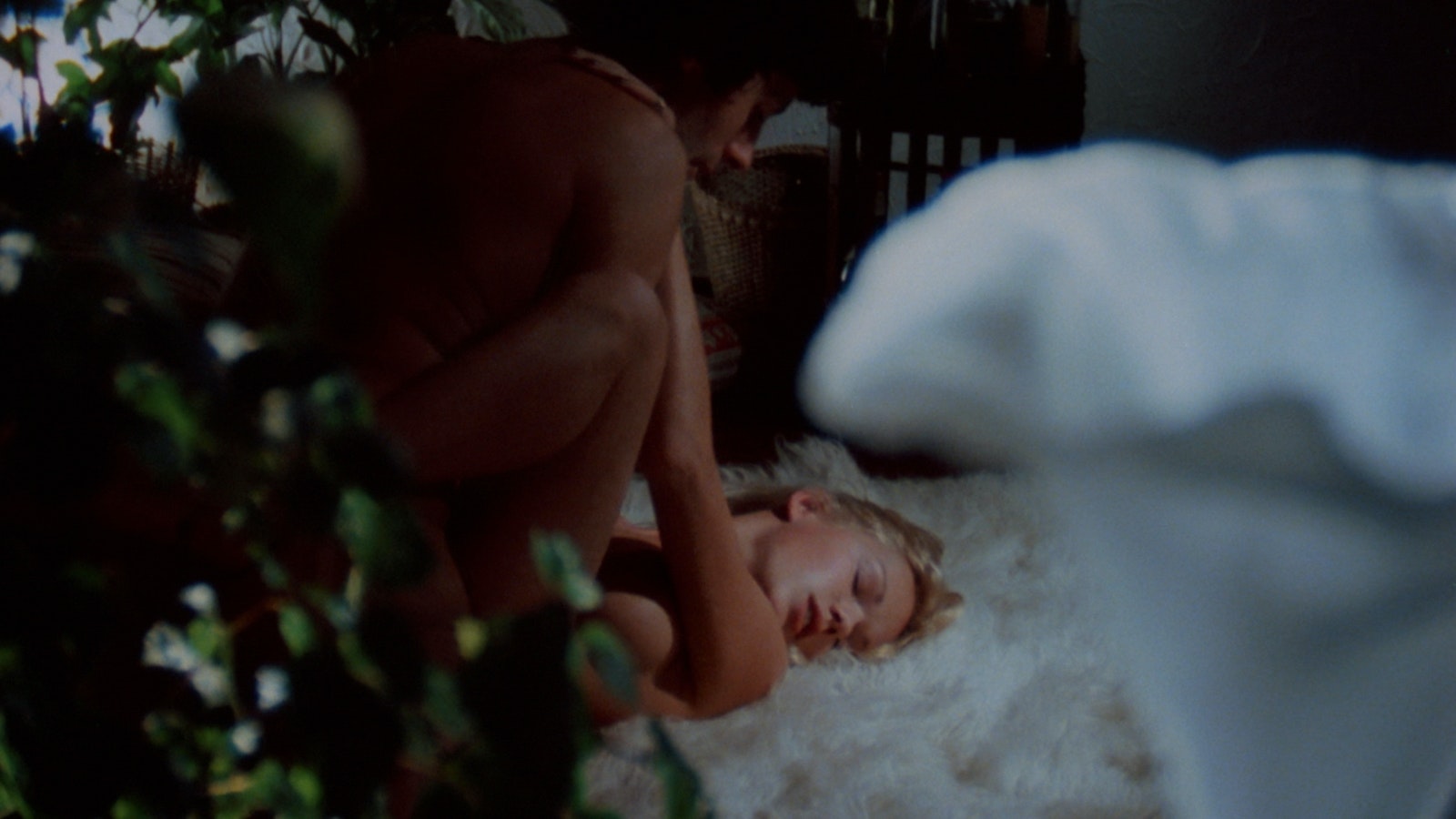 The flickering souls shuffle through the clinic’s sterile hallways and past its over-Windexed windows, begging the other patients for details to help fill their half-memories in. They whisper to each other in the corners of the frame, familiar faces nurturing an extramental camaraderie. Rather than the words they exchange, it is the felt sensation of exhaled breath upon skin that binds them to one another. “The only thing left for us to do is to touch our bodies. It’s our only pleasure, the only one we don’t forget”—so says Elisabeth’s roommate Catherine (Catherine Greiner), offering Elisabeth a somber come-on. Such support is necessary to keep the doctors at bay. A particularly nasty attendant waits in hallways for women to assault, knowing they won’t remember—but all the suits and scrubs use their knowledge over the patients to assert control.

In the poetic final section, Elisabeth is on the run again, “lost in the world of the tower apartments,” as her fellow fugitive Veronique (Dominique Journet) describes it. “On the run” is overselling it a bit, however: the drugged women lurch along at inchworm pace. The scant narrative threads that have held together thus far disintegrate, and Rollin turns to documenting melancholic devastation across the neighborhood, which was purpose-built over the ’60s and ’70s to replace blue-collar factories and farms with glass-box corporate constructions. Elisabeth forgets her motivations once more—a heartbreak played to lip-trembling perfection by Lahaie—and wanders through an empty train station aimlessly, her pursuers barely bothering to chase her anymore, save for Robert, maddened with love.

All the players look equally small under the shiny postwar skyscrapers, and the violence turns senseless, as if the film, too, has forgotten why any of this is happening. There are striking geometric compositions of the boxy high-rises and pans sweeping skywards that evince an awkward, discomfiting joy. Rollin moves the camera more in this section than in any of the previous, and each jerky zoom betrays the hand operating it—call it Rollin’s touch. Narrative plausibility is cast aside, and the ending is downright hopeful: like in a fairy tale, time stops moments before a trigger is pulled on Elisabeth, as she and Robert stumble into the distance. In this ever-alienated world—and the high-rises have only climbed higher—the two go out with the ultimate symbol of their defiance: hand touching hand. 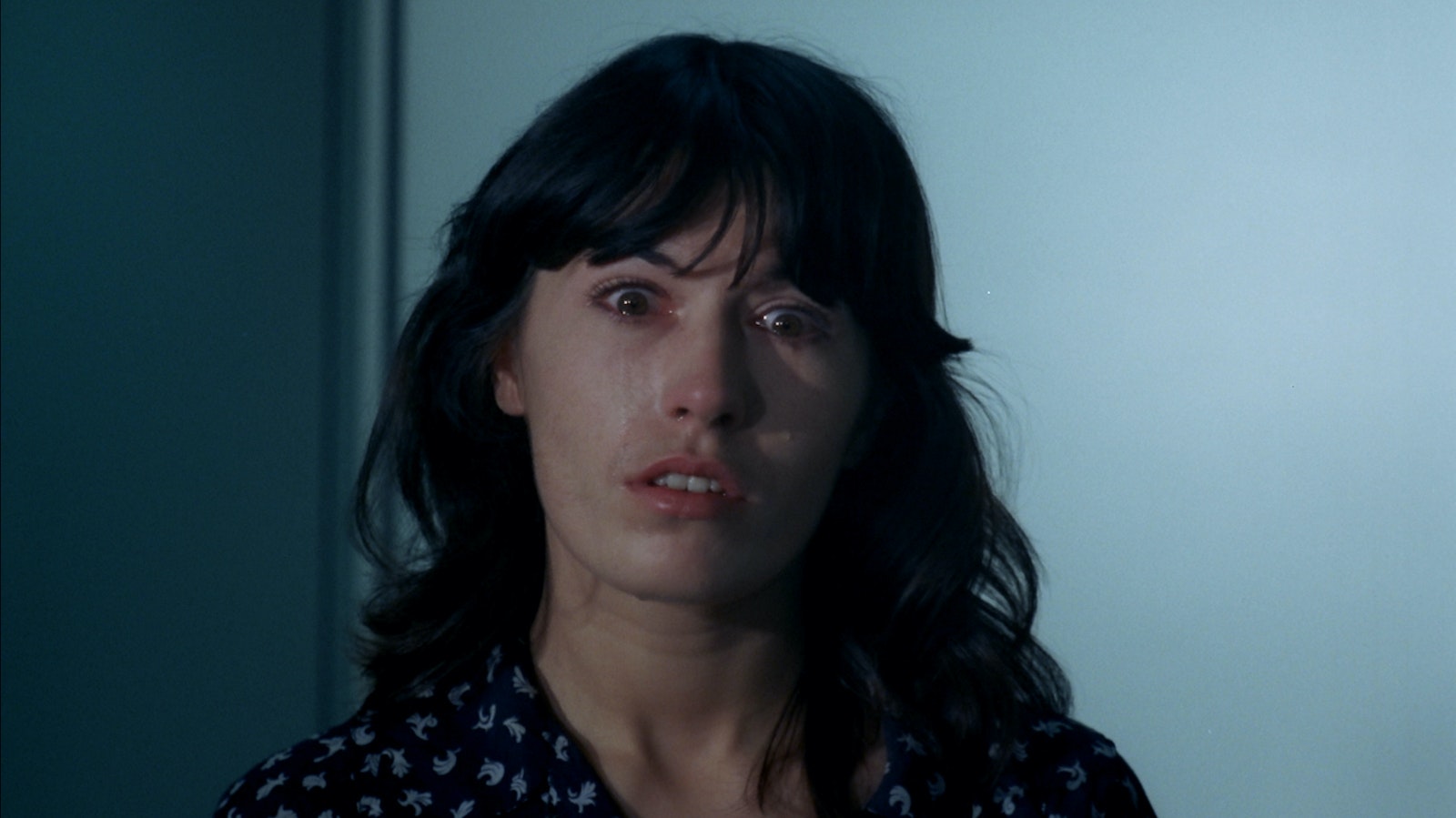 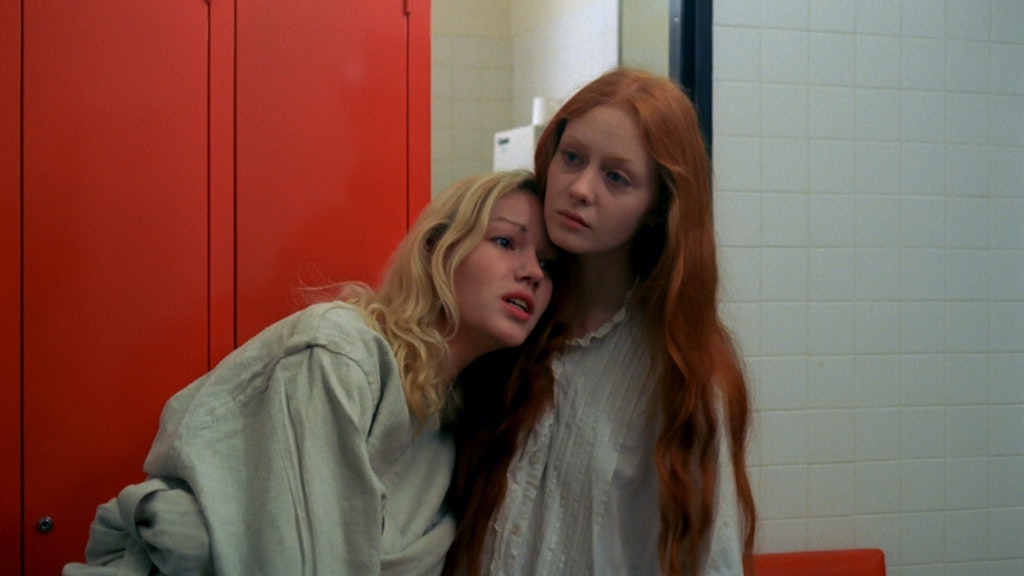 Night of the Hunted