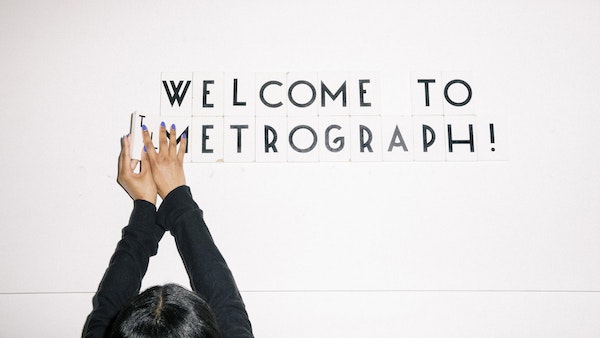 “We’ve missed seeing you at the theater!” said Metrograph CEO Christian Grass. “We are grateful to our team who have been working behind the scenes preparing our space and our programs to offer an experience which will be both exciting and safe. Looking forward to our continued growth, and to seeing everyone very soon.”

“On behalf of our team, thank you to everyone who stopped by to knock on our doors and say an encouraging word, who added a supportive comment on one of our posts, and most especially to the overwhelming wave of supporters who joined us this year as Members. We can’t wait to see the New Yorkers at Ludlow Street, and those further away on Metrograph At Home.” said Metrograph Founder Alexander Olch.

Metrograph will welcome audiences back on October 1 with a selection of films meant to be seen on the big screen, beginning with the brand new 4K restoration of Andrzej Żuławski’s stunningly visceral Possession, starring Isabelle Adjani and Sam Neill. Other new release highlights include Labyrinth of Cinema, the final film from master Nobuhiko Obayashi; a new restoration of Christopher Petit’s Radio On; Lisa Rovner’s Sisters with Transistors; and Todd Chandler’s documentary Bulletproof. Repertory series and special event screenings include the Amos Vogel Centennial, as Metrograph joins New York City institutions in paying tribute to the legendary cinema impresario; Isabel Sandoval Selects, with Sandoval in person; Lives of Performers, a series dedicated to one of cinema’s most enduring themes: performers’ lives on and off the stage; and Get Crazy, an antidote to this last year of isolation featuring a program of films that celebrate big crowds, sweaty parties, and intimate gatherings. Continuing Metrograph's dedication to film projection, our reopening program showcases 16mm and 35mm screenings, including Opening Night, Ali: Fear Eats the Soul, Story of Last Chrysanthemums, All That Jazz, and many more.

“These times present an exciting challenge, which has made it so fun to program a slate of films - from Lola Montes to Project X - that will be shared with an audience of friends and strangers”, said Metrograph Programmer-at-Large Nellie Killian. “Spontaneity is something that has been in short supply during the pandemic, but Metrograph has always been a place where you could show up on a whim and see something great. We're looking forward to inviting people in to be surprised by something they haven't seen, or excited to revisit an old favorite.”

Metrograph At Home programming continues to stream at Metrograph.com and on the Metrograph TV app, featuring highlights from theatrical programming, including Possession and selections from Lives of Performers, along with exclusive titles. The full slate of October In Theater and At Home programming, including weeklong engagements, repertory series, special events, and digital exclusives, will be announced in the coming weeks.

Metrograph is also thrilled to once again begin hosting select private events and premieres at 7 Ludlow. Metrograph's theaters and Commissary Restaurant specialize in unique curated experiences for private events, ranging from large scale red carpet premieres to more intimate preview screenings, along with receptions and after parties as awards season and the holidays quickly approach.

Upstairs at the Metrograph Commissary, Chef Dennis Spina has been working on an updated menu for patrons. The Commissary Restaurant, inspired by the original studio restaurants of Hollywood’s golden age where famed actors and working crew members would dine, drink, and socialize together, looks forward to welcoming back its loyal patrons and new guests. Also upstairs, The Metrograph Bookstore returns with a selection of vintage, rare, and new film books, in New York’s only cinema dedicated bookshop. New items will be added regularly, with book signing events and online offerings t0 be announced.

While we’re excited to welcome everyone back, the safety of our team and audiences remains Metrograph’s highest priority. In accordance with New York City regulations, all staff and audience members are required to be fully vaccinated against COVID-19, and must present a valid proof of vaccination along with a photo ID. Masks are required for entry and must be worn at all times, except when seated in the Metrograph Commissary. Please visit Metrograph.com to read our full health & safety policy.

Metrograph Membership is available for $5/month or $50/year, and offers access and benefits to all In Theater and At Home programs. More information available here.

Banned upon its original release in 1981, Andrzej Żuławski’s stunningly choreographed nightmare of a marriage unraveling is an experience unlike any other. Starring Isabelle Adjani (Cannes Best Actress 1981) and Sam Neill and featuring an iconic pulsating score, visceral imagery, and some of the most haunting performances ever captured on screen, Possession is cinematic delirium at its most intoxicating. A Metrograph Pictures release.

Complimenting the run, Metrograph will present a program of some of the most iconic cinematic divorces, from An Unmarried Woman to Desert Hearts; a double bill of films featuring Sam Neill; and two films by collaborators and Possession devotees Amy Seimetz and Kate Lyn Sheil.

Archivist, historian, and distributor Tommy José Stathes joins us for a program of rare prints of early animated films from his collection.

Metrograph presents a 4-program series focusing on Amos Vogel's long out-of-print 1974 book Film as a Subversive Art, newly-revised and published by Film Desk Books. The series is comprised of a wide variety of films subversive in form and content, touching on once-forbidden subjects and representing the new consciousness emerging while Vogel was composing the book. Titles include Zorns Lemma, Kusama's Self-Obliteration and Diary of a Shinjuku Thief. Guest programmed by Herb Shellenberger.

An antidote to this last year of isolation, or a horrific glimpse into the world of sweaty parties, big crowds, and intimate gatherings we are about to re-enter? Titles include Cold Water, The Exterminating Angel, House Party, The Leopard, Project X, The Reluctant Debutante, and more.

While some successful blues acts sell out arenas and tour around the world, many of the best blues artists remain relatively unknown. Music scholar Robert Palmer (author of the eponymous book that inspired the film), filmmaker Robert Mugge, and musician Dave Stewart take an intimate look at these lesser-known yet phenomenal artists, showcasing incredible music from talented players who have never been signed to major labels, but represent the very heart of the blues itself. A Film Movement release.

London DJ Robert (David Beames) embarks on a road trip from London to Bristol to investigate the recent death of his brother in Christopher Petit’s debut feature, soundtracked by a remarkable collection of art rock, punk and new wave. As radio newscasts and strangers on the road address the dire state of Britain's Winter of Discontent, Petit deftly melds stylistic, narrative and documentary elements to craft an undeniably eerie and reflective mood that casts a hypnotic spell on the viewer. A Fun City Editions release.

With Le Navire Night, Duras explores the matrix of love, desire and language in her characteristically oblique and experimental style. The film’s lovers are never allowed to meet in person, instead carrying out their conversations over the phone, using unlisted phone lines leftover from the German occupation of Paris. At once dreamlike, intimate and fundamentally anonymous, Le Navire Night challenges the conventional relationship between sound, image and narrative. An Icarus Films release.

The final film by Nobuhiko Obayashi finds the late director returning to the subject of Japan’s history of warfare following the completion of his “War Trilogy,” which ended with Hanagatami. A breathless cinematic journey through Japan’s past, Labyrinth of Cinema finds Obayashi using every trick in his book to create an awe-inspiring, visually resplendent anti-war epic that urges us to consider cinema as a means to change history. A Crescendo House release.

To celebrate the essential video art distributor’s 50th anniversary, Metrograph and EAI have partnered for the rest of 2021 to present a series of programs highlighting the organization’s incredible catalogue and role in the history of artists’ moving image work.

Dedicated to one of cinema’s most enduring themes, Lives of Performers highlights films about actors, dancers, and musicians: the spectacle of the stage and the complexities of life out of the spotlight. Titles include All Desire, An Actor’s Revenge, Around a Small Mountain, The Band Wagon, Center Stage, Gold Diggers of 1933, The Golden Coach, Jane B par Agnes V,  Jo Jo Dancer Your Life is Calling, Lola Montes, Opening Night, Perfect Blue, The Red Shoes, Spettacolo, Story of Last Chrysanthemums, To Be or Not To Be, Unfaithfully Yours, and more.

In celebration of Lucy Dacus’s third studio album Home Video, Metrograph and Matador Records have partnered to present two films with personal and thematic ties to her work: The Beaches of Agnes and Amarcord.

Bulletproof explores the complexities of violence in American schools by looking at the ways we try to prevent it. Traveling across the United States, the film observes longstanding school rituals like homecoming parades, morning announcements, and basketball practice alongside newer traditions like lockdown drills, teacher firearms training, and metal detector screenings, weaving together these moments in a cinematic meditation on fear, violence, and the meaning of safety. A Grasshopper Film release.