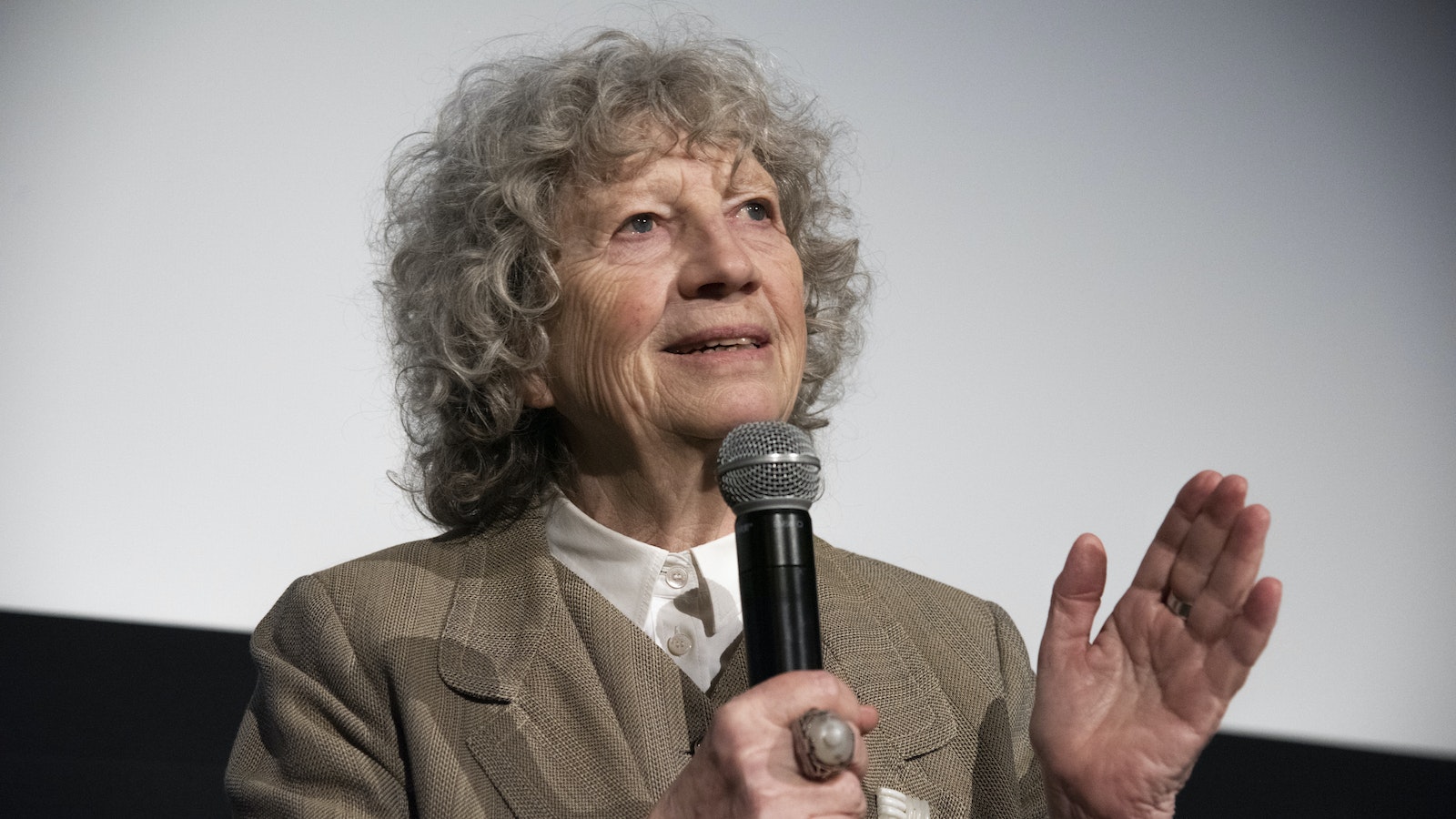 In March 2019, the German filmmaker joined Metrograph to discuss Joan of Arc of Mongolia (1989), her hybrid adventure epic aboard the Trans-Siberian/Mongolian Railway.

Ottinger’s Paris Calligrammes streams At Home through January 19, as part of our 2021 Favorites. 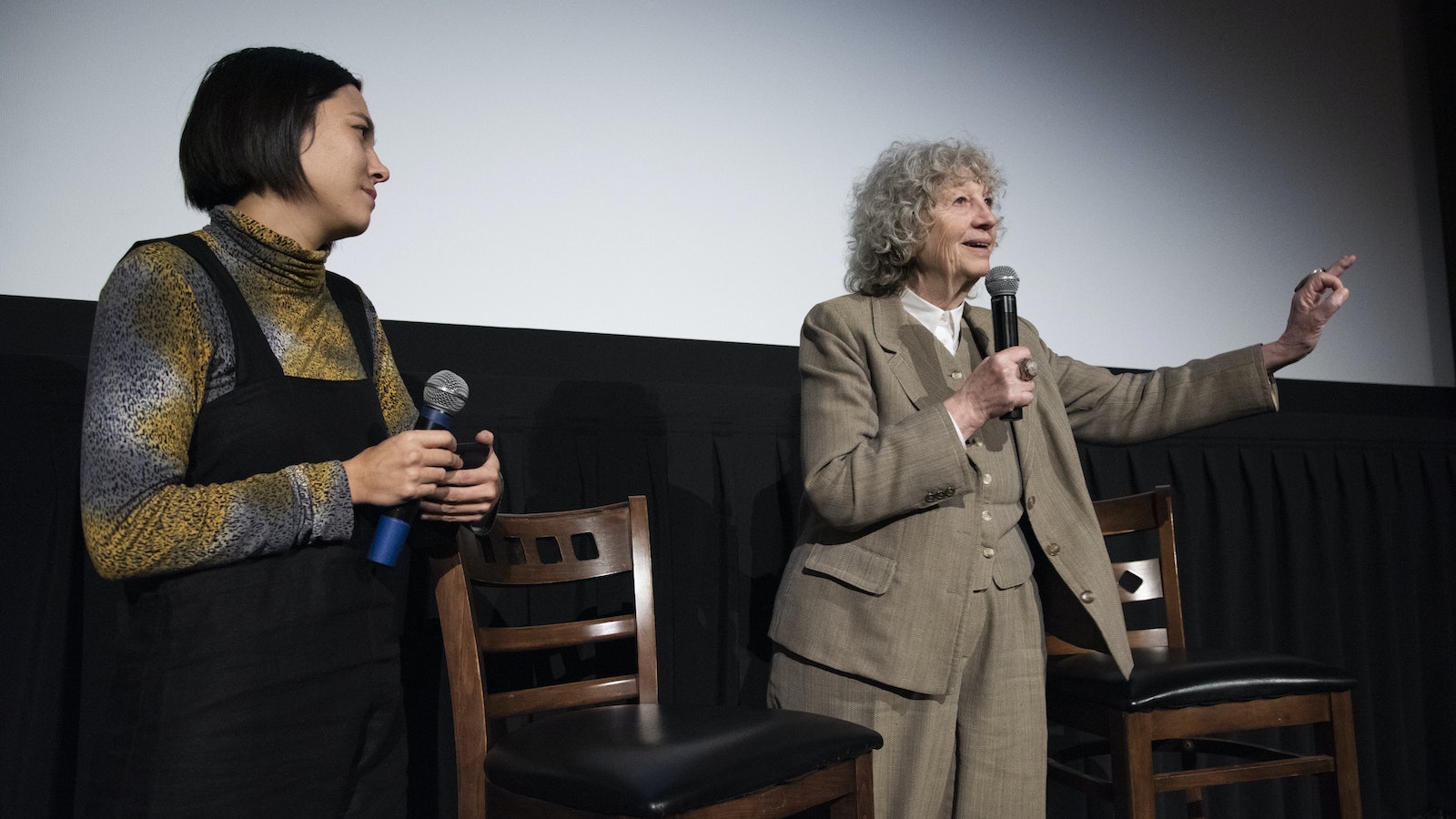 AILY NASH: Thank you so much for your film. To start, I wanted to ask about the ensemble of characters who come together at the beginning. It’s an incredible group of people, and there’s this sense of anachronistic grouping, it feels as if they’re all from different eras.

In the beginning, I thought it could be interesting to show a group of Westerners, from different backgrounds and different times, who are all coming together on this train [the Trans-Siberian/Mongolian Railway] that  for a long, long time—hundreds of years—had transported not only people, but also ideas. This train started in Paris and went to Berlin, to Moskva, and then Siberia, until Vladivostok. And there was another part where you could go through Mongolia, through the desert. The train itself is a kind of museum, it was like a luxury hotel full of all these diplomats who were travelling. And then you have a young girl, who is this kind of knapsack adventurous traveller [Inés Sastre]; you have Lady Windermere [Delphine Seyrig] who is this very educated person with a lot of ethnological sayings; you have a narrow-minded German teacher [Irm Hermann], who helps to understand what she’s seeing; and you have the American Broadway star [Gillian Scalici]. I found this an interesting group.

Of course, these are not real persons, they are figures, they are there to explain something and to have their view to the world. What is interesting is in the beginning, it’s very artificial, you have only a view from inside to outside. Everything is painted. We used this old-fashioned paintings to show the green forests when we go through Siberia. And then when [the characters] are pushed outside, something completely different starts. I found this idea of an encounter with all kinds of misunderstandings a very interesting way to start.

The second part opens up to the landscape, as well as this more observational, almost documentary-type hybrid mode. As a filmmaker who makes fiction and documentary films, I wonder if you could speak to your interest in blending the two here?

Afterwards, I made a very long documentary in Mongolia because I had the impression it would be very interesting to go deeper into documentary, I made an eight-hour movie called Taiga [1992]. But in [Joan of Arc of Mongolia], for example, the monks from Hohhot, the Lamaistic monks who perform the cham ceremony, I had asked them if it was possible for them to do a real cham ceremony. And it was the first time in 40 years that the monks had done it again outside in the grasslands, because before they couldn’t do it, it was very difficult, most of them were killed or persecuted. And so the nomadic people were very moved that they were coming… [Whereas] the shaman, for example, it is a woman who knew about the ceremonies because as a child she had experienced some of the seances. But she is not a shaman, in contrary to the film I made later where you have two real shamans, old ones. And so I found this [mix] interesting.

Mongolia has had an interesting historical development, so, like in the train—Lady Windermere is clearly a person from the turn of the 19th century, and Giovanna is clearly a girl from today—I also tried to bring in a little bit of the Mongolian history, to tell some of the history from [the past] 500 years. A lot of things have been lost.

Also, the Mongolians I worked there with were all non-actors. Only the actors working with me, the Westerners, were actors. This is also a combination I like very much—to have great actors, famous actors, really very professional actors, and to then have them work together with people who, maybe for just one role, are perfect. It provokes a kind of reaction, it changes professional actors and it changes also the non-professionals; there’s kind of inter- dialogue or inter-reaction. So all these hybrid situations are very interesting, because you can find out something, you can play with it.

You were there with the whole crew and the actors for a couple of months, what was that experience like? Were any of these real-life experiences and encounters reflected in the film?

You know, I am always preparing my films with books. There are collections of photographs, of things I collected, of drawings—not only the text, not only the storyboard. If you go to people who don’t speak the same language, and you show them the collection of their culture, you have the images, immediately you are in a wonderful discussion with them, you don’t even have to ask! I have hundreds of photos where we are all standing over the books as a big group; we are discussing what it is, and they are telling me, “Oh my grandmother had this costume with the high shoulders, and she had this, and we still have this wonderful ornaments.” And I told them, “You know, I like to get the best of your culture.” So they were running around—riding round, you have to say—and they found the best singers, and the best people. And I had a wonderful grandmother helping me with the rituals.

Fortunately, the Mongolians, they do big festivals for weddings, for spring festivals, so they are used to having lots of guests. We asked them to help us, and when we made this big festival, , towards the end, I had chosen some of the people as actors. But then their whole families would come, and then many brought their yurts with them, so we had everything around! This was just fantastic because everybody wanted to participate. And maybe this is really typical of this culture, and in the nomadic life—who at that time, in Inner Mongolia, were still continuing in some places—the most important thing is to share, everything you have to share. I remember one day, I had a little piece of chocolate in my pocket, and I gave it to a little girl. She broke it, this little piece in nine parts, because nine people were there, and she has given [a piece] to each one. For this child, to have this piece of chocolate was really something unbelievable, but she would never have taken it for herself alone. This is only an example, there were many wonderful things. 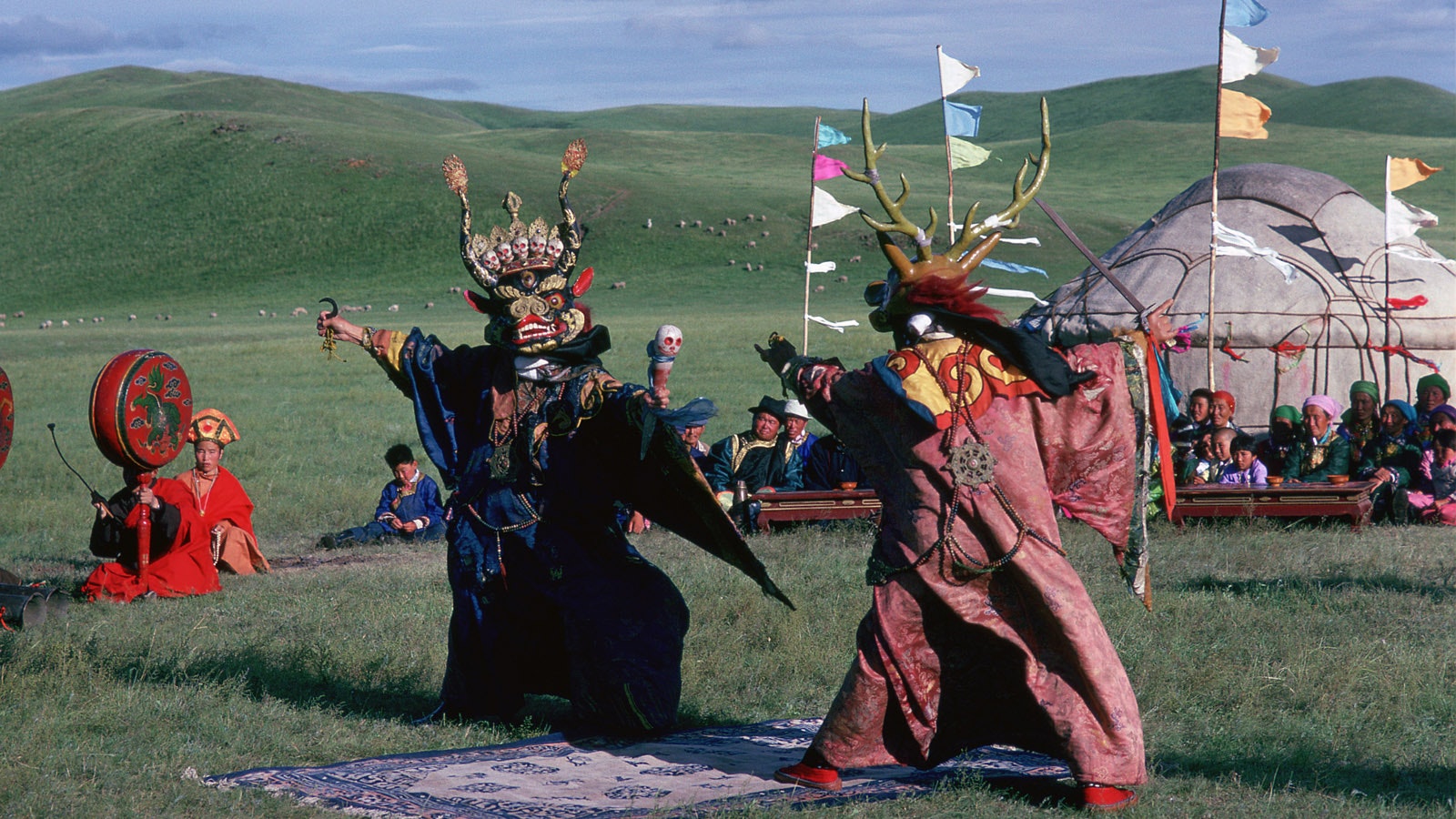 I read an interview where you talked about some of your documentaries as being a kind of encounter with another culture, but that with this film you were thinking of it as performing an encounter. It’s very much interested in questions of exoticism, and what it means to be looking from different points of view. Could you speak a bit about these questions, and what inspired you to kind of work on these questions?

Ja, I understand it is highly discussed in our days. Sometimes I think that [we] don’t see that we are, for the others, as unusual, not to say the word ‘exotic’, as they are for us. They are curious to see why this person is doing this, differently, and as yourself doing it. So it’s a very simple thing, and it’s a very normal reaction. I think we should more look at this. And this is what happened at that time, because you could really talk with the people, and we had such a wonderful relation and curiosity.

Especially in music. I asked everybody to sing whatever they can sing, anything they know. I remember two entire nights in the desert, and the desert is the most wonderful studio you can have. We had all this music, and everybody was singing—people from completely different parts of Mongolia… and they all have different songs. The Mongolians who are always travelling, they had a lot of melodies; the main topic was the separation of the mother from the daughter when the daughter left to get married. There was a lot of very sad songs.

The next important song: the best friend of the Mongolians is his horse, of course. Girls and boys, they all have horses when they are very young, they can ride before they can walk. It’s unbelievable. You can [imagine] how they made fun of us! In this little funny scene [that they performed] towards the end of this festival, they made this sketch about how we were riding. They were always laughing about us because we couldn’t do it very well. This is included in the film….

Also, I had a lot of Western singers; I had this Broadway star, and I had the three Kalinka Sisters, and they were always singing. So the Mongolians started to sing all the songs, from operetta to new songs, and the ladies started to sing the Mongolian songs too. I was so jealous because I had to work so much, and they had these wonderful evenings singing together.

And this epopee I wrote, which is played by the women—the singers are still playing it. Maybe 10 years ago, an ethnologist who was there called me and said, “Do you know that your epopee is still playing here?” I had written it in German, then we translated it into Mongolian, and the singers changed it a little bit so they could sing it better. I still have some wonderful papers with Mongolian writing of the translation. It looks fantastic. 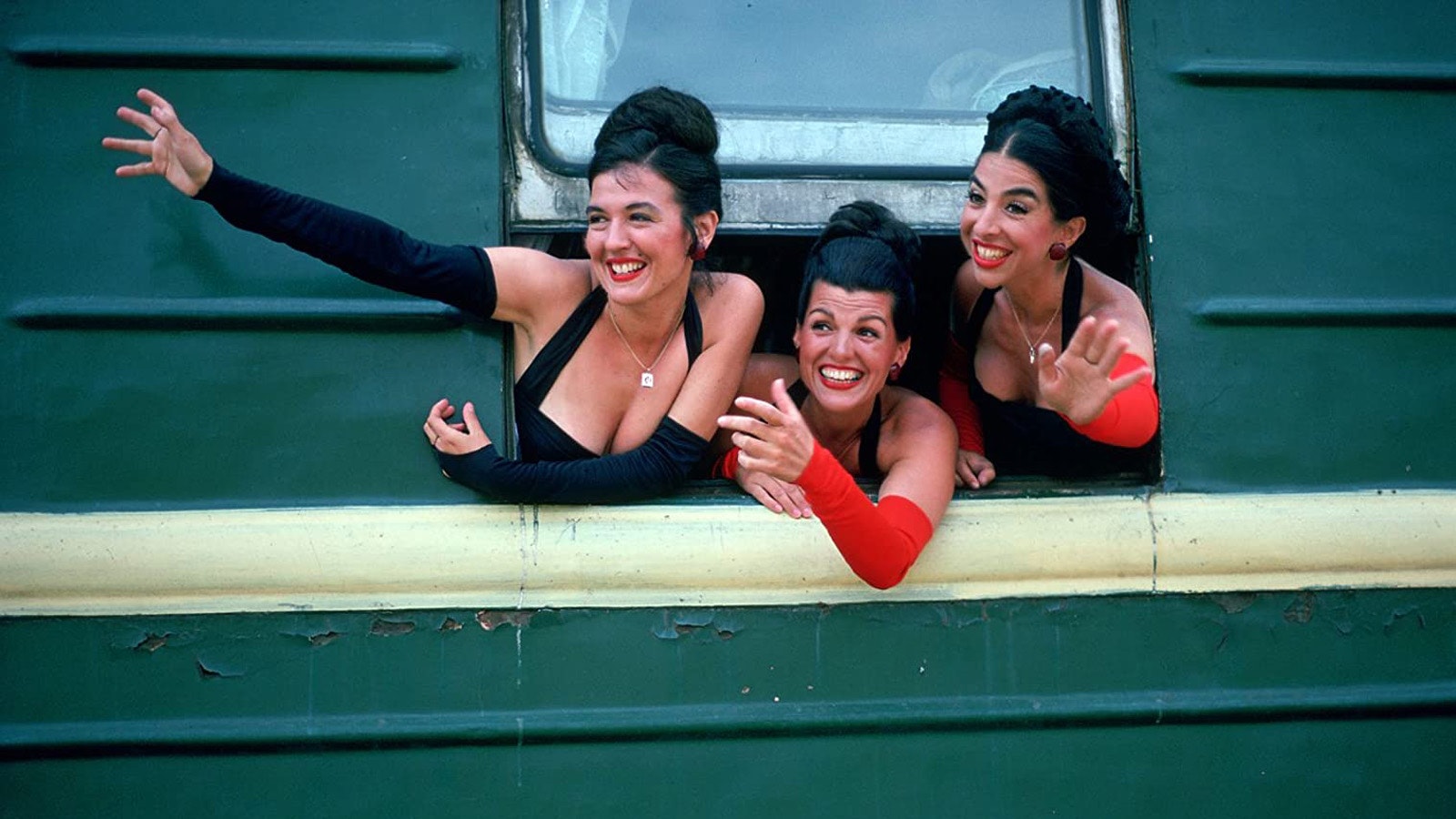 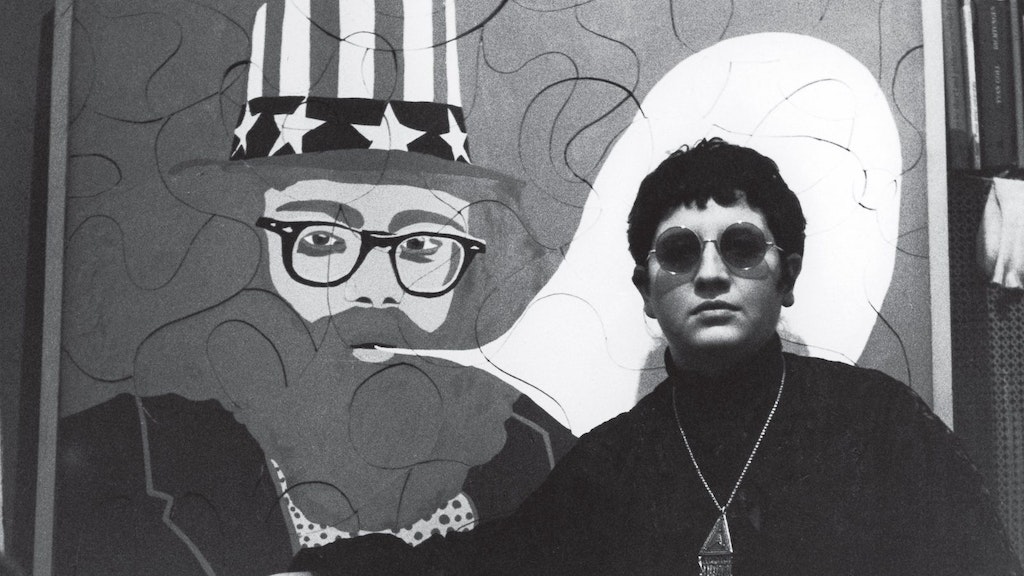