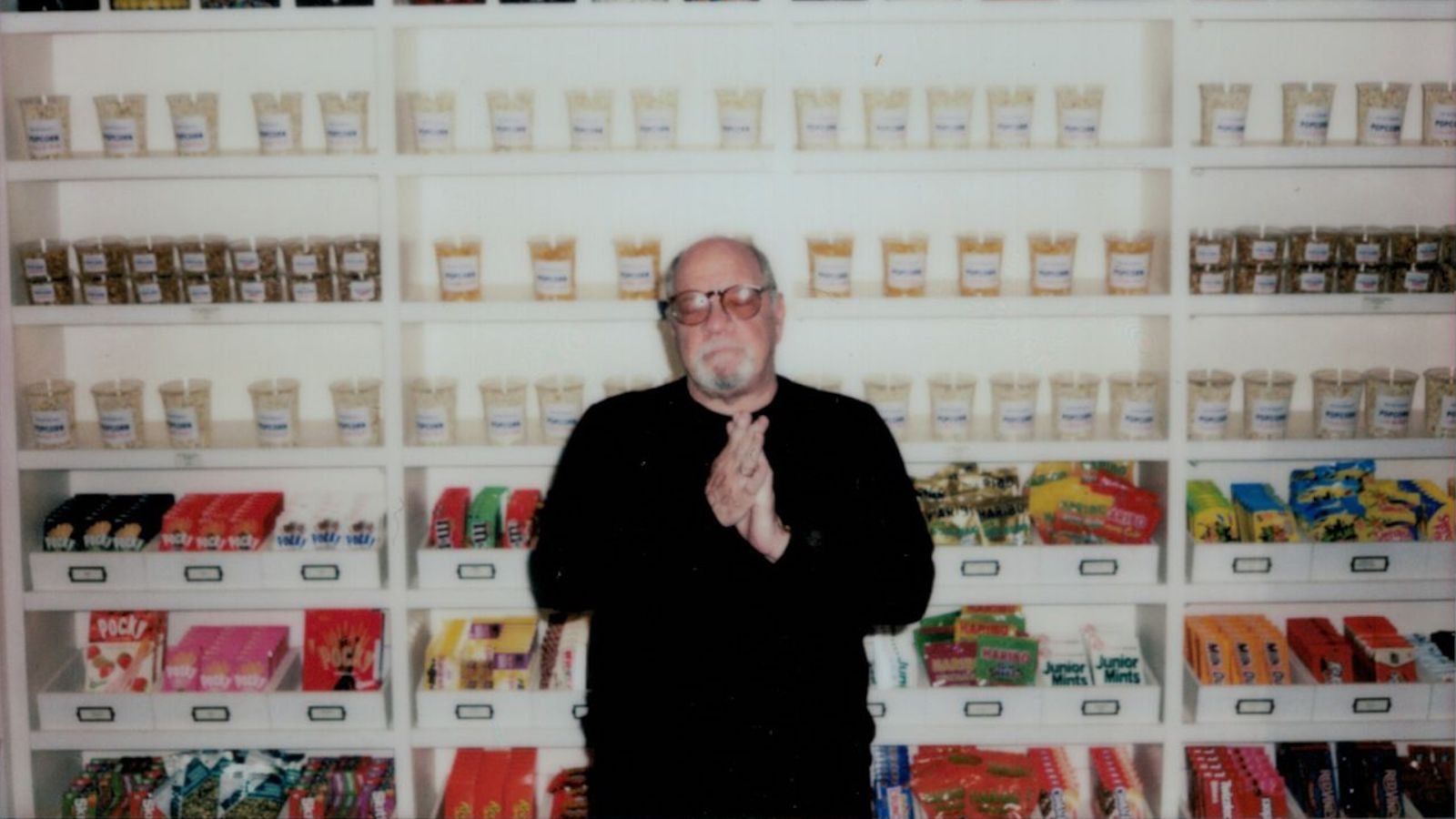 Three years ago, director Alex Ross Perry began to shoot interviews with one of the great critics and filmmakers, Paul Schrader, on the set of First Reformed. The footage has now resulted in a new documentary made in collaboration with The Criterion Channel, Paul Schrader: Man in a Room. Both directors are good friends of Metrograph, so they joined us for a screening of the new documentary, followed by one of Schrader's most controversial films, The Canyons. Schrader joined us upstairs at the Metrograph Commissary to talk about The Irishman, the apocalypse, his upcoming film, and the unlikely archival merits of pornography. 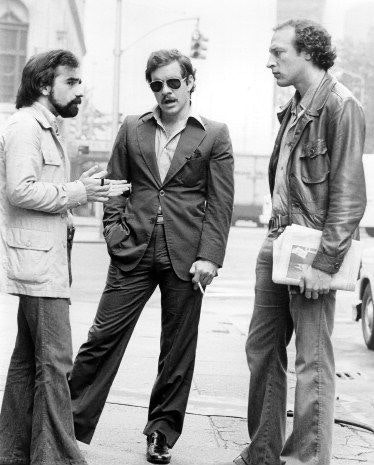 I just came back from doing this whole megillah in France. It was ten days, with a full retrospective. I gave a lecture and made about eight appearances. I did a lot of press. Willem Dafoe came over, Oliver Assayas did a talk with me, Irène Jacob came, and the mayor gave me a dinner. It was kind of exhausting.

Still, I’m sure it was fun.

Well, yeah, I don’t want to burden you, but nothing in my life is much fun now. I go to the hospital every day because my wife is sick. That has defined my life for the last year. I sort of gave up filmmaking to become a caregiver. When this first started happening, I had lunch with Marty [Scorsese]. He said two things: “A spouse can’t be a caregiver, and don’t let it stop you from working.” Well, I failed at both. I became a caregiver, and I stopped working.

But now, in another week, I’m gonna go back to work. I’ve written a new script and I’m making a new film. We’re cast and we’re financed. It’s an original script, very much in the style I like to do. Nice cast. Oscar Isaac is the main guy. Tye Sheridan and Tiffany Haddish. And Willem’s in it too. I love Tiffany. I’ve never met her, but I was on the phone with her for an hour. She’s a firecracker. It’s like talking to a live-wire connection. She’s very funny and, of course, she makes you funny. When someone’s sharp, that makes you get sharp because you want to keep up. So that’s all good. In my films, I’ll sort of combine two worlds that seem to have nothing to do with each other. In the new one, it’s the world series of poker and Abu Ghraib.

I watched Hardcore for the first time this week. Those are two worlds, for sure.

The thing with that movie is, unfortunately, the studio made me change the ending to that film. I’ve always had a problem with that. The original script had the Chinatown ending, which is, he discovers his daughter was killed in a car crash, unrelated to pornography, and he has to go home. That’s Jake in Chinatown. Columbia Pictures said that I had to have the Searchers ending, not Chinatown. So that ending never worked for me.

In my films, I’ll sort of combine two worlds that seem to have nothing to do with each other. In the new one, it’s the world series of poker and Abu Ghraib.

You couldn’t make Hardcore at a studio now. Not in a million years.

When it comes to theatrical, there are four categories left: One is spectacle. Another is the family and children’s films, because you love to see your kid watching with other kids. The third is date movies. That’s primarily horror, some comedy thrown in. And the fourth is club cinema. It used to be called art house cinema, but now that has changed, pretty much, not only around the country, but the world. And club cinema is where alcohol is the new popcorn and you become a member.

You lived in Los Angeles for a long time, right?

About 15 years. I went out to LA to go to UCLA film school in 1968. My sister-in-law died and I was going through her stuff, and uh, she was a hoarder. And I found, from ‘67 to ‘71, I wrote my brother every two weeks. He was in Japan avoiding the draft. And I told him all about coming to LA, being with Pauline Kael, and all about every movie I saw. It was a real interesting look into a time and a place. The thing about letter writing is, when you’re writing letters about what’s happening, it’s not the same as remembering.

So I read these, I had thrown away his correspondence. But he had kept mine. I’m writing to him and I’m saying: I was Melnitz Hall, which was the building of the film school. There was a commotion and everybody went outside. People are running around and yelling. Sirens. And in the hall next to us, the Ralph Bunche Center, the Panthers were having a meeting. And Ron Karenga had a group called the US [Organization], who were a rival group to the Panthers. And these guys came into the Panthers meeting and there was a shooting. And there you see two cats on the linoleum bleeding. People are running this way and that. Then the cameras come. They’re screaming, “Go back to your classrooms!” So I’m writing this to my brother, and the next paragraph is, “And that night, I saw a terrific silent film by King Vidor. Show People. Fabulous." So that was 1968. Panther shooting in the afternoon, silent film at night.

It was a very good year. I liked a lot of films. There are more good movies than there are good audiences. Atlantics, Uncut Gems, Les Miserables. I wasn’t knocked out by Marriage Story. The Irishman is Marty’s The Wild Bunch. The end of an era. Just like The Wild Bunch is the last real Western, this feels like the last real gangster film. There will be other gangster movies, but The Irishman finally said that these guys are out of time, out of place.

Everyone’s watching it on Netflix, but I watched it that first matinee screening at New York Film Festival. There was a crowd, but pretty much nobody had really seen the film. Kent Jones had only seen an hour and a half of it. And everyone was there. And I said, this is the Roman arena. And if Marty is gonna get killed in the arena, I wanna see it happen! But it was uneasy for the first half hour. You could tell. People were very judgemental. And then about a half hour in, people started relaxing and started saying that this is gonna be a good movie. I'm glad it got made. I mean, this was a movie made on six months of shooting, with $160 million.

Not much. Very little, in comparison. It was on The Exorcist thing, maybe $15 to $20 million.

And you’re more comfortable somewhere on the level of, like, Light Sleeper, for example.

Paul Schrader: You know, the film that means the most to me is 75 minutes long, and it probably cost $500,000 in today’s dollars. And you know, that’s Pickpocket. Pickpocket endures. I’m not interested in epics. I’m not interested in these huge historical projects. The kind of films I make, these male character studies, you can do for quite little, actually. A lot of the directors I know, including Marty, including DePalma, are enamored of the big toys. The major spectacle, the camera equipment, the extras. I was never really that interested. 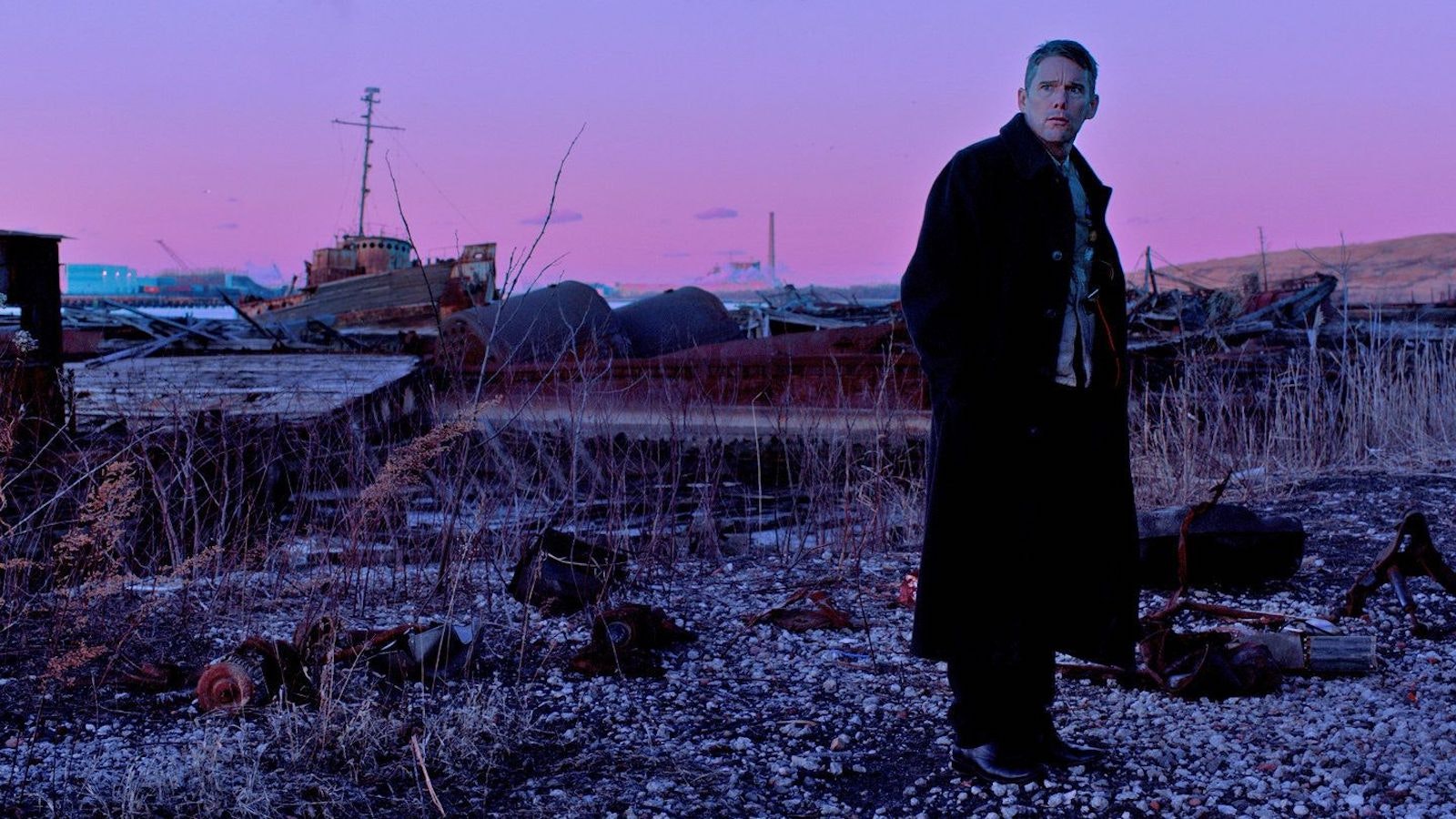 When people first saw First Reformed a couple years ago, I think a lot of people thought of it as sort of your final statement.

Well, it was. At the time I said, “I don’t know if I’ll make another film. I hope so. If I don’t, it’s a damn good last film.” Because it brought these two branches of my life together: the critical studies into transcendental style and the filmmaking that began with Taxi Driver. And so they merged, and there’s a sense of resolution and completeness.

But then I retired and became a caregiver, and this idea came to me. And I put it together the same way I did Blue Collar 40 years ago. I haven’t had much luck with the streamers. You know, First Reformed was turned down at the script stage and at the finished stage by Amazon and Netflix. My new film was turned down by Amazon and Netflix. It’s not a question of, you know, “They’ll do anything”. I’m still outside their system.

I have this film, and maybe I have another film. We’ll see. I had two TV series I loved, and I walked away from them. I told them, “Do what you want.” If they’re successful, that’s five or six years of the writer’s room, which is the idea killer, and I’ve only got five or six years left. I don’t want to spend that five or six years making compromises. Maybe I’ll make a handful of little edgy films, and I’ll make them for next to nothing. That seems to me much better than doing some high-price piece of junk.

When you say that the writers room kills ideas, what do you mean exactly?

Well, I can imagine it being okay, if you’re doing Mel Brooks’ writer’s room. I have a number of friends who came up through that, because then you’re just a bunch of comics around the room throwing around one-liners and comic ideas. But when you’re talking about a serious narrative, then it’s just a level of compromise. If you’re Paul Thomas Anderson and you write Magnolia, and you put it through a writer's room, there ain't no Magnolia. There’s no frogs. There’s no “worship the cock". All of that has been worked out.

I saw that you put First Reformed on your list of your favorite films of the decade.

When you say you don’t believe in the future, you’re talking about the world ending.

Not the world. Our species. The planet is going to be just fine. 500,000 years from now, it will be buzzing along just like it is now. But our gorilla brains have outlived their usefulness. We’re not gonna get out of this fix. A part of me is very curious to see what happens next, and another part of me is happy that I won’t have to. It’s 2020 now. In the next thirty years, we will be at another level of difficulty, with various versions of unliveability, between drought and climate refugees.

You’ve read Sapiens? It’s about five or six years old. Yuval Noah Harari. Big best seller. Really great smart. You read this book and you think, Oh, of course. He’s one of these guys who can put things together. Israeli, homosexual, went to Oxford, brilliant guy. I paid a hundred bucks to listen to him at a Times Talk. Sapiens is the history of intelligence from our planetary beginnings to the present. There’s no positivity in the book. Basically, it’s saying there are three horses of the apocalypse: Nuclear holocaust, climate collapse, and artificial intelligence. In some way, AI is the most appealing, because that is the natural form of evolution. That means we’ve evolved into a new synthetic species adapted to this world we created. They’re in a race to end our species. And the question is who gets to finish us off? 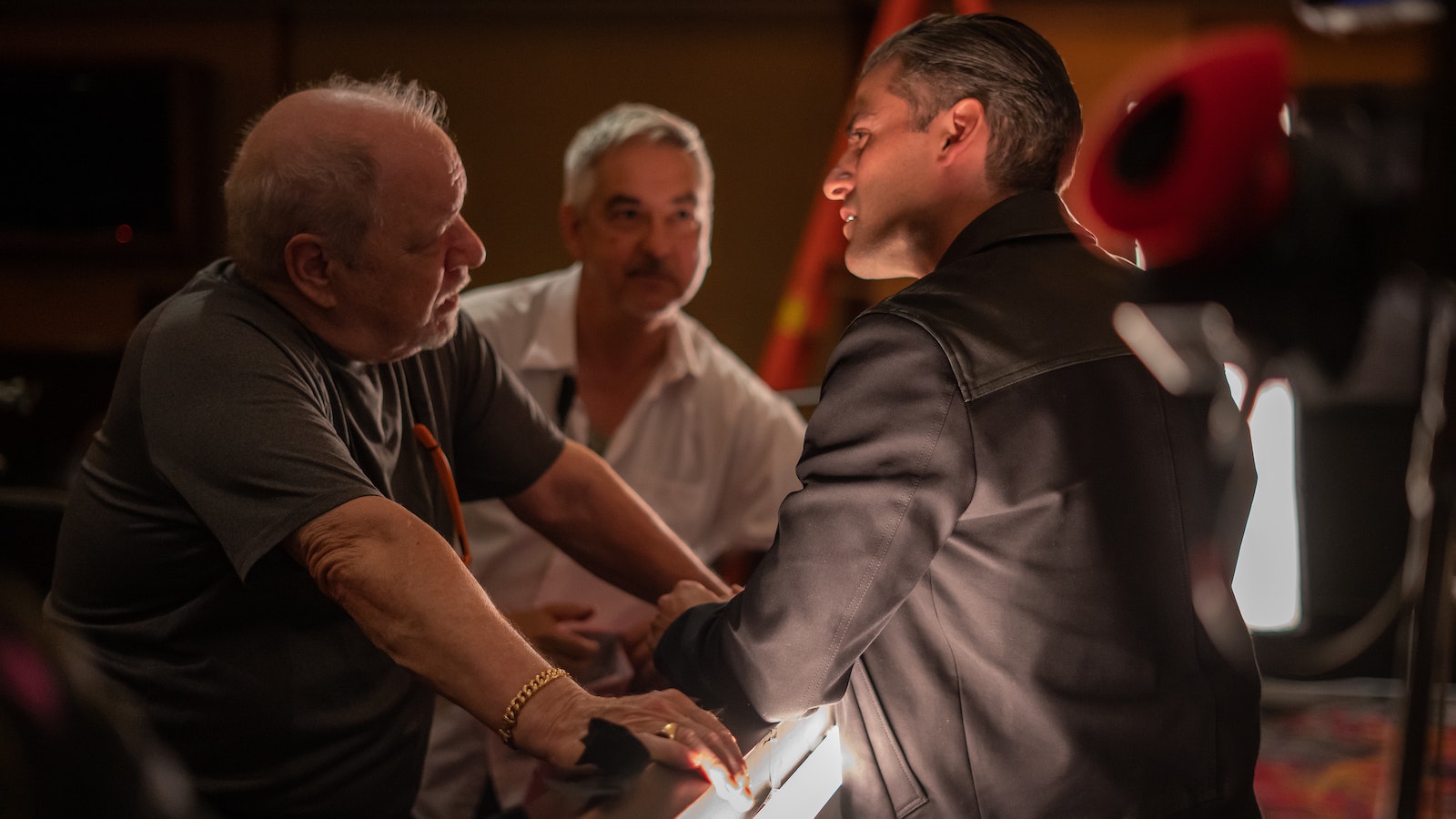