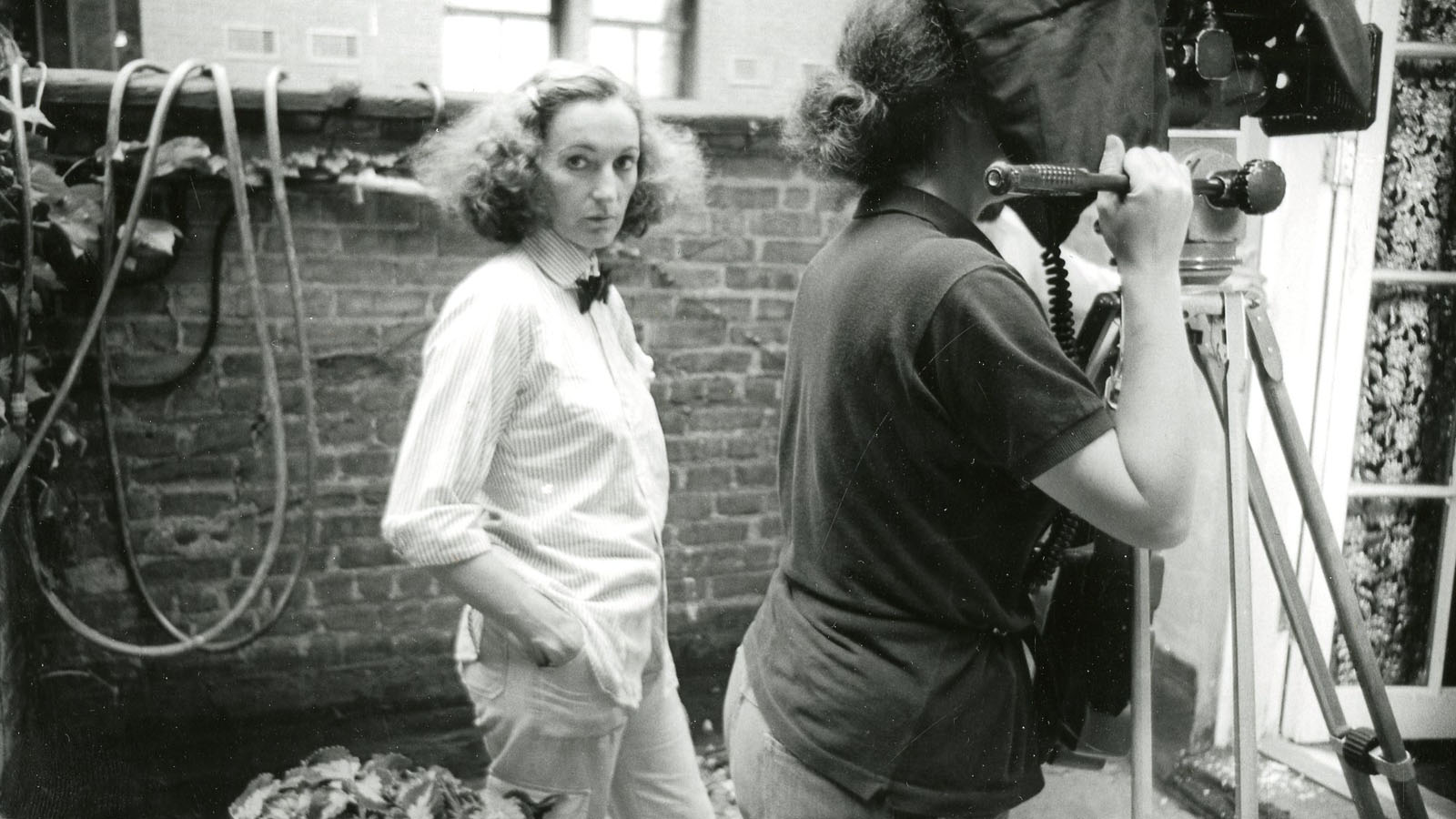 Reflections on My Cinema

The filmmaker, actress, and curator takes us on a verbal and visual tour through her career, from making her first feature Deux fois in the late ’60s to programming the Bleecker St. Cinema in mid-’70s New York City. 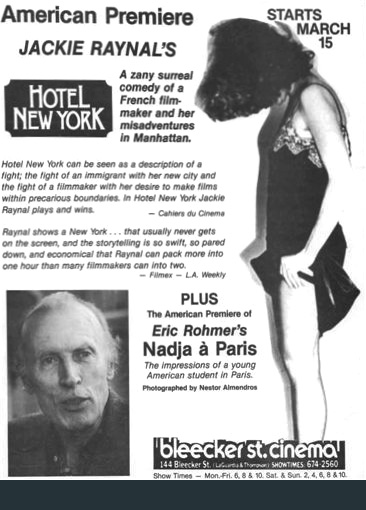 When I opened Hotel New York (which Éric Rohmer had seen in Paris when it premiered at the Studio Raspail), I asked him if we could also include his short Nadja à Paris, which I edited. He accepted and sent the print. The two films played well for a few weeks, and I thank Amy Taubin for the good review in the SoHo News.

The show at MoMA (read the program here) in the mid-’70s was not a piece of cake. For the Q&A after the screening, the audience didn’t dare to ask me any questions. But curator Larry Kardish, who knew the film well and loved it, was the perfect go-between with a mute audience!  I really don’t remember it well as it was a long time ago, but the audience was very cold and not very communicative.

This letter from Serge is as good as it can be in terms of giving clues to what I want to do. He was such a brilliant thinker and writer. I especially like where he said: “It’s not mainly what’s on the screen, but it is to know that there is a place for the spectator: a place for him to be allowed to ’see.’” 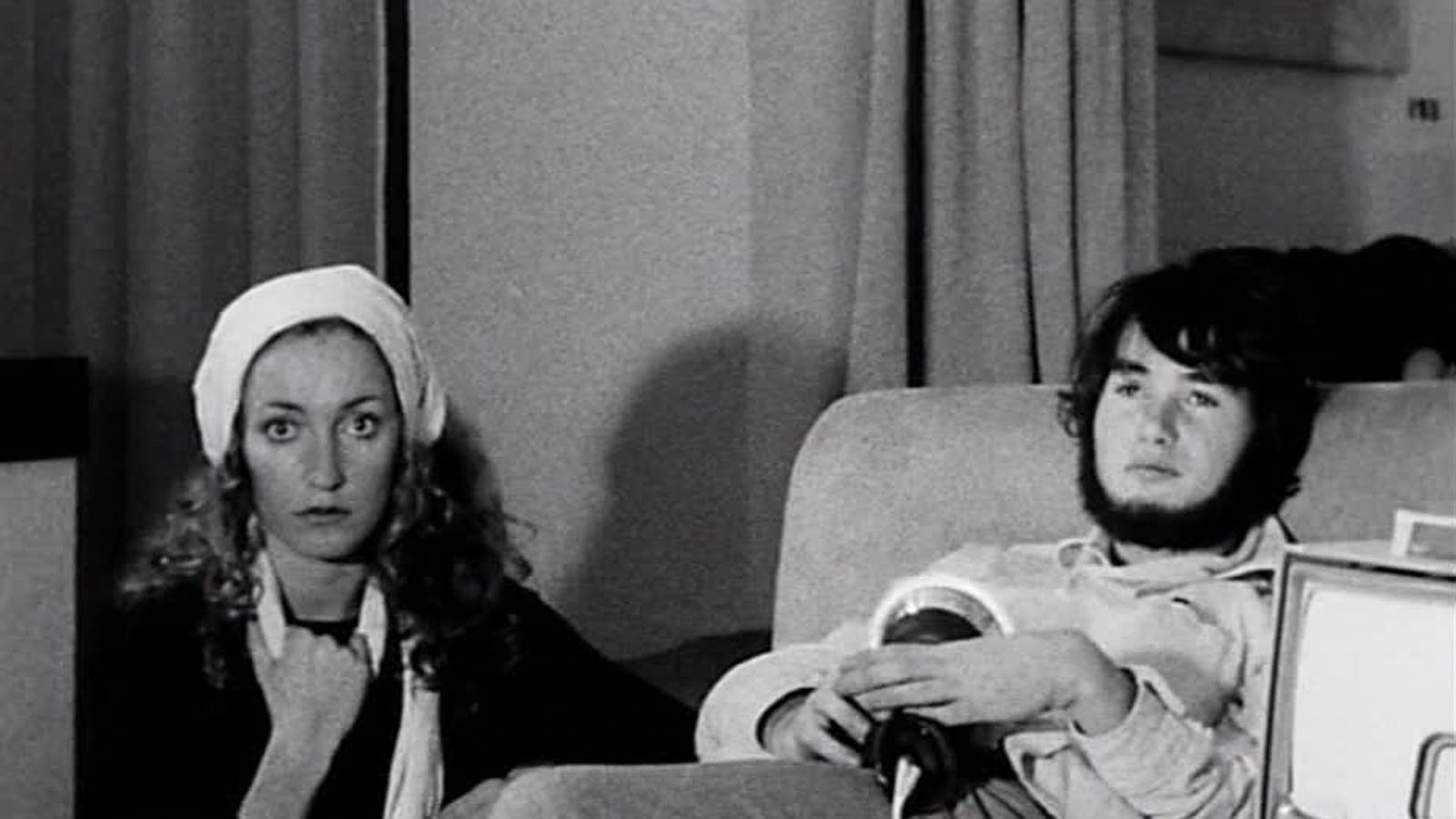 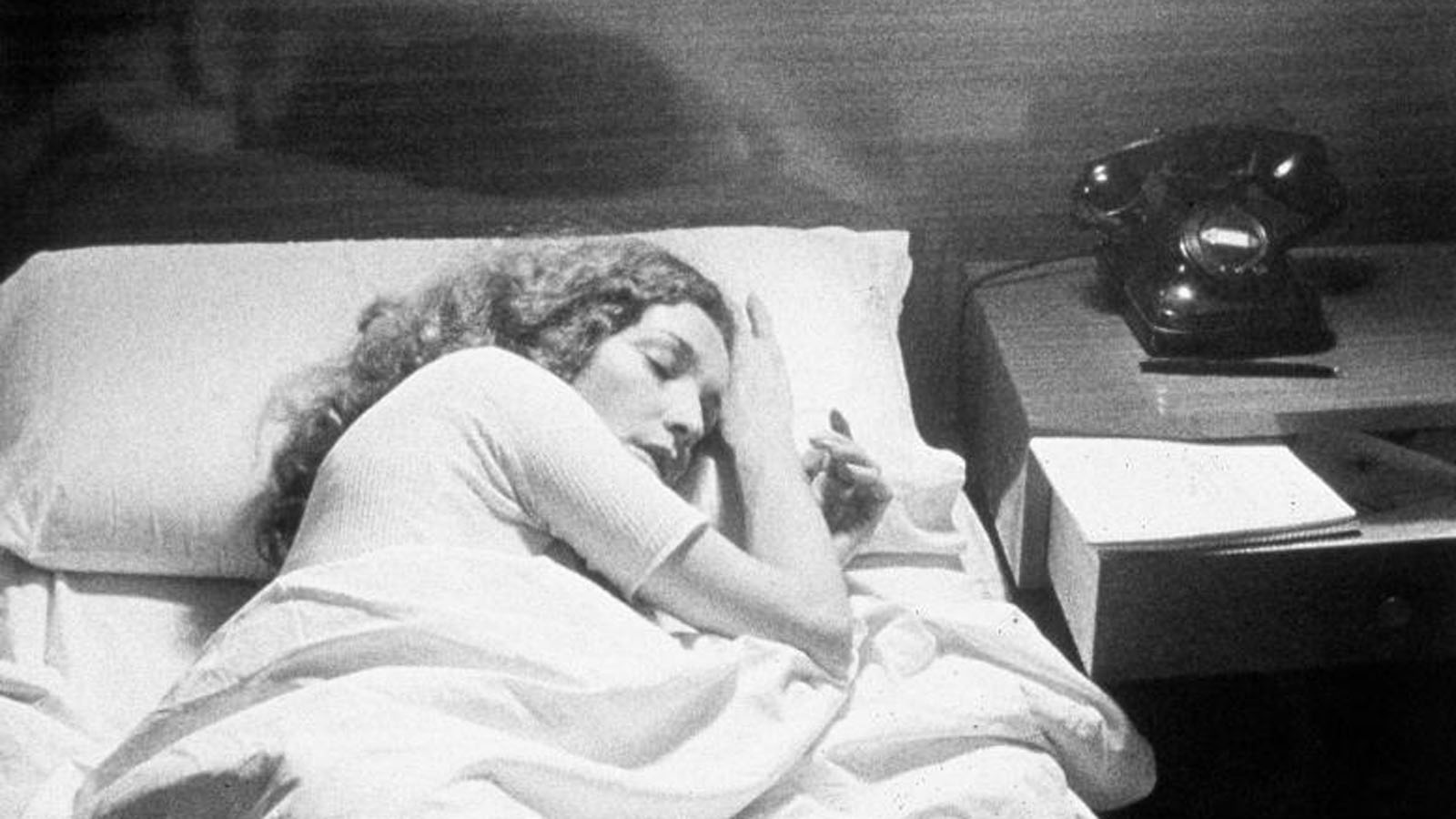 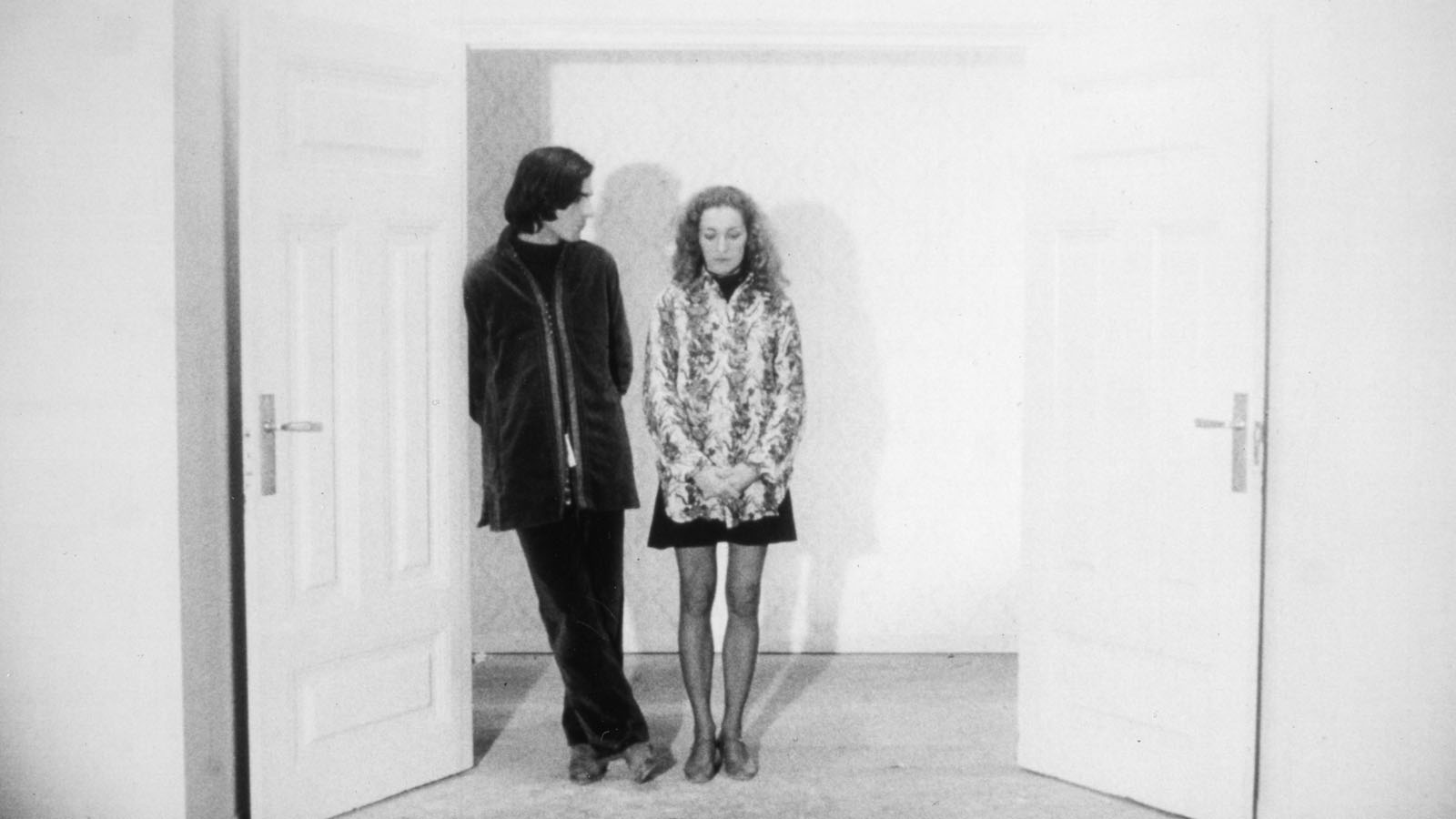 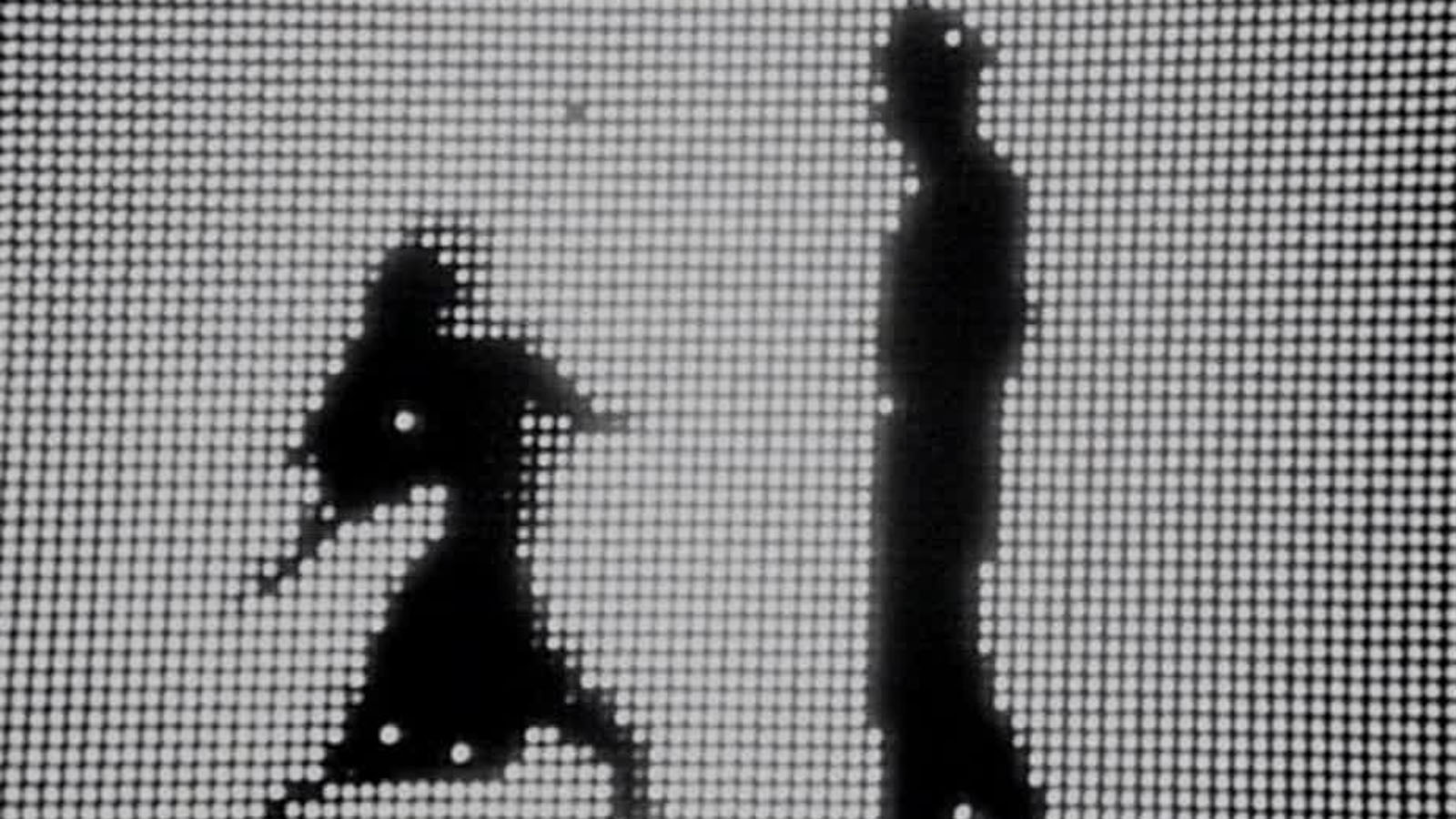 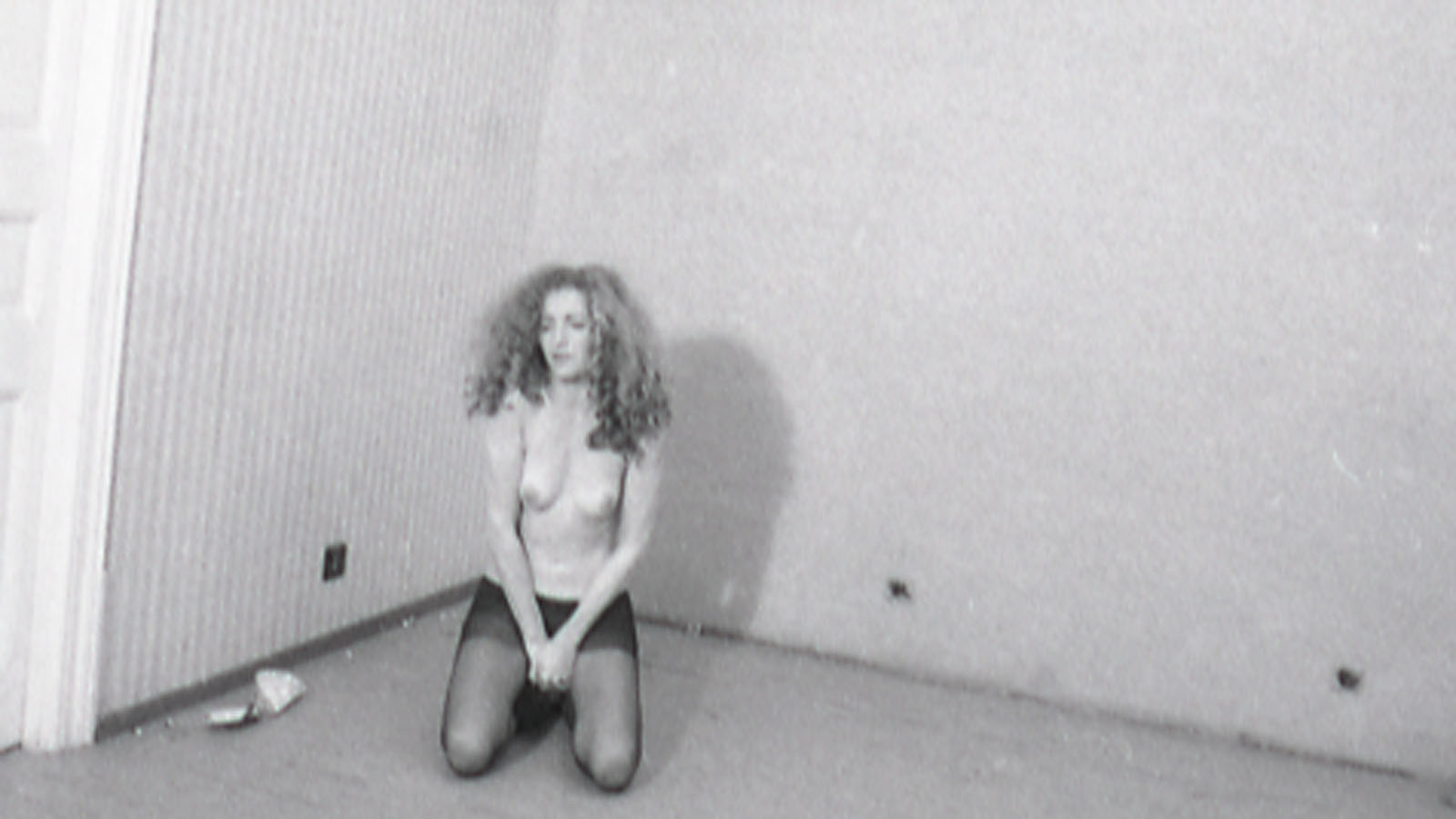 When you finish a film, it becomes like an object that doesn’t belong to you anymore. The critics and public at large can comment on it, and it’s amazing to learn what people feel about it and how they can see it differently. Their interpretations or questions always astonished me.

There is a good reason that I announce in the first shot of Deux fois that “Tonight”—and the film itself—“will be the end of all meaning.” It was so people could feel free to let go and see what they wanted, and have so many different opinions.

For me, making films is about the efforts and the collaboration of the team working with me—we are the filmmakers together. It all begins with the script, but for Deux fois, I had no script, just a few notes and the location. In a way, the city of Barcelona, where we had chosen to shoot, was itself like one of the main actors, beside Francisco Viader and me. The DP, André Weinfeld, understood what I wanted and gave me a crisp black-and-white image. André had shot Philippe Garrel’s Marie pour mémoire, that’s why I choose him and trusted him. And, indeed, the photography of that film did inspire me, as did Jean Cocteau’s The Blood of a Poet.

Personally, I cannot not speak about the “message” of Deux fois. Given all the freedom I had from Sylvina Boissonnas, our patroness who gave us all the money without asking to read a script, or for some kind of obligation to make the product commercial, I felt totally free during the film’s production to shoot what I wanted.

The filming was a bit like making a Polaroid with long shots, similar to Andy Warhol’s screen tests. Also, when almost every take is 10 minutes long and shot on location, there is always something unexpected happening to make a scene feel more real, more interesting.

That why I think Deux fois is kind of unique in its presentation. It’s in the genre of the film diary, capturing an unfinished love affair with a city, but because I use the 35mm format, it looks classier than it would have if shot on video or 16mm, and most of the shots were done using a fixed tripod. 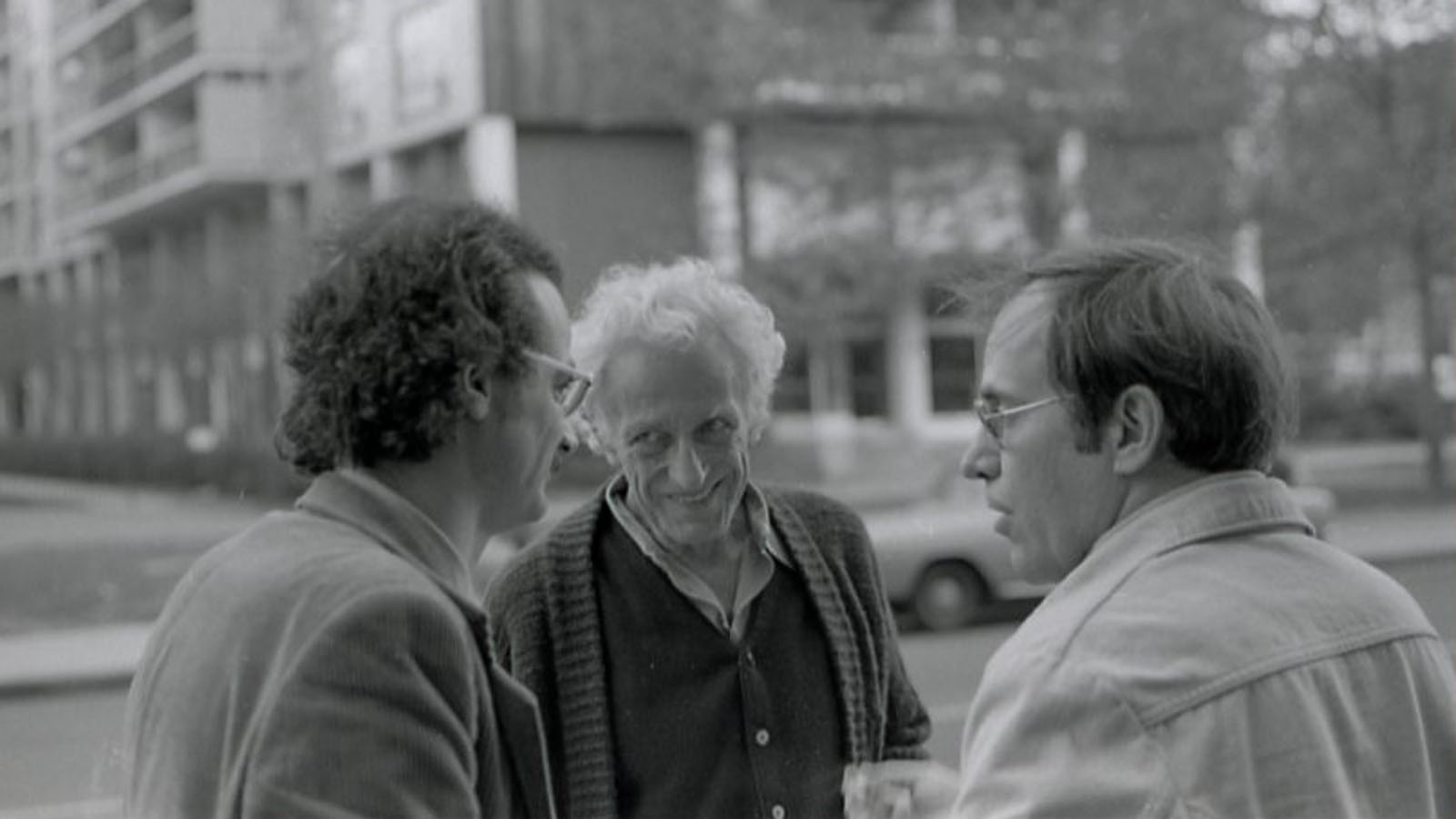 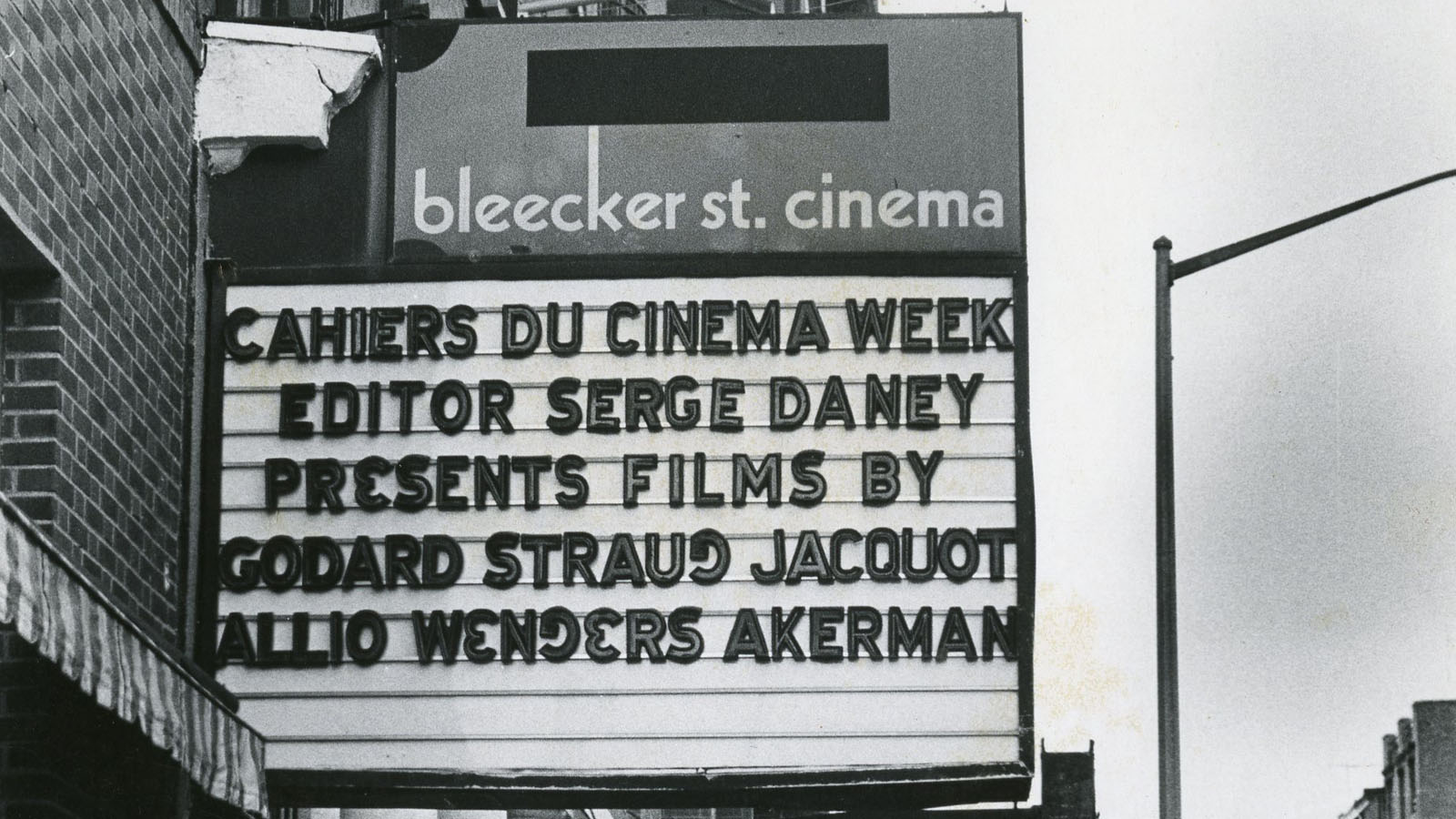 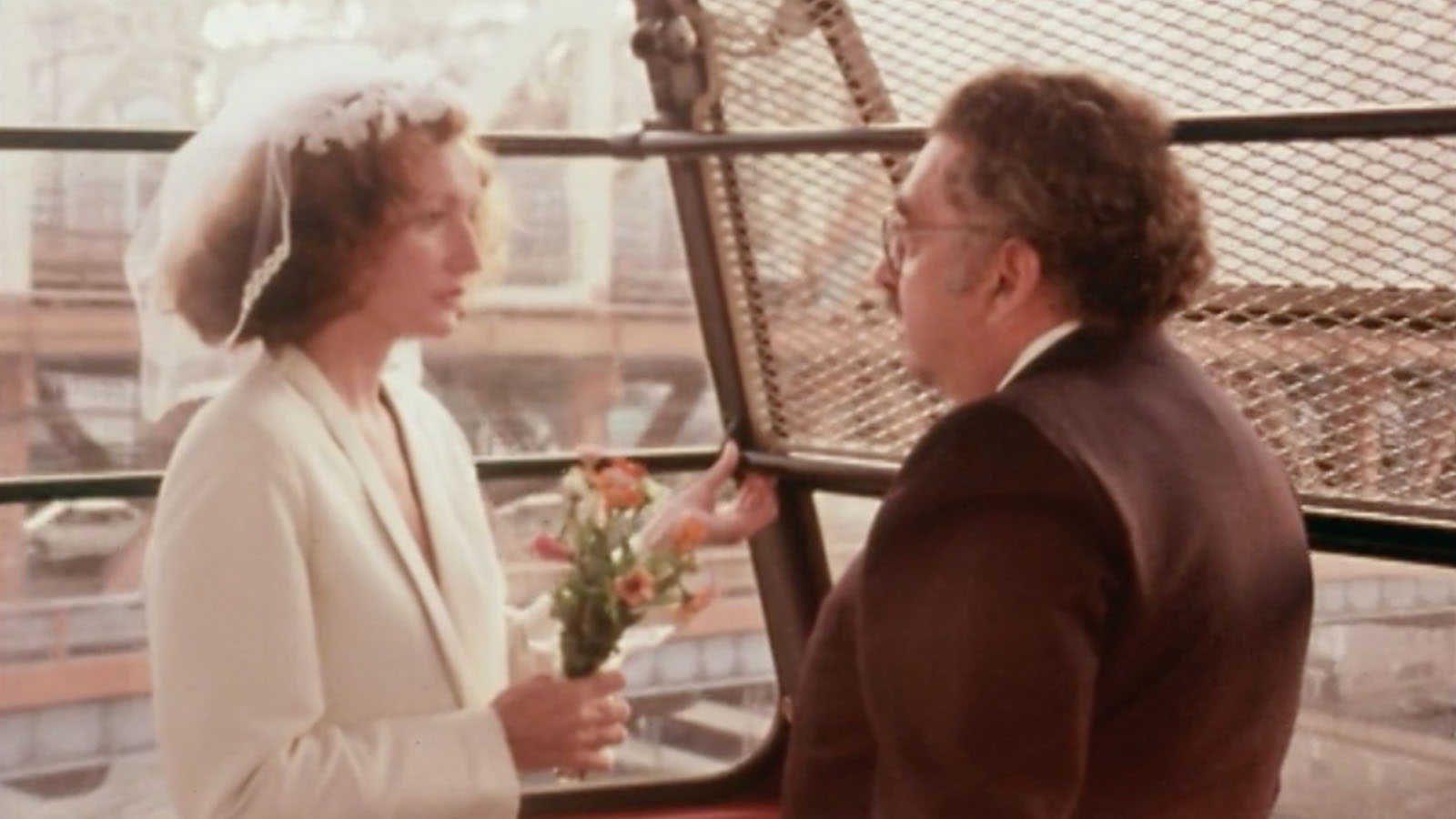 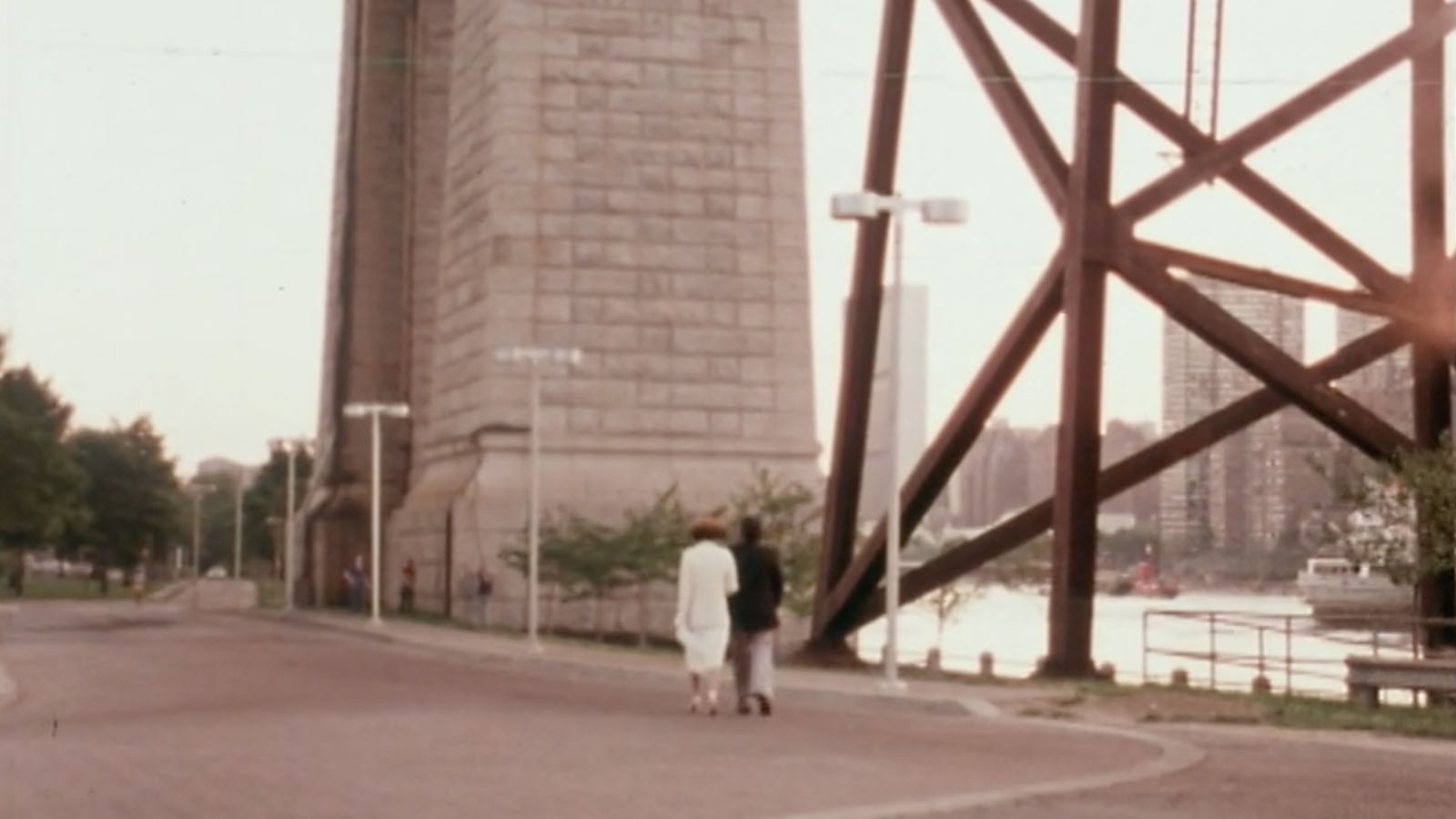 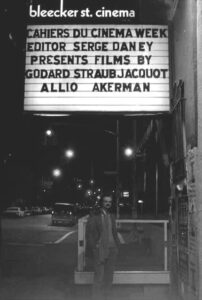 During the first Cahiers du Cinéma festival at the Bleecker St. Cinema, I photographed
Serge Daney, the chief editor of Cahiers, in front of the cinema marquee. Serge chose all the programs, and because, to me, all the directors were real auteurs, I was thrilled to premiere their films not yet known to the New York public. Serge also introduced all the screenings that week.

The photo of Serge is also tells the story of a Manhattan location in the late ’70s. I was familiar with Greenwich Village, because when I first came to New York I lived on LaGuardia Place at the corner of Bleecker Street. It’s also a night shot, which gives you the feeling of the lonely ambiance, with only one car passing by and no pedestrians. 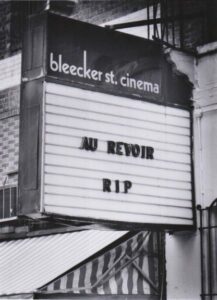 That Bleecker St. Cinema itself has a history. James Agee lived a few blocks away, as did Alexander Calder, in a brownstone on MacDougal Street. A block west of the movie theater was the jazz club The Village Gate, a wonderful place to listen to music late at night.

When Godard’s Numéro Deux was projected during the Cahiers du Cinèma festival, Nicolas Ray came to watch it. He found the film, in its kind of patchwork composition, similar to his own film We Can’t Go Home Again, because it shows different images from a number of television screen. Sid Geffen, my husband and partner, could not believe that the Cahiers du Cinéma week was so successful, that every evening the theater was sold out. But Serge was doing brilliant introductions at each show and the reviews were good, specifically Jim Hoberman’s in The Village Voice. Sid was asleep for most of the screening of Marguerite Duras’ India Song, but he still loved the film and decided to buy it. He told me that he liked to close his eyes during a show, and listen to the soundtrack, rich with many layers of music, sound effects, and dialogue. •