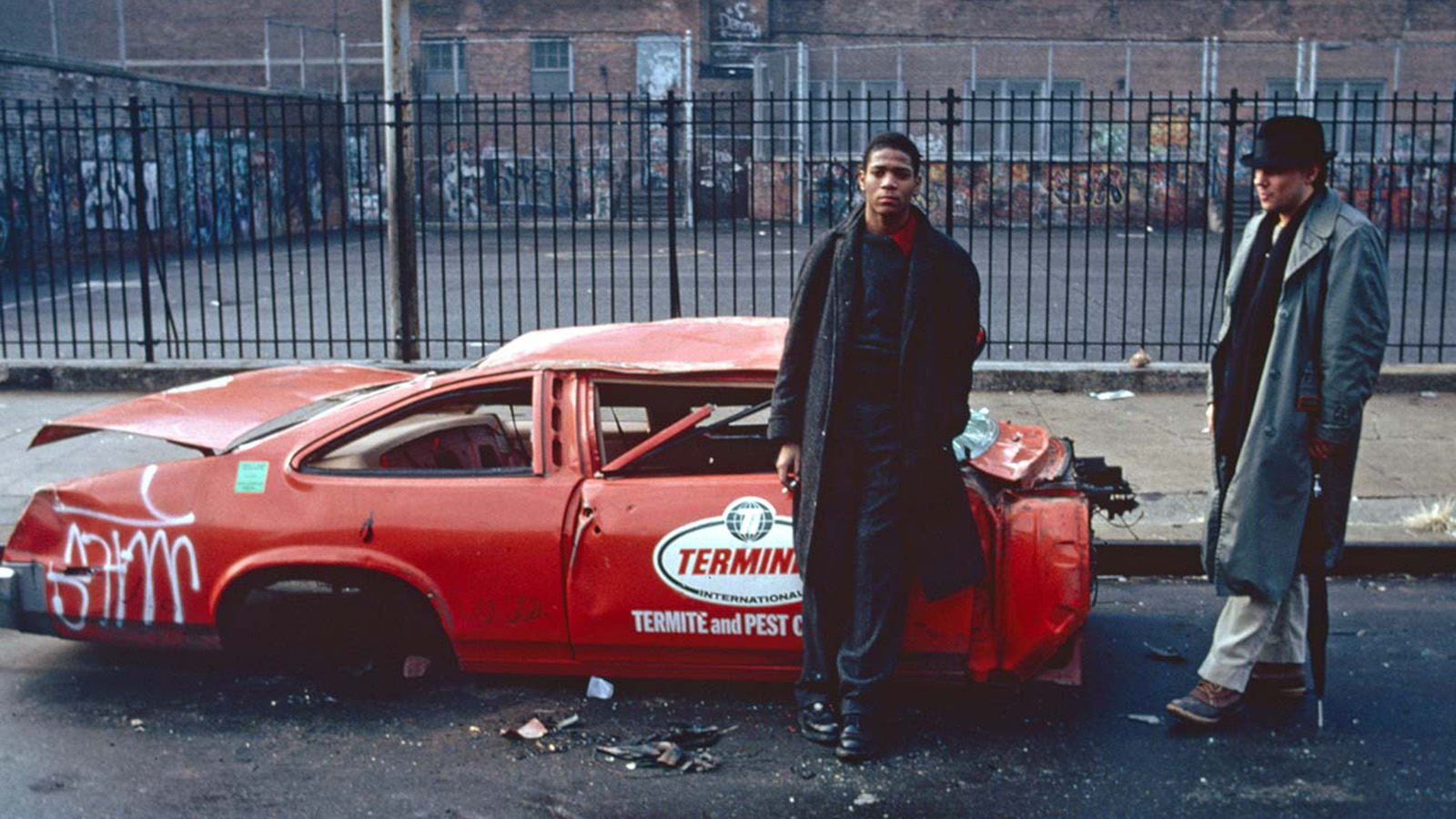 This piece was originally published on October 29, 2019.

Introduced as a fairy tale, Downtown 81 provides a vision of Lower Manhattan’s New Wave art and music scene that, nearly 40 years after the film was shot, is as evocative of what this writer remembers of the place where she worked and lived as those in such celebrated documentaries as Charlie Ahearn’s 1983 Wild Style and Sara Driver’s 2016 Boom for Real: The Teenage Years of Jean-Michel Basquiat.

Director Edo Bertoglio and cameraman John McNulty knew where to put the camera to show off the graffiti-laden walls that rose out of the rubble of the Lower East Side and East Village. But by far, writer Glenn O’Brien’s greatest coup was casting 19-year-old Jean-Michel Basquiat as our guide to a charmed moment when the meeting of punk, hip-hop, graffiti, and beat expressionism began the cultural transformation that we understand today as the last stand of DIY, personal, private, and hand-made art against a homogenized digital future.

If you want to see a documentary about Basquiat, Boom for Real and Tamra Davis’s 2010 Jean-Michel Basquiat: The Radiant Child are far more informative. What makes Downtown 81 extraordinarily poignant is that no one involved in the film—and probably not even Basquiat himself—had an inkling that the graffiti writer known as SAMO© would become the greatest visual artist of the last quarter of the 20th century, and that in the next eight years he would produce over 1,000 paintings and an equal number of drawings before dying of a drug overdose in 1988. But that is not to say that Basquiat was ever unsure of his talent, nor that O’Brien, one of the great art and cultural critics, was unaware of his promise when he built his script around him.

We first see Basquiat waking up in a hospital bed. He has no idea why he’s there and neither do we, but the staff soon tells him that he’s good to go, and he lopes down the stairs and out onto Fifth Avenue. A lovely looking teenager with shoulder-length dreads, dressed in a preppy crew neck sweater, he moves as lightly and fluidly as a dancer. He walks downtown on the Central Park side of the Avenue, past the Guggenheim and the stately mansions, until, through the magic of editing, he suddenly finds himself in the Times Square district, its littered streets lit with the neon signs of porn parlors.

FAIRY TALE OR DREAM, DOWNTOWN 81 ISN’T MUCH OF A NARRATIVE; ITS PLEASURES LIE ELSEWHERE. 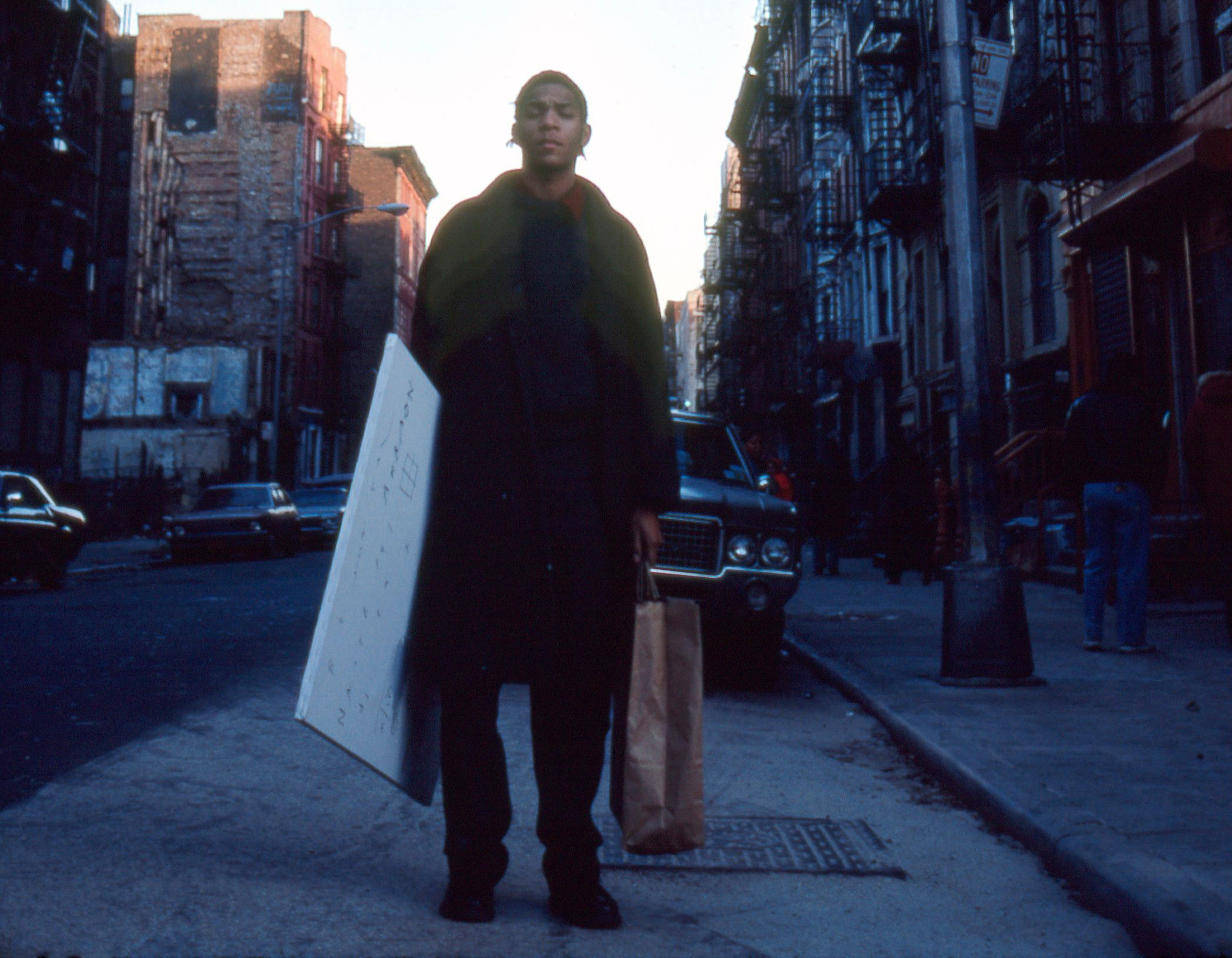 As he walks, he muses in voiceover and this is where Jean-Michel Basquiat becomes more fiction than fact. In the years between the shooting of Downtown 81 and the movie’s post-production supervised two decades later by Maripol, the dialogue elements were lost. Because Basquiat had passed away, the words that O’Brien had written specifically for him were rerecorded by the slam poet Saul Williams. Basquiat arrives downtown to tag a wall or two with the cryptic phrases that soon made their way into his paintings. He encounters a beautiful young model driving a convertible and accepts a ride. Throughout the movie, he will half-heartedly try to connect with her, until he thinks the better of it, preferring to walk the mean streets of Manhattan by himself.

And make no mistake, the streets were mean. By the mid-1970s, New York was in a financial meltdown. Of course, the Upper East Side neighborhood where Basquiat begins his long walk home was clean and as safe as any neighborhood can be in a city with a large gap between rich and poor. The difference between New York in 1980 and New York today is that the neighborhoods of the city populated by people who were poor and middle class have almost disappeared as Manhattan has been gentrified, bought up by real estate developers who’ve built expensive condos and rental buildings, often luring wealthy customers with claims that these still are artist—i.e. cool—neighborhoods, which is a crock, because no young artists, musicians, filmmakers, coders, hackers, dancers, or skaters can afford to live in them. What makes Downtown from circa 1964 to 1984 so fascinating—indeed, mythic—to an emerging creative generation and its audience is that cheap rents allowed people to live like outlaws and to build their own outlaw communities in which they could literally make their mark.

The first time I saw the tag SAMO© was on the door of a garage opposite the co-op on Wooster Street in Soho where I’ve lived since 1972. That garage was demolished and replaced by a condo building in which the penthouse sold for $35 million. Basquiat lived, briefly and usually rent-free, in various Soho spaces, and in the late ’70s, he sold postcard-sized paintings and drawings on the street for whatever he could get. I thought they were extraordinary, and I would buy one whenever I ran into him. His line, which combined the childlike and the extremely sophisticated, was like nothing I’d ever seen. The only Basquiats I could afford were stolen during the first and only open door party I threw. 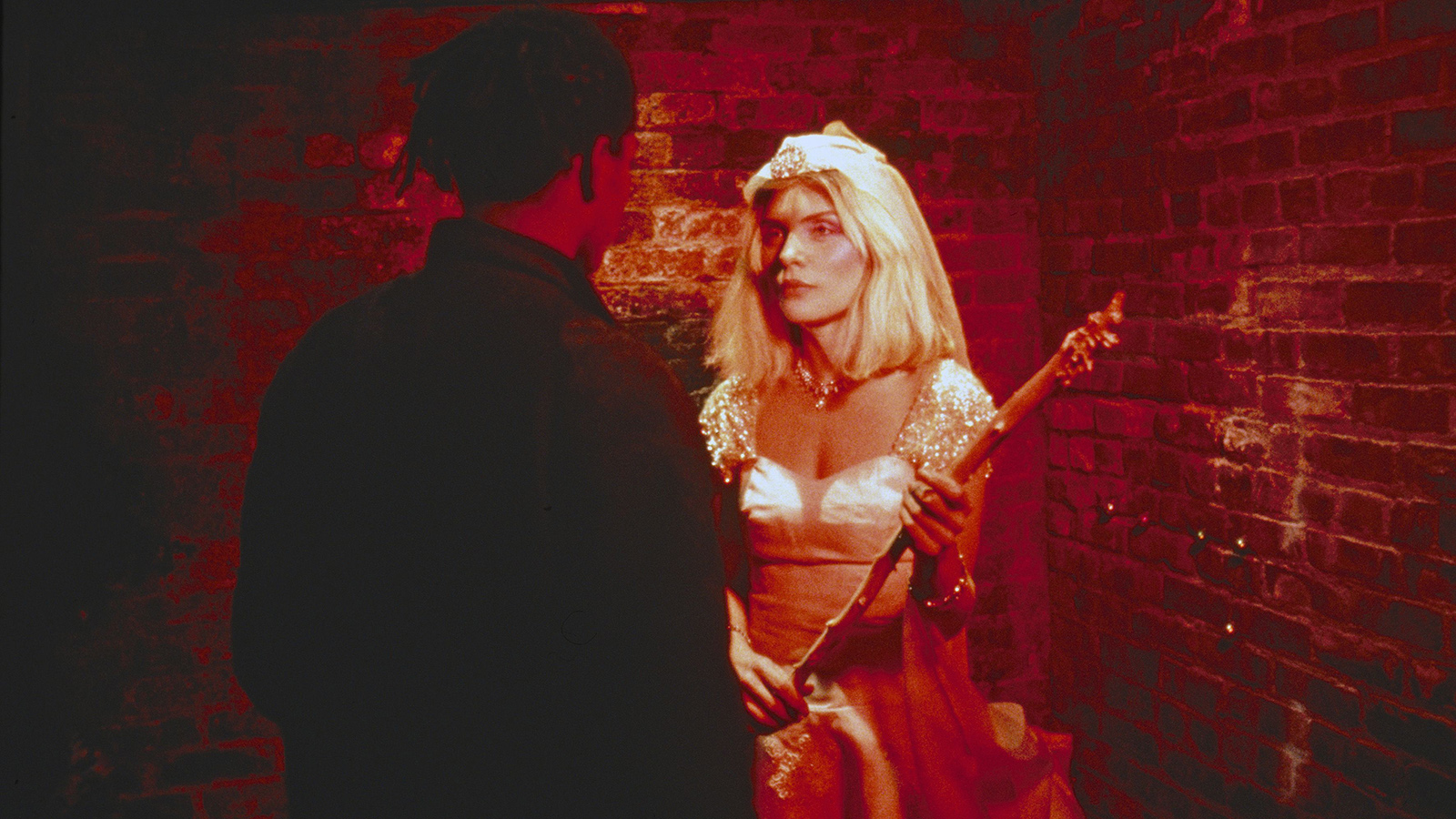 All this is to say that the community of outlaw, DIY artists was not always kind. In Downtown 81, Basquiat arrives at his LES walk-up to discover that his landlord has locked him out for non-payment of rent, and that the equipment his band Gray needs for its gig the next night has been stolen by a band that plays in the same club. For the rest of the film, he wanders from club to club, trying to track down the missing speakers and amps.

Finally, in a dark alley, he is hailed by a bag lady, who has bedded down on a heap of garbage. She is played by Deborah Harry, the lead singer of Blondie, and her brief performance is jaw-droppingly fierce and lewd. She demands a kiss from Basquiat. He reluctantly obliges, and then as he wipes the smeared lipstick from his mouth, she turns into a princess, replete with gilt tiara and magic wand, the kind of finery one could acquire in Trash and Vaudeville on St. Marks Place. Stumbling from the alley, Basquiat trips over a briefcase stuffed with cash, which he uses to buy a car. As he leaves Manhattan behind, he says that he felt he like he was driving to the end of a dream.

Fairy tale or dream, Downtown 81 isn’t much of a narrative; its pleasures lie elsewhere. Besides the haunting presence of Basquiat, there are cameos by such legendary figures as Michael Holman, Basquiat’s musical collaborator in the band Gray; Mudd Club owner Steve Mass (the Mudd Club sequence captures the zoned-out insanity of the place); and hip hop and graffiti artist Fab 5 Freddy hanging out with graffiti artist Lee Quinones. The soundtrack features Suicide, John Lurie and the Lounge Lizards, The Plastics, Tuxedomoon, The Specials, Lydia Lunch, Melle Mel, Chris Stein, Blondie, Vincent Gallo, and more. Miraculously, the sound for many of the live bands gigging in the clubs that Basquiat visits was not lost, and it is brilliantly recorded. There are extended electrifying performances by Kid Creole and the Coconuts, James Chance in his James White & The Blacks period and Arto Lindsay with his trio DNA. Lindsay’s percussive, scratched guitar riffs are the musical equivalent of Basquiat’s line.

These bands were as much an inspiration for O’Brien’s concept of the film as was Basquiat’s visual art. They are inseparable. The images of these bands playing in legendary, long vanished clubs, and of Basquiat writing his fragmentary poems on crumbling walls, make Downtown 81 a necessary, often amazing document of New York New Wave. 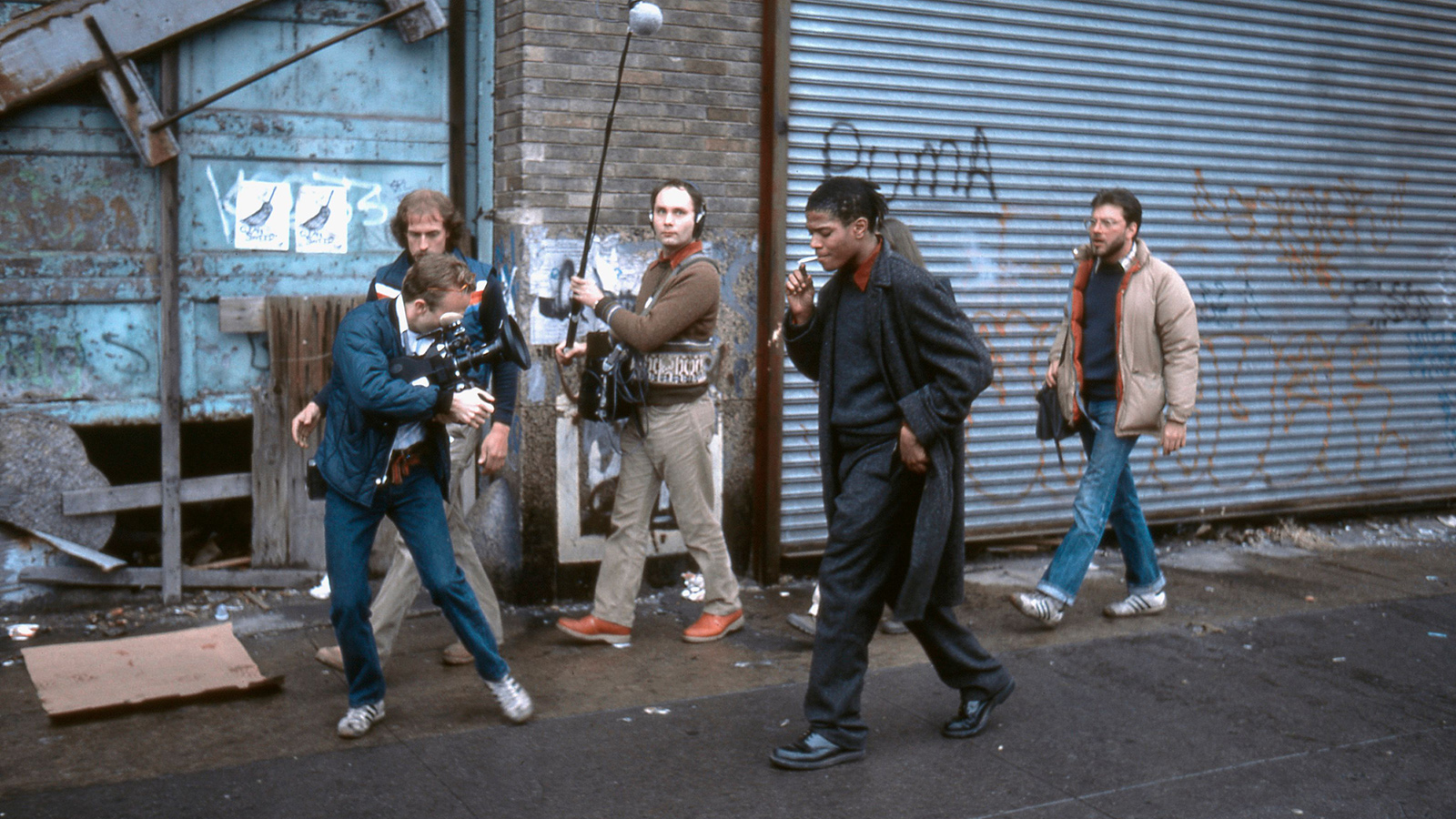