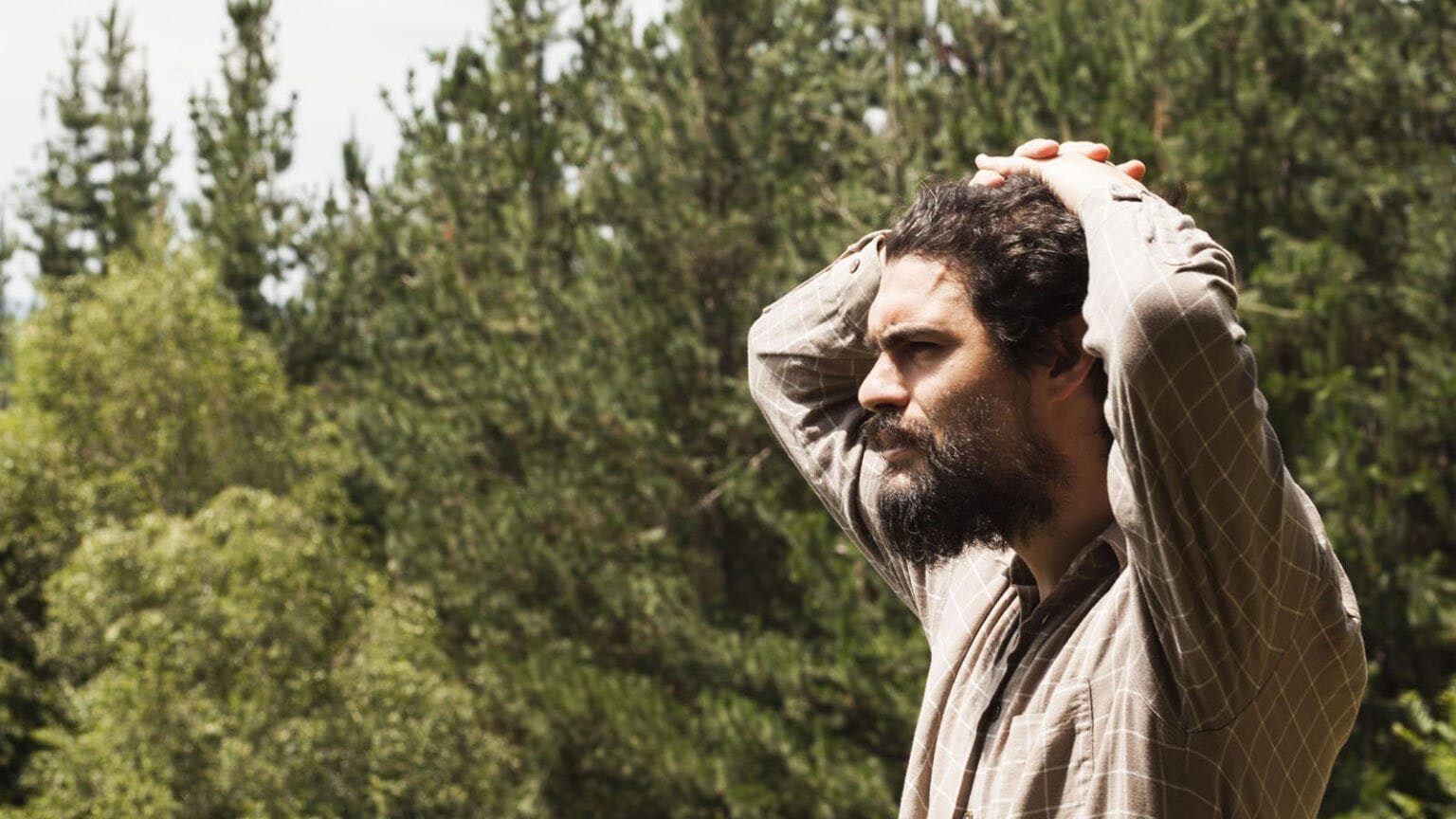 The director talks about his powerfully meditative third feature, Fire Will Come, for which he returned to his roots to make. 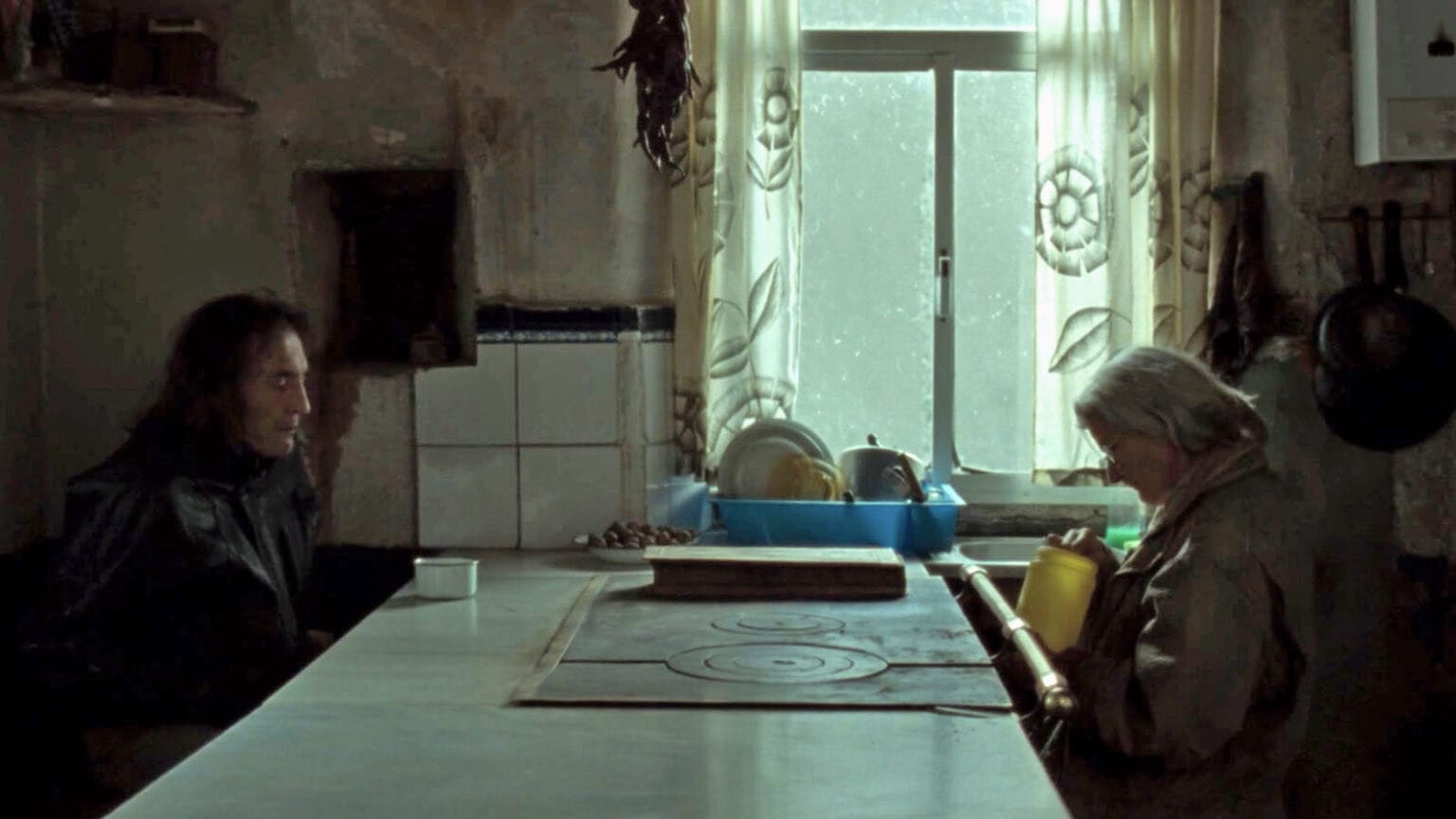 After spending a decade in Morocco, where he made the leap into feature filmmaking with You All Are Captains (2010) and Mimosas (2016), Paris-born Oliver Laxe turns his camera onto his ancestral home of Galicia in the slow-burn, meditative Fire Will Come (2019). Set amid lush mountain landscapes captured across seasons, the film immerses us in the rituals of rural life through the story of an octogenarian mother (Benedicta Sánchez) and her middle-aged son (Amador Arias). Freshly released from prison after serving two years on an arson charge, the introverted and enigmatic Amador attempts to readjust to his old existence, but it’s only a matter of time before a new fire breaks out and wrecks the countryside.

I spoke with Laxe about the autobiographical elements that permeate Fire Will Come and his process of crafting the movie’s alternately naturalistic and stylized aesthetic.

IN INTERVIEWS YOU GAVE ABOUT MIMOSAS A FEW YEARS AGO, YOU ANNOUNCED AS YOUR FOLLOWING PROJECT A PSYCHEDELIC ROAD MOVIE THAT WOULD TAKE PLACE BETWEEN FRANCE, MOROCCO, AND MAURITANIA. WERE YOU ALSO DEVELOPING FIRE WILL COME ON THE SIDE, OR DID IT STEM FROM A MORE IMPULSIVE DECISION TO RECONNECT WITH YOUR GALICIAN ROOTS?

It’s true that I initially wanted to follow up Mimosas with the psychedelic road movie, which I’ve been carrying inside of me for a very long time. But Mimosas was my first industrial filmmaking experience, and I felt a bit tired afterward. Artists are like sensitive membranes—we’re capable of moving from one psychological extreme to another, from being a monk to being a terrorist, if we don’t monitor ourselves. And that’s why I decided to go back home to Galicia, to the village where we shot Fire Will Come, and where I am currently speaking to you from. For me, Fire Will Come is part of a life choice—I chose to build my house in this valley and to abandon myself to the moment in order to gather up enough energy to make the road movie, which involves a celebration of excess, though it is a spiritual journey at heart.

WHAT YOU SAID ABOUT THE AMBIVALENT NATURE OF ARTISTS MADE ME THINK OF FIRE WILL COME’S PROTAGONIST, AMADOR. I WAS STRUCK BY HIS SIMULTANEOUS DEPICTION IN THE FILM AS A FUNCTIONAL INDIVIDUAL AND A DAMAGED ONE.

My goal as a filmmaker is not to judge my characters, but rather to imbue them with the contradictions and paradoxes of every human being so that the audience can empathize with them. In the movie, as in real life, Amador is someone with a heightened sensitivity, who surrounds himself with a protective shell to avoid being crushed by the forces of modernity. Artists are also borderline people, and I do believe we would sink into distress if we didn’t make art, which is a tool of adaptation and empowerment through which we heal our wounds. 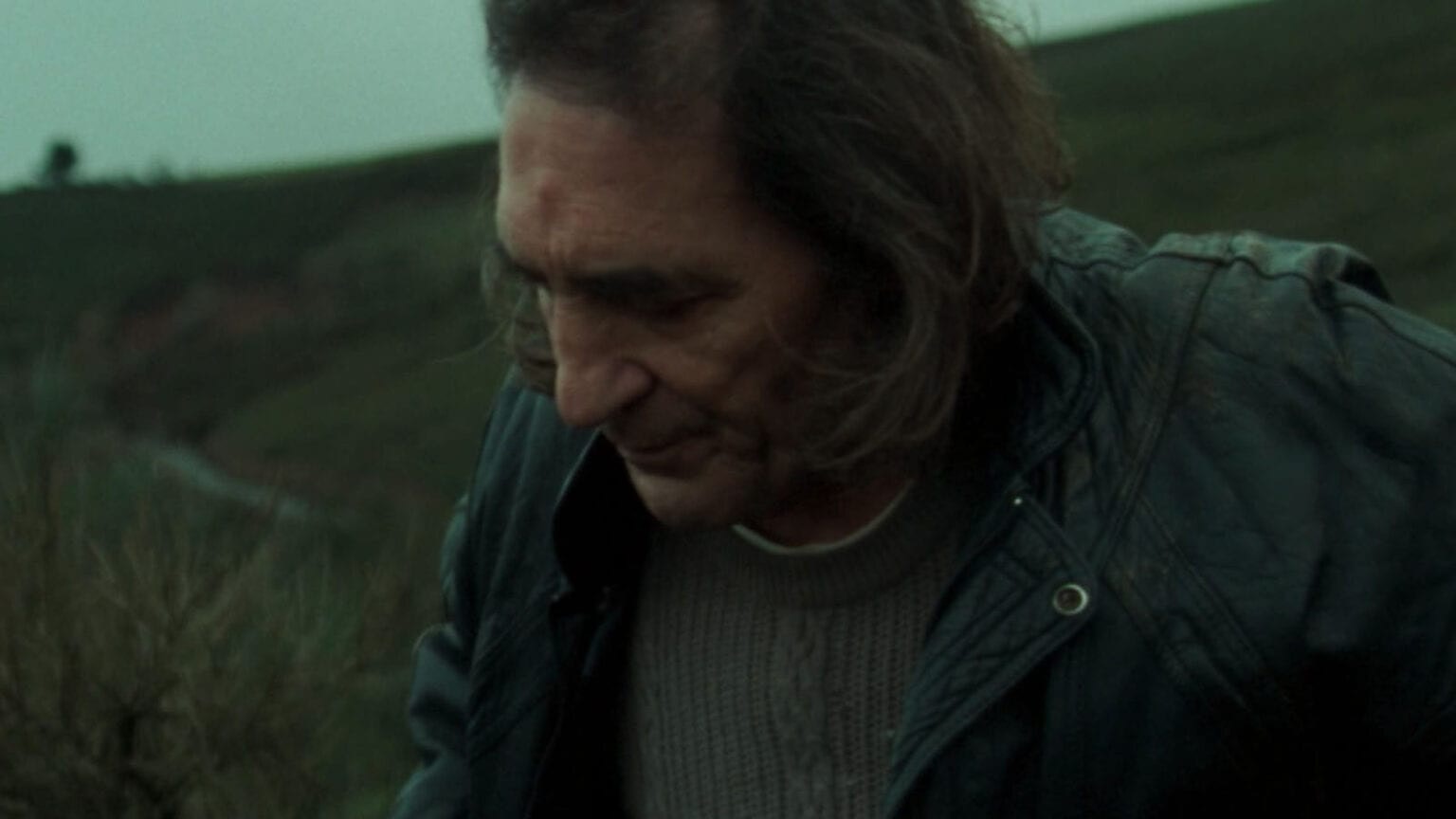 IN YOUR DIRECTOR’S STATEMENT FOR FIRE WILL COME, YOU POINT OUT THAT UNLIKE AMADOR, THE FICTIONAL BENEDICTA IS VERY DIFFERENT FROM THE REAL ONE. DID YOU INVEST THAT CHARACTER WITH MEMORIES OF YOUR OWN GRANDPARENTS, WHOM YOU GREW UP AROUND?

My family has always shown an attitude of acceptance and determinism toward nature, which I like to call “sovereign submission,” and which I think characterizes country folk all around the world. When nature tells you every day that you’re small and insignificant, you develop a mixture of strength and gentleness that makes you free, or at least psychologically uncluttered. But there are also people who find freedom in saying “No” and in defending their rights, and this was the real Benedicta’s case. Benedicta is a very healthy and intelligent octogenarian with a high energy level and some amateur theater experience, so she had a tendency at first to overplay her role. But I didn’t want the audience to think that she was a castrating mother responsible for her son’s emotional baggage. So we worked on dialing down her performance, which actually brought us closer to her true essence.

The mountains of Galicia are the first to have emerged in the Iberian Peninsula, so they’re very old, round, and eroded. There’s something maternal about them, in the sense that they’re very soothing and welcoming, whereas the mountains of Morocco are very rough and rugged—you can see the layers of sedimentation and the violence inherent in them. I approached the landscape similarly on Mimosas and Fire Will Come, with a desire to honor it and defend its fragility. But the difference is, of course, my autobiographical relationship with the locations of Fire Will Come, which pays tribute to my family’s values. I was very conscious of shooting in a place where generations of my ancestors were born, and lived and died.

FIRE WILL COME IS BEING PRAISED FOR ITS ALLEGORICAL OPENING SEQUENCE, IN WHICH A PLANTATION OF EUCALYPTUS TREES IS BRUTALLY WIPED OUT BY BULLDOZERS IN THE DEAD OF NIGHT. CAN YOU TALK ABOUT HOW YOU CAME UP WITH THAT APOCALYPTIC IMAGERY?

After my first feature, You All Are Captains, which took place in Tangier, I moved to the south of Morocco, where I lived in a palm grove for four years, and where Mimosas was shot. There, I heard about the existence of a local mafia whose members came to the oasis at night, unearthed the roots of hundred-year-old palm trees, and tore them off with chains, then sold them on the black market to wealthy people in Casablanca and Marrakech. I even wrote a treatment for a film about those traffickers, which never materialized, but the nocturnal image of the trees and the machine that pulls at them until they collapse continued to inhabit me and found its way into Fire Will Come. That sequence also embodies the essence of my own personality—this wild, Dionysian energy boiling in me and conveyed on screen through the destruction of a plantation of eucalyptus trees.

“MY GOAL AS A FILMMAKER IS NOT TO JUDGE MY CHARACTERS, BUT RATHER TO IMBUE THEM WITH THE CONTRADICTIONS AND PARADOXES OF EVERY HUMAN BEING SO THAT THE AUDIENCE CAN EMPATHIZE WITH THEM.”

HOW DID YOU ORCHESTRATE THAT MASSIVE DESTRUCTION?

I was very well supported by my producers, who understood that this sequence was crucial to the movie, even though it had no narrative connection with the rest, and it would cost a lot of money and take several days to shoot. We used drone cameras for security reasons, which lent the images an ethereal, dreamlike quality, and no special effects—what you saw are actual 20-ton trees falling down.

WHILE SERVING AN EXPOSITIONAL PURPOSE, THE FOLLOWING SCENE IS ANOTHER STYLISTIC SET PIECE—THE CAMERA FOLLOWS AMADOR’S CASE FILE AS IT IS TOSSED FROM HAND TO HAND IN AN OFFICE, AND WE HEAR THE VOICES BUT DON’T SEE THE FACES OF THE BUREAUCRATS WHO WORK THERE.

I don’t like bureaucrats. [Laughter] I mean the archetype of the bureaucrat, that is to say someone who puts themselves at the service of evil in a lazy and cowardly way. But the scene was staged as such for the sake of visual economy, and I think it owes a lot to Bresson, even though he said he wasn’t keen on wielding the camera “like a broom.” And from a dramatic standpoint, we wanted to give some information about Amador’s past and establish the stakes right away. Is this man really going to be able to adjust to life after prison? When and how will the fire come?

THE FILM’S FRENETIC FINAL 20 MINUTES, WHICH DOCUMENT AN ACTUAL FIREFIGHTING OPERATION, MARK A RADICAL DEPARTURE FROM THE INTROSPECTIVE MOOD OF AMADOR AND BENEDICTA’S STORY.

Fire Will Come was initially going to be a parallel narrative set on both sides of the mountain. On the one hand, there would be Amador, and on the other, a young fireman with a brighter personality. But I never encountered a fireman who could carry a leading role, so Amador got the upper hand. My co-writer Santiago Fillol and I structured the screenplay around three movements. The first one, epitomized by the opening sequence, is climactic and transcendental, like an adagio, and propels the second, less eventful movement centered on the mother and the son, in which we allowed ourselves to stretch out time. Then the third movement begins when Amador crosses paths with the firefighter brigade on the road, and we leave him behind and start following them. But this was a risky bet because we could lose the audience, and that’s why we included the scene with the injured horse that comes out of the ruins of the fire—to ground the movie back into reality and make us feel the weight of the tragedy.

TELL ME ABOUT THE ARTIST-IN-RESIDENCE PROGRAM YOU ARE LAUNCHING IN LUGO, THE REGION WHERE FIRE WILL COME WAS SHOT.

I’m turning my grandparents’ house into a rural development center for artists. The program is about reconnecting with one’s inner self, and it has an educational component, with farming and agriculture courses. There is also a film club, which will bring together the local community, and where I’m hoping to catch up with all the movies I missed over the last 10 years. [Laughs] The project is really a product of my desire to settle down here, take in the history of this valley, and put soup back on my grandparents’ kitchen table.

YOU’RE UNCLOGGING THE WELL, AS AMADOR DOES IN THE FILM.

Yes, you might say that. But I think this place has always been a very fertile fountain. It’s I, rather, who has dry lips and needs to drink from this infinite, eternal spring. • 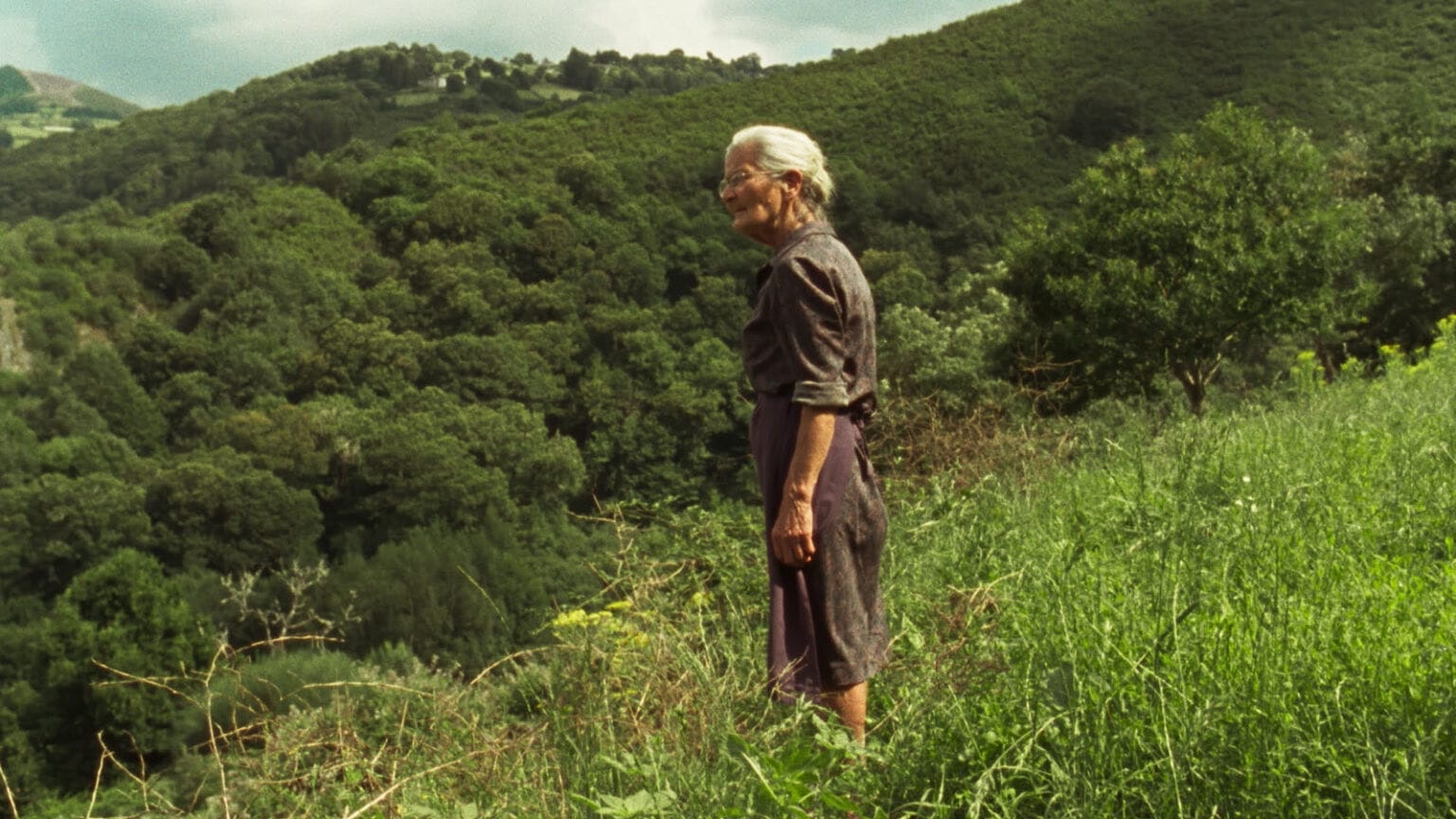