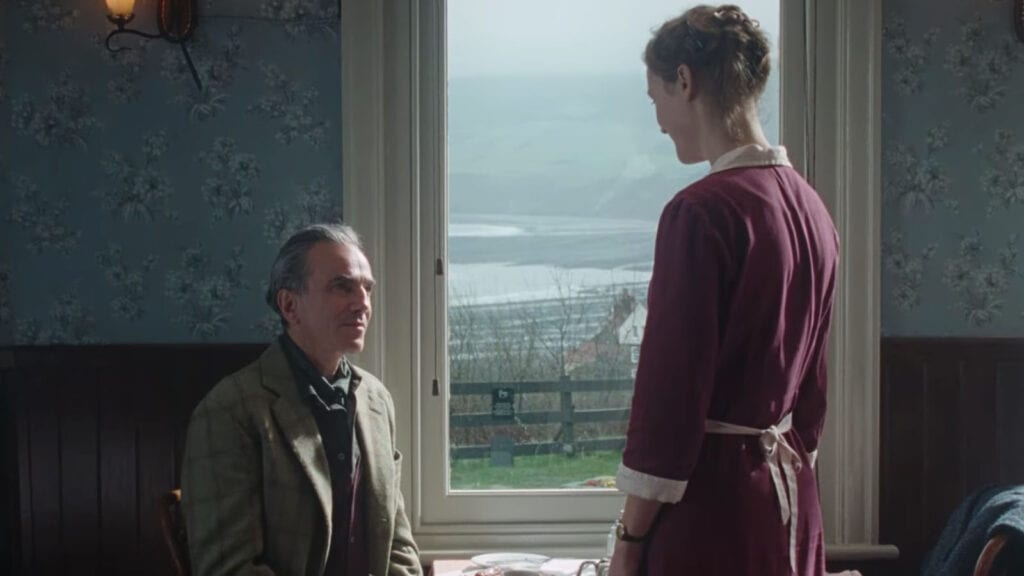 On the holiday spirit of Paul Thomas Anderson‘s Phantom Thread. 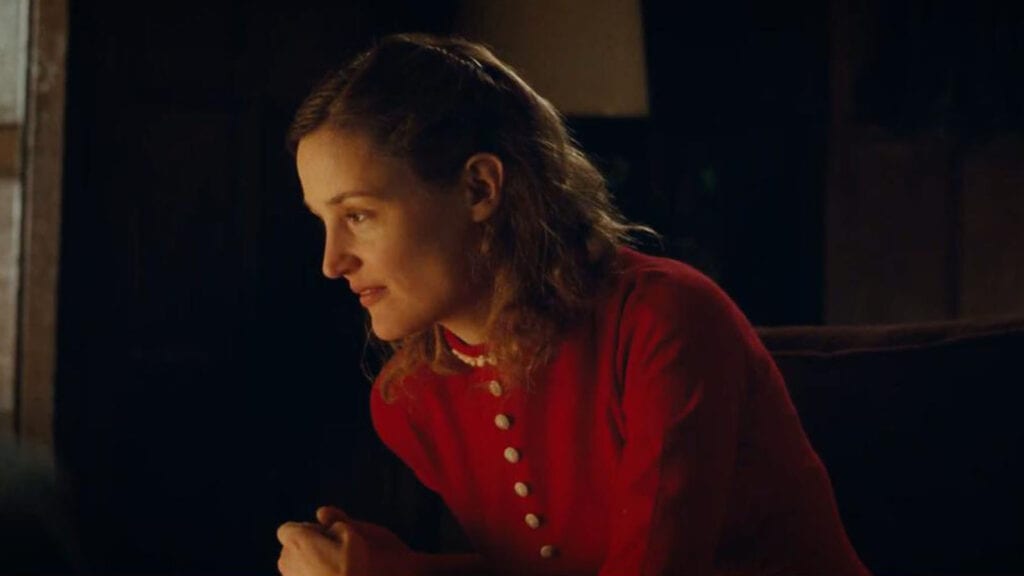 The first time the curmudgeonly couturier Reynolds Woodcock (Daniel Day-Lewis) meets his to-be muse and eventual wife Alma (Vicky Krieps) in Phantom Thread, it is at the restaurant where she is a waitress. Woodcock, the “hungry boy,” arrives with a voracious appetite and seats himself by a window with a clear view of a chilly winter day. Spotting the well-coiffed, impeccably dressed gent, Alma fumbles and trips while carrying a plate of toast, causing her rosacea to flood her cheeks, nearly spilling over to her ears. It’s the only instance where Alma’s pigment is that vibrant, yet in my (literal) rose-colored memory of Paul Thomas Anderson’s latest feature, I remember her with a perpetual wintry flush, a natural après-ski glow.

Phantom Thread screened last year as part of Metrograph’s annual holiday series, and though the Christmas and New Year’s scenes are relatively brief, the film is the cinematic equivalent of foggy breath on a brisk December morning. Alma’s presence, bashful and blushing, is like the fireplace flame she sits in front of in the opening scene, a scene subsequently threaded throughout as narrative wrap-arounds. In these sepia-toned frames, flickers of light dance across her face, the soft crackling sounds of the fire rendering her hard-to-pin-down European accent (Krieps hails from Luxembourg) even more hypnotic as she explains their complicated relationship in a playful whisper. Her face, even as she speaks of the challenges of being with Woodcock, is mesmerizingly serene.

Why does Phantom Thread embody the holiday spirit so comprehensively? Because Alma’s presence feels like Christmas. She often wears holiday-appropriate red—the maroon waitress uniform, the mistletoe-red mock turtleneck dress she wears on their first date, the Woodcock original she models at his fashion show (the same color as her waitress outfit), and the square-collared short-sleeve dress of a darker crimson shade that she wears when surprising Woodcock with an all-too-buttery dinner that becomes the first explosive crack in their relationship. (Funny enough, she goes for a brassy palette during the Christmas dinner scene—where there’s another huffy fight between the two, now spouses, leading to a New Year’s Eve party Alma rebelliously runs off to sans husband.) Like her sartorial shade of choice, Alma is a warm, peachy balm that infiltrates the uptight iciness of the House of Woodcock, occupied by Reynolds as well as his sister, Cyril (Lesley Manville), the real Alpha of the duo, who runs not just the business side of the couture label but also her brother’s personal affairs.

WHY DOES PHANTOM THREAD EMBODY THE HOLIDAY SPIRIT SO COMPREHENSIVELY? BECAUSE ALMA’S PRESENCE FEELS LIKE CHRISTMAS.

Cyril and Reynolds share a lovingly biting relationship. Part of the addictive pleasure of watching Phantom Thread is witnessing their consanguineal dynamic—fiercely loyal, rivalrous, unbreakable. (Cyril’s best line is when she tells Reynolds, “Don’t pick a fight with me. You won’t come out alive.” He doesn’t retort, acknowledging its truth in his silence.) Alma, when she moves into these fashion quarters, elevates the psychological web of Anderson’s drama, throwing off the two-way relationship that has so far only seen a rotation of women temporarily filling the third seat. But to say that Phantom Thread is about a beautiful, kind woman who finally opens up the heart of a tortured genius would be too simple and rather inaccurate, though Alma does seem to have that kind of uplifting, comforting touch. In one of the breakfast scenes, she briefly looks up and stares at Cyril, and the Woodcock sister, disarmed, flashes back a genuine smile, the wrinkles on her face creasing in a way they’re not used to.

Alma, as it turns out, has more bite to her than she initially leads on. This particular breakfast scene is one where the previously clumsy mistress has already learned to butter her toast quietly, as to not be so distracting to her fussy lover, if that’s even an accurate term. She’s assimilated to Woodcock’s peculiar ways and has begun to learn about poisonous mushrooms and how to flirtatiously talk back. Just a little later, she’ll mirror Cyril’s unquestioned loyalty when she strips off a dress from the client Barbara Rose, who she feels does not deserve a beautiful Woodcock gown. Here, Alma’s role becomes Oedipal: she takes charge in a way that Woodcock’s mother would have, if she were alive. Woodcock’s mother, a lock of whose hair Reynolds keeps sewn into the canvas of his coat, for whom he designed a wedding dress as a child, and because of whom he hides hand-sewn, superstitious messages (“never cursed”) in the hems of his new designs, continues to haunt him. After Alma poisons him, later in the film, the mysterious matriarch appears as a specter—it’s very Ghost of Christmas Past. Alma, fleshy and real, appears in his room shortly after, as his mother remains in the background. 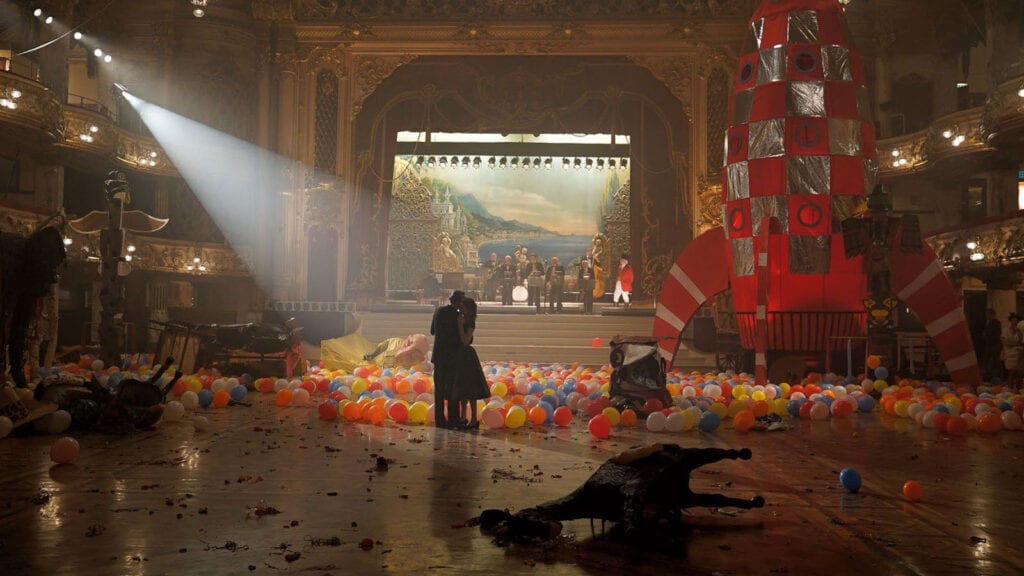 The power dynamic of Phantom Thread becomes more interesting after the grand New Year’s scene, after Woodcock pulls Alma out of the ballroom filled with floats and costumes. In the last half-hour stretch of the film, the controlling Woodcock reveals a more submissive nature, while the meek newcomer in the house asserts herself: “I want you flat on your back, helpless, tender, open, with only me to help.” It’s when Alma feels small that her rosacea noticeably returns—this happens upon the visit of a Belgian princess, a long-time client of Woodcock’s, who needs a wedding dress made. In comparison, Alma suddenly has a rashy, working-class flush. She attempts to announce her dominance by telling the princess that she lives at the House of Woodcock—as if she feels threatened in her position as the designer’s favorite muse—but the meaning of this disclosure gets lost on her Royal Highness.

The dom/sub relationship is never clear-cut—Phantom Thread reveals a new complexity on every watch—but it feels like a Christmas miracle that Reynolds and Alma have found each other, in this twisted relationship with fluid roles. In retrospect, this all-consuming affair is spelled out in the film’s opening scene, as Alma talks about the way she gives and gives and gives to him.

“Reynolds has made my dreams come true. And I have given him what he desires most in return,” Alma says, with a knowing smile.

A pause, then she lifts her head up with dignity.

“Every piece of me.”

If this kind of giving doesn’t embody the holiday spirit, then what does? •

Kristen Yoonsoo Kim is a film critic and culture writer from South Korea, currently based in New York. Her work has appeared in The New York Times, The Village Voice, GQ, and elsewhere. 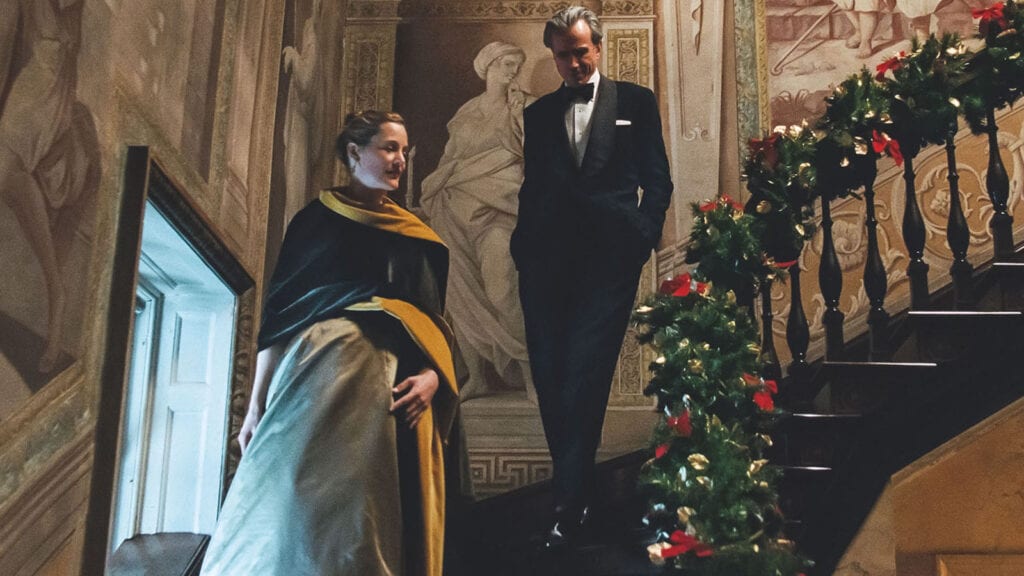