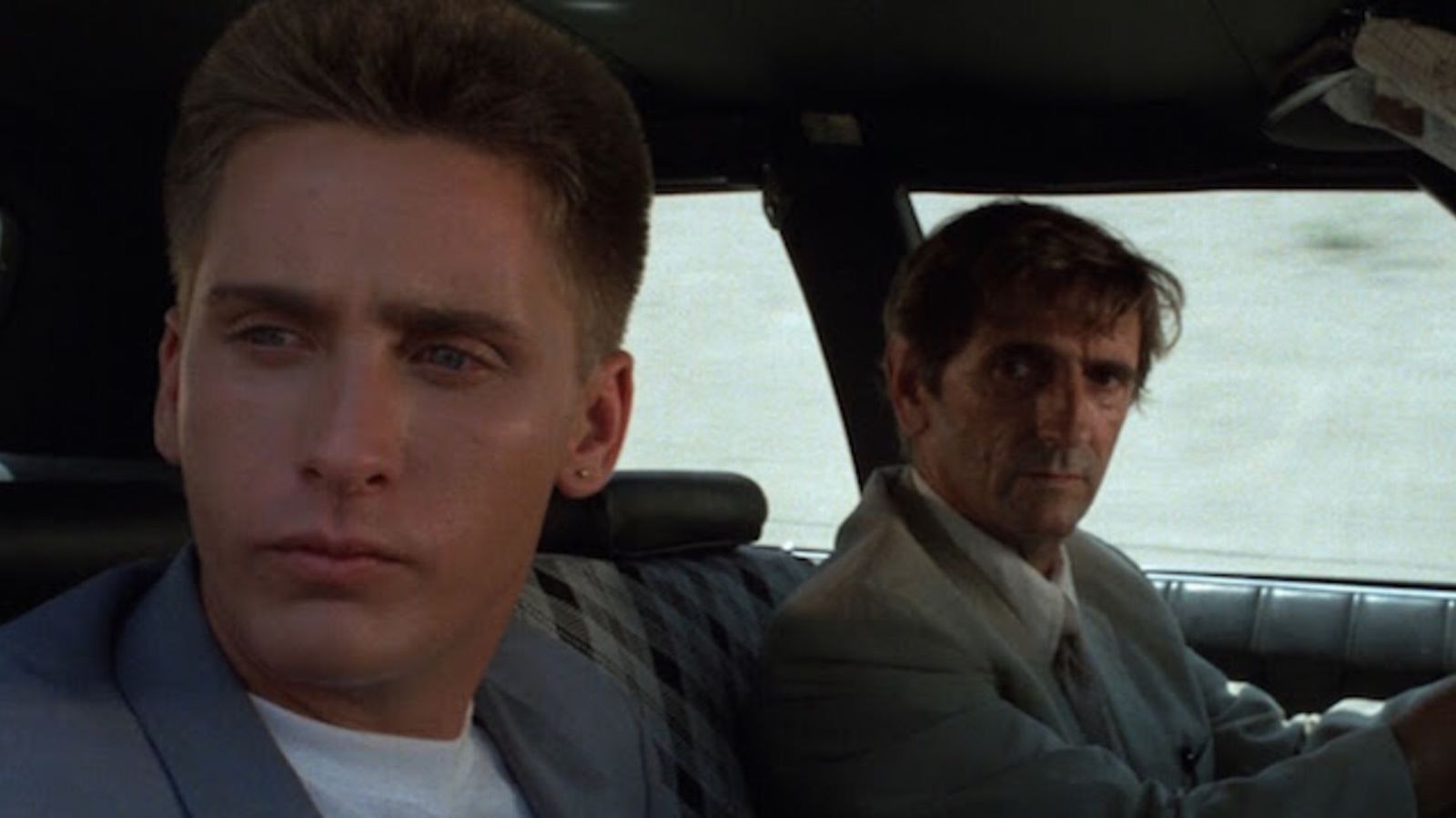 I Did It My Way

Looking back at Repo Man, an evergreen middle-finger to all the ordinary fuckin’ people out there. 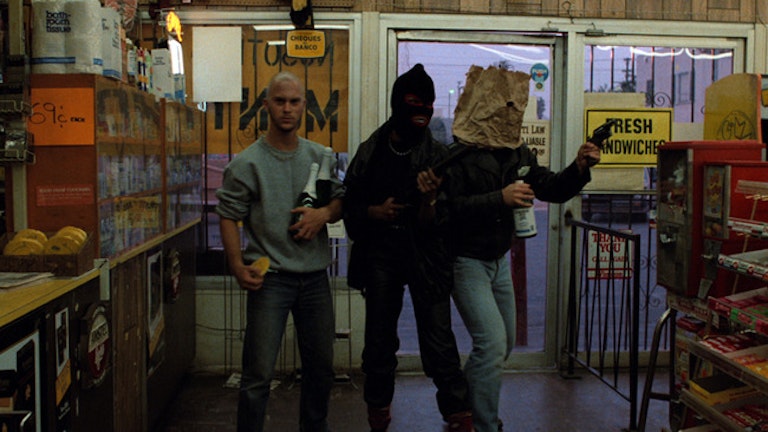 If you have even a passing interest in “alternative” culture, cult film, ’80s hardcore, American cult cinema, there’s a very good chance you’ve seen, if not internalized, Alex Cox’s Repo Man (1984). Endlessly quotable, and boasting Roger Corman-esque side characters, an appropriately apocalyptic Atomic Age ambiance, and charmingly sordid production design, the rapid-fire Reagan-era punk comedy about a disaffected Los Angelino teen who gets a job repossessing cars still goes down like a cheap six-pack on a hot day. At this point, much of the film’s release history has become lore writ large: it was pulled from theaters after a week-long Chicago run and unceremoniously dumped on home video only for it to be re-released after the soundtrack became a minor hit, backed by an underground following that grew thanks to the film’s made-for-TV edit, complete with surreal, campy insults (“melon farmers” is a particular crowd favorite) as profanity overdubs.

Like all great films of a certain disjointed bent, Repo Man came about through a series of coincidences and fuck-ups. In his autobiography X Films: True Confessions of a Radical Filmmaker, Cox attributes inspiration to his encounters with a real-life repossession agent, with whom he would “cruise downtown in the Watts and Vernon areas, where Repo Man was ultimately made.” The film actually getting studio backing he chalks up to a chance meeting and a throwaway comment from the manager of country-western star Kenny Rogers, Ken Kragen, and Universal Pictures’ desire to impress a potential new business partner. The first time round, Cox reports, Universal Pictures' Robert Rehme initially rejected the script because he “didn’t know what it was about.”

Moving between the Los Angeles basin and outer space in a narrative that doesn’t always cohere, Cox’s debut feature turned its nose up at every rule in the book. It is a punk film in spirit and practice (even correcting for the film’s negative pickup contract with Universal Pictures, who ballooned the production budget from $120K to around $1.5 million)—and yet Repo Man features only one scene set in the pit. Early in the film, we find Otto (Emilio Estevez), freshly fired from his shitty grocery store job, slam-dancing and H.B. strutting to the Circle Jerks in an abandoned lot against a brick wall adorned with scene graffiti: the circle-A symbol; “Iggy Lives”; “Punk’s Not Dead”; “Die Bitch.” He sees a friend who has been locked up in juvie, Duke (Dick Rude, a real-life Pynchonian moniker), approach the circle with a mask of restrained hostility. It doesn’t take long for Otto warmly greet him, cradle him by the back of the neck, and throw him to-and-fro.

"Like all great films of a certain disjointed bent, Repo Man came about through a series of coincidences and fuck-ups."

A makeshift dance floor where alienation becomes externalized, the pit sees community arise from a foundation of faux-aggression, abstracted into performances of combativeness set to hyper-fast, distorted power chords and guttural chants; aggressive full-body contact, rather than sensual communion, is the language of intimacy in the hardcore scene. Outside the pit, however, all bets are off. On the same night that the old buddies reunite, Duke cuckolds Otto, running off his now-ex-girlfriend Debbi (Jennifer Balgobin). Pissed off and brooding, Otto takes the punkest straight job there is—a carjacker with a license—and subsequently trades in one pit for another.

With its posturing masculine energy and emphasis on codes that are casually broken depending on the person and time of day, the Helping Hand Acceptance Corporation agency (ruled over by But, Lite, Oly and Miller, four repo men Cox named after cheap beer brands) has something of the character of the underground scene. So much so that—even though the four characters were loosely based on the four members of the group Fear (“the city’s most obnoxious, obstreperous, and tongue-in-cheek punk band,” according to Cox)—if Cox had actually cast the band, it might have been a little on the nose.

Being a repo man is a disreputable establishment job—Otto compares it to being a landlord in an early draft of the script—and yet he takes to the insular subculture like a duck to water. He roams the wasteland-like streets and cons debtors out of their transportation, which in car-reliant LA means effectively robbing them of their independence. He never discriminates between the impoverished and the affluent, which negates any kind of governing ethical behavior that someone like Bud (Harry Dean Stanton, in one of his no-shit finest roles) professes to hold. “I take back cars from dildos who don’t pay their bills. Cool, huh?” Otto brags to Leila (Olivia Barash), alien enthusiast and casual object of affection. “No,” she flatly replies.

The Repo Man section in X Films features a litany of similar anecdotes, strengthened by Cox’s scornful commentary on industry titans and really anyone with money. Most of these stories are typical of a young director working with grizzled professionals, including a veteran music editor who initially synched up every cue wrong, and most notably the combative relationship Cox had with Stanton, who didn’t want to learn his line à la Warren Oates in Two-Lane Blacktop (1971), wanted to use a real baseball bat during the fight scene with the Rodriguez brothers, and only followed direction out of respect to DP Robby Müller, with whom he’d work next on Paris, Texas (1984).

Cox made it clear that Repo Man was a crash-course learning experience on how to direct in the major leagues, which is as much about artistic vision as it is about managing egos and organizing the set. Like other independent films of its era, the production had its fair share of on-the-fly fixes, many of which now appear to viewers as though they were predetermined artistic choices, and multiple scenes, including the luminous ending and the death of mohawk-sporting punk Archie (Miguel Sandoval), were haphazardly re-shot or rewritten due to various production snafus. Fox Harris, who plays the radiation-poisoned driver of a 1964 Chevrolet Malibu, Repo Man’s iconic MacGuffin, could not “negotiate the pedals [on the car] or really understand the purpose of the steering wheel.” All of his close-ups were shot while the Malibu was being towed or with a stunt double for the wide shots, which allowed Harris to act like an unhinged maniac behind the heel without actually having to drive the car. A 21-year-old Zander Schloss—then of Juicy Bananas fame, later a bassist for the Circle Jerks and The Weirdos—only played his memorable screen debut as Otto’s supermarket shelf-stacking pal “Kevin the Nerd” because originally cast actor Chris Penn had performed the character like he was in an SNL sketch, necessitating the scenes be re-done. And, much to the chagrin of Cox and editor Dennis Dolan, the on-location sound was for a mono-mixed studio substitute, which ultimately lends a B-movie sheen to the film’s guerilla-style mise-en-scène. 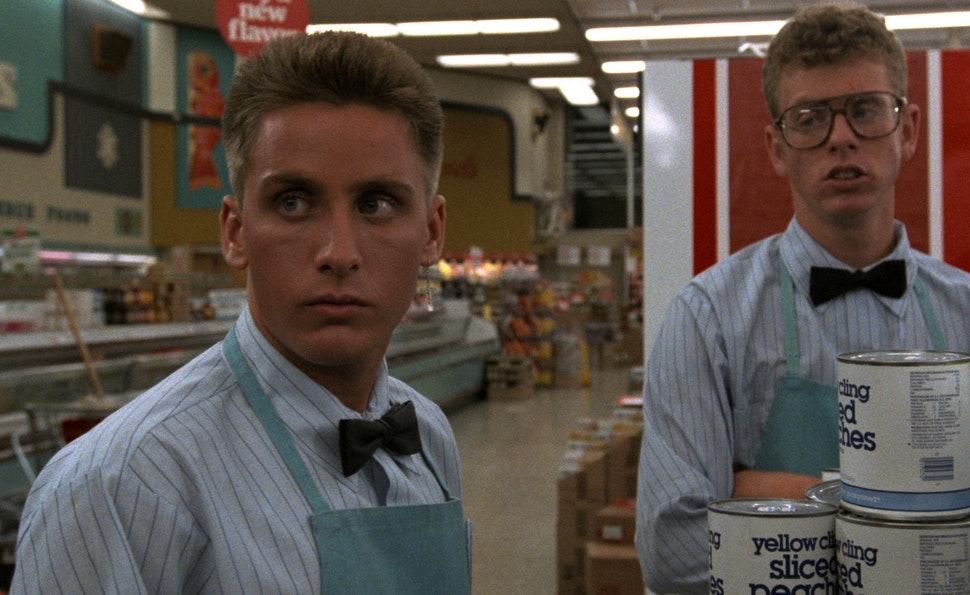 Despite being a relative neophyte, Cox was frustrated by the endless bureaucracy that came with feature filmmaking: the “expert wisdom” of Hollywood old hands, the sluggish pace of the special effects crew that he eventually jettisoned, and the sheer number of cars and police escorts required to shoot anything in LA. But his anti-establishment suspicions well predate the production. Even when the first Repo Man scripts were being sent out to studios and production companies, it was accompanied by a prospectus filled with exaggerations and outright lies—for example, Otto was described as a “karate expert”—smart aleck bullshit in service of appeasing wealthy potential investors, who’d think they were getting something pitched to the action movie crowd. In X Films, Cox dismisses John Waters’ sensible advice for young filmmakers to “get along with rich people”: “I wish it was as easy as he suggests. But rich people care only for money and status, things the artistic soul eschews.” He might be reductive in his judgment here, but his casual contempt imbues Repo Man with an indelible, evergreen sense of anarchic fervor, and it has also kept him from remotely selling out through his tumultuous career. (As he proudly told one interviewer, “I turned down the opportunity to direct The Three Amigos [1986] and made Straight to Hell [1987] instead.”) Like Bud says, via Mexican revolutionary Emiliano Zapata, he’d rather die on his feet than live on his knees.

Similarly, Otto identifies the necessity of having a job while loathing the prospect of upward mobility—though he retains enough skepticism that he’s not too broken up when, like all scenes, the repo man gig finally peters out. Helping Hand might act like a foster home, taking in misfits and working-class strays, but the agents would sell each other out in a heartbeat for a hefty commission. In Repo Man’s Los Angeles, all loyalties are suspect and all ties conditional—even the buddy cop relationship between Otto and Bud, the sweetest in the film. At one point, Otto drinks in a nightclub and watches a terrible lounge act perform an easy-listening cover of “When the Shit Hits the Fan,” with the winking irony that the band is played by the actual Circle Jerks. “I can’t believe I used to like these guys,” he sneers.

Near the end of the Repo Man chapter, Cox submits that the writing in Repo Man is better than the direction because it was only his second film after his 40-minute short Edge City/Sleep is for Sissies (1980) and he “hadn’t evolved much.” An uncharitable viewer could attribute the charms of Repo Man solely to the performances, and to Müller’s shooting strategy, which emphasizes two-shots, tracking shots, and limited coverage. But Cox brings more to the table than a clever line and a gung-ho spirit. He erects an outsider’s punk vision of LA, filled with religious grifters and government spooks and errant youths who give something back when a deceitful world kicks them down. Only a worldview hostile to convention and mainstream approval can bring about this type of inhabited urban hallucination. It’s purely atmospheric, long-lasting because it invisibly shapes the frame.

The fluctuating, unfixed meaning of “punk” inevitably lends itself to a lot of individual projection, but Repo Man’s final sequence has always felt like the embodiment of a transcendent, stubbornly youthful punk cinema. Miller (Tracey Walter), a childlike space-case who believe in the “lattice of coincidence” that connects seemingly disconnected people and events, beckons Otto to come hop a ride in the glowing vehicle that no one else can penetrate. Instead of feeling apprehensive by the idea, Otto take to it like just another adventure, eagerly leaving behind his soon-to-be-dead buddy and his fucked-up community and his meager existence. Walter’s come-hither gesture, Estevez’s shit-eating grin, and the chintzy flight effects all create a sense of handmade wonder that still feels beyond this world. It’s the Star Gate sequence from 2001: A Space Odyssey (1968) redesigned for people who found solace in the Stooges.

No matter how many times I watch it, I get embarrassingly choked up by that scene. It’s a reshaping of old ideas in the vision of a new world, until any trace of its influences flattens into the present. It’s the belief that one’s choices, while reflected by and in conjunction with the sociopolitical mechanisms of the era, dictate one’s future. It’s about pissing in the face of people who say, “Don’t do it that way.”

Vikram Murthi is a Chicago-born, Brooklyn-based freelance film critic and writer. He has written for such publications like The A.V. Club, The Nation, Reverse Shot, and Filmmaker Magazine. He's very much for hire. 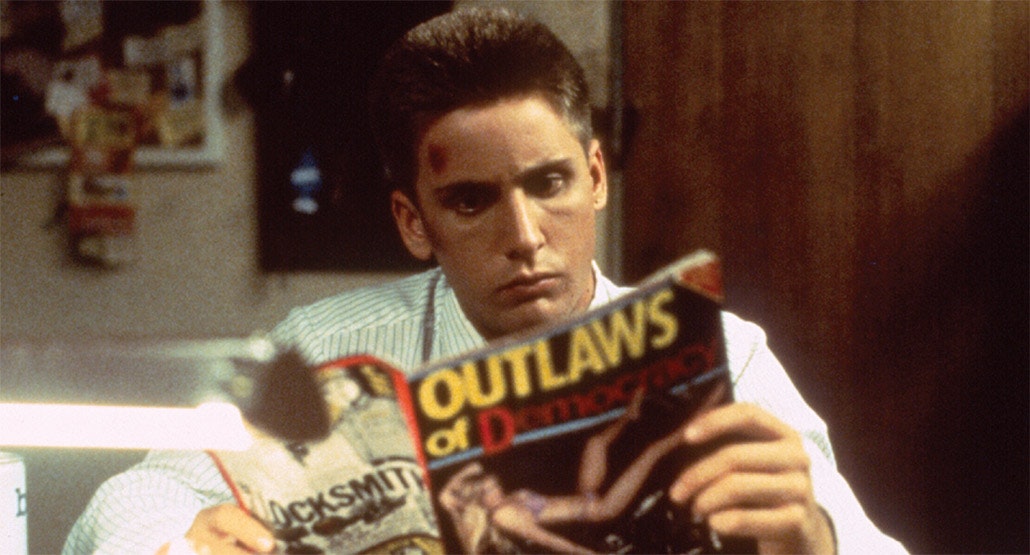 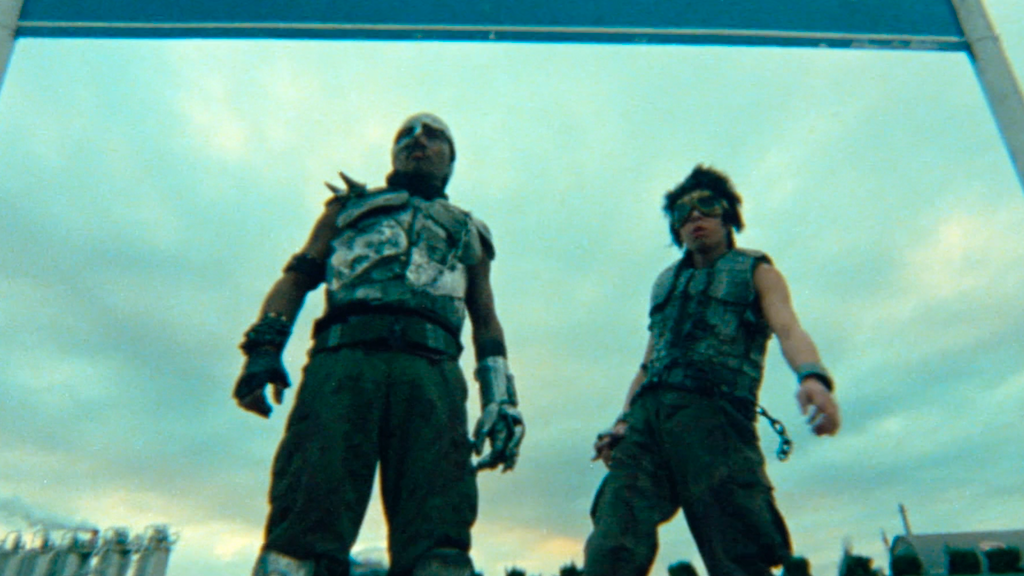 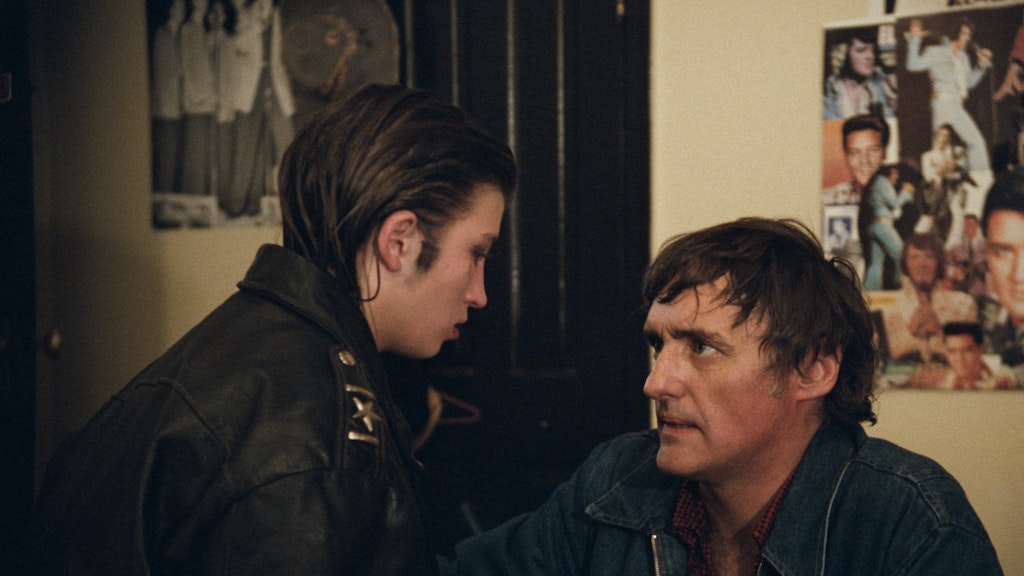