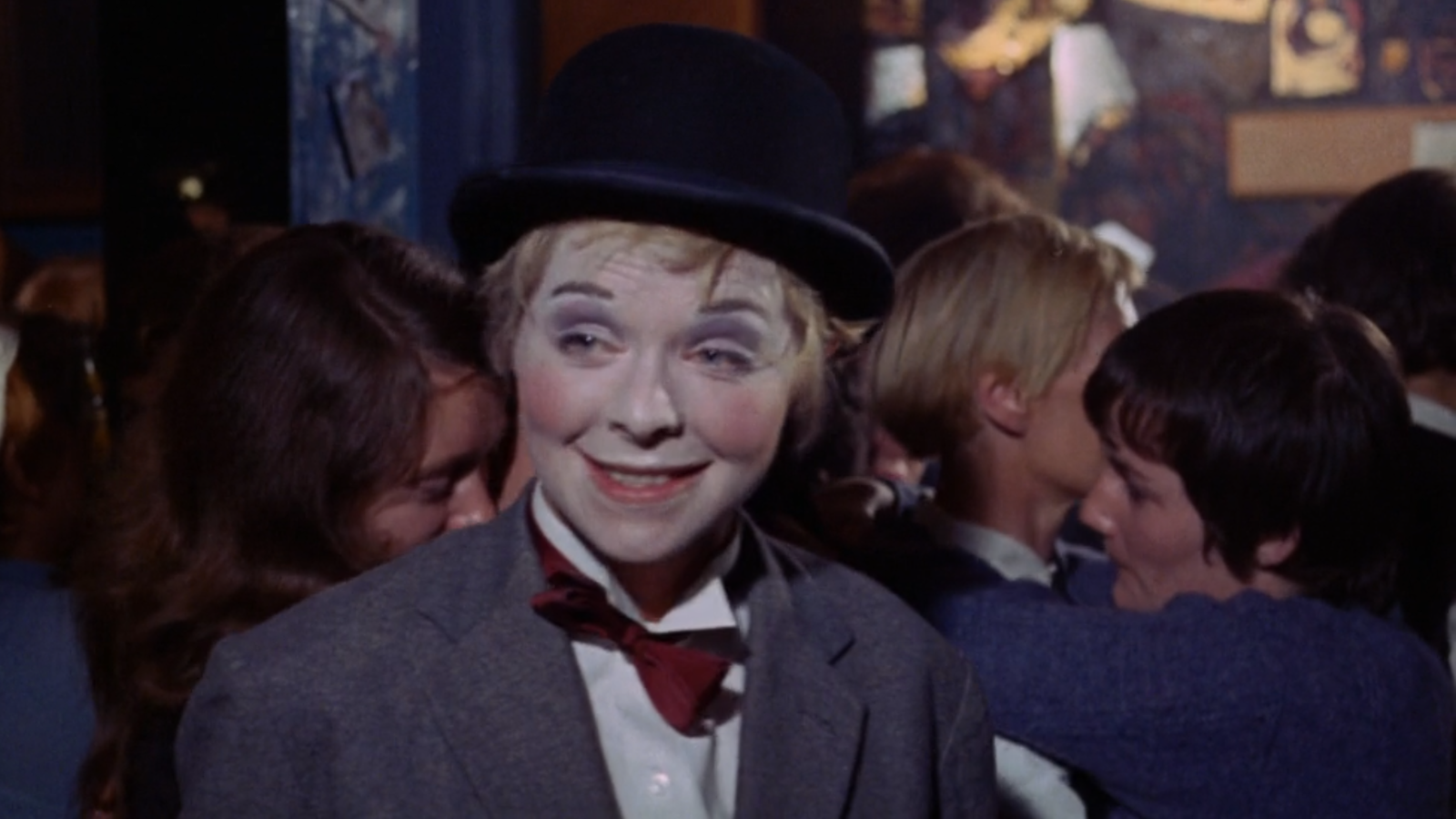 The Killing of Sister George and Lezzie London Clubbing.

The Killing of Sister George screens at Metrograph on Saturday, 18 June and Sunday, 19 June as part of Muff Dives: The Dyke Bar in Cinema, introduced by series curator Melissa Anderson. 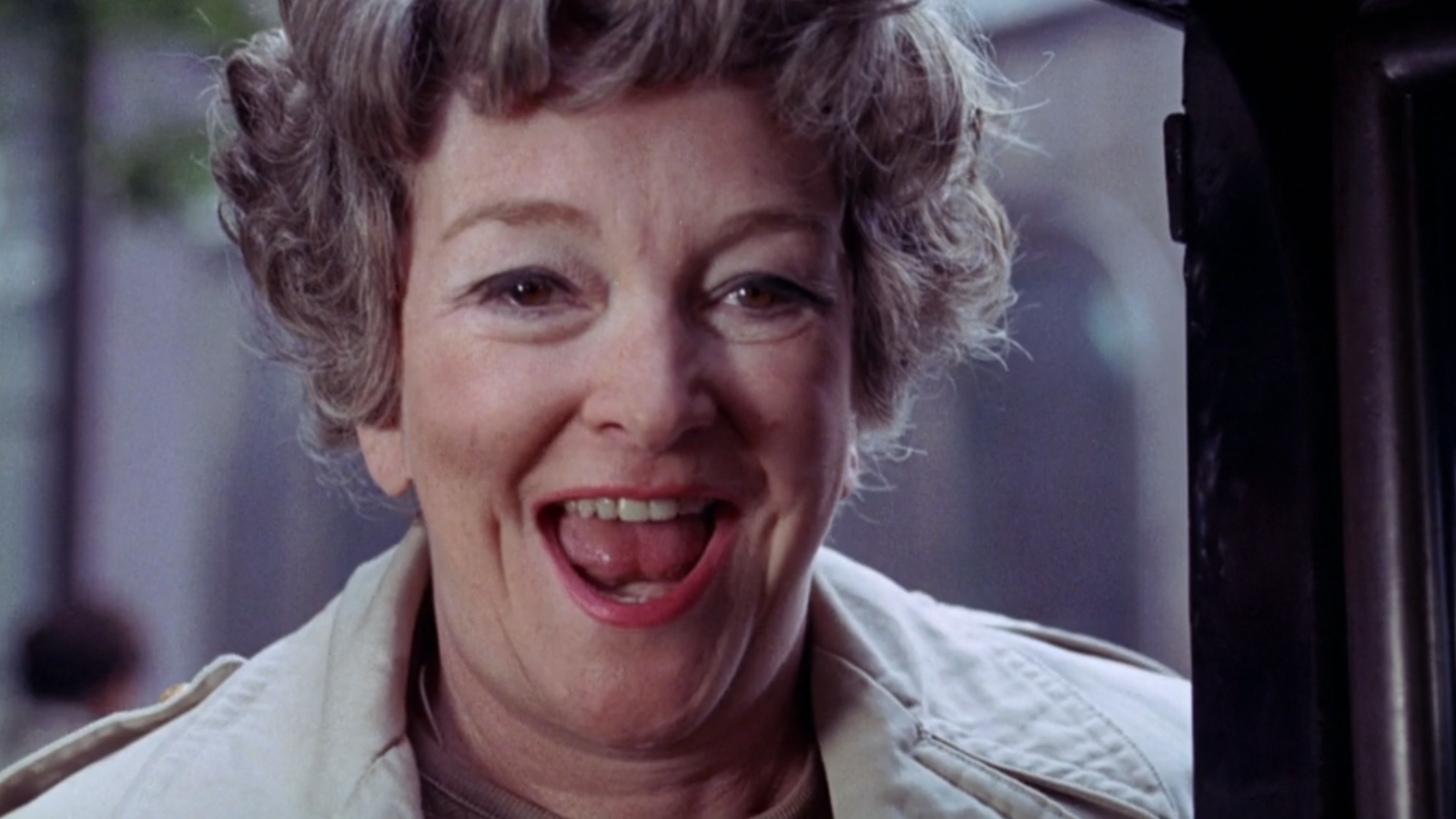 Robert Aldrich’s sapphic classic The Killing of Sister George is the last of several films the director made about the indignities and hazards of stardom, a mini-oeuvre that also includes The Big Knife, What Ever Happened to Baby Jane?, and The Legend of Lylah Clare. This dyke drama was released in 1968—the same year that marked the introduction of the ludicrous rating system of the Motion Picture Association of America, which branded Aldrich’s lavender opus with an X, the first “serious” production to receive the stigma.

Based on Frank Marcus’s 1965 London-set play of the same name, which was a success in the West End and opened in New York’s Belasco Theater in 1966, Aldrich’s movie centers on a fractious, Knightsbridge-dwelling lesbian couple. George (Beryl Reid, who originated the role onstage), née June Buckridge, is a middle-aged, gin-soaked actress on the popular soap opera Applehurst; although she’s nothing like Sister George, the sexless, altruistic, kindhearted country nurse she plays, her character’s name essentially becomes her own. George lives with her much younger, high-femme girlfriend, Childie (Susannah York), born Alice McNaught and so nicknamed because of her obsessive attachment to her doll collection. Rupturing the relationship is ophidian BBC executive Mrs. Mercy Croft (Coral Browne), who, after informing George that her character is going to die (the “killing” of the title), proceeds to diddle Childie—an excruciatingly unerotic two-minute scene that wasn’t in the play—and spirits the twentysomething away to her pied-à-terre.

'Sister George' may be the first, if not the only, movie in which an alcoholic, tyrannical lez is redeemed for her unwavering commitment to her sexuality.

The movie fared poorly at the box office, owing in no small part to reviews such as that by the New York Times’ Renata Adler, who wrote of Mrs. Croft’s seduction of Childie: “Miss Browne approaches the breast with a kind of scholarly interest, like an ichthyologist finding something ambivalent that has drifted up on the beach.” Adler’s description isn’t too far off, and Sister George certainly wouldn’t win any retroactive GLAAD media awards for its caustic portrayal of an intergenerational butch-femme dyad. George and Childie’s relationship is defined by bizarre sadomasochistic ritual (after squabbling, Childie must kneel before George and eat the butt of her lover’s cigar to show her remorse) and at times outright cruelty (Childie is assaulted by a projectile scone hurled by George during Mrs. Croft’s first visit to their flat).

Aldrich’s film endures, however, for its sly way of celebrating unabashedly out dykes. Though she has lost both her significant other and her job—with Mrs. Croft’s humiliating offer to star in the children’s show The World of Clarabelle Cow her sole hope of employment—George is the only character who has not compromised herself or preyed on others; Sister George may be the first, if not the only, movie in which an alcoholic, tyrannical lez is redeemed for her unwavering commitment to her sexuality. “Not all girls are raving bloody lesbians, you know,” Childie says to George during one of her jealous rages. “That is a misfortune of which I’m perfectly well aware,” the older woman retorts. 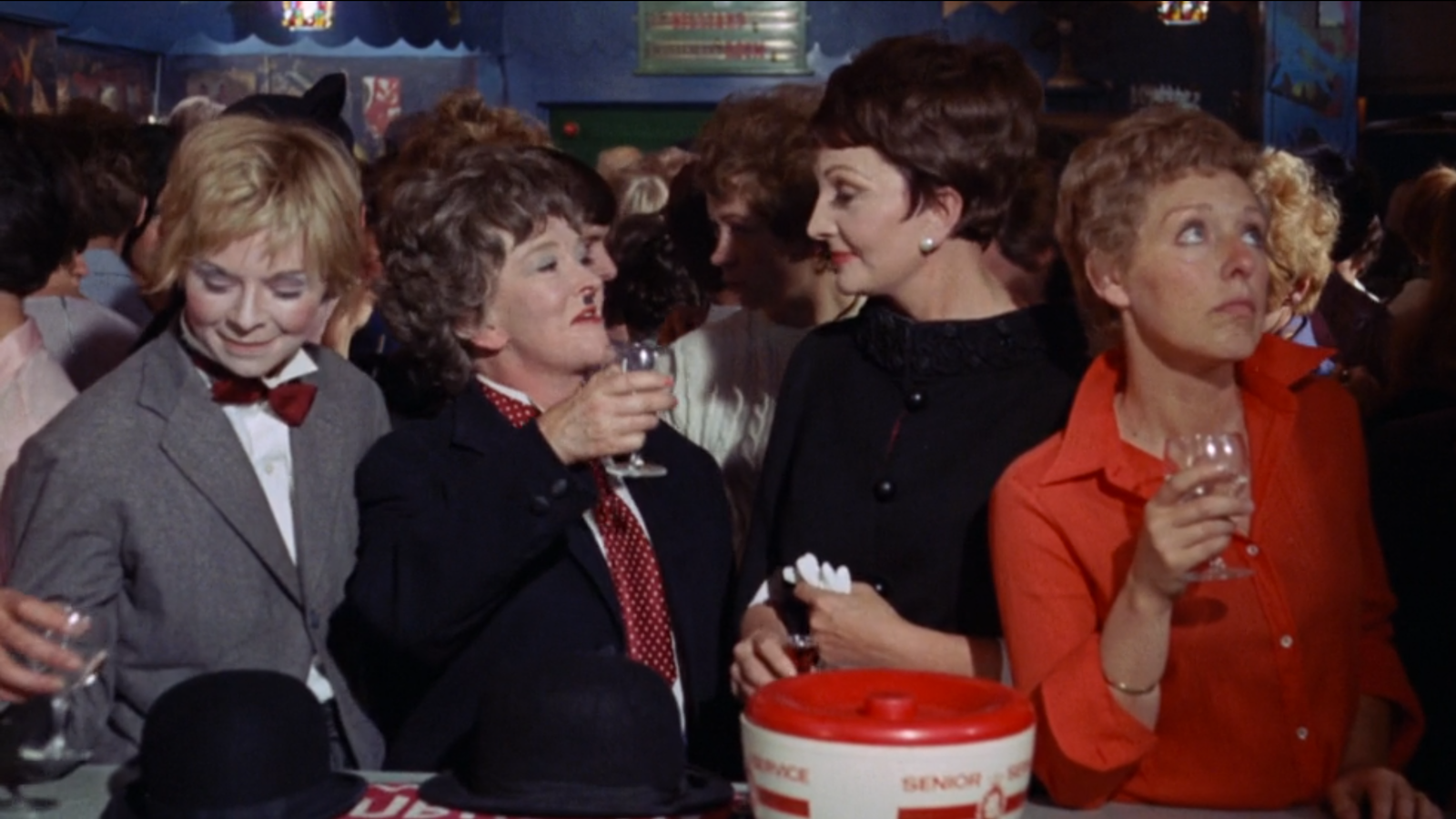 And where were those raving bloody lesbians to be found? At the Gateways Club, a real sapphic nightspot on Chelsea’s Kings Road where Aldrich filmed the pivotal scene in which Mrs. Croft tells George and Childie about the dismal fate of the former’s soap character. Actual club patrons were used as extras, as were Gateways staffers, including co-owners Gina Cerrato, an elegant woman of a certain age with a cigarette holder stationed near the door, and the mononymed Smithy, seen working behind the bar. To this viewer, the Gateways, which closed in 1985, looks like lesbo paradise. Guests are greeted by two dapper, ducktailed women; an all-distaff quartet, in matching powder-blue sleeveless outfits and fetching short shags, plays both fast and slow; the club is packed with eager gyrators; lust abounds; no one has to wait long for a drink; the pool room is empty.

At one point we see the Gateways through first-timer Mrs. Croft’s eyes, or rather, through the rise and fall of her eyebrow. (Browne fabulously displayed what Vito Russo in The Celluloid Closet called “the newest thing in the hooded cobra look for lesbians onscreen that season.”) After descending the staircase that leads to the club’s main entrance, the BBC bureaucrat slowly scans all the writhing sapphistry on display. As she joins George and Childie at the bar, she takes another lascivious, fascinated look around: “Yes, it’s most, um, entertaining,” she nervously chuckles. The prim TV administrator orders a sherry; it’s difficult to imagine that someone so uptight would ever return to the Gateways. By film’s end, we may grieve for the sacked, newly single, inconsolable George. But we have no doubt that she’ll know exactly where to go to find another girlfriend—or at least a few hours of fun.

Melissa Anderson is the film editor of 4Columns. Her book on David Lynch’s Inland Empire is available from Fireflies Press as part of its Decadent Editions series. 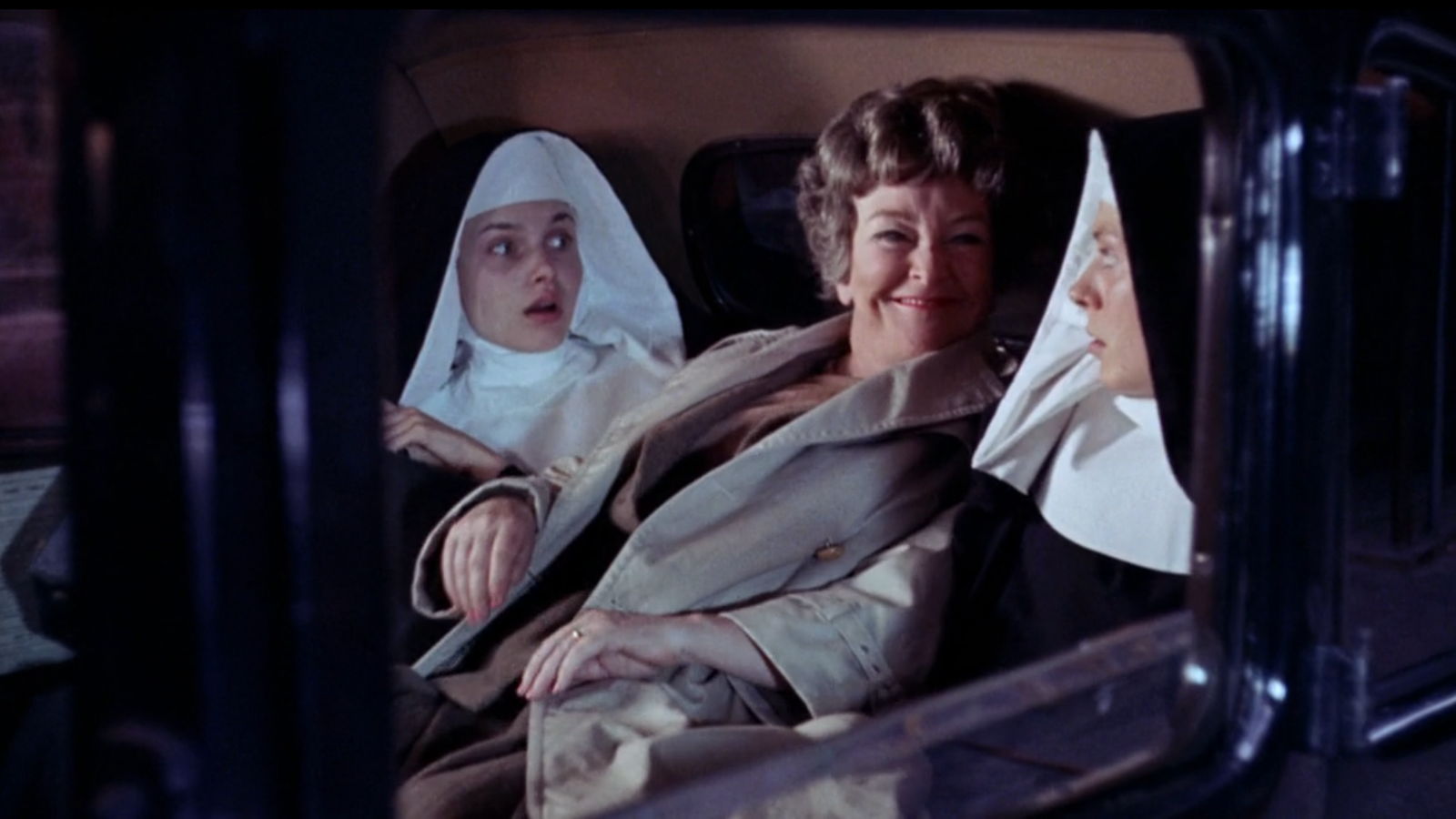