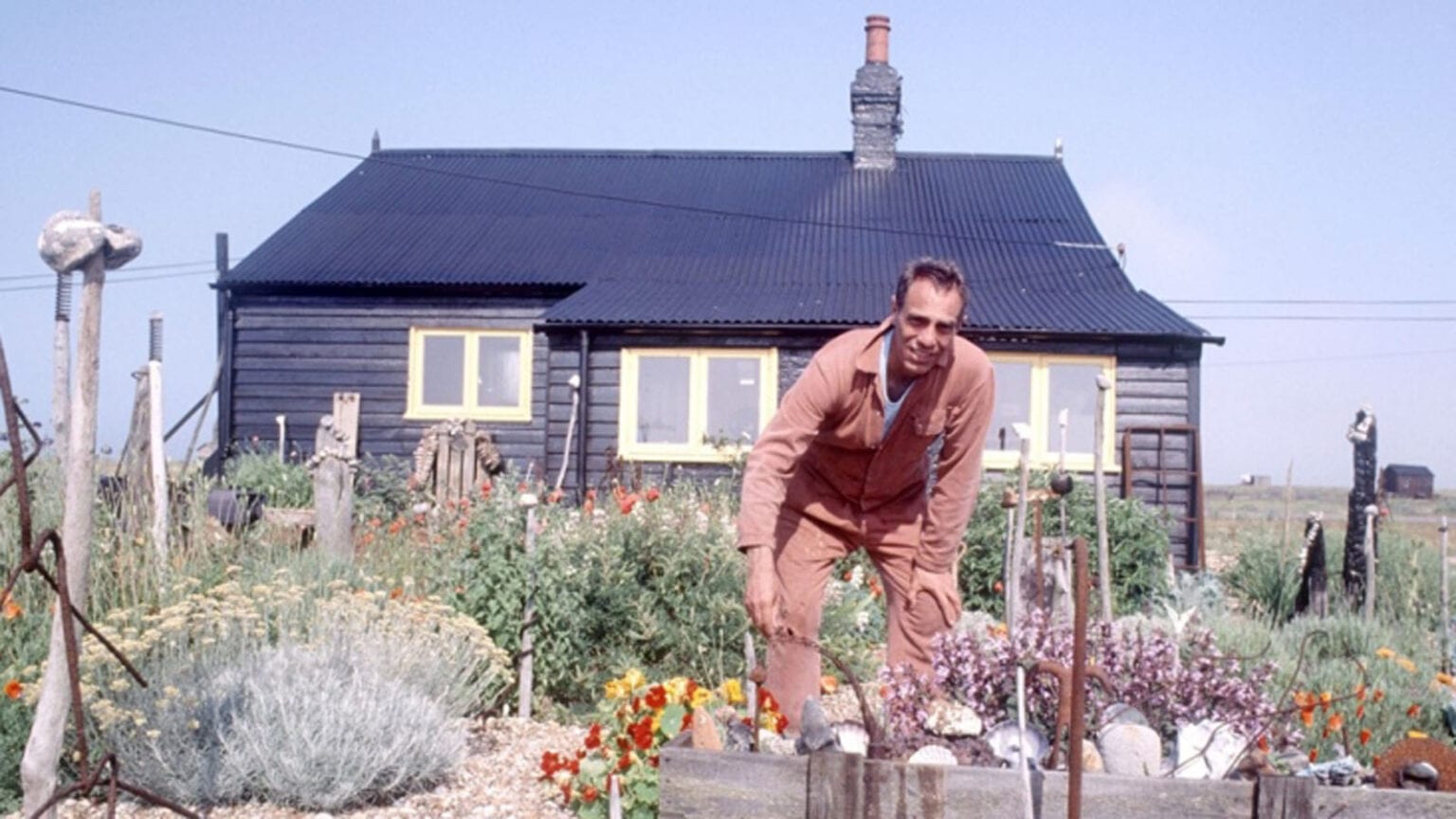 Prior to a run of Jarman’s little-seen masterpiece The Garden at Metrograph theater last year, we uncovered this rare interview with the director from 1990 in the movie’s original press materials. 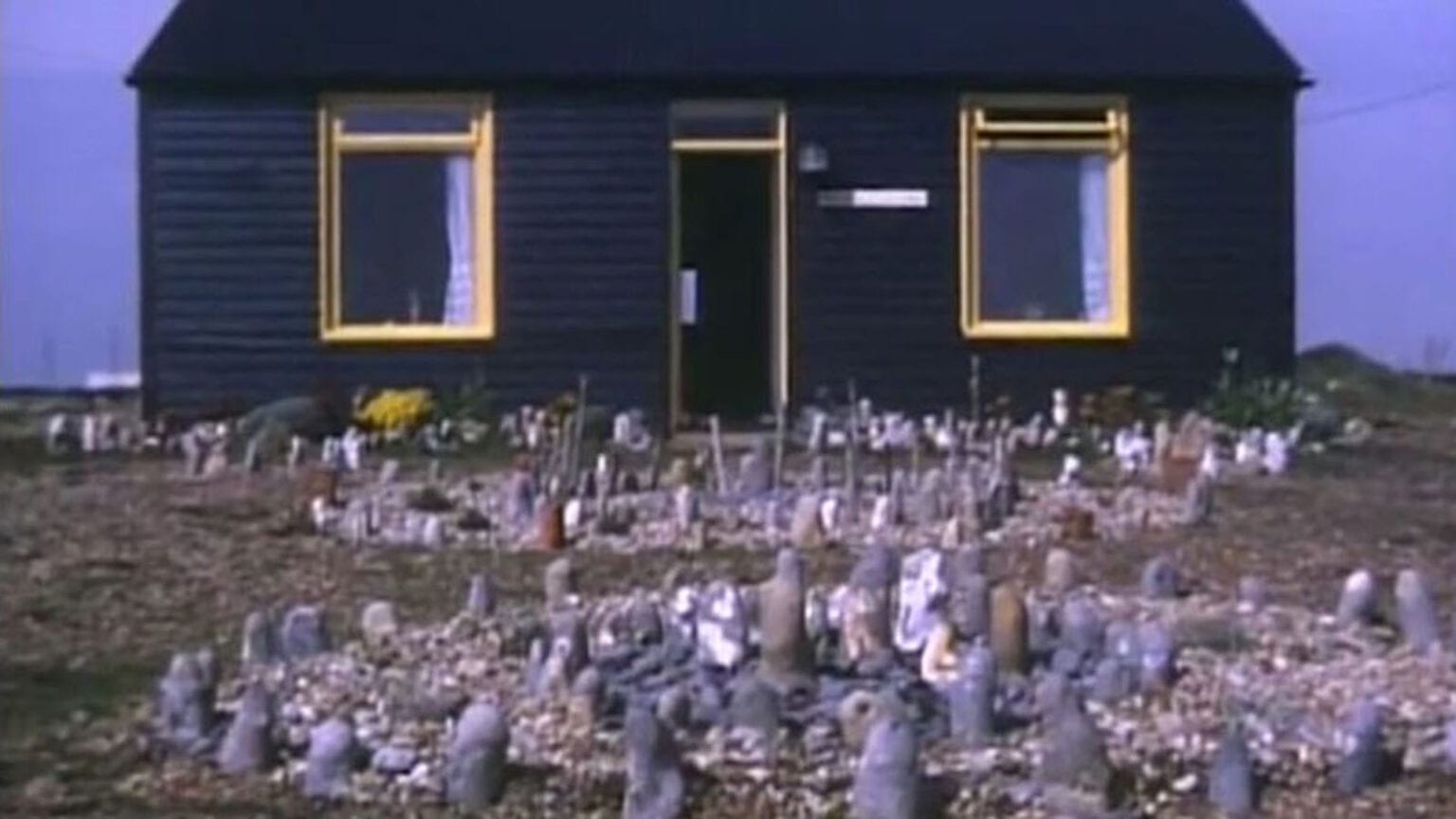 Derek Jarman made The Garden on the grounds of his seaside cottage in Dungeness, Kent, where he moved shortly after his diagnosis with HIV, which took his life in 1994. The interview took place in Jarman’s garden in 1990.

Jarman bought a house in Dungeness three years ago. It sparked an idea. He began filming straight away. “As soon as I looked at this fishing community desert, I thought it was a great place to make the life of Christ. I was thinking with the fishermen and the boats you can make it like the Sea of Galilee and that’s how it started. The garden was both the Garden of Eden and Gethsemane.”

The location has been used for previous Jarman projects. “We had made part of The Last of England down here, in fact, and various pop promos, and got to know this place. It’s very unusual and quite unlike anything I have seen in England. There is only a mile or two like this. Once one turns the comer onto the Dungeness road, one is in another world. In some way it reminded me of North America, with its telegraph poles and crazy angles. It is also a working area, so it is not pretty, but it has the best skies you can imagine. Because it is so flat and there are no trees, it’s like a desert. You watch the sun come out of the sea in front of the house and the sun set behind the house in the evening. It has wonderful light. Then there is the nuclear power station which in some ways has stopped this being turned into an area where lots of people come and have holiday chalets.”

Loosely depicting episodes in the life of Christ, The Garden is set against the backdrop of the windswept Dungeness headland pointing out the central theme of the Church’s attitude to homosexuality and its response to the scourge of AIDS. “The film is structured like a dream allegory, in a poetic tradition, rather like Chaucer’s Canterbury Tales. The film is a dream allegory of the author, in this case, myself. I could have put somebody else into it, but really dreams are always in the first person, though people often invent proxies. I go to sleep and go on a mental journey. Sleep can take lots of side turnings and in turnings a lot of things can happen.” Again, as with The Last of England, Jarman explores the little-used cinematic genre: the auto-bio pic. “I am in it, so there is that element of it being almost a biographical documentary of which there are very few. There is Testament of Orpheus, which is not a very good film in some ways, though I love it. Few people have tried this genre and it’s a dangerous area to get into.”

“THE GREAT THING ABOUT THIS FILM IS ANYONE WHO ENJOYS IT WITH AN OPEN MIND CAN GIVE THEIR OWN INTERPRETATION. PEOPLE ARE ALWAYS ASKING ME WHAT I THINK. I SAY WHAT I THINK IS IRRELEVANT, IT’S WHAT YOU THINK.”

Though most filmmakers avoid overt self-portrayal, Jarman bravely explores the viewpoint. How does he find others’ self-perceptions? “I suppose ostrich-like filmmakers often ignore their own lives, but I was brought up with a different set of aesthetics to filmmaking, those of the painter. Presumably, the painter would paint his immediate surroundings and if he was going to paint a vase of flowers, it would be one at home. For a painter to concentrate on his own life or any other form of art is actually considered to be a raison d’être. If a painter started to operate in the way a film director did, everyone would say the paintings were valueless. Witness the astronomical sums of money that are paid for van Gogh at the moment where someone is painting their own life. It seems very strange that in cinema this doesn’t really happen.”

Starring in The Garden are Tilda Swinton, who appears as the Madonna, as well as other characters; Roger Cook as Christ; Spencer Leigh as Mary Magdalene; and Pete Lee-Wilson as the Devil. Two lovers, played by Kevin Collins and Johnny Mills, appear in imagined scenes: flagellated by Santas, treacled and feathered by policemen led by evil incarnate Pete Lee- Wilson, and dragging a giant cross. Their trials mirror the hardships of Christ. Symbolically these modern-day characters experience biblical tribulations. “The great thing about this film is anyone who enjoys it with an open mind can give their own interpretation. People are always asking me what I think. I say what I think is irrelevant, it’s what you think. That is the whole point of having an open film like this.”

Centered around the Dungeness garden, this is where a journey in many directions begins. “It starts off with the Garden of Eden, then it progresses through various moments in Christ’s life, again not in a particular way.”

Taking one of the Bible’s most famous stories, Jarman adds contemporary counterparts that illustrate Christian attitudes today and how they have been passed down through generations. “You have recognizable scenes like the Judas kiss or Pontius Pilate and the arrest. There is no problem identifying and knowing where you are. Then there is another whole level of my childhood memories. This kid—Jody Gruber—is in a way my childhood self. A strict schooling and everything else. The schoolmasters’ canes become the canes of the flagellation.”

Society’s attitude toward him as a homosexual has resulted in this strong film statement. “If you are on the accepted side of the sexual fence, it's largely straightforward, there are no problems. You have to be on the other side to find you’re hedged around and it is a problem. It's something that has irked me all my film life, because I know that if I had been heterosexual, money would have been flung at me. To make a film like this, I have to drive myself into a certain type of film making because no one would have ever funded it. They would have been too frightened to.” 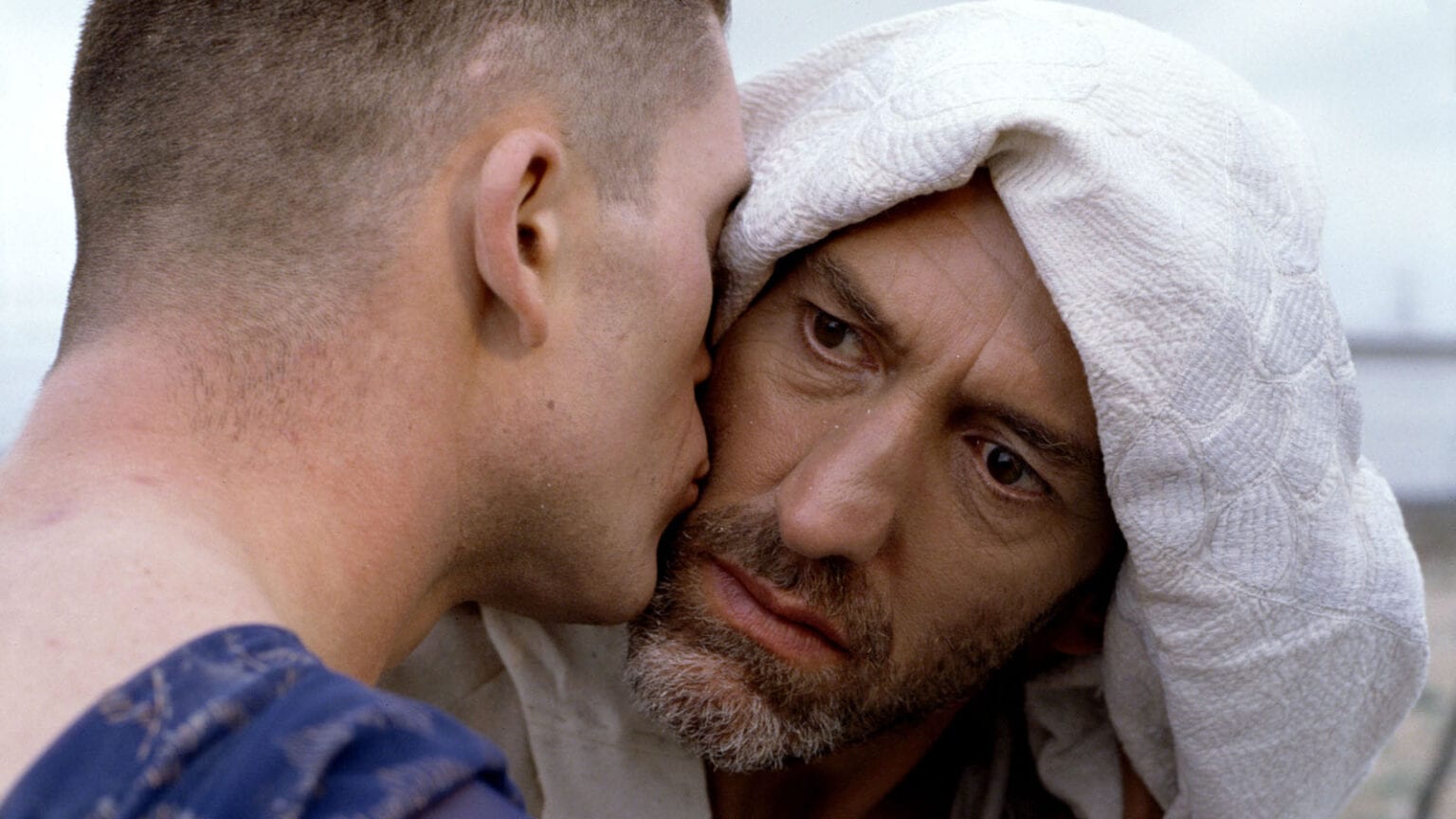 Style is determined as much as by the politics of filmmaking. “I realized in the middle of the ’80s, it was going to be hard to make the film I wanted to so I had to find ways round. The only way I could see was not to have a script any longer.”

Through using an improvised technique, Jarman knows the images to be incorporated at the outset. Images of religious martyrdom feature heavily and have been central to his work as far back as his first feature, Sebastiane.

“Putting the two young men in certain elements of the passion draws immediate attention and shows that this whole morality thing is topsy turvy. These people are the ones one should be admiring and actually listening to. I feel the moral high ground—particularly in the ’80s with the AIDS crisis—was held by gay men and women. I feel that strongly. Though the most appalling things happen to them, the myth remains intact and they are resurrected in the end. Lam carrying the whole thing through by putting them in the position of being the Christ figure, you can say it’s a great muddle, but I can’t see how else one can deal with it. It is all too enormous.”

His observations are based on personal experience. He sees the advances in personal freedom turning back and the climate changing for the worse, “Each generation experiences these things differently. I’m nearly 50 and what I have experienced obviously indelibly marks me. It was extremely difficult to grow up as a gay man when there was no identification or publication in the late ’50s early ’60s.”

“We altered that and got rid of that and hoped that the world would become more sensible, but in fact we saw in the ’80s it wasn’t at all. All sorts of levels politically: things like Section 28, which puts this country in a world of its own. Ridiculous laws to do with age of consent—21 for men and 16 if you’re straight. All of these things are crazy.”

“This worry is much more widespread than people thought. It was obvious from the word go that it has to be the responsibility of the Church. One has to see the culprits—I mean they have actually murdered people. It is unacceptable when you have the Pope proclaiming on condoms. That sort of attitude will lead to people’s deaths. We know that, everyone knows that. You think they should say, ‘You shouldn’t use condoms, but in the present circumstances it's rather a good idea.’ If you have, like I have this year, been stuck in an AIDS ward for six weeks, it makes you even more cross.”

But Jarman is keen to stress that The Garden has its lighter moments. “I think there is a lot of humor in this film underneath it all, even though the situation isn’t humorous. There are quite a few humorous sequences, like Judas selling the world on credit cards and the rendition of ‘Think Pink’ from Funny Face—the best song in it—sung by West End star Jessica Martin. I think it’s rather good that the whole thing isn’t so po-faced. People might think it’s a desperately serious film with gardens and religion, but it isn’t. Tilda said this film had more moods in it than she can remember a film having. It takes off in so many different directions. One bit is sad, one bit is frightening, bits are funny. It doesn’t have a consistency you normally have in a feature film. Not at all,” says Jarman. • 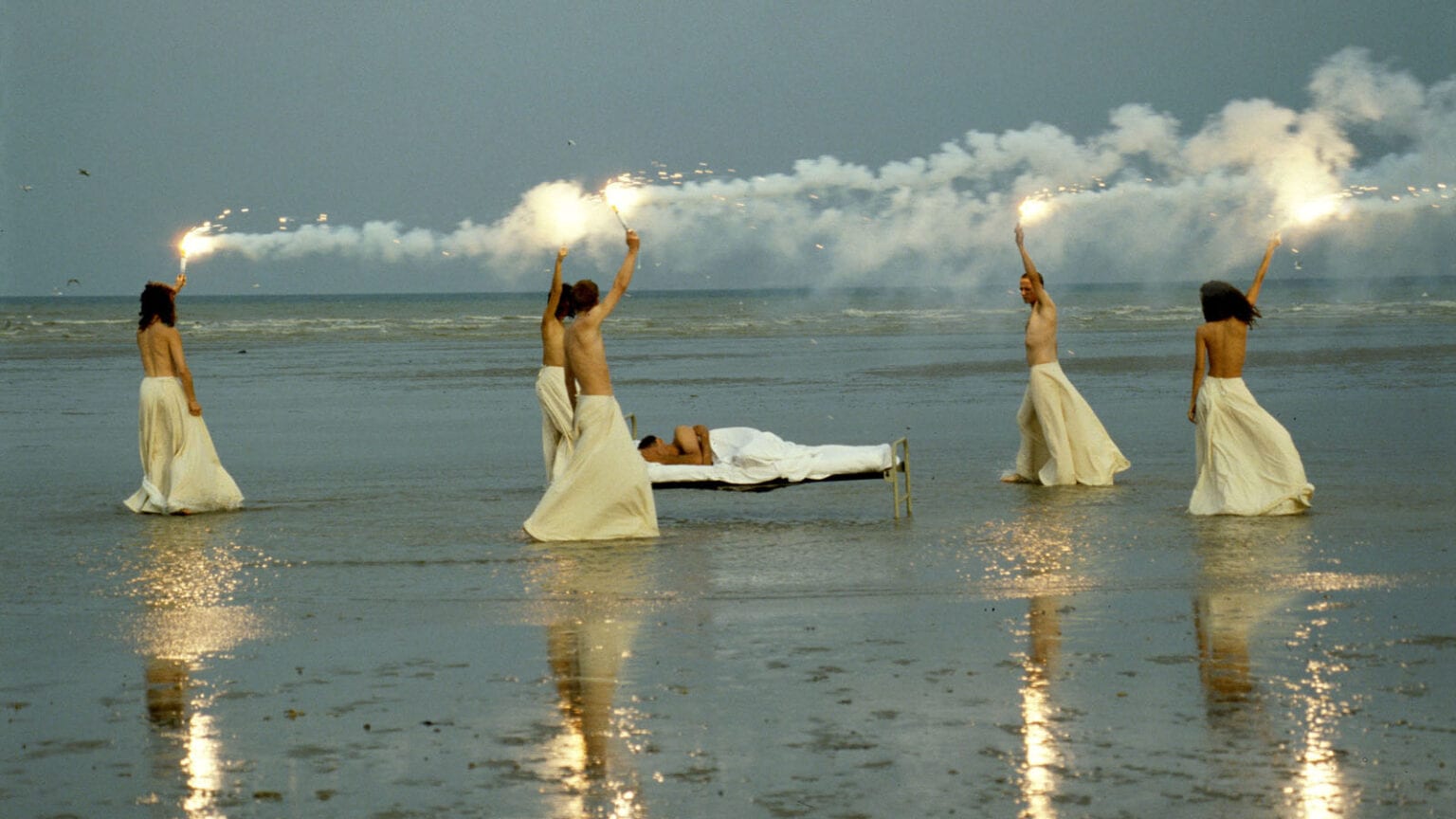