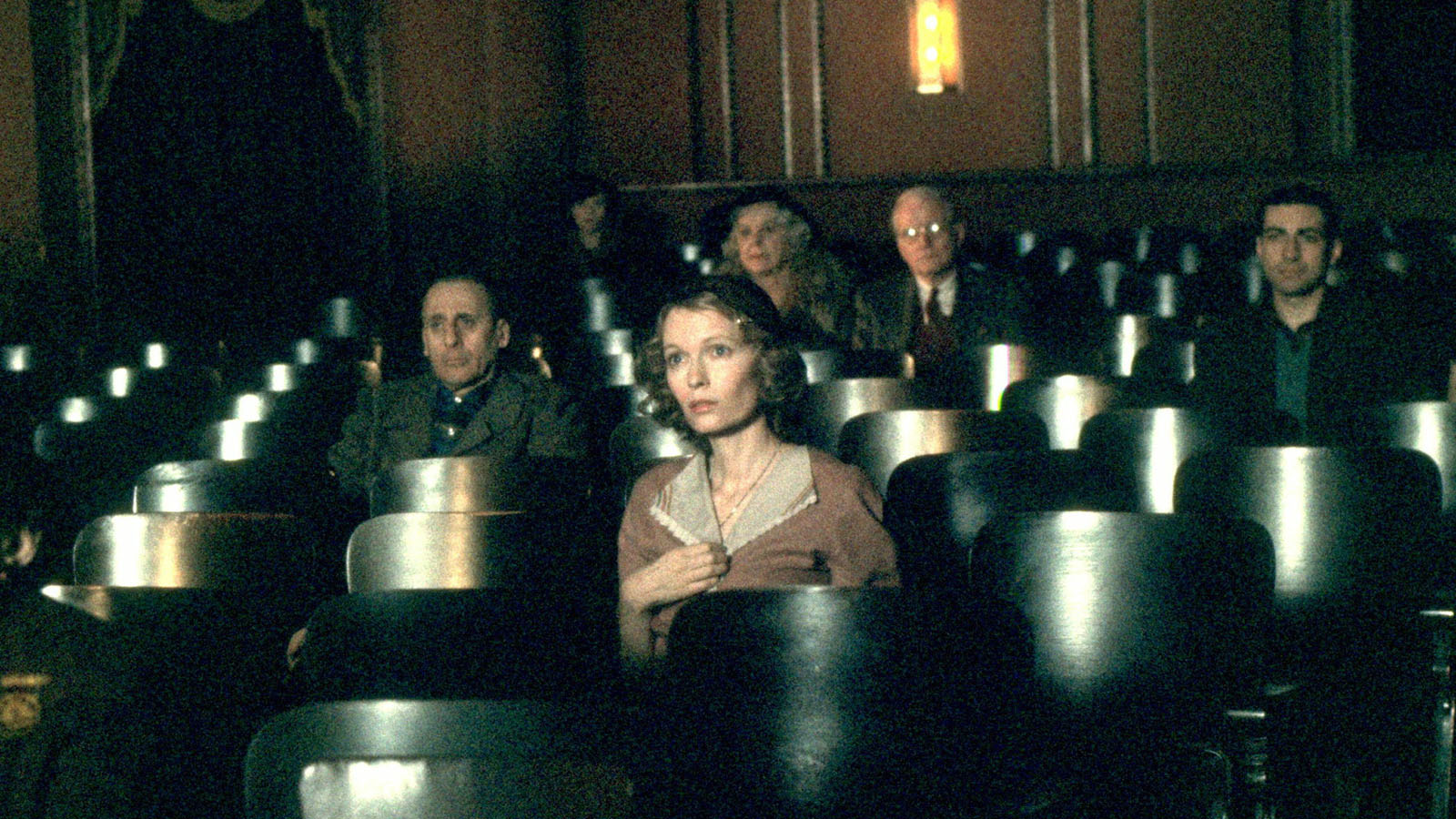 The Purple Rose of Cairo

In The Purple Rose of Cairo, Woody Allen depicts the act of entering a film literally, causing viewers to reflect on their own experiences inhabiting the world of a film.

It is May 2015, Paris, a glorious sunny afternoon. Instead of wandering the streets, flaneur-style, I’m standing on line at a small revival theater in the Fifth Arrondissement, waiting to see Mizoguchi‘s Princess Yang Kwei-fei. Eventually the velvet cord is released, and about 50 of us descend the narrow stairs into the bowels of the tiny screening room. It is dark and quiet, but the screen is large and, despite a full house, there is not a cell phone in sight, not even a murmur of conversation, even though the movie has not yet begun.

Paris is still the temple of cinema, where I worshipped in 1962 and where my husband-to-be, Andrew Sarris, then unknown to me, also worshipped. We spent 10 months in hotels a few blocks from each other, and would compare notes four years later when we met. That time in Paris was a kind of second birth—for both of us, I think—as people are said to have, into knowledge and awareness and even identity. Like many of my generation, I had been a “religious” moviegoer as a child and adolescent; had been shocked and thrilled by my first French movie, Diabolique. Such sophistication, such sexual ambiguity! Not like Doris Day (whom I also loved). Not like Richmond, where I lived.

But it was in Paris that year I was initiated into the church of cinephiles, even if I didn’t know it yet. It was watching Godard and Truffaut; John Ford and Ophuls; Lubitsch and Antonioni; Hitchcock, Howard Hawks and Chabrol; Murnau and Keaton and Sam Fuller; and reading Cahiers du Cinéma, that I entered the screen and the screen entered me. I was lucky to have this compound self compounded still further, and infinitely enriched, when I married the man—the aforementioned Andrew—who loved and understood movies even better than I did. It is as difficult to dissect in these two joined selves where movies left off and we began as to separate the elements of marriage itself. But that both love and movie-love are mysteriously and impenetrably life-altering no one would deny.

movies about movies are almost as old as movies themselves, as if we felt an urgency right from the start to get a handle on how this incredible medium was reshaping our minds and imaginations.

Which is surely why movies about movies are almost as old as movies themselves, as if we felt an urgency right from the start to get a handle on how this incredible medium was reshaping our minds and imaginations. Larger-than-life characters and the stars who play them—alchemized in cinema’s most elusive mystery—colonize our minds to an almost frightening degree. Such is the premise given delirious expression in the reciprocal reel-life real-life shenanigans of Woody Allen’s glorious 1985 comedy The Purple Rose of Cairo. As in its brilliant Pirandellian forerunner, Buster Keaton’s Sherlock, Jr., a smitten moviegoer gets to break the fourth wall, leap into the screen, inject his or her humble self into the action of those tuxedo-wearing nobs.

Allen’s then-muse Mia Farrow plays Cecilia, a sweet, klutzy waitress in Depression-era New Jersey (a redundancy in this film), who drops plates by day and is abused at night by her lout of a husband (Danny Aiello). Cecilia manages to save enough money from her often-docked paychecks to regularly attend the local cinema and buy fan magazines in order to stay abreast of the latest Hollywood gossip. Hers is one of those “humdrum lives” into which Lina Lamont, the silent film diva of Singin’ in the Rain, would promise to “bring a little joy.”

But aren’t all our lives a little humdrum when compared to the toxic glamor of those stars—not excluding the “frumpy” protagonist we’re now watching? Movies are Cecilia’s solace and stimulation, the art nouveau sets and drawing room banter her immersion fantasy, the blandly handsome hero Tom Baxter (Jeff Daniels) her lover ideal. As she sits in the movie theater night after night, both transfixed and transfixing, her face takes on the luminosity of a religious devotee.

Jeff Daniels and Mia Farrow in The Purple Rose of Cairo

One night, her love object returns the favor by descending from the screen and, to the fury and paralysis of the cast (and audience hisses) begins courting her in real life. In the urban squalor of New Jersey, the safari-suited hero becomes a fumbling naïf with limited practical skills, adrift without his scripted dialogue. The predicament ripples with ironies: a lovely insider joke about actual stars who were reported to be similarly bereft in actual conversations; and the perpetually disillusioning awareness that our idols, these charismatic creatures who are our tutors in manners and mores and above all in the language of romance, are empty of soul and intangible as smoke.

Moreover, where there is movie magic, can money be far behind? The conceit takes on another head-spinning layer when Baxter’s alter ego arrives on the scene—Gil Shepherd, the actor who plays Tom, is in danger of career flameout if Tom doesn’t get back in the story where he belongs. Gil, the “real” actor would seem to be a more appropriate suitor but is soon revealed as a cynical puppet in still another play, one in which studio heads and publicists are pulling the strings. Somehow this strange mixed heritage of business and art, crassness and poetry, is the necessary equilibrium, the DNA of the medium we adore. In his most magical film, Allen keeps all the balls in the air, the ineffable and the mundane, the meta, the metaphysical and the radiantly real. Or should I say “real”? •

Molly Haskell is an author and film critic living in NY. She has taught film at Columbia University, and her books include From Reverence to Rape: The Treatment of Women in the Movies (1974), Frankly My Dear: Gone with the Wind Revisited (2009), and My Brother My Sister: Story of a Transformation (2013).