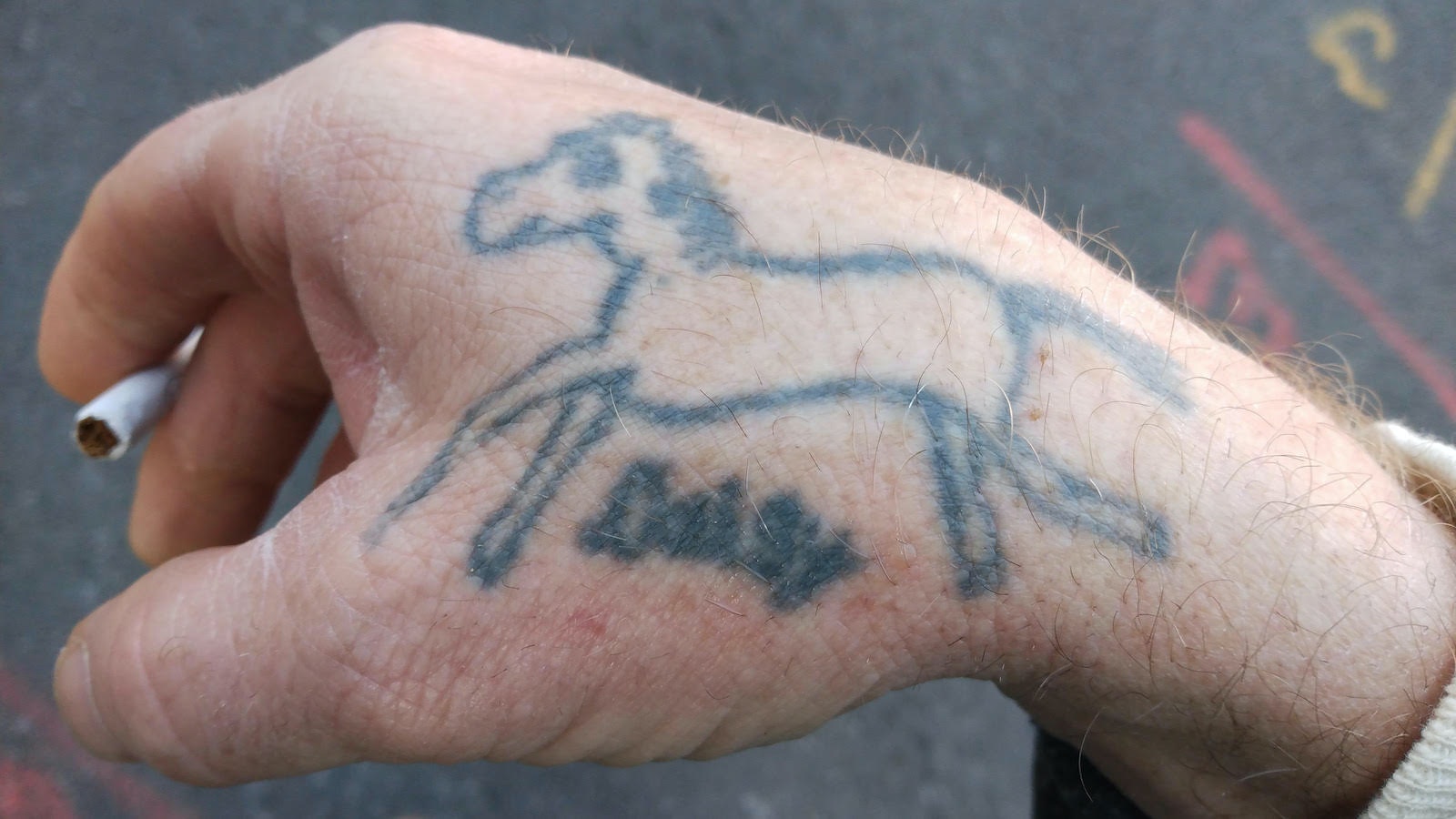 Remembering Kim’s Video, and one of the degenerate treasures found within. 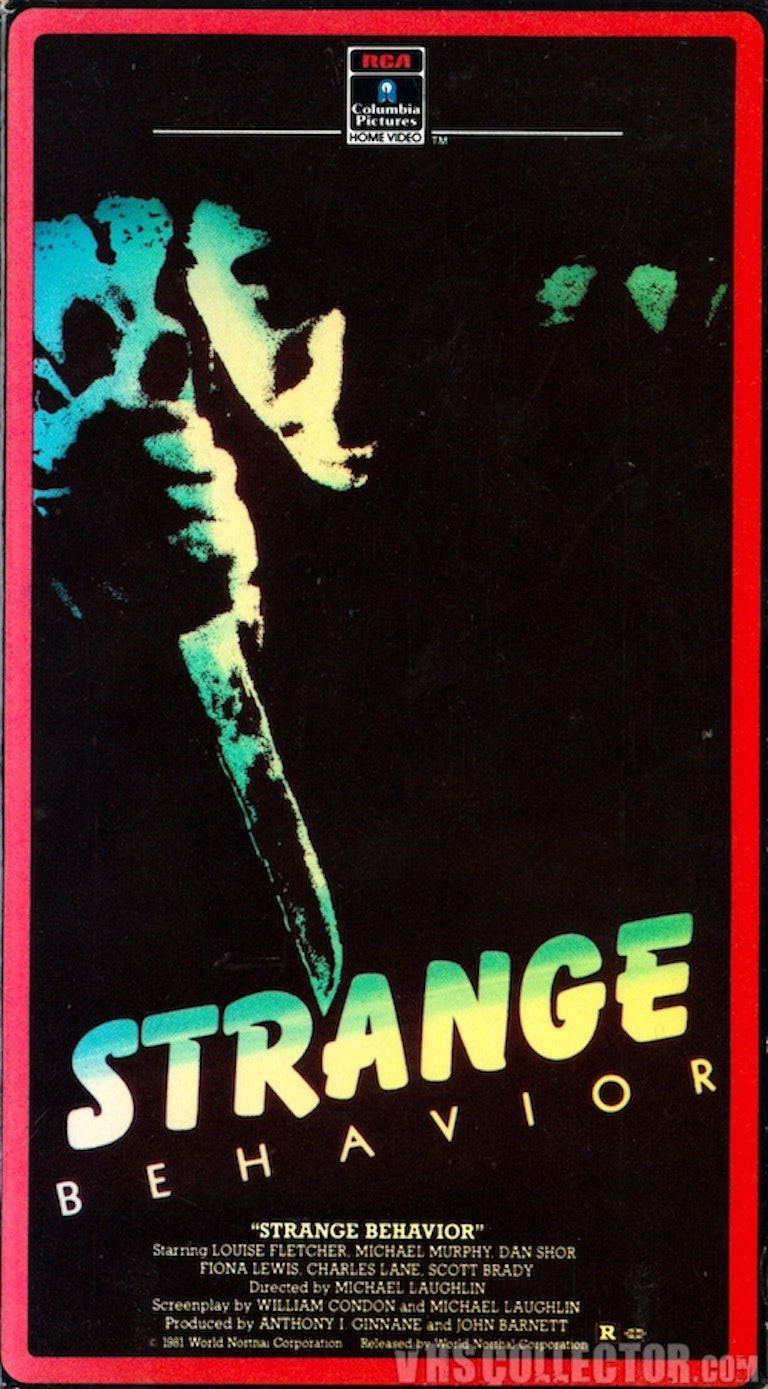 The Place: 6 St. Mark’s Place… Third floor… Towards the rear…

Over roughly 15 years or so in that building on St. Mark’s Place, a tough business was run. The young were abused by the old. The old were especially abused by the young. Abuse and humiliation all round. The four-foot counter, and the power it conveyed, didn’t eliminate any bad behavior. Sometimes, someone would exchange money for a temporary moment with a movie. That was over the counter, sure. And just below the counter, on the customer-facing side, was a little shelf, called Daisy’s Picks. In this already insane place, merchandise was being recommended by a tattoo of a horse located on the hand of a man who quietly ran things on this floor for years. After some time, some of the humans behind the counter might be granted the opportunity to offer tasteful recommendations. They would usually make the rest of the workers in the multi-story complex uncomfortable and angry, since the picks certainly weren’t what they would have suggested in a million years.

We agreed this slender bookshelf could offer about 20 movies that we could all defend and feel strongly about. This group of films rarely changed in the five or six years that I was employed by Kim’s. Neither did the staff. Perhaps now I wish we were less uptight—a little more open. We probably could have discovered many more movies if we had been. Only this past year I finally watched the fabulous Vampire’s Kiss (1988). I would have adored the film all those years ago, but it was not a title we could entertain. Too popular among the unappetizing frat boys. A large number of movies were lost in this trap of association of normal people with bad taste. I couldn’t stomach David Lynch, I couldn’t risk losing my edge. Meanwhile, Robert Greene had been allowed to add Robert Kramer’s Starting Place (1994) to the shelf because we all knew it was a “real” movie; none of us actually watched it, but we all had to concede. I had some work to do.

In this already insane place, merchandise was being recommended by a tattoo of a horse located on the hand of a man who quietly ran things on this floor for years.

I’m pretty sure my first addition to the Kim’s Video Employee’s Picks would have been Strange Behavior (aka DEAD KIDS). The year was 2000, and the movie really didn’t seem to be on the NYC cinephile radar at that moment. I first discovered the film at 17 while working at Video Paradiso in Newark, Delaware. The owners of this oasis (led by the angels Barry Solan, Michael Bradley, and David Ostheimer) had cultivated an unbelievable collection of tapes representing everything for everyone. They also had stores in Baltimore with even more extensive archives; the Roland Park location is featured in a tense chase scene in John Waters’s Serial Mom (1994). Sometimes the stores communicated, and we would trade between locations. So when a very quirky, hairy professor from the University of Delaware asked if we could get this movie, Strange Behavior, I had to first look it up in the VideoHound Golden Movie Retriever to get an idea if it was something we would bother to have, or if I should send this man to Blockbuster instead. The review read:

Well, I knew that two stars were usually more interesting than four. And the cast offered my favorite guy from the Altman movies, my favorite guy from Tron (1982)... Sure, why not? So I requested it from Baltimore and in a few days it arrived. I had to take it home for a spin before I could call the professor who so desperately desired to see this film. 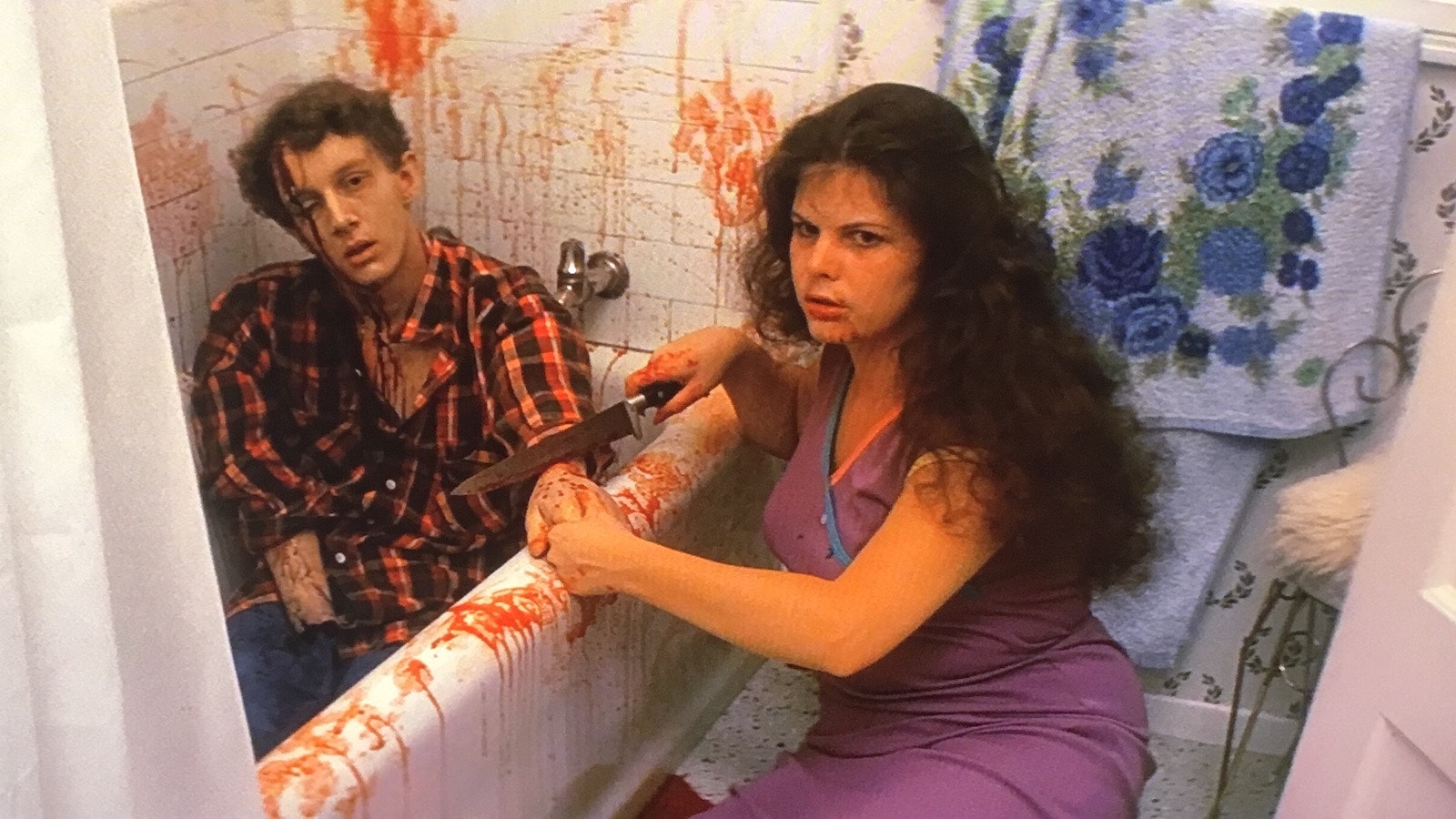 I feel a need (in this once-in-a-lifetime experience of writing on the subject) to address the peculiar attraction, almost fetishistic, of VHS tapes released by RCA Columbia Pictures Home Video, especially circa 1983 and 1984. It starts with the artwork, which had mostly uniform black boxes with red outlines. One spine would continue the black and red with the title in white lettering; the opposite spine would open as a flap, where the tape could be removed. That spine would have the title printed on it, in a custom-designed font that corresponded uniquely to the cover art. Most of the video stores would break these boxes, to make them fit into plastic clamshells which may have housed some sort of security device. Finding these boxes intact in the 21st century is rare. But the uniform darkness of the boxes made nearly every title seem mysterious, even scary! The box for The Man Who Fell to Earth (1976) featured all the most frightening images. Daryl Hall and John Oates’ Rock ’n Soul Live (1983) might be too intense for tonight, honey!

The thing that’s most beautiful about this series of tapes is the transfers from film to video. When I hold one of these tapes today, it’s notably heavier than others of the same vintage. The stock seems to have a sort of density that no other had. And, indeed, you can watch one in 2021 and it holds up perfectly. Just last week I watched my tape of Invitation au voyage (1982), and it just looked like some sort of gorgeous black pudding with melted M&M’s, and the music by Gabriel Yared sounded as though it were playing live, right there in my bedroom. The label put out a very impressive variety of titles. There were some classy ones with subtitles, like Every Man for Himself and God Against All (1974), La Boum (1980), Yol (1982), and Ramparts of Clay (1970). Some classy ones, dubbed, like Going Places (1974) and The Fireman’s Ball (1967; the dubbed version is exactly 314 times funnier than the Czech). And then some not so classy titles: Yor, the Hunter from the Future (1983), Happy Birthday to Me (1981), and Eyes of Laura Mars (1978). There were a few staples, like Eraserhead, Providence (both 1977), and Gloria (1980). There was one title that has maintained an obscurity that I do not understand, Run Stranger, Run (1973), and one title that was born for this tape stock: Querelle (1982). They also released the greatest film ever made, Greaser’s Palace (1972). The inclusion of Strange Behavior in such a catalogue only added intrigue.

I could never have been prepared for Strange Behavior. I still am never prepared. It’s a (partly) accidentally elevated experience. Nothing quite works and yet it all operates in a sideways fashion. I felt like the actors didn’t quite know what movie they were in. I love this sensation. Often you feel it in ’70s Eurosleaze movies that import a drunk, English-speaking has-been into interpreting a scenario that was probably never fully translated. The film was photographed in Scope by someone who may have qualified as an artist, but whoever did the pan and scan transfer was definitely an artist, relishing the opportunity to rewrite the visual language of the film. The frame was cropped in half and even sometimes zoomed in, which gave it all an added weirdness.

I absolutely could not let the VHS circulate back to Baltimore, so I pushed it hard on all of our customers. I think I had the bosses convinced that there was a real following for the movie in northern Delaware. Over the next few years, I worked at different branches for Video Americain, and I always made sure there was a copy wherever I was. In 1998, Gods and Monsters was released and got the respect of intelligent filmgoers. Luckily, it was directed and written by Bill Condon, the writer of Strange Behavior!! Finally I could legitimately push it on people!

Fast forward to NYC, and Strange Behavior was on our TV at Kim’s as we counted out our cash drawers at midnight. We weren’t allowed to count our money during the dance scene at the party early on; that moment is too precious to look away. I should note that the TV in Kim’s was hung from the ceiling about 15 feet in front of the counter, facing us, the employees. Not the customers. To see what we were watching, a customer had to come up to the counter and turn around. Naturally, this arrangement gave us even more confidence that what we put on was for “us,” and not “them.” When I started working at Kim’s, one certain employee took this to an extreme level, going so far as to play contemporary XXX titles during his Sunday morning shift.

That’s how I fell in love with Strange Behavior: in that VHS format, the RCA Columbia Pictures Home Video release with that very active pan and scan transfer. No frame made sense. Seeing it in its proper format clarifies the actions on screen, but only adds questions about the minds and decisions that made up this marvel.

By Sean Price Williams: the face that lunched a thousand chips. 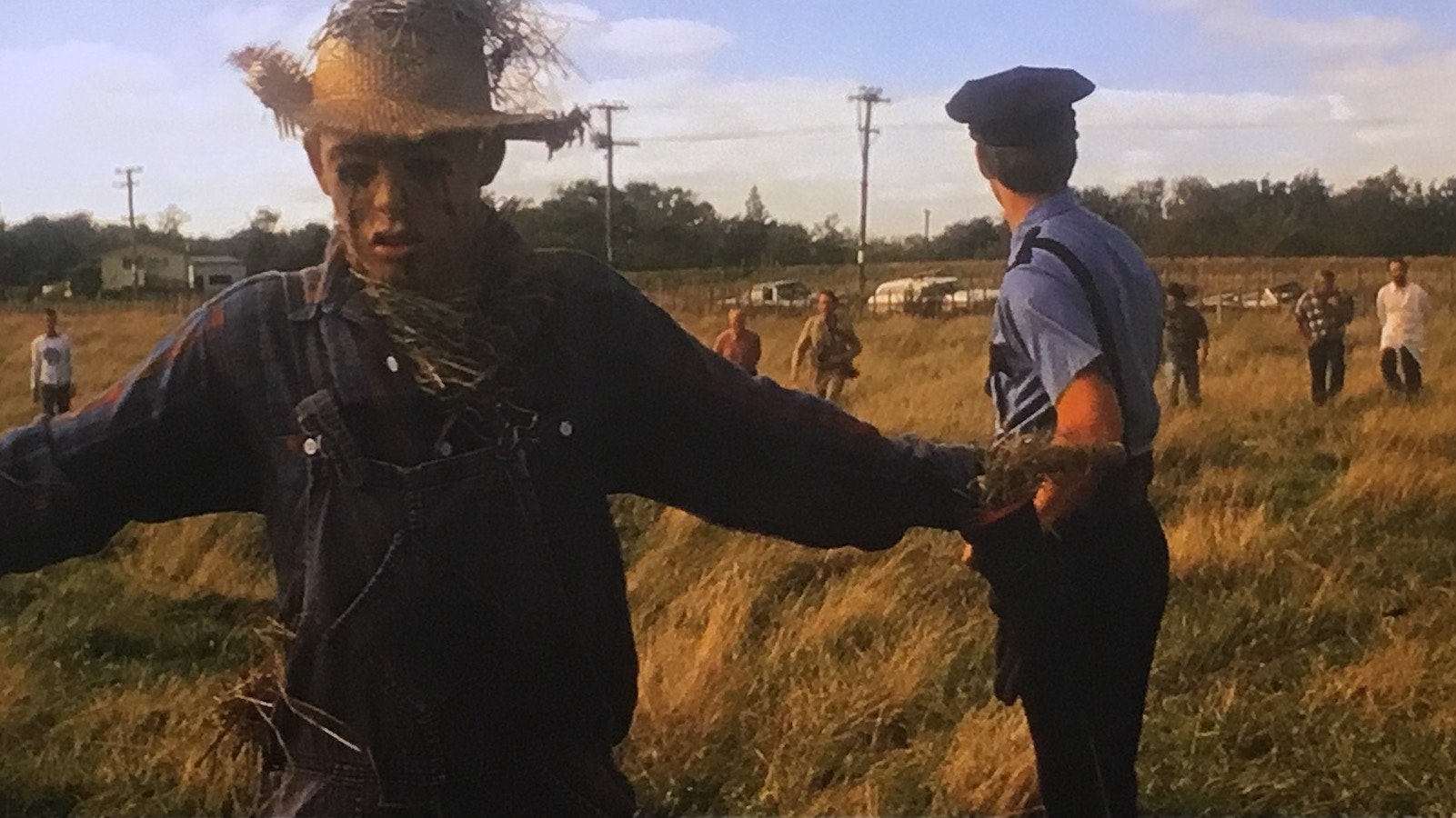