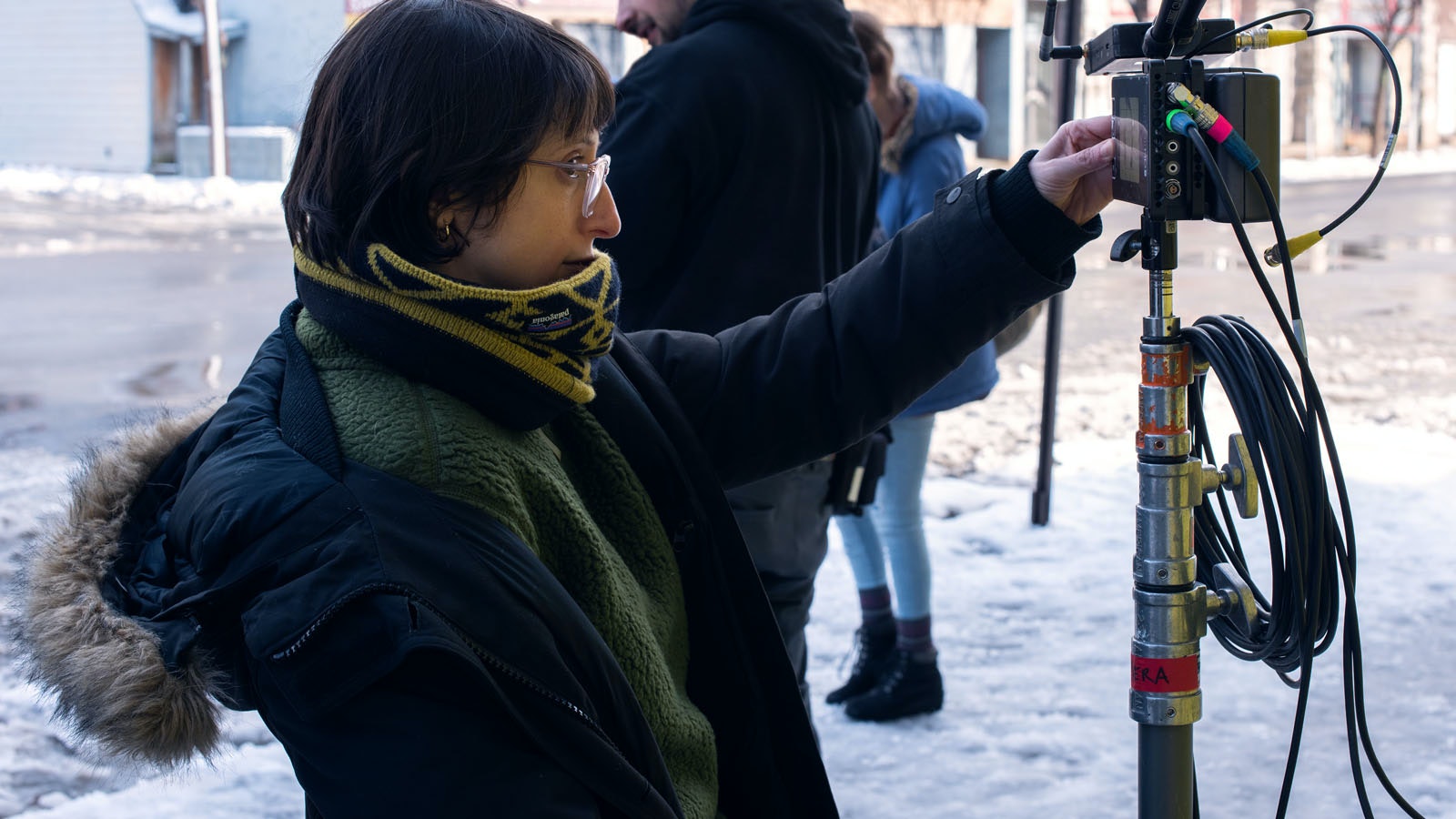 An interview with director Eliza Hittman.

Never Rarely Sometimes Always screens at Metrograph on Saturday, May 14 and Sunday, May 15, as part of It Happens to Us: Abortion in American Film. 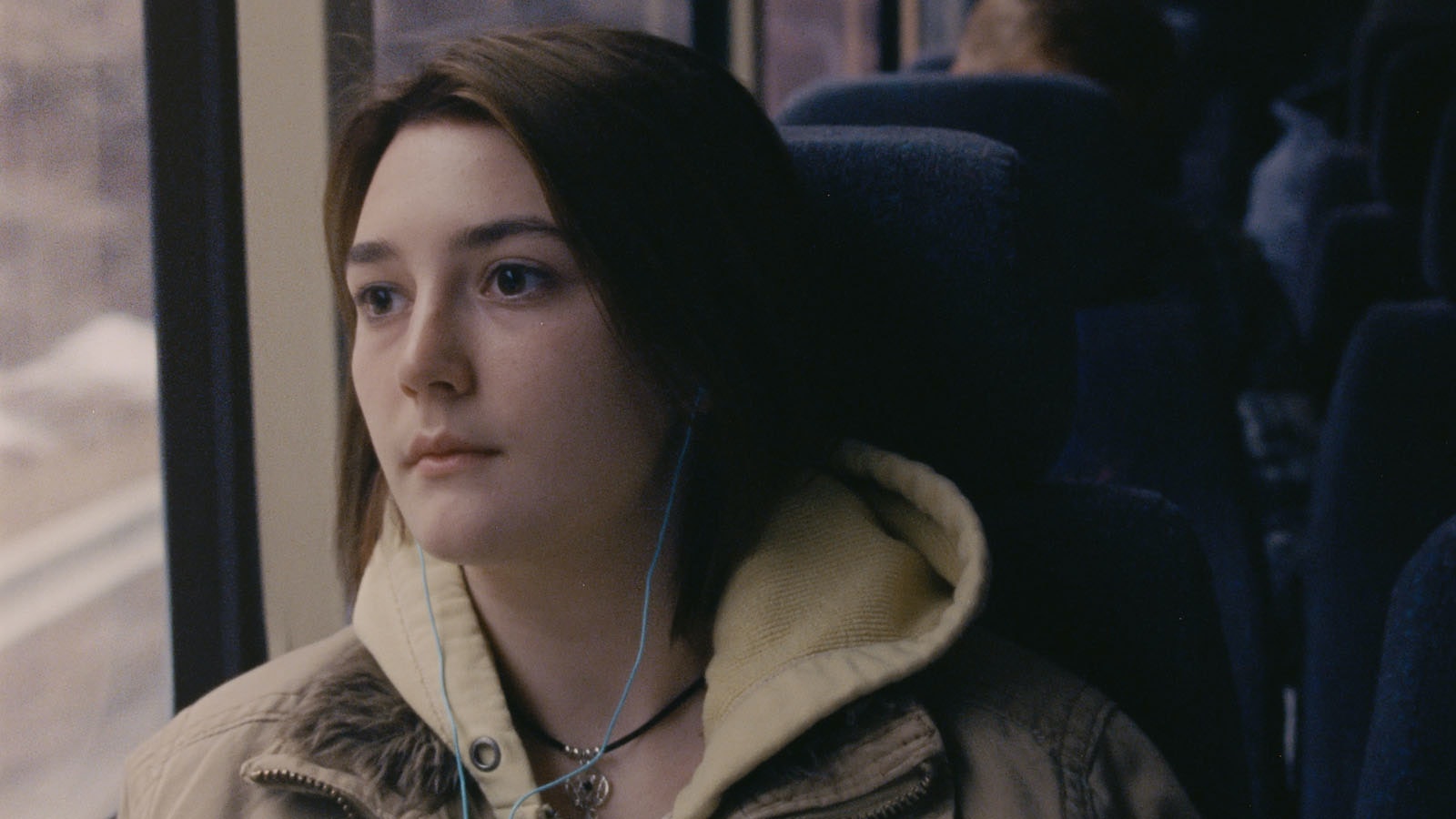 After two well-received independent features, It Felt Like Love (2013) and Beach Rats (2017), New York director Eliza Hittman is giving audiences a new film that feels like her finest yet: the devastating coming-of-age drama Never Rarely Sometimes Always. In the spare, intense film, 17-year-old Autumn must secretly leave her rural Pennsylvania home, with only her cousin Skylar and whatever cash she can scrape together, for New York City, where she can have a legal abortion on her own terms. Hittman sat down with Metrograph in 2020 to discuss her career, Planned Parenthood, and how she gamed the casting process.

The response to this movie has already been incredible. I’m wondering if you feel like you’ve made a progression as a filmmaker with Never Rarely Sometimes Always. Do you think you’ve achieved something huge with this one?

I don’t know if I see it as a new level. I started out making a micro-budget film, It Felt Like Love. I made that for less than $100,000. So to me it was a miracle that a movie like that had the life that it had. It screened in Rotterdam in competition and at Sundance. It had a theatrical release. So few movies of that scale have that much reach. It still surprises me, looking back. And Beach Rats was also a very small movie in terms of budget, so I’m working within a certain model, and there are limitations within that model for sure. Never Rarely... is the same kind of film. I don’t know if it’s better, but it has a bigger canvas, and it explores something that is very timely and urgent. But it’s hard for me to look at my movies like that, because they’re each very unique projects with different processes made at very different budgets.

When I saw this movie, there were some folks from Planned Parenthood at my screening. I was wondering if you worked with them in the making of this movie?

I did. Yes. I consulted a lot with Planned Parenthood and other clinics in order to have an outside points of view, and they were really useful and supportive parts of the research process. And I shot in Planned Parenthoods. They were generous enough to let me shoot three 15-hour days on the weekends at Planned Parenthood.

“Even though it’s private, I think that the act of [AUTUMN] reclaiming her body, her youth, and her spirit is political.”

I am very indebted to them, and they know it. And I was also extremely touched to shoot the procedure in a real operating room.

Have you heard from them? What do they think of the movie?

Yes, definitely. They’re involved in the film a tremendous amount. And I work a lot with Caren Spruch, who has a unique position at Planned Parenthood. She’s in charge of arts engagement, so she’s the person who connects artists who are working on projects that are in film or television that have themes around reproductive care, and she connects them to Planned Parenthood’s to help create realistic depictions of those issues on screen. And she also has this unique position where she interfaces a lot with celebrities who can represent Planned Parenthood at different events. So she’s very immersed in cinema and in the world of the arts. And she was really our kind of chaperone into the world of Planned Parenthood.

Right? But they’re a nonprofit, so of course they can’t technically promote a for-profit movie. They’re supporting the movie in their own ways.

You said that this is the first of your features that deals with a timely, sensitive issue.

To an extent. I think Beach Rats had a timeliness also, in the sense that it deals with white male isolation and anger and internalized homophobia, which was just as timely. But yes, this is slightly different.

Would you say this is a political film?

Yes. I think her journey is political. Even though it’s private, I think that the act of reclaiming her body, her youth, and her spirit is political, through this act. 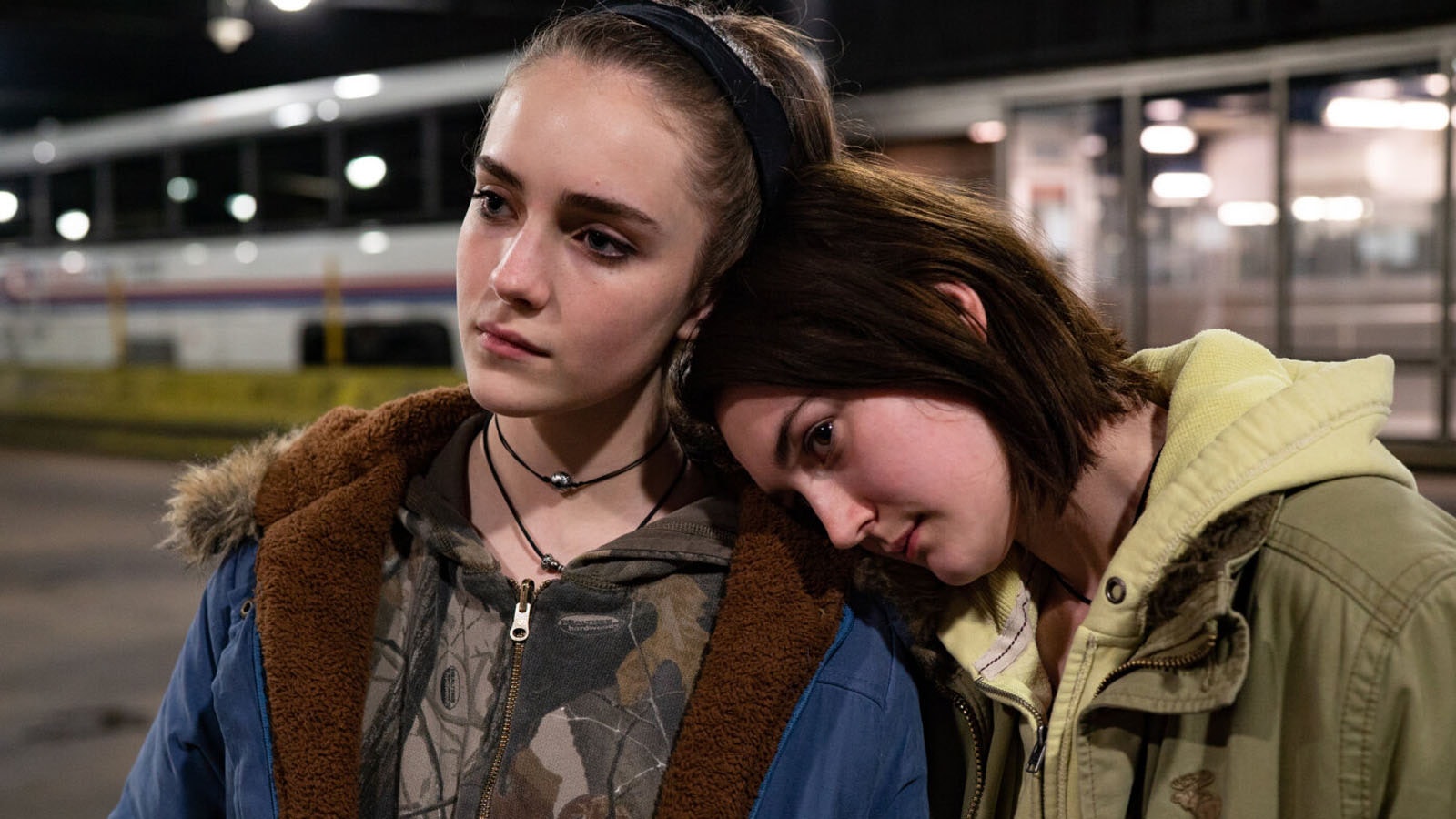 One of the great things about this movie is how you use Port Authority Bus Terminal. Can you talk about the locations? They’re such an essential part of this story.

They are. Conceptually, when I started thinking about this movie, I thought of Port Authority as sort of a base for them. It becomes a microcosm for the city, because they never do anything really beyond stay inside of Port Authority, unless they’re at the clinic. There’s one small diversion in the middle of the night that leads them into Chinatown.

I was just thinking about these two young women on a journey and the time that they spend in liminal spaces like Port Authority, on buses and trains in waiting rooms. I felt like, for them, in some strange way, Port Authority would be a safe place. They’re not here to see the city. There’s a difference. It’s not that kind of movie.

The logic was they could do anything, as long as it was in Port Authority. And especially with this guy who becomes a major character towards the end of the film, who is hitting on them and hitting on Skylar, you know that, in a way, they felt they could protect themselves if they stayed in Port Authority, because the rest of the city was unknowable. They would never follow him downtown. In a way it became this kind of safe space that has police officers and loads of people. It’s contained and it’s protected. That was my logic.

Can you talk a little bit about the casting? Your lead, Sidney Flanigan, is so special in this movie, and yet she’s not a professional actress.

In a very strange way, I kind of wrote this movie with her in mind. I met her at 14 while I was producing another film. She was 14 years old in South Buffalo when we met, and it was really in passing. She was on the periphery of this other movie we were making at the time called Buffalo Juggalos. Her boyfriend was in that movie. We followed her on Facebook and watched her grow up a bit.

I actually wrote her in 2013, when I first had the idea for Never Rarely..., and I asked her if she wanted to meet and she never wrote me back. She was somebody who was always on my mind for this movie, but she had no idea who I was. And it all might come across a little bit creepy, but I watched her videos for years.

What was it about her?

Well, she would post these DIY music videos of herself playing guitar alone in her room at night. She played cover songs, kind of folk covers of punk music. There was just something very captivating about them, something very teenage. For me, they captured the sort of dissolution and feeling of a heartbroken teenager who has become jaded about the world too soon. I just thought she had a compelling energy and look and feeling. And when we started casting the movie, she was in my mind, but I just never thought she would want to do it. Never. She just lives in a very different place, and it was very random that I would reach out to her, but that’s how we met.

The further along we got in our casting search, the less excited I was about the people we were seeing. I knew we had to initiate contact with her, but I had to try not to scare her away. We just had to hope that she would audition. And that’s what we did. My partner who knew her more wrote to her and said, ”We really like your music. We were making this movie, would you want to audition?“ And she’s like, ”No, I’m not really into acting. I’m a musician!“ She was 19 and working in a supermarket, living in a house with a bunch of her musician friends and playing shows in their basement.

Well, first she made a tape with a friend and it was okay. She had never auditioned before. I knew that in order to present her as a viable choice, I would have to help her make an audition. She couldn’t do it from Buffalo. So I begged my producer, Sara Murphy, to fly her to New York for a day, and she agreed to do it. It was the first time she’d been on a plane since she was four. She came to New York and I spent all day in the city with my DP and me, making a visual sketch of the character in the city. That was her audition. And she got the job.

Austin Dale lives in Provincetown, MA. He was previously Assistant Editor at Metrograph. 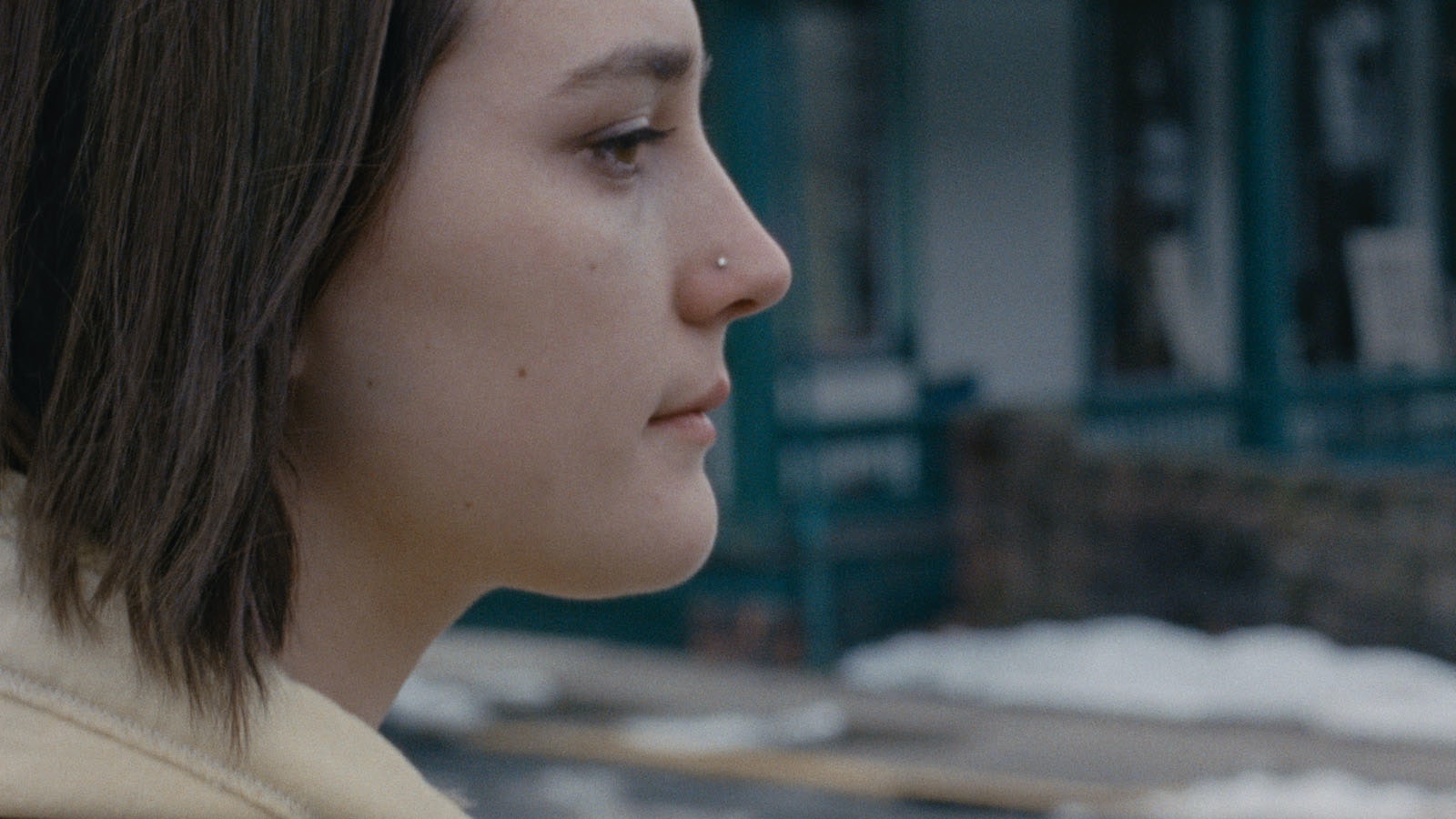