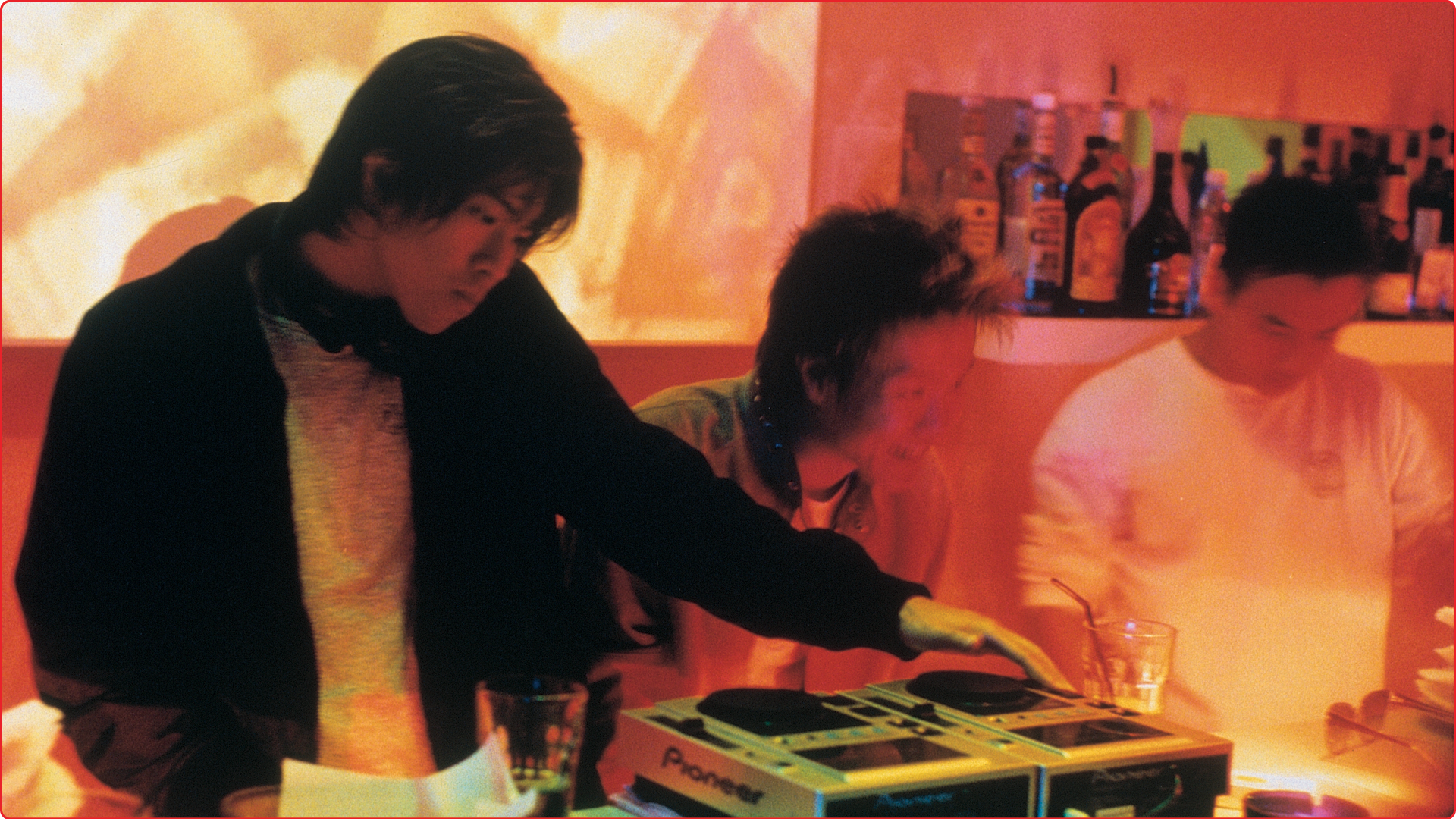 Trancing out in Millennium Mambo and turn-of-the-millennium Taiwan.

The new 4K restoration of Millennium Mambo opens December 23 at Metrograph, both In Theater and At Home.

Cinema struggles when it comes to the after-dark underground of raves and clubs. Casting my mind back, I can think of a bare minute—maybe less—in Lynne Ramsay’s Morvern Callar (2002) that sublimely conveys the punitive intensity of a hardcore techno dancefloor. Human Traffic (1999), a whole film purportedly about clubbing and drugging, features just a single ethereal sequence that evokes the suspended temporality of non-stop Ecstatic raving, but largely avoids the insides of clubs as much as it can. Beats (2019) did better, capturing both the anticipation of the big blowout and the rush felt as the drugs and the music take off in synchrony and the night ignites. But again, most of the action takes place off the ravefloor.

You can see why directors shy away: in a dramatic sense, nothing happens in clubs and raves. In the endless loop-da-loop of the music and the dilated now of MDMA, “nothing” happens over and over again, all night long. The ravespace is a place where music is so loud, conversation is virtually impossible; it’s a sanctuary designed for leaving behind everyday life and its entanglements. At the extreme, a rave is a pre- or post- linguistic zone defined by sensations and intensities: the haptic pressure of bass, the friction and heat and smell of strangers’ bodies. A wild night out is a non-narrative adventure of ephemeral interactions with people, most of whom you’ll never meet again, unless by chance at another club a month or year later. These escapades are only really interesting to those in the thick of the experience. How do you film that?

The young couple’s world is an extension of the unreal life of clubbing and raving: a realm of time stolen from the night, during which the needs of the organism are overridden.

Hou Hsiao-hsien’s Millennium Mambo (2001) is generally characterized as a film that is partially about, or largely set in the techno clubs of Taipei’s rave scene. Springing up from 1999 onwards, within a few years there were around 20 clubs in the city offering a pumping and pounding soundtrack of trance and Euro sounds until 7am. The music was known locally as yáo tóu yuè, a twist on the term for Ecstasy, yáo tóu wán or “head-shaking pill.” As it happens, a relatively small amount of Millennium Mambo takes place on the dancefloor (there’s one Morvern Callar-like sequence that flashed me back to the etiquette of dancing in a crowded club, pressed up against other bodies yet somehow finding a way to move and groove within that circumscribed personal space). But it’s true that Mambo (named, curiously but possibly not coincidentally, after a dance craze of the 1940s) does feel like it exists within the penumbra of the clubbing experience. Partly this is an effect of the sound design and score: a subdued but perpetual pulse of techno music is audible in almost every scene, its itchy twitch of subliminal propulsion lending even the most placid stretches of the film a quality of ambient unrest. There are also scenes in which self-absorbed young men mix records on turntables while cocooned in headphones. But the main reason Mambo feels like all its (non-)action happens within the sphere of nightlife is its lighting and mise en scène. Almost the entirety of the film is artificially lit, taking place at night, or at indeterminate times of day cut off from natural light sources. And nearly all of the film happens indoors, with occasional exterior scenes occurring in areas so built-up and electrically illuminated that they might as well be interior.

Millennium Mambo‘s central characters, a directionless young woman and her borderline psycho shut-in of a boyfriend, are in the business of killing time. Rather than a story, the film consists of a sequence of moments that resemble everyday life in their hum-drum uneventfulness. But what we observe is unlike everyday life in very particular ways. For almost the entire film, no kind of biological function—eating, sleeping, sex—occurs. There’s a grim parody of mammalian intimacy—the monkey grooming its companion—in the scenes in which bad boyfriend Hao-hao (Chun-hao Tuan) paws and sniffs at the passive girlfriend Vicky (Shu Qi). It’s disquieting to watch on its first iteration, initially appearing to be unwanted sexual advances. Then it becomes clear that this is possessive paranoia rather than desire: Hao-hao is looking and smelling for traces of imagined infidelity. The scenario becomes even more unsettling than the unilateral sex that had seemed to be about to take place.

That the couple are locked in an abusive and degrading cycle is established early with the revelation that Hao-hao deliberately didn’t wake up Vicky on the morning of an important exam in order to sabotage her career prospects and ensure she remained his twilight world. Instead of the comforting routines and habits that sustain most people’s boring lives—the stereotyped motions of going to the fridge, filling a kettle, flushing a toilet—their domestic life is characterized by a brittle consumerism marked out by brand names: Johnny Walker, Rolex, Hooj Choons. Needy and greedy, they are perpetually lighting cigarettes, pouring and swigging alcohol, or clearing up the trash from an earlier spate of hedonism. Their lives appear divorced from natural restorative processes like eating and sleeping (although we do see her passed out from drink and drugs). No food ever passes the lips of the model-thin Vicky, while Hao-hao is literally starving himself, so as to be too thin and weak for national service in the Taiwanese military. He smokes crystal meth in a glass pipe to suppress hunger pangs. Existing in what one critic described as a restless state of “frenetic stagnancy,” the young couple’s world is an extension of the unreal life of clubbing and raving: a realm of time stolen from the night, during which the needs of the organism are overridden. The characters are cut off from circadian rhythms. Nature is elsewhere: for almost the entire duration of Mambo, no vegetation or living creature that isn’t a human being is visible, and there’s little trace of weather either. The first of the two or maybe three scenes in which natural light features is almost a shock to the system, reminding me of those grey dawns in the 1990s when I’d emerge squinting from murky, smoky clubs. Vicky suddenly materializes in Yubari, in Hokkaido, the northernmost island of Japan, in a scene in which the brilliance of snow intensifies the sky-lit brightness. The freshness of the location, which reappears later in the film, and her separation from Hao-hao, bring about a reversion to child-like fun and games: faceprints left in a snowbank, the crisp, cleansing cold of the sensation transferring itself sympathetically to the viewer with a delicious shiver. In a sense, nightclubs and raves are a “perverted” route, through technology and chemicals, back to this kind of “in the now,” sensorily-intensified experience associated with childhood.

Natural light, filtered through the windows of an apartment, features also in another idyllic scene, a brief interlude of nurture and guidance offered by an older male character, Jack (played by Jack Kao). Transparently a proxy for the middle-aged director Hou, Jack is a gangster who’s taken a seemingly paternal and non-ulterior interest in Vicky’s welfare. His apartment is a haven of warm, organic hues and calming quiet (this is one of the only scenes in which the constant pulse of techno is absent). Jack cooks a meal that Vicky never touches: she’s too busy fussing with cigarettes and alcohol (he chides her not to drink too much) and restlessly rises to get a spicy sauce to jazz up food whose homeliness seems to be not sufficiently stimulating for her jaded senses. Jack offers Vicky a chance to break out of her locked groove: a boring and less well-paid but stable job in a coffee shop, rather than the strip club where “you earn a lot of money but you spend even more” (presumably a reference to drugs).

Jack also mentions how someone he knows used Buddhist sutras to help an addict quit—an oblique critique from Hou of the Koyaanisqatsi (life out of balance) tempo of modern life. In the end, the improbably kindly gangster may prove to be Vicky’s salvation, luring her to Japan. The film ends with the lustrousness of Nature (jet-black crows glistening darkly against snow) contrasted with the man-made glamor of billboards in Yubari’s “Road of Cinema.”

Watching Millennium Mambo and listening to the listless voiceover (Vicky in the future—2011, 10 years ahead of the film’s original release), an old-fashioned word sprang into my mind: dissolute. Mambo writer Chu Ti’en-wen has identified a fin de siècle (or should that be fin de millennium?) decadence to its world that echoes Hou’s earlier Flowers of Shanghai (1998), set in the luxuriant demi-monde of late 19th- century courtesans and their elite clientele. “The young men and women depicted in Flowers of Shanghai were actually the most fashionable group of their era, just like the young people are in Millennium Mambo,” Chu has said. The dissolution of the characters—their dedication to pleasure, a lifestyle disconnected from productivity and purpose—infects the eye of the camera. If there is an implicit judgment at work in Millennium Mambo, it is undercut by the seductiveness of the hazy, melting shapes and irradiated colors activated by sodium vapor light and ultra-violet. Clubland is a milieu-machine that generates fleeting perceptions and ephemeral tableaux through the circulation of bodies, the barrage of lights and sound, and the chemicals that intensify sensation. As much as debility and damage, Mambo acknowledges the allure of the artificial, the intoxication of toxicity.

Simon Reynolds is the author of Energy Flash: A Journey Through Rave Music and Dance Culture. A contributor to Pitchfork and The New York Times, his blog Blissblog is at http://blissout.blogspot.com/ 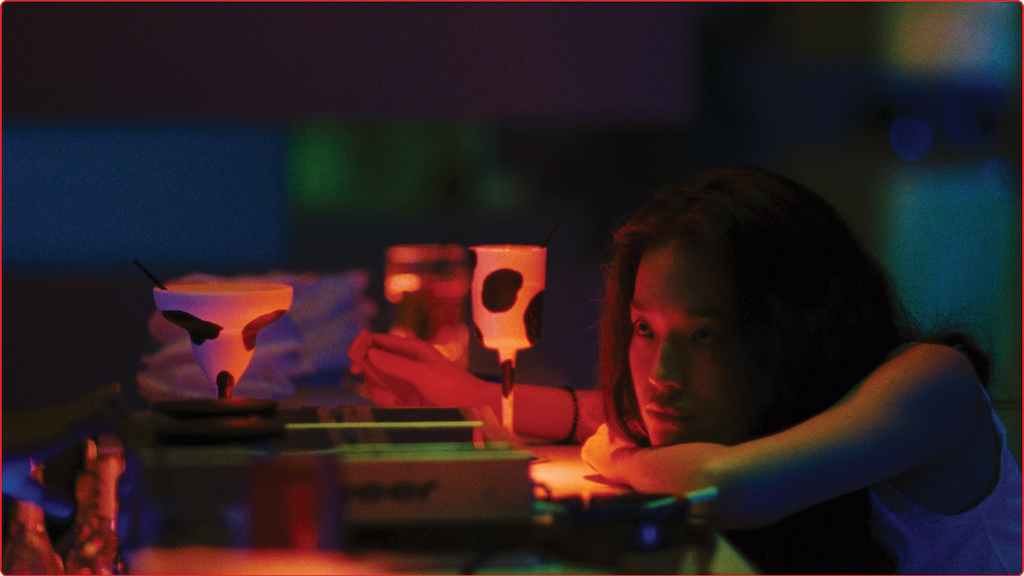 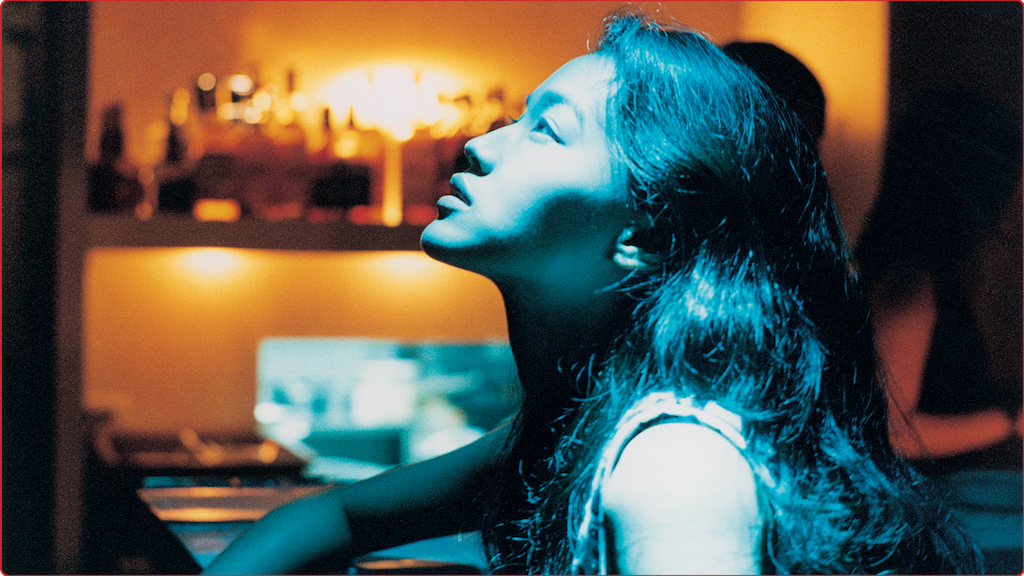