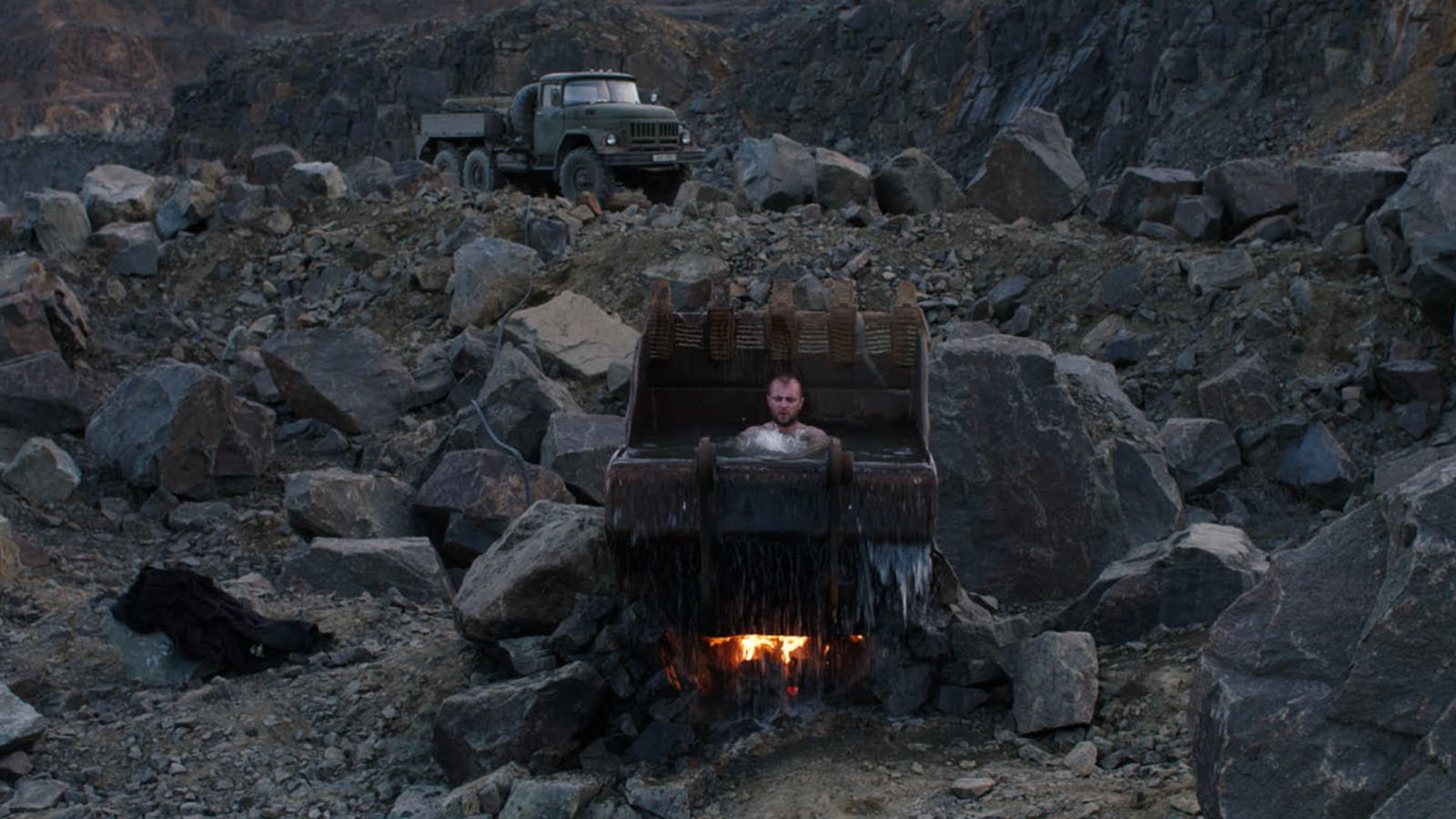 Valentyn Vasyanovych’s meticulously crafted Atlantis fixes its gaze
on postwar fallout in a bleak and lonely, yet not entirely hopeless,
near-future Ukraine. 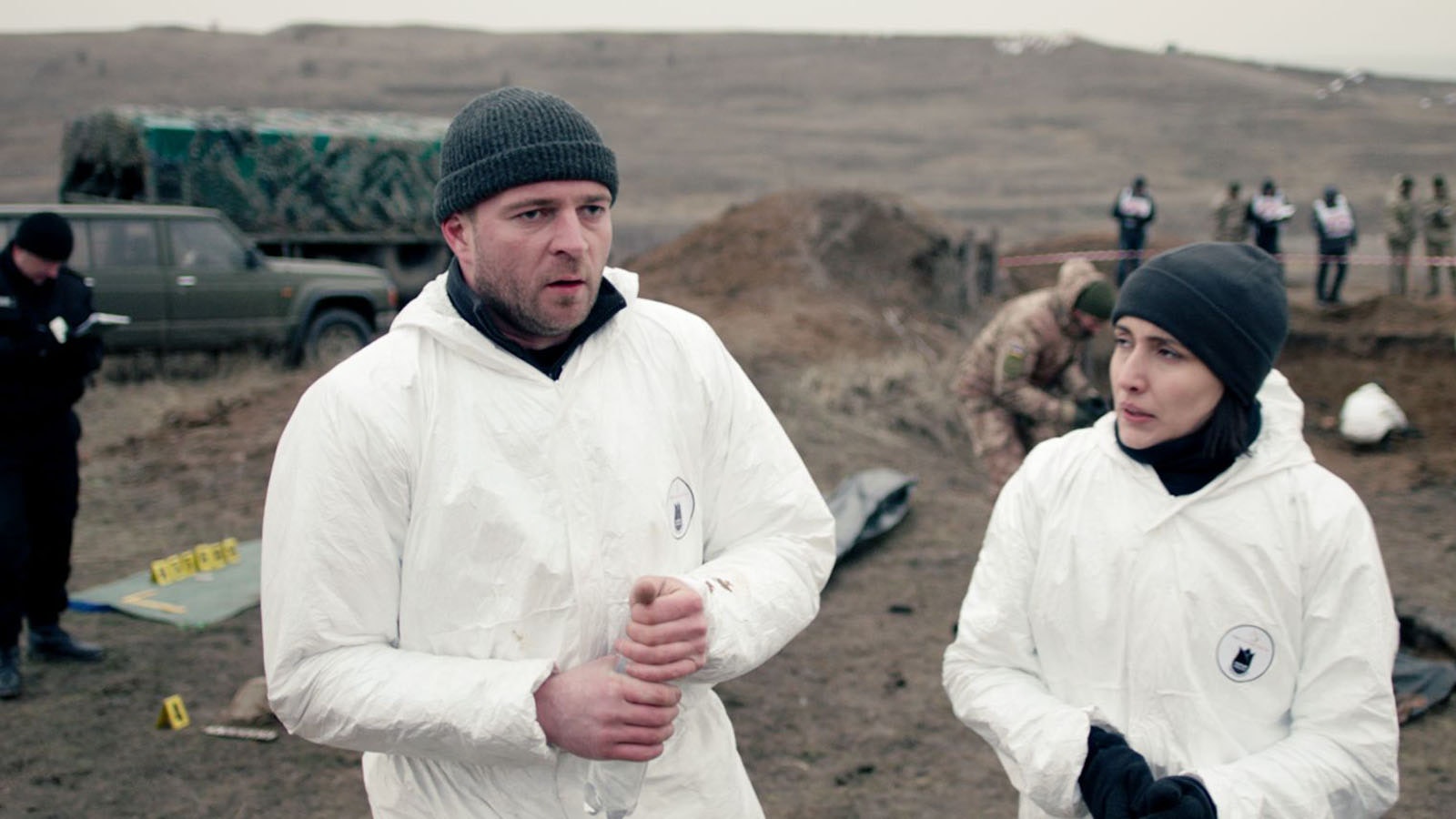 A capsized bulldozer bucket almost blends into the landscape, its teeth as jagged as the earth-toned rocks that surround it. Within a static frame, there is movement: a water supply truck comes to a stop on a nearby road, and a man jumps out, tugging a hose over to the vessel. When he unleashes a torrent of water into it, the bucket becomes a basin; when he ignites some gasoline to heat the water, wild flames simmer underneath like a stovetop burner. The man strips down and jumps into what we now understand is a makeshift bath, an improbable sight within this extraterrestrial-seeming rockpile—but, as he tries to center his breath in the eerie silence, the soak doesn’t quite provide a respite from an inhospitable world.

The possibility of building any future within such a forbidding landscape is the driving question of Valentyn Vasyanovych’s Atlantis, his fourth narrative feature and, after 2017’s Black Level, his second to be selected as Ukraine’s entry for the Academy Awards. Set in 2025, it envisions a Ukraine that emerges victorious from the long-raging war in the Donbass, but instead of standing at the threshold of a bright future, it is a country left for dead: ex-soldiers grapple with PTSD, including protagonist Sergiy (Andriy Rymaruk); factories shutter when foreign investors abandon the country’s steel-based economy, which costs Sergiy his job; long-abandoned Russian mines are still being excavated and detonated, poisoning the country’s water sources; and scores of unidentified soldiers’ corpses are still being exhumed from the combat-torched terrain. Yet even as Vasyanovych lays bare the economic, ecological, and psychological tolls of the conflict, the idealistic connotations of the name “Atlantis” aren’t entirely ironic; instead of deserting a homeland that’s fallen to ruin, his characters dream of creating something habitable within the wreckage, and cling to the convictions that led them into war in the first place. 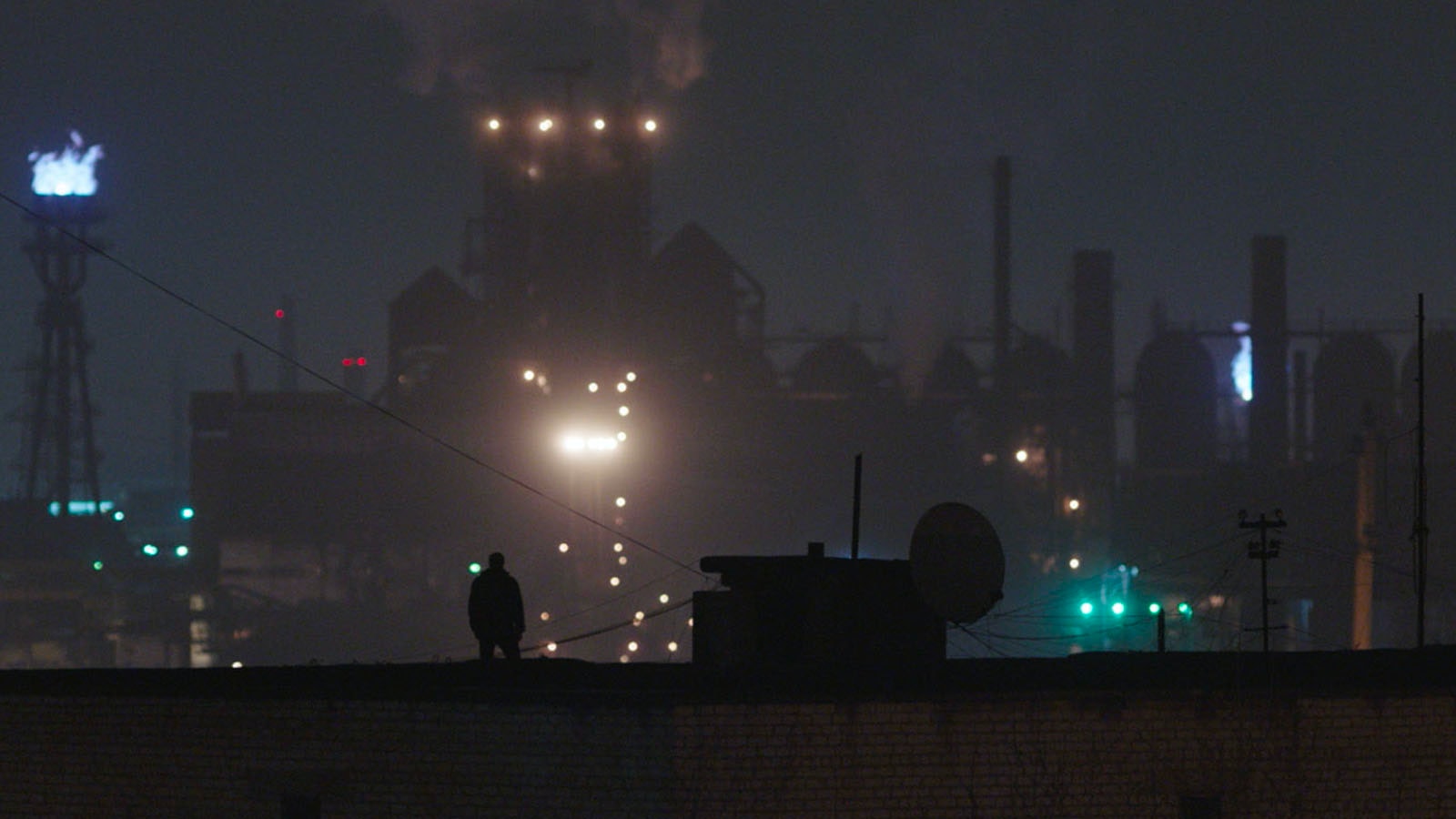 The barren wasteland in front of them makes this goal seem optimistic at best, delusional at worst—and those postapocalyptic vistas represent more than mere speculation. While Atlantis, as science fiction, shares a visual sensibility with more stylized works arising from the post-Soviet zeitgeist—fellow Ukrainian Sergei Loznitsa’s hellish picaresque My Joy (2010) also unfolds within a purgatorial tundra, while Aleksei German’s Hard to Be a God (2013) dwells in visceral mud, acid rain, and filth—Vasyanovych’s approach is more anthropological. Instead of exploding present-day trauma into an extreme dystopia, he collects the elements of his imagined future that are already evident: also serving as the film’s cinematographer, he captures muddy vistas, broken-down machinery, and bombed-out factories in observational, fixed tableaux. He extrapolates the environmental consequences of wartime devastation when Sergiy finds work transporting clean water, a scarcity, to military outposts. And Vasyanovych took care to cast nonprofessional actors who share occupational backgrounds with their characters, from paramedics to ex-soldiers, many of whom struggle with PTSD in real life. To look forward, in Vasyanovych’s view, really means to look more closely at the present and recognize the groundwork for the future.

Yet within that dire prognosis, Atlantis is a work of deep humanism. During a post-screening Q&A at New Directors/New Films last month, Vasyanovych described his proclivity for patient long takes as a way of drawing out the mood of a scene, a technique familiar from Black Level and his aesthetic as the DP for Myroslav Slaboshpytskiy’s The Tribe (2014). To that end, the film’s 28 shots are staging grounds for the characters’ dormant emotions to reveal themselves over time: there’s a lonely anxiety to early scenes depicting Sergiy at home in a miserable, underfurnished studio apartment; staring into space, he turns a light on and off in the darkness of night, while industrial buildings weakly illuminate the skyline out the window. A few days later, his morning routine before heading to the factory builds from the depressing mundanity of ironing his pants on his desk—the sole flat surface in the room appropriate for the job—to an explosion of aggression, as he rams the iron down on his thigh and beats his chair to a splintered pulp. While violent outbursts like these fill the first third of the film—an early target-practice scene with Sergiy and a close friend from the military ends with the latter sustaining a shot to his bulletproof vest—all of this behavior finds clear antecedents in trauma, whether the toll of combat or the unprocessed pain of grief. 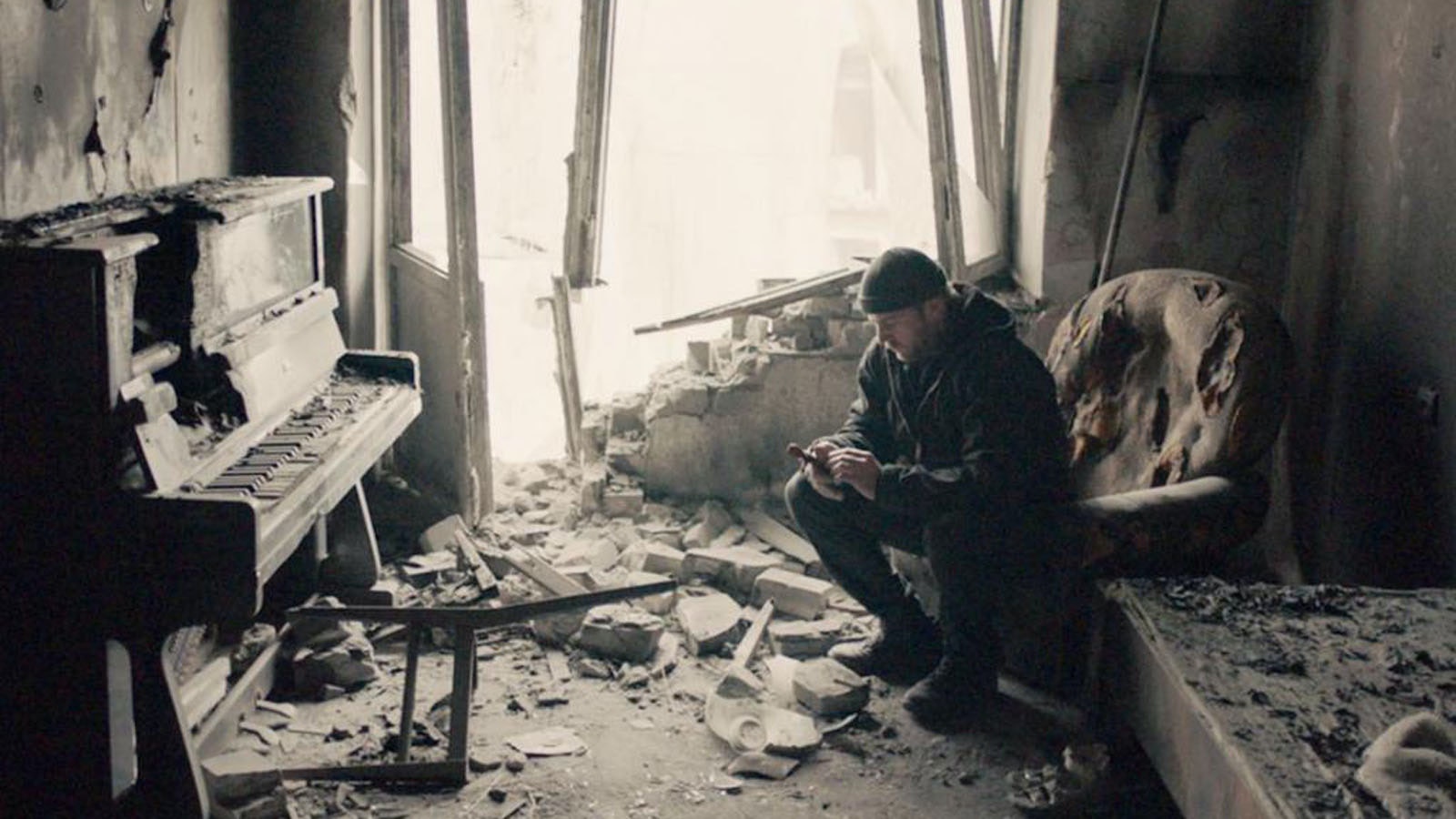 For a film so suffused in death, Atlantis does not trivialize its war’s body count, but emphasizes the weight of mortality through its rhythm. The first time the film breaks from a stationary vantage point, it’s to take a moment of silence when Sergiy’s friend succumbs to PTSD; after he jumps from his factory’s balcony into an abyss of metallurgic hellfire, the camera tilts down to contemplate the fading cloud of smoke in his wake. And unvoiced casualties come to the fore when Sergiy’s water-transportation job leads him back to his prewar apartment building. Drawing out Sergiy’s queasy anticipation, Vasyanovych tracks behind him up the stairwell until he comes upon a flat reduced to rubble: shards of glass from a smashed TV, a piano with a gash in the middle, stuffed animals covered in ash. The traces of life in these rooms evoke the uncanny postindustrial landscapes of Nikolaus Geyrhalter’s 2016 documentary Homo Sapiens, whose abandoned buildings overcome by vegetation seem eons away from human activity. But by bringing Sergiy into the space, the destroyed room poignantly evokes the edges of his memories; as he retrieves a pair of baby shoes from the rubble, the hint of his past is more painful than any explication of whom he’s lost.

Ultimately, this reckoning with the dead gives a greater sense of responsibility to those who were lucky enough to survive. Halfway into the film, Sergiy meets a medical volunteer named Katya (Liudmyla Bileka), whose vehicle has broken down en route to a morgue: she is a member of the Black Tulip group, a real-life organization in East Ukraine that exhumes wartime corpses for identification and proper burial. Over a meal, Sergiy remarks that this project must be difficult to endure: her day-to-day is grisly, as she and her team take methodical inventory of each partially mummified body’s belongings and injuries. But Katya, a former archaeology student, views the practice as a way of paying respects to contemporary history in real time; with each excavation, she explains, “we let the dead say goodbye to their relatives, finish their life story and their war. It’s important.” In scenes like this, by so thoroughly cataloging the cost of war, Atlantis assigns a deeper, unsentimental significance to the act of rebuilding. Vasyanovych bookends the film with imagery from thermal cameras—the first footage documents a body buried alive in combat, the other finds Sergiy and Katya in an embrace at the beginning of a romantic relationship—to capture that duality; it would be disingenuous to look away from the violence, but even in the bleakest of circumstances there remains a fragile drive to continue.

Atlantis doesn’t feel trite in this hopefulness because it doesn’t gloss over the gravity of the situation. When Sergiy is offered a job overseas with an ecological monitoring firm, the company’s representative, whose life Sergiy saved during the war, insists that Ukraine is at an economic dead end, as its terrain will cease to be habitable within a decade. After fighting the war, though, Sergiy shares Katya’s feelings of obligation to his home. Writing about the postindustrial landscapes of the Zone in Andrei Tarkovsky’s Stalker for Strelka Mag, Ryan Madson poses that the sight of human-made destruction reminds us of a “need for atonement” by bringing us face-to-face with a world that will outlast us. The industrial processes on view in Atlantis are nothing short of primeval—lava-like liquid cascading out of a bucket down a rocky slope, cars bursting into flames, violent bone-soaking rainstorms—and it seems a stretch to picture life easily springing up again. But when we see what it means to die, and to be collectively responsible for our own undoing, then what does it mean to regenerate? In an apocalyptic tableau, a human figure moves. •

Chloe Lizotte is a writer based in New York. She is a regular contributor to Reverse Shot and Screen Slate, with additional bylines in Cinema Scope, Film Comment, Vulture, and the Los Angeles Review of Books. She has also worked with the Tribeca Film Festival as an Assistant Programmer for their New Online Work section. 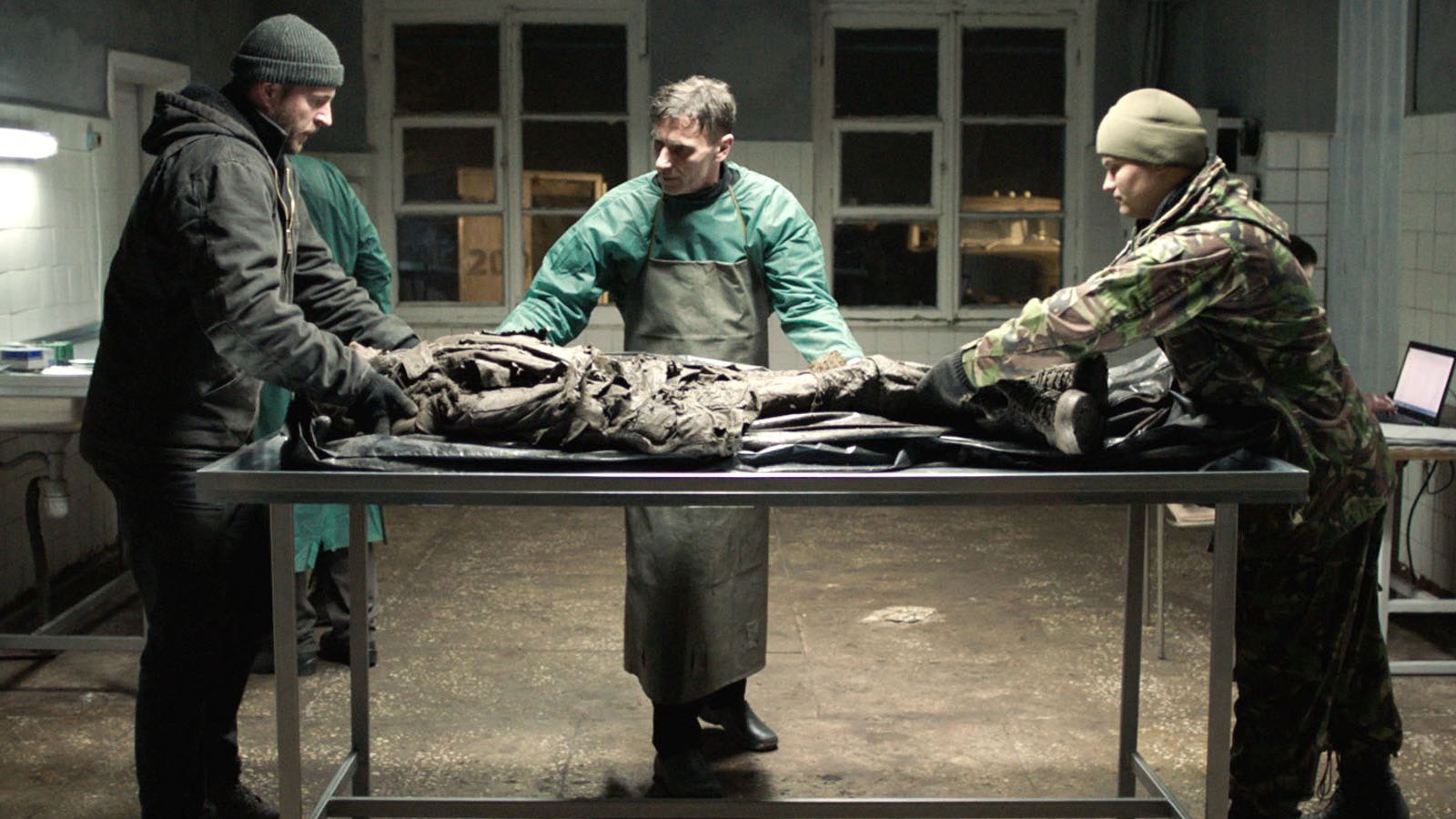