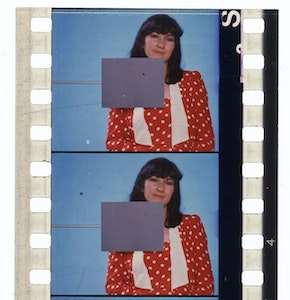 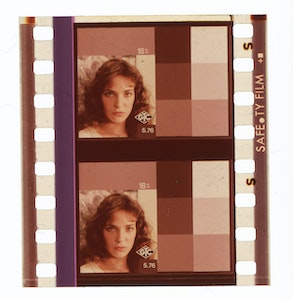 Used by film laboratories during processing and printing, the images known as “leader ladies” or “china girls” usually feature a woman seated mildly next to a color chart, although the variations (as you will see) are seemingly endless. A few frames of these images often appear among the countdown on release prints, a leftover from the laboratory processes for which they were required and visible only to those who handled such objects—projectionists, archivists, and collectors. Once mere calibration tools used in photochemical film production, they have come to represent something much more, the residual traces of the work that went into the creation of cinema for over 100 years.

Their presence on film prints (secretly sharing space with Hollywood’s starlets) is a fleeting visual document of the film industry’s vast off-screen labor pool. They remind us that every film made on film stock has a physical history, that each print we encounter in the projection booth, or projected onto the screen from the audience passed through the hands of lab workers and technicians before it came to us. From experimental structuralist shorts that question the very nature of physical film to a fiction feature about the weirdos who sweep up popcorn at a ’90s art-house cinema, this program is a celebration of the unseen, the forgotten, and the vanishing laborers of analog film. It’s a program about work done and lives lived, and the regular people who make cinema happen.

The Chicago Film Society has maintained “The Leader Lady Project,” an online collection of leader lady images since 2011, with the help of contributions from projectionists, archivists, film collectors, and film enthusiasts around the world. You can visit it here: leaderladies.org.

We hope these leader ladies inspire you to seek out analog film in your city and town, wherever it may be. It’s usually out there if you look hard enough, and if it’s not... you can always start a film society.—Guest programmer Rebecca Lyon of the Chicago Film Society

***All features preceded by snipes* from the CFS collection.***

*A snipe is a clip that is run before a feature presentation or during an intermission. Unlike other preshow content—trailers, newsreels, cartoons, and short subjects—which primarily serve as entertainment, snipes serve a functional purpose, such as advertising, making notifications, or structuring other content. We love them. These snipes from the CFS collection were generously scanned by our friend (and snipe expert) Walter Forsberg. The scans are “edge to edge,” allowing you to see the perforations, soundtrack, and some markings and bits of Scotch tape in between the framelines.

Vintage 35mm policy trailers from the 1980s produced by WLS in Chicago, featuring the late, great radio DJ Larry Lujack. You’ll never misbehave at the movies again. These were generously lent to us by a private collector specifically so we could scan and share them. You can see Larry before screenings of Mary Jane's Not A Virgin Anymore, Henri-Georges Clouzot’s Inferno, and Death Proof.

Includes Girls on Film, Murder on the Screen, To the Happy Few, and Releasing Human Energies.

Jacobson’s only feature chronicles the sexual travails of a high schooler who works with punks, drunks, and losers at her local indie cinema.

Ronald Bronstein plays a divorced father juggling his unraveling love life and his job as a NYC movie projectionist during the few weeks that he has custody of his two young sons.

Tarantino’s homage to ’70s exploitation gives most of its screen time to its character’s prospective victims (and features a series of leader ladies edited into its end-credits bounce).

Leader ladies or china girls, usually visible only to those whose job it is to handle film are made public here. Includes China Girls, Film in Which There Appear Edge Lettering, Sprocket Holes, Dirt Particles, Etc., Second Sighted, and Love It/Leave It.