Ulrike Ottinger is perhaps the major female filmmaker of New German Cinema, though she has received far less notoriety than peers like Rainer Werner Fassbinder and Werner Herzog. Despite her reputation as a renegade outside the movement, Ottinger’s forms and preoccupations are in tune with her colleagues’. Fassbinder’s films, too, were queer and stylish, intertwining a love for classic cinema with a rigorous social consciousness. But from the first frame, Ottinger’s movies just feel different: more alive, more joyful, more willing to dive blindly into contradictions or to push two disjointed obsessions to a point of conflict.

We should probably start with the lesbian pirates. 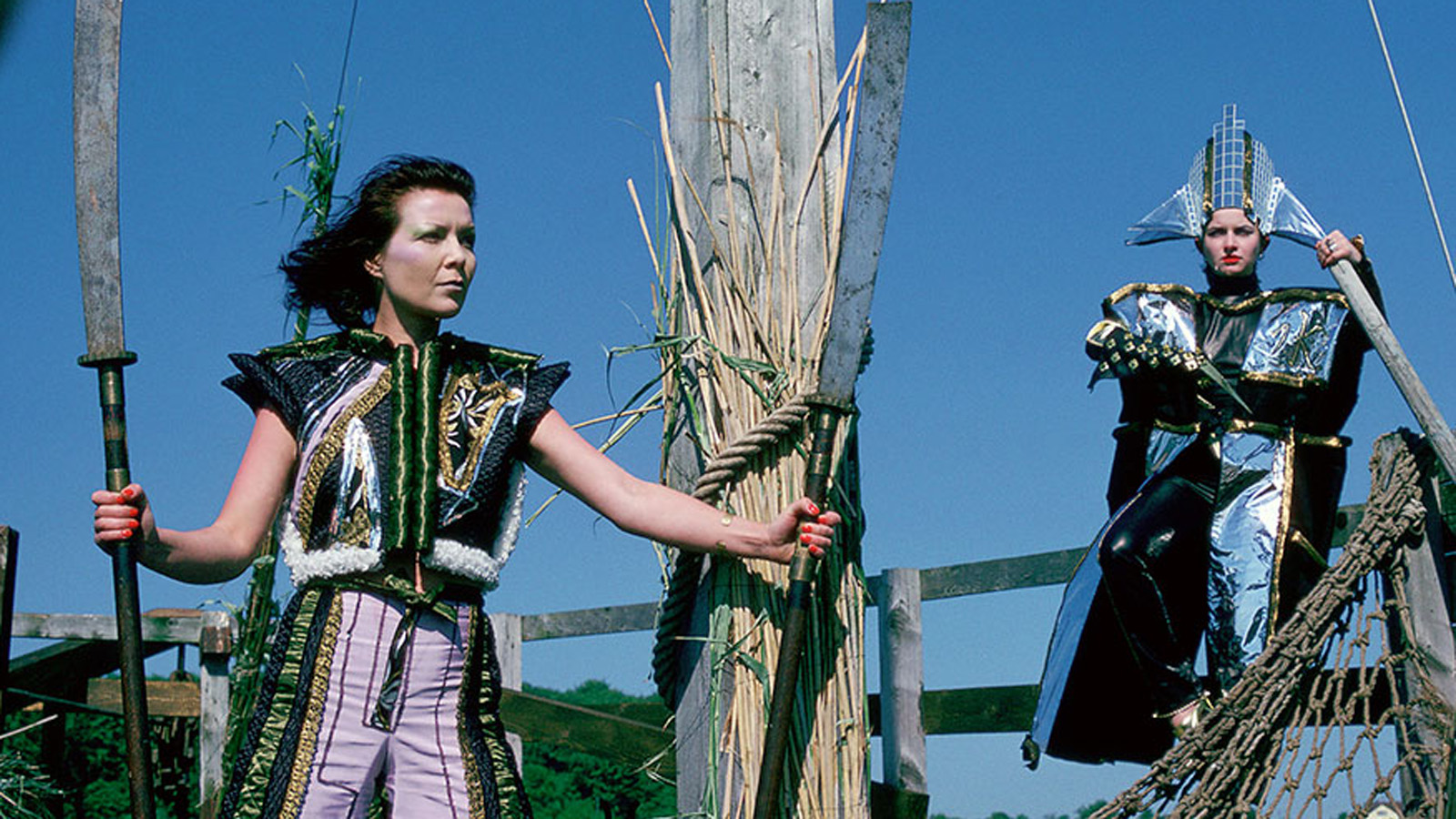 Madame X: An Absolute Ruler is the story of a group of swashbuckling women aboard a ship who pillage, have sex, and command nature and self-mythology to their will. Ottinger, openly lesbian from the beginning of her career, fantasizes about a world where men seem like intrusions or rats to be eschewed in favor a ship that becomes, at various points, a sanctuary, a battalion, a commune, and a sex dungeon. The makeshift pack recalls John Waters’s family of the “filthiest people alive” in Pink Flamingos, with a matriarch leading the group through delightful acts of perversion. Each scene is propelled by an eagerness for acceptance, reaching its aesthetic climax in a small moment when The Shangri-Las‘ ”Leader of the Pack” plays as a butch motorbike gal holds another woman, in a skintight bodysuit, picking her nails with a knife. Such a proudly sapphic gesture is nothing short of a gift.

Other women directors from the canon, like Agnès Varda and Chantal Akerman, share Ottinger’s anger and lust, but a better point of comparison may be the radical ecstasy of the late Barbara Hammer, whose work Dyketactics speaks to a reformation of cinematic vernacular as a response to traditional avant-garde practices. The titular Madame X, eyes closed in all her spiky punk glory on the ship’s masthead, is not just an aestheticized body but a woman in total control of her own perception, and it is exhilarating and true and real. 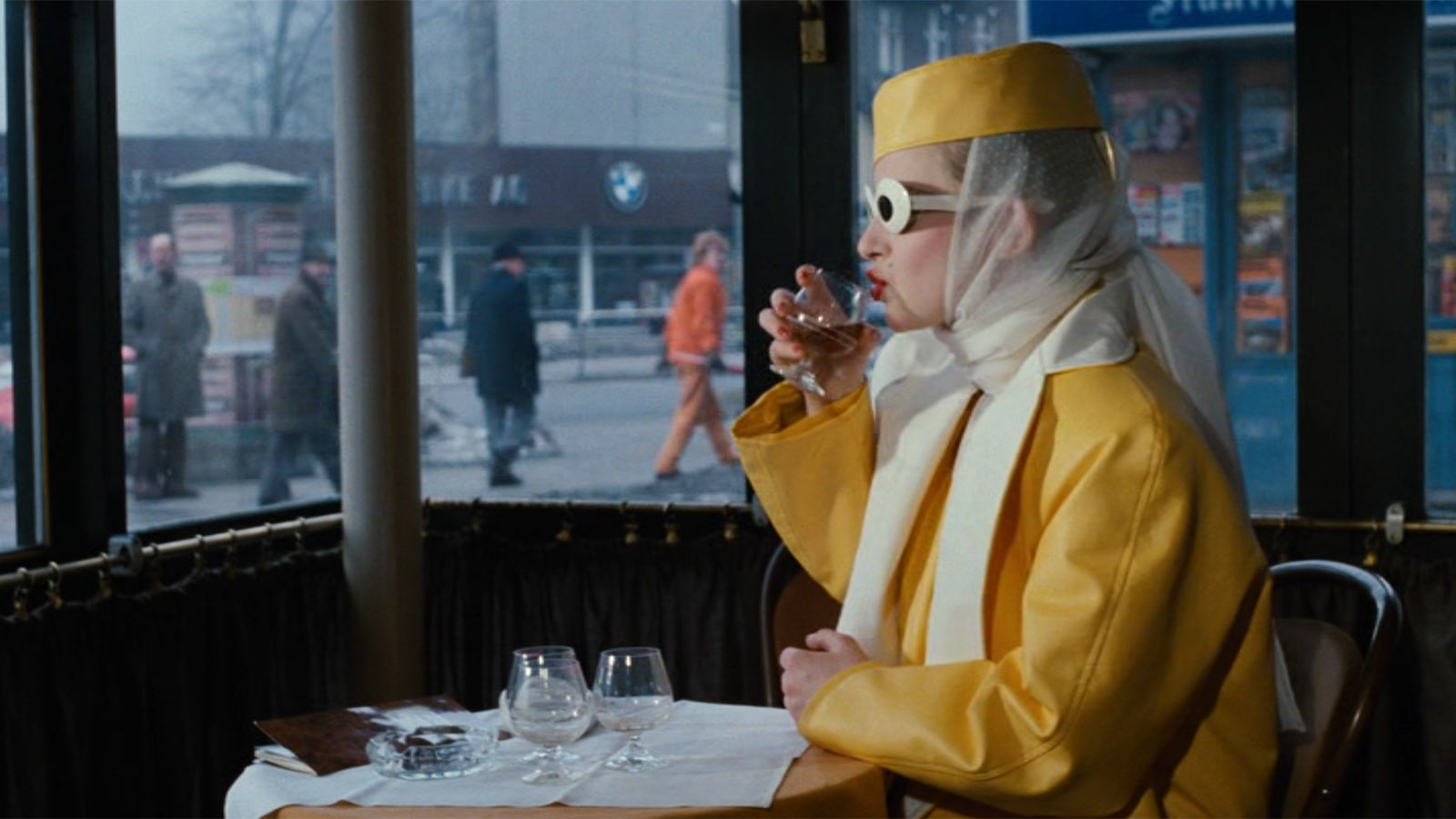 Ticket of No Return

Ticket of No Return is Ulrike Ottinger’s most focused work. Its original title was Portrait of a Drinker, and it is a woozy, gorgeous, sad film about drowning out the stimuli at the edge of the frame. Ottinger, who studied painting in Munich and Paris before turning to photography and eventually film, does her own cinematography. From the sun-kissed golds of Madame X: An Absolute Ruler to the deep greens of Ticket of No Return, all of Ottinger’s films have a breathtaking color palette, and the greens are crucial to evoking a superficial pleasures of the life led by the perpetually intoxicated protagonist.

Ottinger’s films are so coy they are often called parody, but that feels inadequate and misleading. Ticket of No Return is “about” Germany in the era of the Berlin Wall; just like the unnamed woman at the center, it never directly confronts the political dissolution of its setting, preferring to drown it in booze and hazy spectacle. The great actress Tabea Blumenschein, who passed away in March, is the core of both Madame X: An Absolute Ruler and Ticket of No Return’s artistic success. Her eyes command the frame, changing the entire compositional direction of a shot by simply looking in the other direction. As parties and nights and backlit shadows blur into one another, she remains staggering through it all, eventually emerging as a symbol of the city of Berlin itself. Thus Ticket of No Return becomes Ottinger’s first film concerned mainly with a place as a personal prospect, an identity that cascades onto all its inhabitants and visitors. 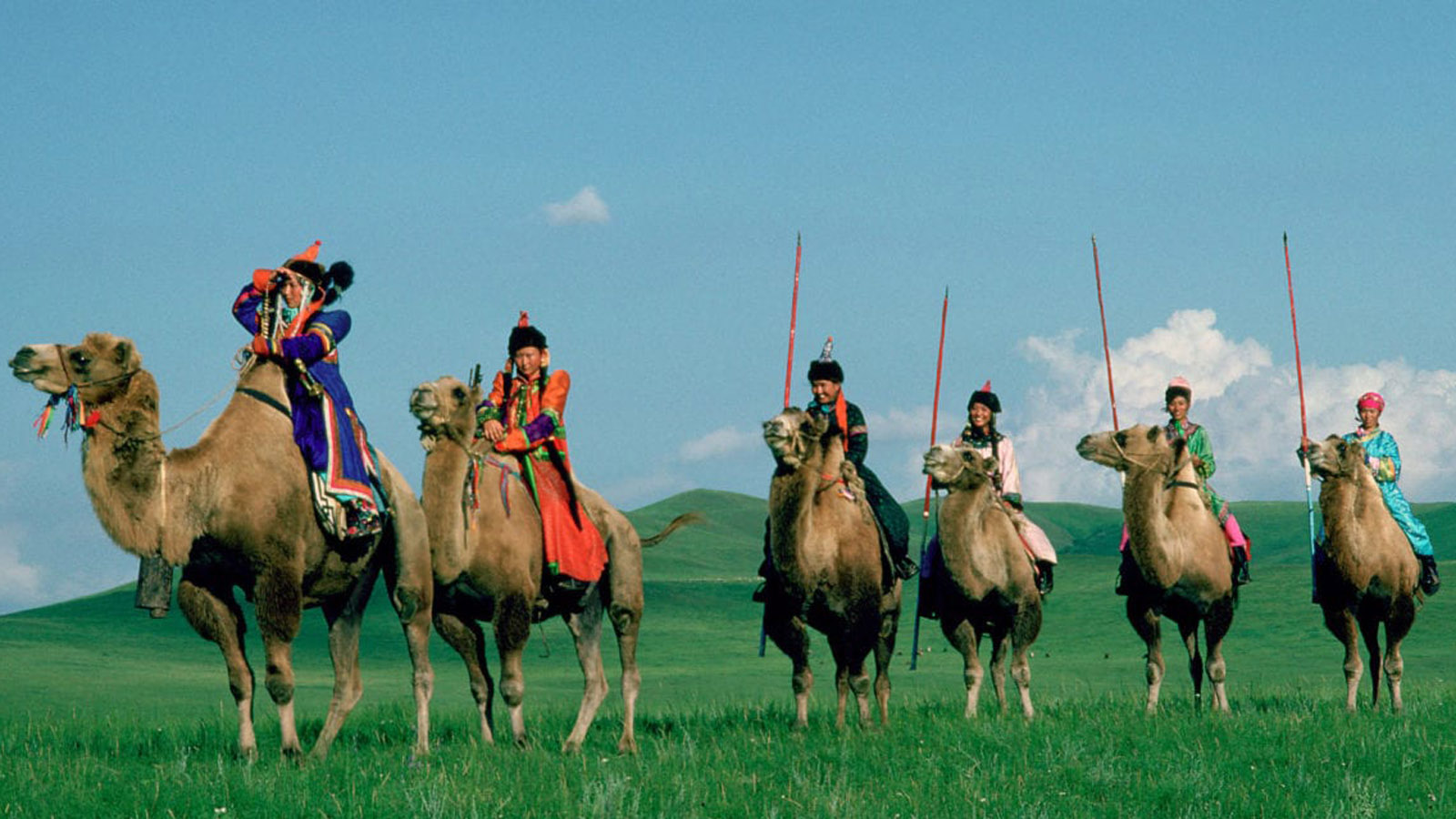 Joan of Arc of Mongolia

In both her documentaries and her fiction work, Ottinger gives ample time to the rigorous recording of customs and peoples. Each of Ottinger’s films begins as a massive scrapbook, with images, travel notes, and diagrams. Joan of Arc of Mongolia was not the first of Ottinger’s films to deal in ethnography, but it complicates that study with its overwhelming panache.

Camp is not a disrespectful act, at least to Ottinger, but it can be a dangerous one. After all, it’s a mode of performance about the artificiality of appropriation; the entire genesis for Madame X: An Absolute Ruler’s conceit comes from legends of Chinese women pirates. Ottinger’s films involve a cornucopia of lavish costume designs and ironic digressions, all in the name of absurd self-expression. This same lens, which guides her vision of a gloriously independent femininity, also suggests that “claiming” another culture is impossible.

Joan of Arc of Mongolia begins with a Buñuelian comedy of manners about Western post-war showbiz types aboard a soundstage train. It then gives way to its gorgeous middle section, a glowing fantasia of set piece after ritualistic set piece. Ostensibly the story of a group of passengers taken hostage by a traveling people, the joke is that they are so willing to tag along and so welcomed by their captors that it puts the audience in a state of timid reverence. There’s a firelit ceremony at dusk as the princess sings a song of the afterlife, and then a trek across rocky mountain vistas to a spiritual waypoint and marker for fellow travelers. Sometimes, these events are interpreted concurrently, or in a debrief between the passengers immediately following, but other times there is no verbal explanation whatsoever. Often, the dramatic impetuses for a moments like the meal shared between the guests and the Mongolians are guided by an unspoken, cross-cultural mirror exercise.

The notion that what you’re seeing has been conceived and rehearsed communicates an intentionality that refutes austerity and discourages passive viewing. Engaging with another culture cannot be objective or unbiased: that is the core of every Ottinger film. Her documentary The Korean Wedding Chest opens with a voiceover proclaiming: “Live among them and you will understand them.” The movie is a detailed rundown of the interaction between ancient practices and contemporary living in Seoul. From a meticulous shoot in traditional wedding attire to a clunky digital photo booth to a handheld tracking shot of the city streets, the camera invites us to be present in the lives of others. The film is one of Ottinger’s most loving explications of her ethos.

The Image of Dorian Gray in the Yellow Press casts this obsession with artistic voice in a darker light. The film is a black comedy, a fairy tale in which a hidden underground of elite figureheads mingle in a ballroom, covered head to toe in the newspapers they stronghold, and the gender-bent bourgeoisie observe overdubbed operas on beaches with meticulous, garish backdrops encroaching on the waves and sky. The Image of Dorian Gray in the Yellow Press is the story of people who hold imperialist, propagandistic power, hungry to impose their narratives on the rest of the world. As Dorian Gray overtakes the world’s top news organizations, it becomes a story of capitalist information powers co-opting queer imagery, assimilating in order to reinvigorate reactionary tendencies. Here that cultural bias, of which Joan of Arc of Mongolia and The Korean Wedding Chest are hyper-aware, becomes an ouroboros and a villain. 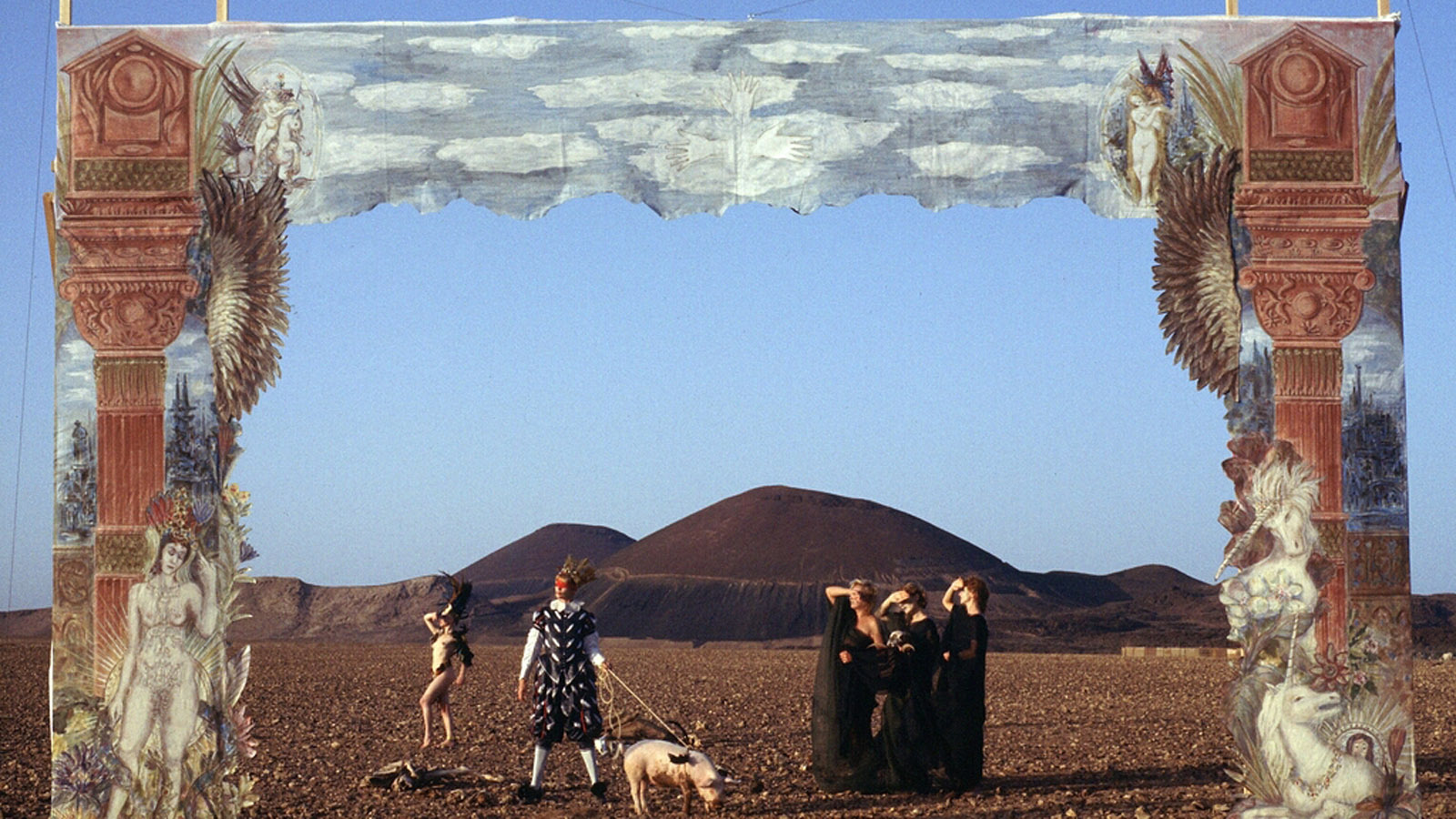 The Image of Dorian Gray in the Yellow Press

The ”stories” of Ottinger’s films, as loose as they are, are an entire cross-media history. The homages are endless: in Joan of Arc of Mongolia, one of the train car’s patrons is named Lady Windemere after Oscar Wilde’s play, a tragic figure finally freed from the confines of her melodramatic beginnings and wealthy insulation. (That film’s title, too, uses its reference as a misdirect, suggesting a more strictly allegorical reading than what the film actually shows us.) Dorian Gray transforms from a symbol of homosexual desire disfigured by repression into an open gayness distorted by hegemony. The eponymous figure that molts through each of the five episodes of Freak Orlando shares their name not just with Virginia Woolf’s queer-coded Elizabethean novel, but also Madame X’s lover, played by Ottinger herself in that previous film. These metatextual bonds form a giddy infatuation with shape-shifting self-discovery.

Narcissism, in Ottinger’s world, is a neutral term: inevitably, Ottinger centers herself in the art as both audience and creator. The subjectivity of her films, from the drunken surrogate of Ticket of No Return to the tourists in Joan of Arc of Mongolia, are foregone conclusions of structure. Crafting an identity as a queer woman requires constant reframing of the images presented across mainstream media every single day, and that includes the media one creates. Therefore, Ottinger’s “narcissism” is really transparency, a reverence for her inspirations and her subjects.

NARCISSISM, IN OTTINGER’S WORLD, IS A NEUTRAL TERM: INEVITABLY, OTTINGER CENTERS HERSELF IN THE ART AS BOTH AUDIENCE AND CREATOR.

The rail tracks that guide the soundstage train cars of Joan of Arc of Mongolia become the camera’s subject in Prater, her documentary about a historic, now-closed Austrian amusement park. Ottinger’s late-period works have concerned themselves with a strikingly versatile interrogation of historiography. Turning her focus to this rich and varied microcosm, from a planetarium doubling as a vanguard movie theater to a museum of sex mannequins and anatomical curiosities, Prater pushes her form to its most sporadic and fragmented.

There’s something childlike to the film’s present-tense portion, a pure and hypnotic abstract exercise with a cacophony of sounds and labyrinthine metals. Ottinger’s manipulation of the park’s archival footage proves to be something of a seance, seeing the world not as it once was, but as those who designed this miniature land of visceral voyeurism wished to present it. The ugly remnants of horrendously racist displays of the Ashanti people reappear in these archival materials. In one haunting shot, visitors pose their heads in wooden cut-outs: in one, African caricatures roast your head, and in another, two anthropomorphic pigs dressed in suits serve you for dinner. This is Ottinger at her most technically adept and self-critical, refusing to let history in all its ugliness die in the face of spectacle. 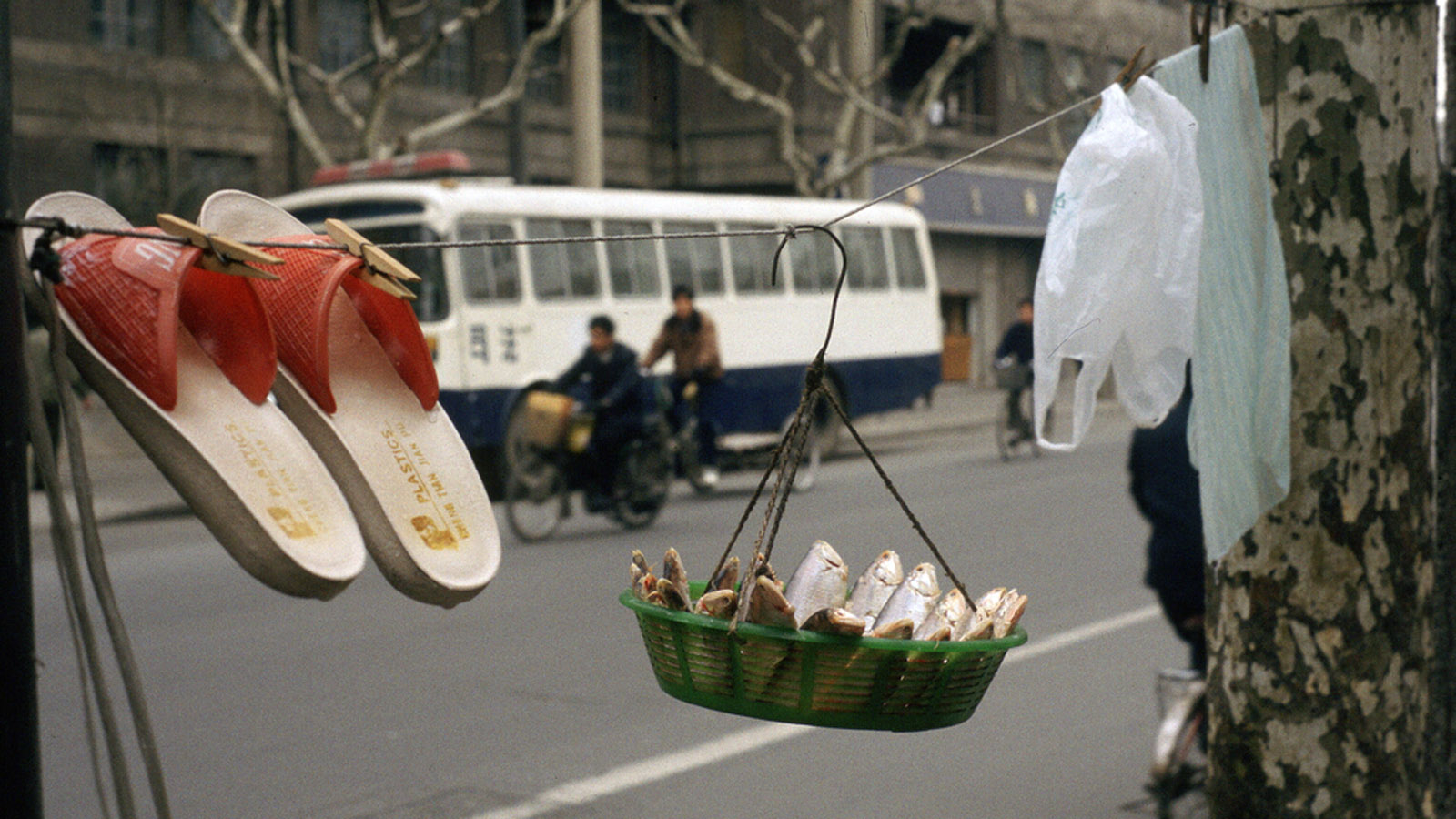 The epic documentary Exile Shanghai forms a faux-Rashomon tale of histories converging on one another. Chronicling the Jewish diaspora throughout Asia in the latter half of the 20th century, and specifically within Shanghai in the 1930s, six stories overlap, rhyme, and blur together in a massive, intimate, epic, and mundane journey. As in Kirsten Johnson’s essayistic Cameraperson, nobody alive is ever settled in the work of Ottinger; to be confined within one’s own culture is to become an actor in a production, a mouthpiece for the set design.

Here Ottinger’s fascination with travelogues comes into heart-breaking clarity. Ottinger, a Jewish woman born in Nazi Germany in 1942, has described her early years in hiding through the African art with which her father, also a painter, had decorated their house. For Ottinger, adventure was a way of searching for a place to exist as oneself without claiming it: from pirate ships to postwar benders to Austrian amusement parks, these are places with histories of their own, but now they are set adrift.

Cinema-as-travelogue is about the experience of being foreign and of carrying a strict social context exploded, and Ulrike’s cinematic travelogue is European, post-war, Jewish, and queer. It is specific, not monolithic, and it touches other cultures gingerly, with grace, love, and attention. The length and patience of her ethnography settles as an openness, an expression of respect and mutual justice. And with all that wisdom, Ottinger’s dedication to remaining so boundlessly imaginative and fun and vibrant makes her work a unique and essential pleasure.